A nation’s health and prosperity depends on its most senior public servants. Departmental Secretaries and other public body chief executives are variously entrusted with delivering essential services, regulating the economy, generating revenues or ensuring the rule of law.

But, according to the Auditor General (AG), in Papua New Guinea this group of leaders are critically underperforming when it comes to ensuring sound financial management in their own organisations:

“The concept of effective, prudent and efficient financial management is yet to be understood and performed by many Chief Executive Officers”.

The AG argues this negligence is evidenced by the fact his office keeps raising year after year serious concerns over poor accounting records, weaknesses in internal controls and non-compliance with legislative requirements in public bodies without ever observing any improvements.

The AG claims that overall the chief executives are paying insufficient attention to financial management and failing to exercise proper leadership.

The AG is recommending that it should be a legislated requirement that the contracts of Departmental Heads and other chief executives of public bodies should not be renewed where they do not ensure prudent financial management, including the submission of their annual statements.

That the AG is having to call for this to be a legislated requirement signals the failure of past governments, and government Ministers, to enforce such a simple and blindingly obvious requirement when considering the renewal of contracts.

The Auditor General’s recommendation forms part of his 2018 Part IV Report on Public Authorities, Statutory Bodies and Government Owned Companies that was presented to Parliament in October 2019.

The report paints a damning picture of financial mismanagement right across government. Mismanagement that the AG says is not only endangering service delivery but is actually getting worse.

The AG is required to report on the financial performance of 123 public entities, comprising 80 public bodies and 43 government owned companies.

However, the AG is constrained in this task by the continued high number of entities that do not submit financial statements for auditing.

Financial statements are a core component of an organisation’s governance and accountability structure. It provides key information on the agency’s financial position and performance. Non-submission diminishes the ability of stakeholders to monitor performance and make informed decisions.

“Unfortunately, many organisations continue to indicate they are incapable of managing their financial affairs”

This is leading to a significant waste of financial resources and a serious lack of transparency and accountability says the AG. Ultimately these impact upon the delivery of services to the people of PNG.

Despite being legally required under the Public Finance Management Act to submit annual financial statements within four months from the end of the fiscal year, 72 entities (59%) failed to submit their 2018 statements, and 86 statements from 36 entities for 2017 and earlier years have still not been submitted. 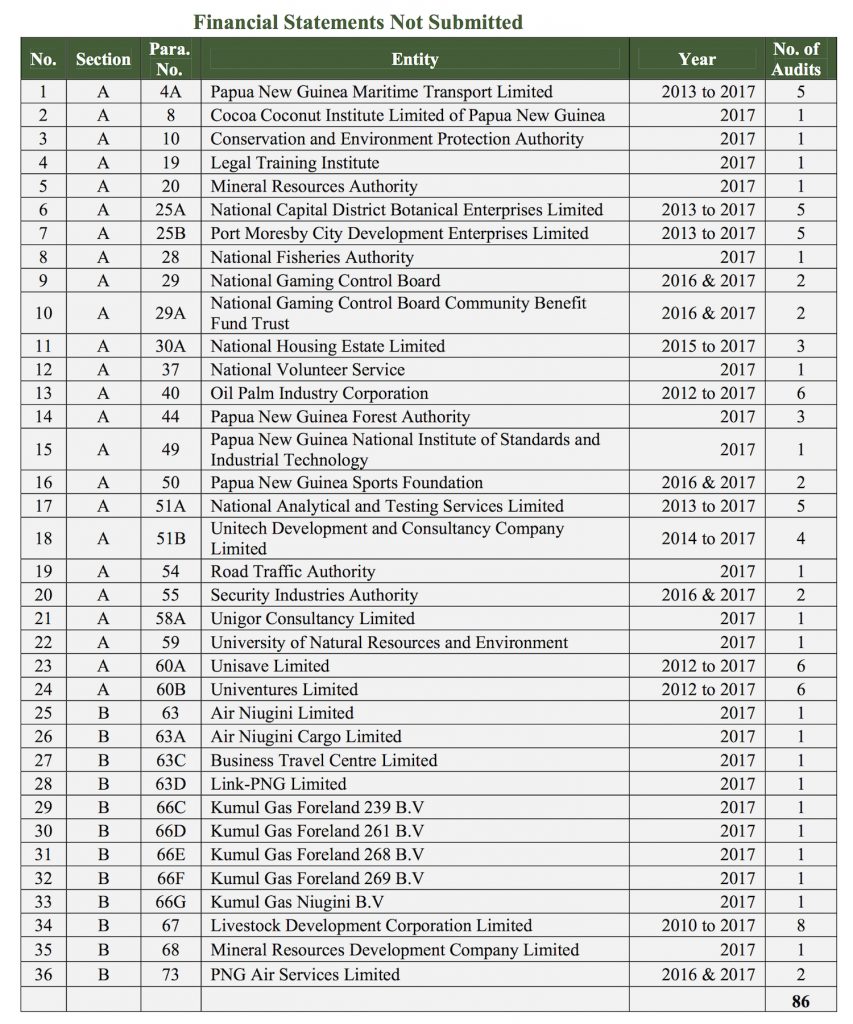 The AG notes that the situation for non-submission is deteriorating, not getting better.

The critical issues revealed by the AG though extend far more widely than just the non-submission of financial statements. For those organisations where financial statements were submitted and audits completed the AG found widespread and serious issues of non compliance.

The most serious were non-compliance with the laws regarding salaries and wages, lack of basic accounting records, lack of staff capacity and competence and ineffective internal controls.

The AG’s Report also highlights that four State-owned entities have amended their enabling Acts to exclude the AG from performing an audit and allowing them to appoint their own auditors. This, says the AG, is in breach of both the Audit Act and the Constitution.