The Auditor General’s Office is a critical organ in the national fight against corruption. A well funded and active audit office has the capacity to proactively identify state bodies where illegal activities are taking place. It can also warn government where there is a significant risk illegal activities are taking place due to non compliance with financial procedures and laws.

In its last published Annual Report the Auditor General warned his agency was being starved of essential fiscal support, which is curtailing his office’s ability to serve its essential role in the democratic system, where checks and balances are essential to good governance.

The Auditor General observes: ‘Despite my budget submission of K32 million, the National Parliament appropriated a total of K17.6 million in 2018 to the AGO through the 2018 Budget Process. This was inadequate to fund my operational requirements considering the increase in audit portfolios. As a result, the conduct of audits was mainly restricted to government entities and agencies based in the National Capital; and the audits in other provinces could not be carried out because of the limited financial resources’.

In other words a large part of the nation’s public agencies are entirely off the radar. While we do not know exactly what is happening in these government bodies that are off the accountability grid, we can surmise based off those government bodies which the Audit Office is able to inspect that things are far from good (and most likely all the worse, due to their current immunity from audit).

The Auditor General’s Office aims to issue four volumes annually, looking at different parts of the public sector. Most of these volumes are behind schedule, at least in part due to the significant challenges faced in obtaining even basic documentation from public agencies, and in part due to the above mentioned financial constraints.

Last year the Audit Office released its 2019 report for public bodies, nationally owned companies, and other companies with government shareholdings. It is the most up to date report of the four volumes meant to be issued annually.

While for the most part, the Auditor General’s Office faced the litany of usual barriers, no documentation, partial documentation, or inaccurate documentation, it was possible for it to give some insight into the state of public bodies and nationally owned companies.

Lets take a look, in no particular order.

The National Roads Authority’s audit has some commentary of note.

The Auditor General observes ‘my review of the Staff Rental Accommodation revealed certain instances where rentals paid to personal companies or companies owned by spouses and related parties of the Authority’s Staff’. The audit puts the value of this rental at K1 million.

Besides being a clear red flag for potential corruption, the auditor adds ‘contract officers are deemed to be evading tax despite my recommendations to abstain from this practice in my prior year audits’. In other words rental being paid to personal companies, spouses or other family members, by their public employer is a benefit of employment – even if improperly procured –  which ought to be the subject of income tax.

‘As per the Income Tax Act 1959, this practice may be considered as tax evasion’, the Auditor General notes.

The Auditor also noted that ‘the expatriate was entitled to rent-free accommodation during his engagement per the contract. However, in addition to the rent free accommodation he was also paid K1,500 every fortnight totalling K78,000 in 2017 and 2018’. This raised the concern of potential double dipping.

Moving on to Kumul Consolidated Holdings which manages the government’s non-petroleum and non-mining assets. According to the Auditor General ‘on 26 July 2016, the Board of Kumul Consolidated Holdings approved the transfer of the Company’s investment property at a book value of K81 million in exchange for shares in Pacific International Hospital (PIH) without any proper due diligence’.

According to the audit ‘the share investment in PIH was then recorded at K9.5 million in the Company’s books and statement of financial position as at 31 December 2016. As a result, a loss of K71.6 million was recorded for the financial year ended 31 December 2016’.

In short it is asserted that Kumul Consolidated gave away a property to PIH worth near k100 million for shares initially pegged at 1/9 of the value of the property.

Turning now to the vexed question of travel budgets. The Civil Aviation Authority, according to the Auditor, has been misusing its travel budgets for political rather than agency purposes. The audit report notes:

A total of K531,309 was spent under Minister’s travel allowances account during the year. The payments from this account were mostly related to electoral business and not related to CASA’s normal operational business. I advised that costs incurred by the Minister for Non CASA sanctioned business related activities imposed additional financial burden on CASA’s resources. Therefore, I recommended that the Minister’s Office be notified of the stance going forward and that no further unsanctioned Non CASA Business travel or associated costs be allowed to be met by CASA.

Physical inspections conducted on vehicles owned by the Secretariat revealed that the vehicles were not registered with “Z” plates, breaching the Motor Traffic Regulation 1967 Chapter 243 section 19A(e)(i) … My review of the personnel and motor vehicle benefits of the Secretariat revealed breakdowns and malpractices. We noted that five (5) senior officers of the Secretariat were each provided vehicles for twenty-four (24) hours use with fuel. In addition, these officers were also paid vehicle allowances. This practice is a form of double dipping of benefits by the employees and should be discontinued.

Shifting now to some big ticket items. The Auditor General also raised concerns over contract management at the PNG Ports Corporation over the design, construction and commercialisation of the Western Side of the Lae Tidal Basin into Industrial Real Estate.

My review of the Company’s payments during the year revealed an invoice valued at K58,157,498 and paid to a contractor without any support of proper documentary evidences of the work done. This amount was a second payment whilst first payment of K75 million had been made in 2017. As a result, cumulative payments made to that particular contractor up to 31 December 2018 totalled K133.3 million

The audit also raised concerns over subsidiary agreements made by the contractor:

The Company engaged various security companies during the year under review. My review of the payments made to the security companies revealed that amounts of K3,523,376 and K1,945,511 were paid to Ranger Protection Limited and Wasman Security Services Limited respectively. However, I was not provided with the contract agreements and all relevant supporting documentations to validate the payments made

One of the worst performers was the Mineral Resource Development Company which was noted in a previous PNGi article. Table 1 summarises some of the key concerns raised by the Auditor General’s Office.

The enumerated examples above are only a small window into the issues identified in the audit.

In section E.5 the Auditor General provides a snapshot of the wider range of headlines. 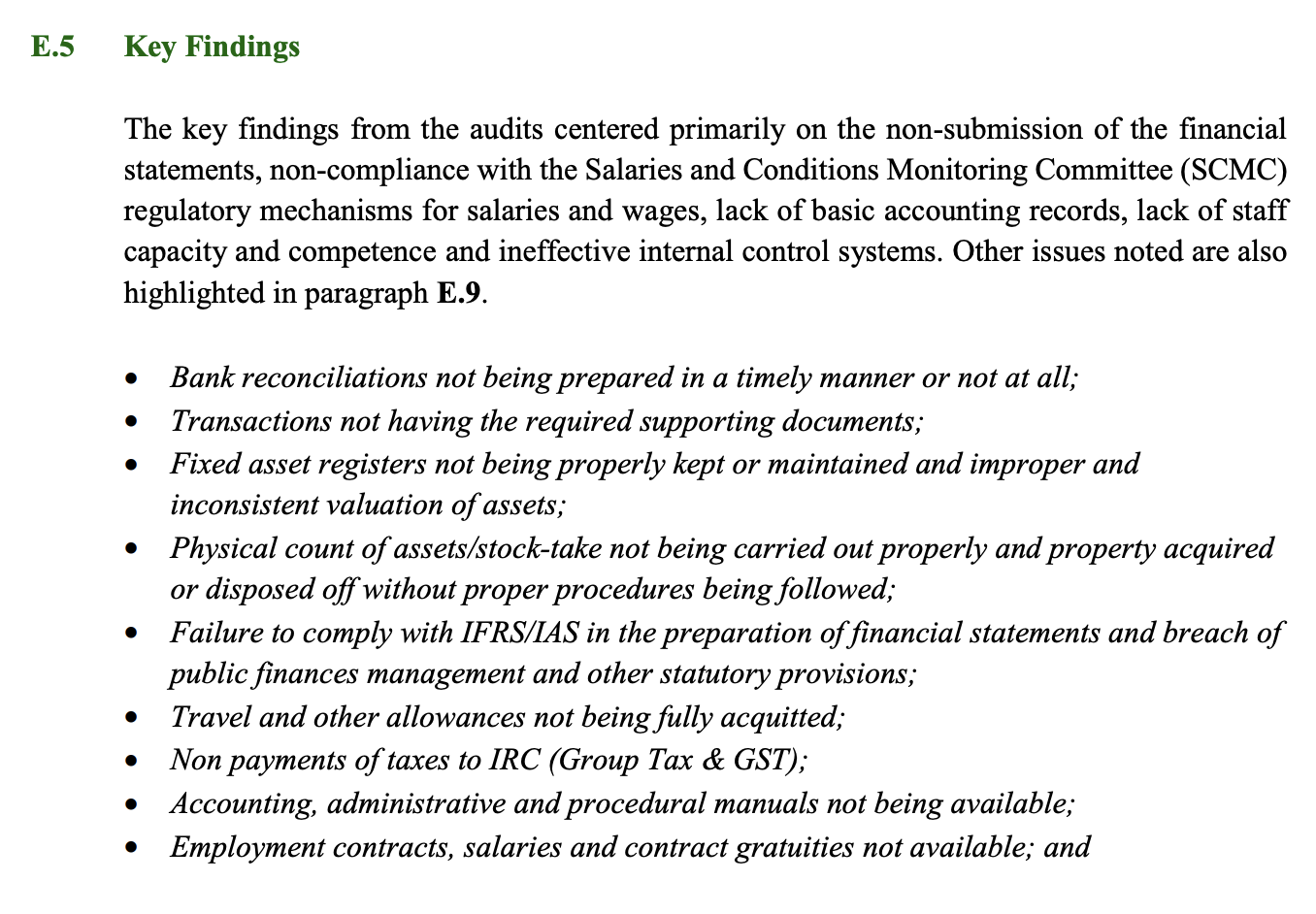 Despite the gravity of these findings, and the serious corruption risks they imply, it should not be anticipated the Auditor General’s Office will receive a wealth of resources any time soon. Turkey’s don’t vote for Christmas, as the saying goes.