The man placed at the centre of this smuggling ring by the National Court is Fu Quan He, an individual who has been in business with a senior Bougainville politician, and who has acquired prime land in Madang, to the chagrin of local residents facing eviction. 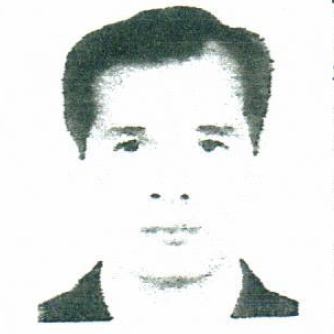 Fu Quan He’s alleged involvement came to light in Justice Berrigan’s verdict in the criminal prosecution of Runny Dau, an officer with PNG Customs Service. Dau’s job is to inspect cargo containers arriving at the international wharf on Motukea Island.

The indictment submitted by the state claims Dau received a K5,000 bribe from Fu Quan He (known as ‘Michael’). In return for this bribe, it is alleged by the state Ms Dau agreed not to inspect a 20 foot shipping container number, MSKU7477095, containing ‘contraband cigarettes labelled as double happiness’.

The indictment also alleges that Ms Dau conspired with Fu Quan and others to ‘defraud the Independent State of Papua New Guinea through the avoidance of payment of tax and customs duty for the contraband cigarettes, in the sum of  K2,847, 679.34’.

Ms Dau was found guilty on both counts. The verdict details the criminal conspiracy and points to the role of trusted state officials.

According to media reports, a PNGDF officer with the same name and of the same age, Lieutenant Richard Ule, has been indicted for the murder of Snr Inspector Andrew Tovere on 9 May 2020. Tovere was murdered in the line of duty, allegedly by Lieutenant Ule, when investigating illegal alcohol sales at a Port Moresby black market. 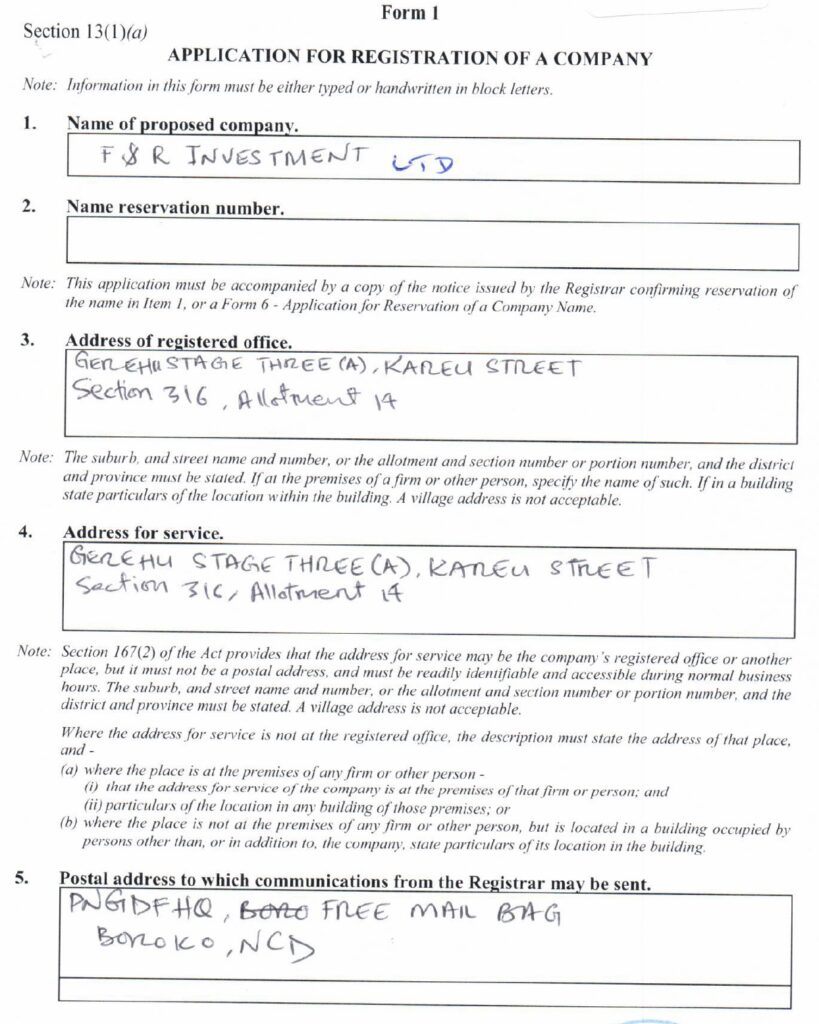 In the case of the Double Happiness cigarette racket, the crime begins on the PNG side in or around the 13 August 2018, when a man only identified as ‘Mr Lin’ went to a shipping agent in Port Moresby. Mr Lin wished to clear container MSKU7477095  imported by F&R Investment Ltd. Mr Lin claimed the ‘container contained toilet paper, plastic snack boxes and rakes, dishcloths and toilet paper to a total value of USD6,569.40’.

Based on this false information allegedly provided by Mr Lin, the shipping agent calculated that K7835.80 was owed in customs duties. This amount was paid by F & R Investment, a company part owned by PNGDF Officer Richard Ule.

Things began to go awry for the criminal conspirators when Bonny Hajaip, an auditor with PNG Customs noticed that the weight of the shipping container did not correspond with the declared goods. She calculated that the weight was exactly what one would expect for a container full of cigarettes. She advised Runny Dau’s supervisor Sylvester Komoin to inspect the container.

He did not stop the container before it left the wharf facility. Bonny then called the shipping agent to notify them that she would come to their yard at 6-mile to personally inspect the container.

Fu Quan He’s alleged insider person within PNG Customs, Runny Dau, overhead the call and convinced Ms Hajaip to cancel the inspection, claiming  F & R Investment ‘have been importing for some time and they have been compliant with all the importations and it is the same old things that they import’. Hajaip initially called off the inspection.

In return for Dau’s success in illicitly clearing the container, the court states that Fu Quan paid her K2000 near Central Waigani BSP, and a further K3000 on the night of 7 September 2018 at the Vision City car park.

Runny Dau alleges a further K60,000 was given to a senior officer with Customs Border Enforcement. Bribe money was also allegedly distributed to a second Customs officer.

After the container full of cigarettes was cleared through customs, illegally, it was transported to a premise at 9-Mile owned by Chinese national Lin Zhong.

Justice Berrigan notes ‘despite the fact that Bonny called off the inspection, the container was subsequently seized by Customs later that day and found to contain 114 cartons of cigarettes, under the brand name “Double Happiness”. The cigarettes were declared by Customs to be “unfit for consumption for smoking communities” and destroyed’.

Lin Zhong was convicted of smuggling contraband products in 2019 and fined K40,000. This would appear a derisory deterrent given the potential scale of this smuggling operation and the profits being made.

Runny Dau it appears is the only official from the state who has been convicted successfully, though the evidence submitted in this case points to a potentially expansive network of officials who are aiding and abetting foreign nationals to illegally import items into PNG, avoid customs duties, while also skating around health and safety requirements.

However, this is not Fu Quan He’s only brush with controversy.

According to the judgement of Justice Berrigan, Fu Quan He, otherwise known as Michael was the principal behind the cigarette smuggling racket.

By cross-referencing PNGi Portal data with the IPA corporate register, a business profile of Fu Quan in PNG has been generated, to gain a better understanding of his business interests and partners – although there is no suggestion here any of these partners were involved in the Double Happiness scam.

The first corporate footprint for Fu Quan is the company Yuhang Limited, which was established in 2006. The company filings tell us Fu Quan He is a Chinese national born on 18/07/71. Yuhang Limited’s principal business is wholesale and retail of general merchandise and consumer goods. The company is based out of Port Moresby. It is cited in Justice Berrigan’s decision as a vehicle Fu Quan employs to import products into PNG.

In 2011/12 Fu Quan branches out into the Autonomous Region of Bougainville, under what appears to be the lead of Chinese national Zhenxiang Fang. According to Bougainville commentator Leonard  Roka, Fang is known on Bougainville as Jason Fong. He was, Roka claims, appointed Trade Commissioner by the Momis-Nisira government. Fong is then said to have led on a broader effort by foreign business interests to get a large foothold in the retail sector in Buka Town, much to the frustration of local business people. 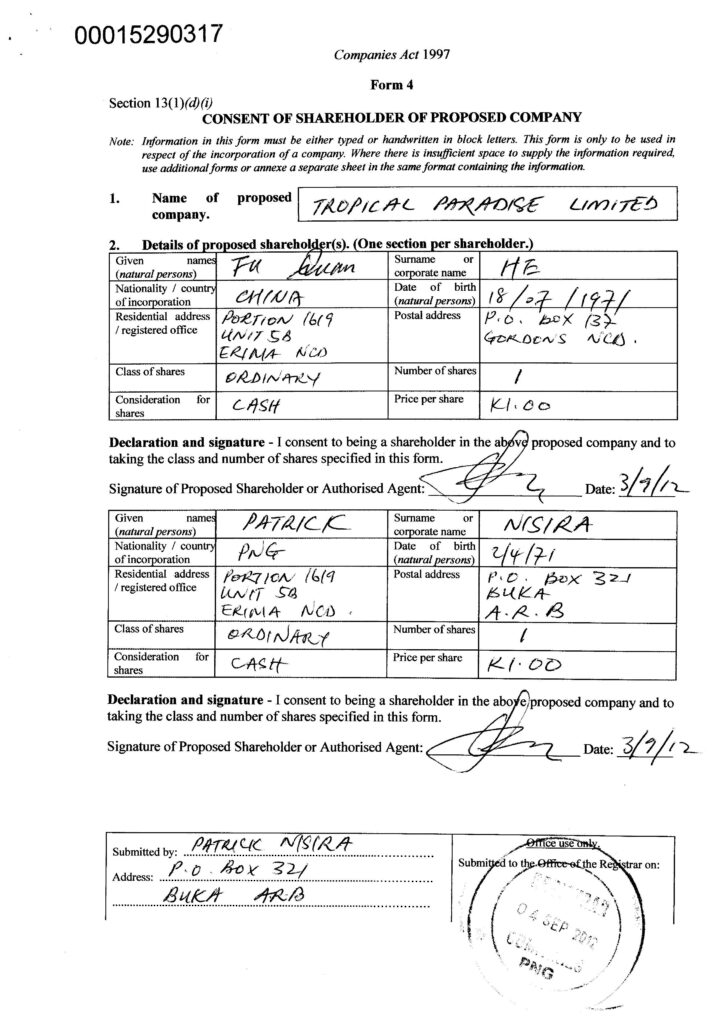 Following this business expansion into Bougainville, Fu Quan’s next and most controversial corporate footprint indicates a sizeable entry into Madang through the company Jia Hao Enterprises Ltd. Jia Hao Enterprises operates a Guest House in Madang. Its Facebook page states ‘We provide affordable housing/rooms and Land for Lease’. 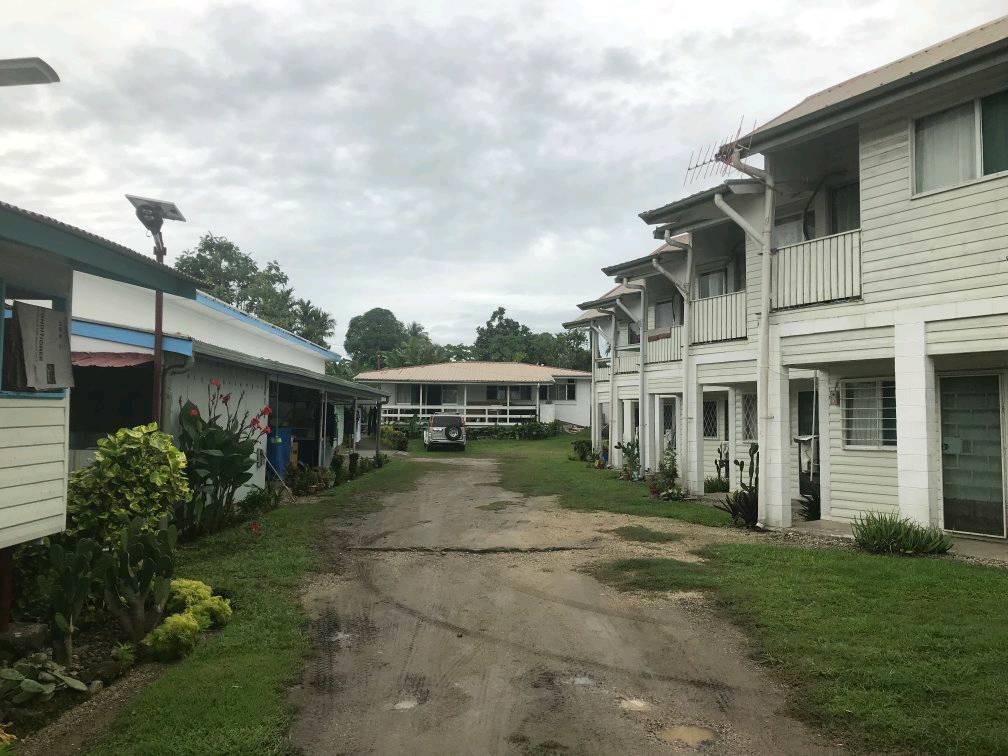 It is also implicated in a number of controversial land transactions that ended in the courts. Though to date there has been no adverse finding against Jia Hao Enterprises.

The first case involves seven plaintiffs who had been renting public housing on government land in Madang, operated by the National Housing Corporation.

According to Justice Canning the local branch manager of the National Housing Corporation, a Mr Emmanuel Diya Yama, was then granted by the Lands Minister a 99-year State Lease over the land, a move that was strongly criticised by Justice Canning.

He observed ‘prior to Mr Yama being granted the Lease, the land had neither been advertised as being available for lease nor been exempt from advertisement and the question of its allocation was not the subject of any deliberation by the Land Board’. Justice Canning adds ‘that the person granted the lease was at the time the branch manager of the National Housing Corporation, the authority that was at the time administering the land, makes the transaction seem doubly questionable’. It was deemed a case of constructive fraud.

Justice Canning ordered that the NHC residents ‘shall vacate and remove all their personal property and possessions from Section 64, Allotment 29, Madang by 12 noon on 30 September 2019, failing which the Police are authorised, from that time, to use reasonable force to evict them and remove any of their personal property and possessions remaining on Section 64, Allotment 29, Madang.’

The second case involved 17 residents living on another plot of state land in Madang, which initiated legal action against Jia Hao Enterprises’ and several other entities, for allegedly destroying their gardens and breach of human rights. The only recorded decision in this case involves an interlocutory application, it is not clear what the final outcome is of this case.

Fu Quan He is, of course,  well within his rights to enter into business in PNG, providing that he has acquired the requisite certification and acts within the law. However, if the concerning information revealed in the prosecution of Runny Dau proves accurate, it is a matter of public concern that a businessman of such poor character has acquired significant property and business interests in PNG. Of equal or greater concern is evidence that PNG customs and military officers appear to have aided and abetted this international ring which the court found to be involved in contraband goods and tax evasion.

According to the National Court these illicit activities have led to the loss of millions of kina that could be used for essential public services, while also putting the public health at risk.

PNGi attempted to obtain comment from Fu Quan He, through his accountant. No response was received to PNGi’s inquiry.