August saw former Registrar of Companies, Alex Tongayu, receive a three-year sentence, including two years in prison, for forgery. At the heart of the case in the National Court was Justice Berrigan’s finding that Tongayu forged the signature of the then Minister for Trade, Commerce and Industry, Richard Maru on two documents that appointed him Registrar of Companies and Acting Chairman of the Securities Commission.

The Investment Promotion Authority (IPA) is a critically important institution. It houses the Companies Office of PNG, the Securities Commission of PNG and the Intellectual Property Office of PNG. The IPA maintains a national registry of all companies, associations, business groups and business names in PNG. In short it is arguably the most important database for industry and commerce in the country. Its integrity underpins the integrity of the nation’s market structure.

Tongayu was effectively in charge of that registry, as well as the regulation of PNG’s capital markets.

So how did the man responsible for safeguarding the national companies registry – the repository of tens of thousands of essential legal records – end up in gaol for such a staggering breach of public trust? It began with the Koitaki Plantation affair.

According to evidence tendered in State v Alex Tongayu, after five years of working together, Richard Maru and Alex Tongayu had a disagreement over irregularities in the IPA filings relating to the sale of the company holding the 5,000 hectare Koitaki Plantation in Central Province.

PNGi has previously reported on the history of this plantation and the multiple irregularities and shady characters involved in its 2016 sale, which Maru referred to in Parliament as “very suspicious” and potentially a “massive fraud”.

It appears that Maru had expressed concerns about the IPA’s registration of the sale to Tongayu. In August 2016, he wrote to the IPA Managing Director expressing disappointment that he had not yet received a response from the Registrar of Companies setting out the legal basis upon which the IPA had allowed a change in the plantation’s ownership. The Prime Minister’s office and the Board of the IPA all became involved in the ensuing disagreement about whether the documentation relating to the plantation sale was in order, and what to do about the company’s registration.

Claiming he had not received the requested information regarding the sale, on 19 October 2016, Maru revoked Tongayu’s appointment as Acting Chairman of the Securities Commission. Further correspondence between Maru and Tongayu followed, including threats by Tongayu that he would leak Maru’s correspondence on the Koitaki affair. Tongayu challenged his removal as Acting Chairman in the National Court.

In March 2017, Maru then revoked Tongayu’s appointment as Registrar of Companies (This removal was based on a decision of the National Executive Council to remove or suspend a number of agency heads in relation to a different land deal and was not ostensibly about the Koitaki affair).

Despite being removed from these two positions, Tongayu kept his position as Director of Business Registration and Regulation Division at the IPA.

In April 2018 the National Court overturned his removal as Acting Chairman of the Securities Commission. Tongayu was reinstated in that role in November 2018.

But before all that happened, an envelope changed hands in a carpark.

On the morning of 7 June 2017, three months after he had been removed as Registrar of Companies, Tongayu met three IPA staff in the organisation’s carpark: Mark Timea, Scanning Officer, Andy Ambulu, Legal Officer, and Joshua James, Senior Surveillance Officer.

Tongayu, who was still at that time a senior IPA director, gave Timea an envelope containing the instruments that would reinstate him as the Registrar of Companies and Acting Chairman of the Securities Commission, and K500 in cash. The three staff duly delivered the documents to the Government Printing Office (GPO) and asked for them to be lodged urgently.

The instruments were published in the Gazette the same day, effectively reinstating Tongayu. Richard Maru, who was campaigning in Wewak at the time, argued that he never signed those instruments. 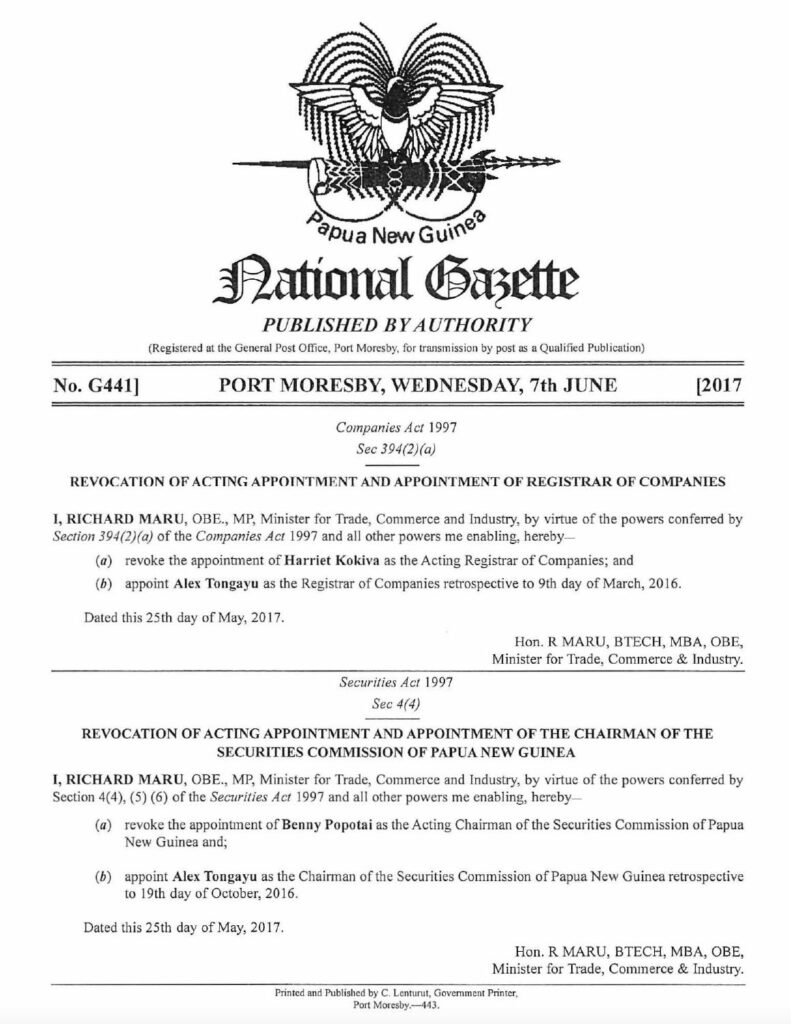 Justice Berrigan agreed with Maru, finding that Maru’s signatures on the documents were electronic signatures not original signatures. The documents were not prepared by the Office of Legislative Council or given to the Managing Director of IPA, as would normally happen with this kind of appointment. Tongayu had paid personally for the documents to be filed – by including cash in the envelope he gave to Timea – and did not claim the cost back from the IPA.

In response, Tongayu claimed that he had not forged the documents, but instead had picked them up from the Minister’s office on the morning of 7 June before delivering them to the IPA staff for lodgement. There was one problem – an earlier statement Tongayu had made in a memo to the IPA in defence of Timea, who was being investigated for his role in the affair. In that statement, Tongayu had said:

I advise that Mr Timea was not involved in the matter in any way. An envelope was floating somewhere at a carpark at Waigani and was picked up to be couriered to the office. His honest mistake was paying for the publication.  I am sure he thought he was doing it for me and the office.  This is an honest mistake any loyal staff who do for his or her boss.

Justice Berrigan raised concerns about the inconsistency between this statement – which suggested Timea had registered the documents by mistake – and Tongayu’s testimony in court, in which he acknowledged he had instructed Timea to register the documents. She was unconvinced by Tongayu’s contention that the phrase “carpark in Waigani” was actually common commercial slang for the Minister’s office. She was also sceptical about Tongayu’s claim that he had no reason to want to be reappointed to his earlier positions as they paid him no additional salary.

Under section 460 of the Criminal Code Act 1974, forgery requires a court to be satisfied beyond a reasonable doubt that a person made the false document, that they knew it to be false, intended it to be treated as genuine, and intended for someone to take action believing it to be genuine.

Justice Berrigan found that the documents were forged – documents reappointing Tongayu included electronic signatures, were not authorised by Maru – and there was no rational inference that someone else made the documents. She was satisfied that Tongayu intended the documents to be filed as genuine documents and for his reappointment to be announced in the Gazette.

I am satisfied beyond reasonable doubt that the accused is guilty of forgery contrary to s 406(1) of the Criminal Code as alleged in Counts 1 and 2 of the indictment.  This is not just a rational inference but the only rational inference in all the circumstances.  The evidence led by the State to prove each of the elements of the offences lead inevitably to that conclusion, such that any reasonable hypothesis consistent with the innocence of the accused has been excluded (para 272)

In August 2021, Justice Berrigan sentenced Tongayu to three years’ imprisonment on light labour, with one year suspended, finding that his offences “represent the worst type, or the most serious instance, of the offence under s 462(1)”, requiring strong personal and general deterrence.

Significance of the decision

Prior to the events in the case, Alex Tongayu held several important roles within the IPA – simultaneously Acting Chairman of the Securities Commission, Registrar of Companies and Director of the Business Registration and Regulation Division within the IPA. This effectively put him in charge of regulating PNG’s capital markets, including the Port Moresby Stock Exchange. He was also in charge of regulating the tens of thousands of companies registered with the IPA, with the power to register or deregister a company and the responsibility of ensuring compliance with a raft of provisions in the Companies Act 1997.

This case, therefore, raises serious questions about whether the corporate register in PNG is sufficiently rigorous to inspire the confidence of the business world. The fact that the Registrar of Companies engaged in a forgery of this scale – forging a Minister’s signature on a government appointment – raises questions about whether other less public irregularities may have flown under the radar. While this may be an abberation, other cases reported here on PNGi and elsewhere have pointed to evidence of register records being tampered with, albeit there is no suggestion Tongayu is the culprit.

The case also shines a spotlight on the chinks in the armour in the registration of official records. In registering the instruments to reappoint Mr Tongayu, officers within the GPO accepted payment of registration fees through an individual staff members’ credit card, and registered a copy document on trust that an original would be provided (see paragraphs 61-63 of the judgment). While these seem like small departures from protocol in order to keep the wheels of government turning, in practice they collectively meant that a single senior officer in the IPA could hand over a forged document and an envelope of cash and have a significant government appointment legalised without checks and balances being activated.

The Companies Registrar is also responsible for a suite of critical reforms and implementation measures under PNG’s National Money Laundering and Counter-Terrorism Financing Strategic Plan 2017-22. For example, the Registrar is responsible for ensuring the IPA takes “necessary measures to prevent criminals or their associates from holding (or being the beneficial owner of) a significant or controlling interest in a financial institution and from holding a management function in a financial institution in their sector” (p. 39). How is the public to have confidence in the Registrar’s ability to implement these reforms when the former Registrar himself was involved in serious crime?