Compensation but no criminal charges for fraudulent lease

A company owned and controlled by an Australian businessman ‘secured a fraudulent title’ to a plot of land which he then sold or leased to a second company owned by two South Koreans who invited a third company onto the land to use it during the construction of a four-storey building on an adjacent plot.

Therightful owners of the land have been awarded K260,000 in damages for trespass and financial losses after they doggedly pursued the culprits through a series of court actions, but the foreign businessmen at the centre of the fraud have not been charged by police. This is despite the fact that the PNG Royal Constabulary headquarters sits just a few kilometres from the scene of the crime.

Below we look in greater detail at the facts of the case and reveal how the foreign businessmen at the centre of the fraud are more closely linked than was revealed in court.

In 2011 a couple, James and Maryanne Waisime, were awarded a State Lease over a small patch of vacant land in Hohola. The couple intended to build a residential home on the 402 square metre plot. 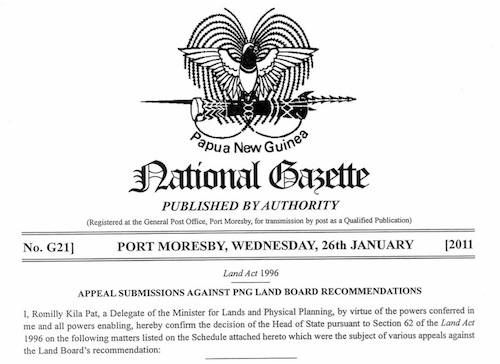 The Plaintiff’s subsequently paid all the required fees and, after some delays, on May 1, 2013, the Registrar of Titles issued them with an official State Lease for a period of 99 years commencing on 26 January 2011.

Unfortunately, during the period of delay in the issuing of the lease, a foreign owned company, Auskoa Enterprises was able to secure a fraudulent title over the same piece of land. The fraudulently issued title was then used by Auskoa to rent the property to Pacific Trade International.

The Waisime’s were completely unaware of what was happening on their land until April 2013 when Maryanne traveled to Port Moresby to follow up on the issuing of their State Lease.

Maryanne flew to Port Moresby on 28 April 2013. When she visited the property she was ’shocked’ to see that Citi Engineering had occupied the site and used it to dump soil and set up storage containers and stockpile a range of building materials.

Citi Engineering refused to vacate the site despite being informed of the fraudulently issued title and the Waisime’s legitimate lease. That was until the couple successfully secured an eviction notice in the District Court.

With their land secure, the Waisime’s tried to negotiate for some compensation for the time, costs and other inconvenience and delays caused to them and the damage to their land. The companies refused to entertain their claims. The Waisime’s therefore issued court proceedings and were subsequently awarded a default judgement against Ausoka Enterprises, Pacific Trade International and Citi Engineering.

Still the three companies failed to settle the compensation claim forcing the legitimate owners to return to court once more  for an assessment of damages.

This comprised ‘mesne profits’ of K150 per square meter per year from the date of the illegal occupation (20 December 2012) until it ended (5 February 2014). The total of K69,222.99 represented the market rent the plaintiff’s could reasonably have charged if the property had been legally occupied.

The court awarded an additional figure of K50,000 for the original act of trespass onto the Waisime’s property and the continuing trespass despite the defendants being informed of the legal title and refusal to vacate without an eviction order.

The court also awarded K86,692.80 being the costs of digging up and removing the soil and other materials dumped on the land.

Together with K10,000 for mental anguish and out of pocket expenses of K52,096, the plaintiff’s were awarded a total of K268,012.63 against all the three Defendants ‘jointly and severally’ plus legal costs and 8% interest from issue of the writ.

Five months after the National Court handed down its decision the judgement remained unsatisfied. None of the defendants it seemed was prepared to honour the court’s decision and pay any damages.

The Waisime’s therefore instituted enforcement proceedings. On 1 July, 2019 they obtained an order over the funds of Pacific Trade International held at Westpac Bank for the full K268,012 plus interest.

Pacific Trade was aggrieved that it was being forced to pay the full amount of the compensation, but rather than pursuing its two co-defendants for their contributions it appealed the early court decision to order the damages, interest and costs be paid ‘jointly and severely’ by all three companies, effectively making them each liable to pay the full amount if the others didn’t.

The decision to try and overturn the court decision rather than pursuing Auskoa Limited is particularly surprising given Auskoa is a solvent import, wholesale and retail business. According to its Annual Return for 2018, the company has 16 employees and assets of almost K5,000,000, more than enough to satisfy the Waisime’s claim in full.

Pacific Trade filed an appeal to the Supreme Court. It argued that it should not be jointly liable as it had unwittingly relied on a fake title and that the calculation of damages was incorrect and excessive.

The Supreme Court though rejected all the grounds of appeal and further awarded the Waisime’s costs of the appeal against Pacific Trade International.

The three-judge bench noted that Pacific Trade had failed to try and have itself removed as a defendant from the National Court proceeding on the basis it was an unwitting victim in the whole matter and it had failed to make any argument or give any evidence before the National Court as to why damages should not be awarded against it. Indeed it was Pacific Trade that had organised the three-defendants to engage legal counsel to defend the Waisime’s claim when it was first issued.

These failures led the Supreme Court to infer that Pacific Trade International was ‘not a genuine and bona fida party’.

It also noted the Pacific Trade had failed to vacate the property even when advised by the Registrar of Titles that they were illegally occupying the land and the title held by Auskoa Enterprises was false and had been fraudulently obtained.

They used their Supreme Court appeal to try and paint a picture of their company as an innocent victim, duped by Peter Dong Ho Kang, the man behind Auskoa Limited, into believing he had a valid lease.

PNGi has delved a little further in the records of the companies involved in this little scam to try and understand whether the Supreme Court was right to reject those claims and why the company has seemingly been so reluctant to pursue its fellow defendants for a contribution.

What we have found is that the owners of Pacific Trade International and Peter Dong Ho Kang are in fact business partners.

Pacific Trade International owns 50% of the shares in PNG Mega Energy Limited, the other 50% is owned by Auskoa Enterprises Limited, i.e by Peter Dong Ho Kang. All three companies share the same auditor, Tengdui and Associates of Mt Hagen.

Further, PNG Mega Energy was only registered in 2015. That is three years after the fraudulent lease was obtained for the plot of land in Hohola. If Boo Tae Kim and Lim Miye were really duped by Peter Dang Ho Kang and the innocent victims of his duplicity, why, three years later would they be partnering with him to set up PNG Mega Energy Limited?

In a final footnote, in the records of PNG Mega Energy Limited, Peter Dong Ho Kang lists his address as Bialla in West New Britain. In 2013, it was reported a Peter Dong Ho-Kong [spelt with an ‘o’] had been appointed to the Board of Kimbe Hospital.

This case might be the tiny tip of an iceberg in terms of the the number of fraudulent land leases issued and circulating in the country, but until the police start seriously investigating such cases and prosecuting the Lands officers and the business people involved the problem is never going to be contained.

With the clear evidence sitting in the National Court files and the link between two of the companies involved laid bare, we are calling on the police to investigate how Peter Dong Ho Kang was able to obtain a fraudulent lease and to criminally charge all those involved.