Various laws govern the conduct of limited liability companies in Papua New Guinea, such as, the Companies Act 1997. But if those laws are not enforced the corporate world is, in effect, free to operate in an anarchic environment.

Without enforcement and oversight, directors and shareholders can do what they want without fear of consequence. Partners can easily defraud partners. Criminals can use companies to set up corruption and money laundering schemes.

Concerningly, there is a growing body of evidence which indicates that the corporate registrar (Companies Office of PNG), which is housed within the Investment Promotion Authority (IPA), is failing in its oversight and enforcement duties. This is not only the result of regulatory failures, there is evidence in some cases that IPA employees are actively helping fraudsters pull off their schemes.

Rondulg Investments Limited’s primary line of business is buying and selling real-estate, sometimes referred to as flipping. Investors buy a property, fix it up, and sell it off. If done well, flipping can generate a significant profit for investors.

Rondulg had engaged in a number of such buy and sell trades, with the support of a financier, Patmilia Investments (PNG) Limited. Patmilia’s equity contribution to the real-estate venture was made through a share purchase in 2013. Not long after things went sour. 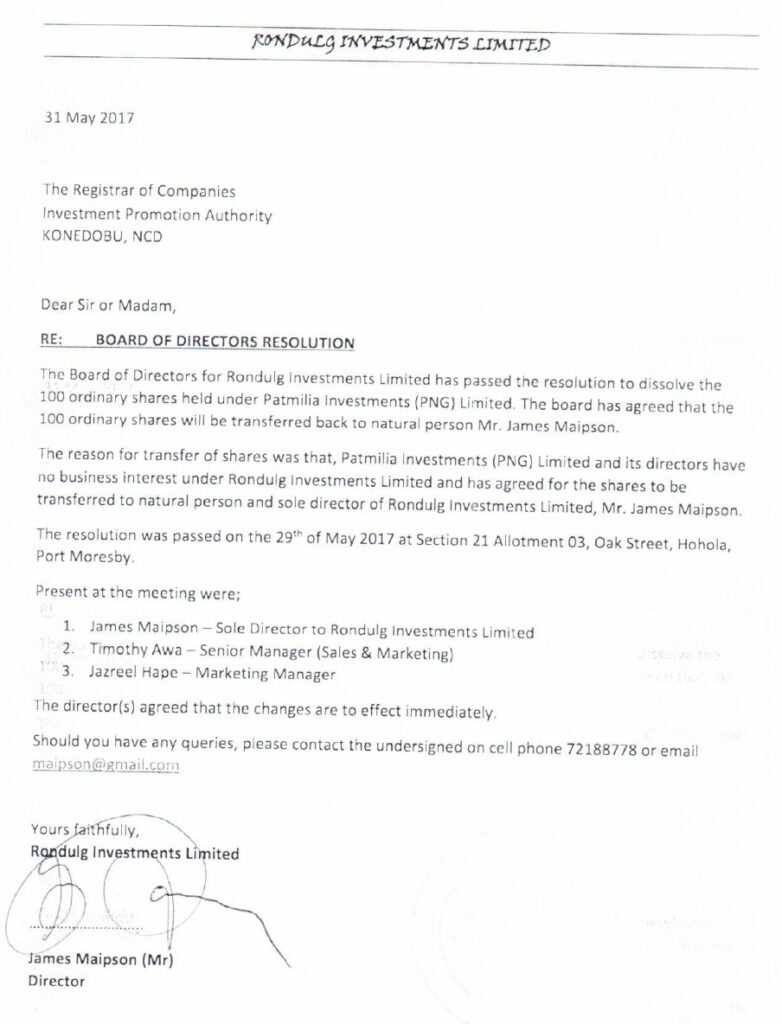 There are a number of reasons this document should have provoked concern at the corporate registrar’s office.

Present at the meeting purporting to sanction the share transfer is James Maipson, Timothy Awa and Jazreel Hape. Notable by its absence is Patmilia Investments’ representatives.  Also worthy of note is the potentially illegal nature of the directive, ‘the Board of Directors for Rondulg Investments Limited has passed the resolution to dissolve the 100 ordinary shares held under Patmilia Investments (PNG) Limited. The board has agreed that the 100 ordinary shares will be transferred back to natural person Mr James Maipson’.

It is clear under the Companies Act 1997, that a shareholder must consent to the share transfer, and this consent must be evidenced. A Board of Directors does not have the right to deprive an investor of their property.

Another part of the resolution meriting attention is the purported reason for the transfer. Maipson claims the Directors of Patmilia have ‘no business interest under Rondulg Investments Limited and has agreed for the shares to be transferred to natural person and sole director of Rondulg Investments Limited, Mr. James Maipson’. No evidence is advanced to evidence Patmilia’s consent to this arrangement.

Yet the corporate registrar made the transfer. As a result, Patmilia has had to engage in civil proceedings at the National Court to get back the shares taken from them.

In a decision dated 20 August 2019 Justice Hartshorn ordered the shares be restored to Patmilia, and awarded compensation, with the amount to be assessed by the National Court. During the assessment exercise conduct by Justice Anis, it was noted how, over two years later ,the corporate register had yet to be changed to reflect the court order. The court also noted Justice Hartshorn’s characterisation of Maipson’s action as ‘oppressive, unfairly discriminatory or prejudicial to Patmilia’.

In response to questions put to him by PNGi on this case, James Maipson claims: ‘For your information, IPA has written to Rondulg Investments LTD on the 05/02/2015 that Patmilia Ltd was a Foreign company and could not hold ordinary shares in Rondulg Investments Ltd and as such the shares were originally wrongfully transferred in the first place. There was NO FRAUD!’.

It does not appear this defence was employed in the original national court case, nor was this reason advanced in the 31/5/2017 board resolution signed by Maipson. In addition the foreign certification registry indicates Patmilia Investments (PNG) Limited has received certification to conduct business in PNG in the area of real estate activities. 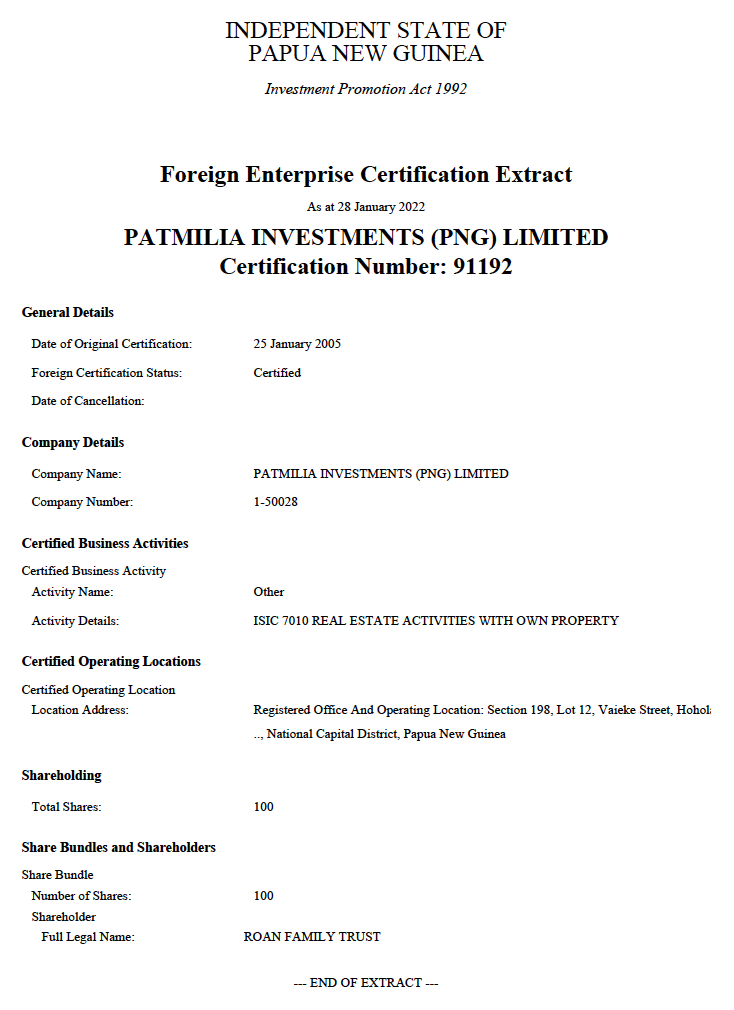 This case again raises serious questions about the rigour with which the corporate registrar oversees the companies law.

Why was this apparently illegal transaction allowed to take place at all? And why has the regulator not pursued Mr Maipson for breaches of the Companies Act 1997? It also raises the question why matters such as this are not also referred to the police for investigation, given that in the court’s opinion Mr Maipson had engineered the tort of conversion, i.e. unlawfully depriving another of their private property. It is also apparent from the court action that the Board resolution signed by Maipson solicited false information which led to the deprivation of Patmilia’s property, which may fall within the scope of a potential fraud indictment.