A confidential Cabinet paper signed by Prime Minister Marape has been leaked and exposed by The Australiannewspaper. The NEC submission reports on a ‘novel’ drug treatment discovered by a team of Port Moresby researchers. The paper claims the team have cracked the global holy grail and discovered a cure for COVID-19.

For the more sceptical and sober reader, this bold claim may have already raised an eyebrow. Perhaps even more incredibly, this discovery it appears was not  made on the basis of months of rigorous laboratory based research. Instead, the discovery was made on the basis of a desk based analysis of 30,000 generic drugs, from which 10 have been selected. In combination they will evidently rid the world of the COVID-19 scourge.

The paper seeks funding from the government to procure this drug combination and begin clinical trials in PNG, through a private company Niugini BioMed Limited. The company was hastily set up in August by the team of researchers behind this alleged discovery (so hastily they initially spelt Niugini wrong).

While the research team are tight lipped about their revolutionary drug therapy, the NEC paper confirms one political leader has been entrusted with the secret. On 4 September, the NEC paper reports, ‘the team revealed the names of the COVID-19 drugs to the Prime Minister at his parliament office’.

According to the paper this trial will ‘save a lot of people in our country and the rest of the world’. It also suggests this breakthrough will situate PNG as the global supplier of this coveted COVID-19 cure.

While scientists across every continent have been working day and night in huge teams boosted by tens of millions in funding, all to find the coveted COVID cure, a newly established local company in PNG has cracked it first through some desk-based research. To take this incredible feat to the next level the team is asking for K10.2 million from the government.

This is a bargain if the miracle cure is in fact effective in the fight against COVID-19.

This is a scam if the cure is either a hoax, or a flimsy claim without any serious scientific backing.

[Update 30 October: The Niugini Biomed company has convened a press conference. At it they disclosed the methodology which has allowed them to make this ‘miracle’ discovery that has eluded so many other research teams around the world: ‘Nations and pharmaceutical companies are pumping in hundreds of millions, even billions of dollars to find a cure. And for us I can tell you how we found a cure. God … God was able to give us this revelation’]. 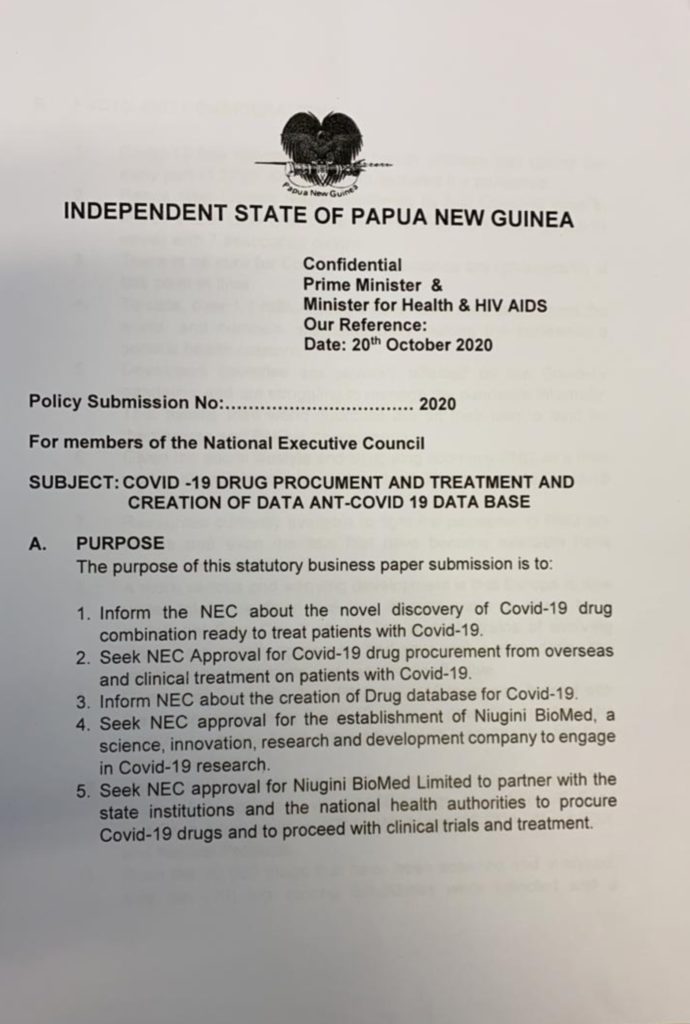 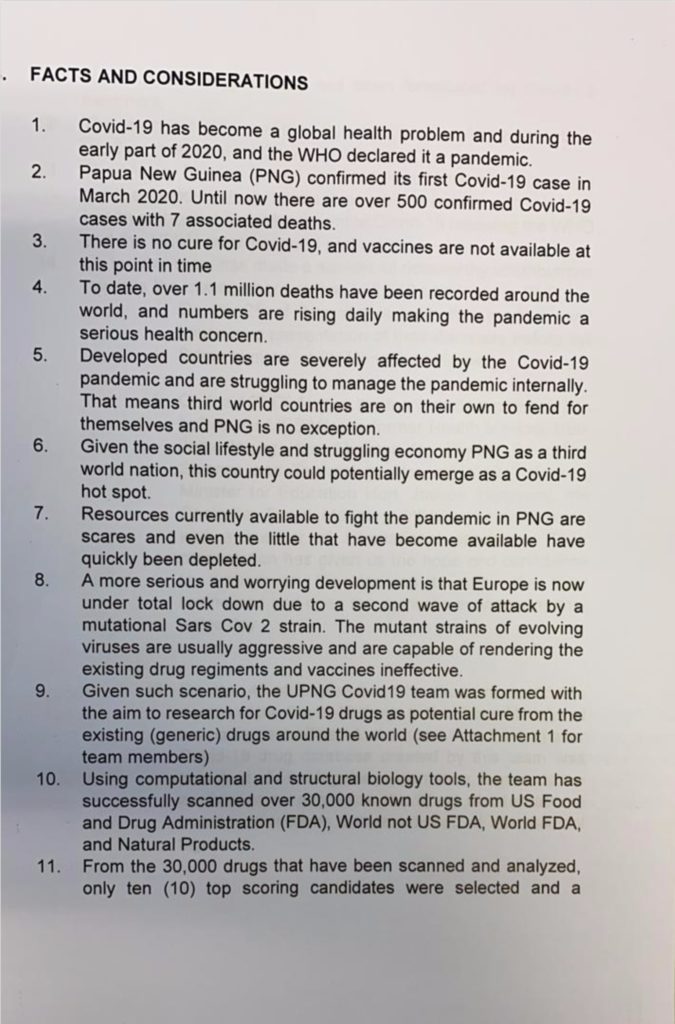 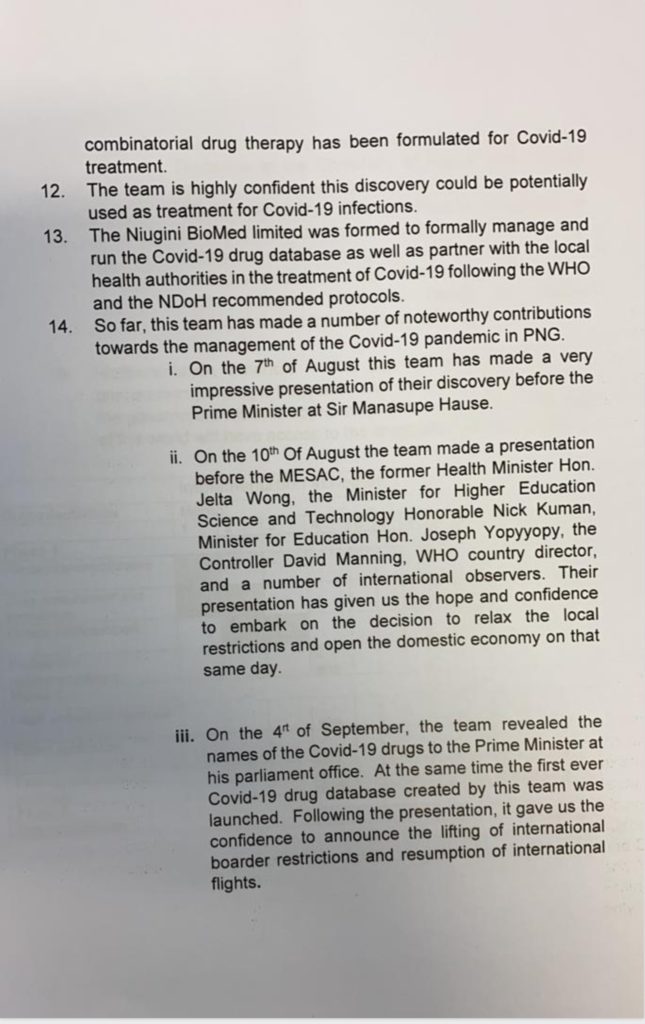 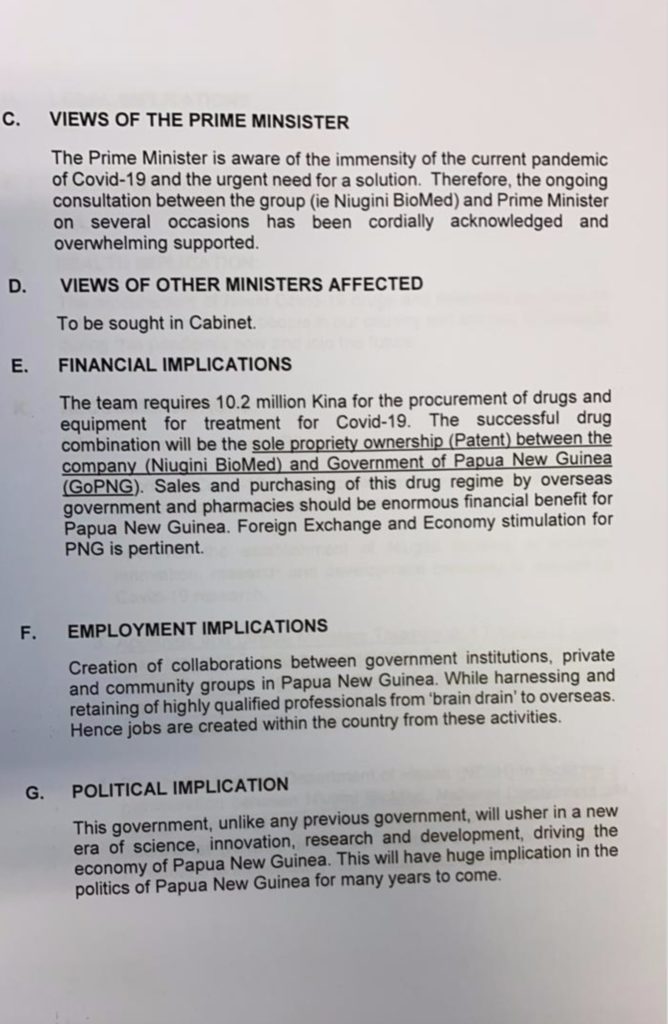 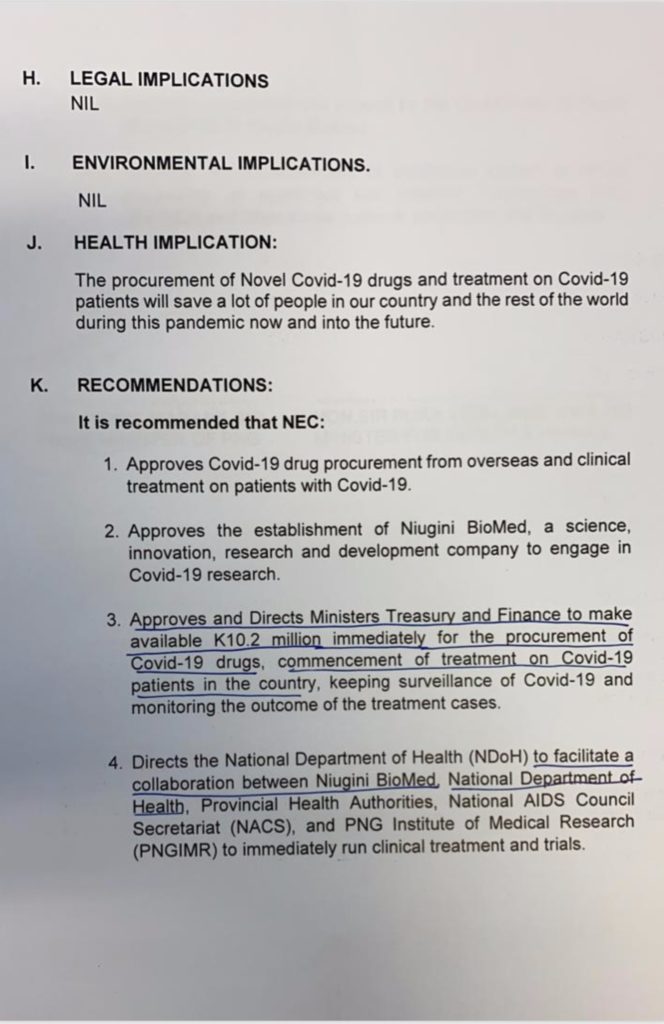 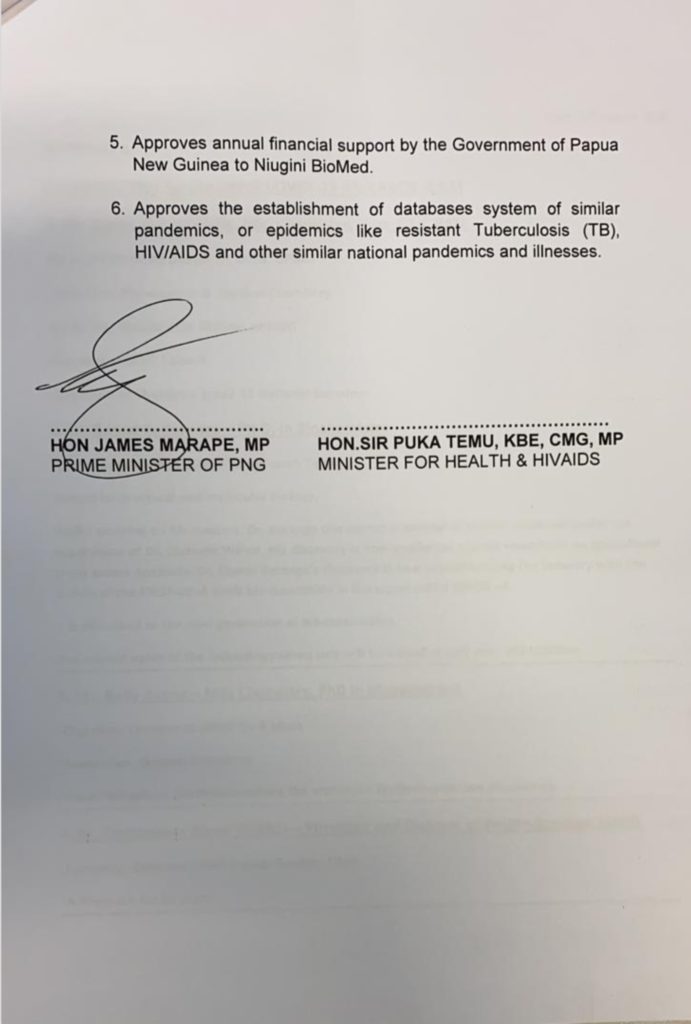 Looking into Niugini Biomed Limited’s corporate filings, the company registration documents were submitted by Filipino national Belly Asong. He is also a director, treasurer and shareholder in the company. Asong appears to be a chemistry lecturer at UPNG’s School of Natural and Physical Sciences. There is no record of Asong publishing peer-reviewed publications in top scientific journals, the profile one would expect for an individual involved in this holy grail of medical discoveries. In fact his own academic profile only lists one publication.

The Chairman, CEO and largest shareholder of the company is Dr. Bomai Kerenga. According to a social media post Dr Kerenga obtained his PhD last year, ‘Dr Kerenga’s research involve manipulating plant genes, clone and express these genes to produce superior protein molecules that can potentially be applied in both agriculture (crop protection) and clinic (drug discovery)’.

His Deputy CEO is Tony Lupiwa a researcher manager at the National AIDS Council Secretariat. 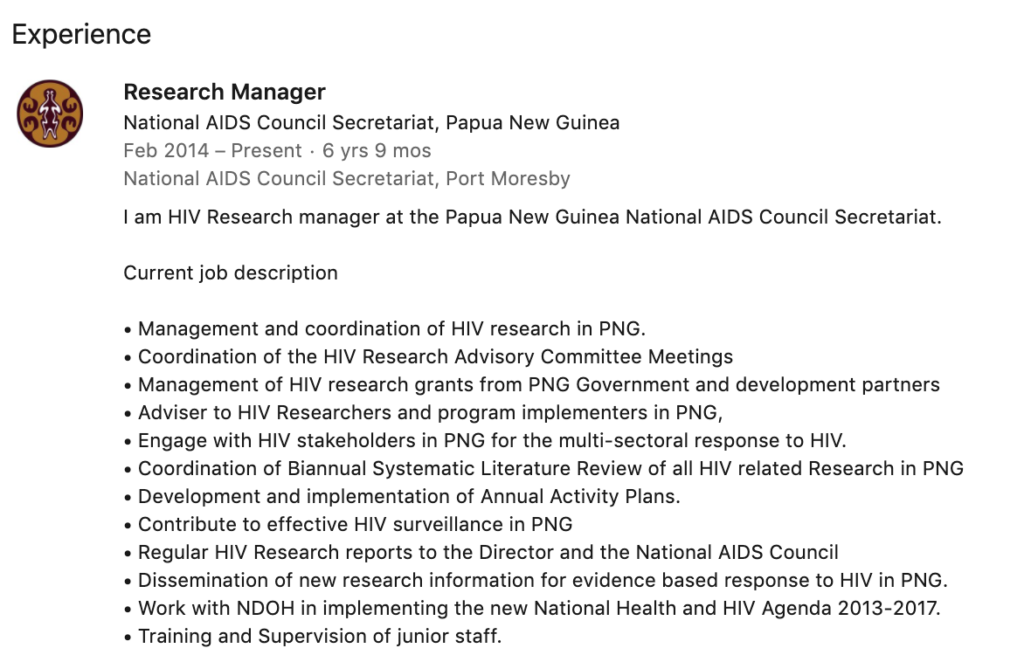 This country has many  fine minds, who do not get enough recognition or support.  PNGi in no way wishes to demean the country’s hard working researchers and scientists. But we also know our researchers have never had the same opportunities or resources to develop a competitive research culture, with so much public money lost to waste and misappropriation.

Given the best funded and most well resourced centres of medical research in the world have yet to crack the miracle cure, it would appear fair to treat with some degree of scepticism a Cabinet paper claiming a COVID cure has been developed here by a small research team through a desk based study of generic drug combinations, especially when it involves a claim for K10 million of public moneys.

Time will tell if this is a grift, or a landmark discovery that will make Papua New Guinea the toast of the world.