While governments are spending huge amounts to fight the virus, and even more staggering amounts to bail-out businesses, the controls on that expenditure have rarely been as relaxed.

Yet the fight against corruption has never been more important as every toea saved can make a difference in saving lives.

This means it is vital that every decision taken by our political leaders, public servants and business leaders must be transparent and accountable.

To that end, a Department of Health whistleblower has released documents via PNG Blogs that ask serious questions of decision making processes and spending to counter the threat of the virus in PNG.

The documents, which we detail below, appear to show that Health Minister Jelta Wong has been directing the Health Department to make large payments, amounting to hundreds of thousands of Kina, for personal protective equipment and testing kits completely outside normal government procurement processes and, in some cases, to companies with no track record in the health industry.

The Minister has denied any wrongdoing, and claimed all proper procurement processes have been followed. However, he has not denied the authenticity of the letters appearing to come from his office. Wong has characterised his instructions as mere ‘recommendations’.

Meanwhile, Noel Anjo has laid a complaint with the police fraud and anti-corruption division in relation to at least one of the payments. 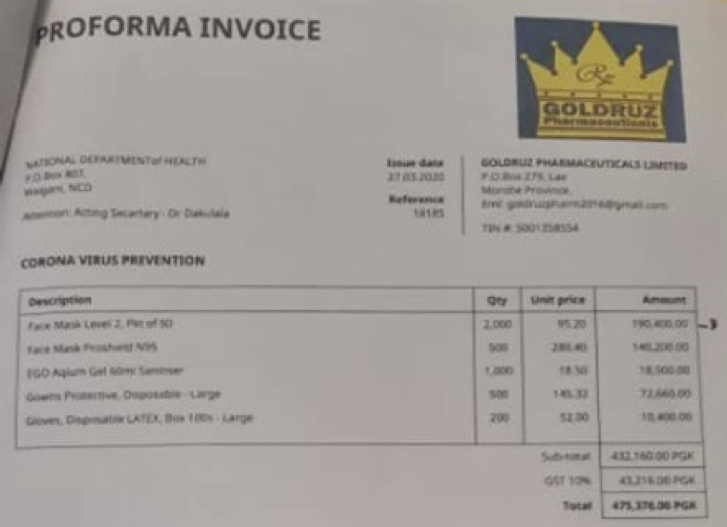 A pro-forma invoice from Goldruz Pharmaceuticals issued on 27 March for the supply of 4,200 items including face masks, hand santizer and disposable gloves and masks. The total sum payable is K473,376. 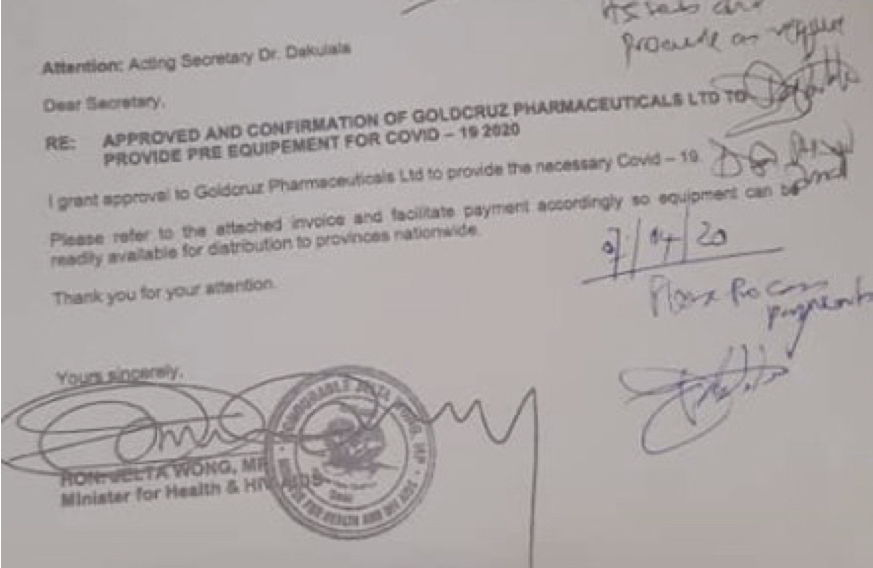 A letter apparently from the Office of the Minister for Heath Jelta Wong and bearing his signature, dated 24 March 2020, granting approval to Goldcruz [sic] to provide ‘pre equipment for COVID-19’ and instructing the Acting Secretary to ‘facilitate payment’ of ‘the attached invoice’. 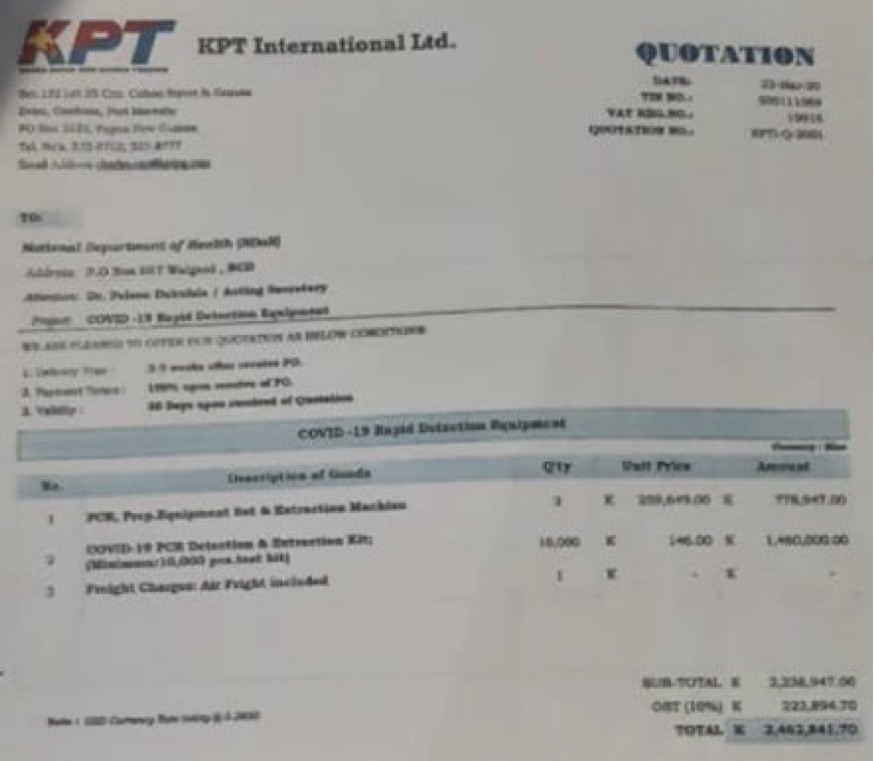 The quotation notes the person who uses the equipment will need to be trained either in South Korea or Jakarta as the supplier cannot send a trainer to PNG under current travel restrictions. 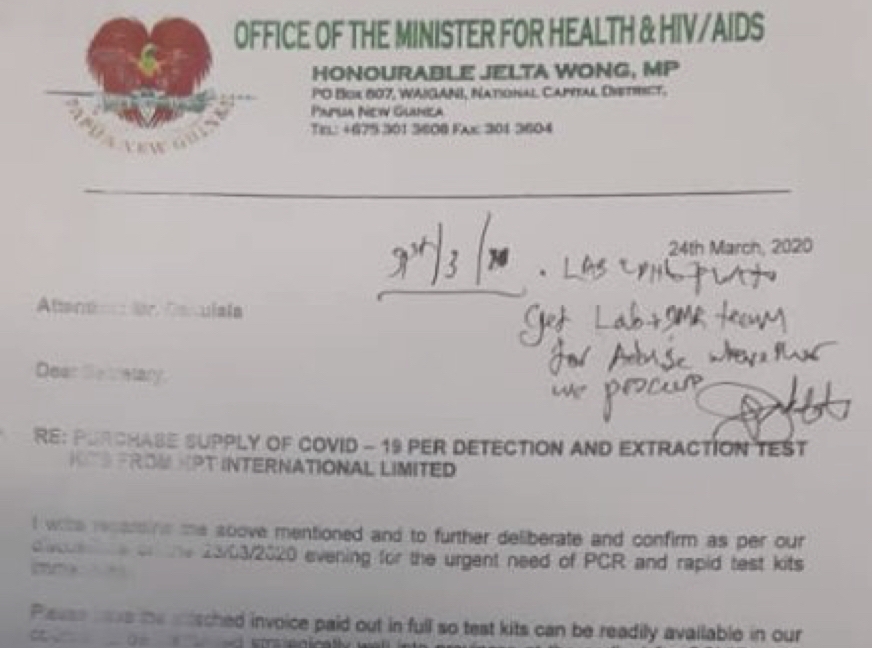 A letter apparently from the Office of the Minister for Heath Jelta Wong and bearing his signature, dated 24 March 2020, instructing the Acting Secretary to ensure the ‘attached invoice’ from KPT International for COVID-19 ‘Detection and Extraction Test Kits’ is ‘paid out in full’. 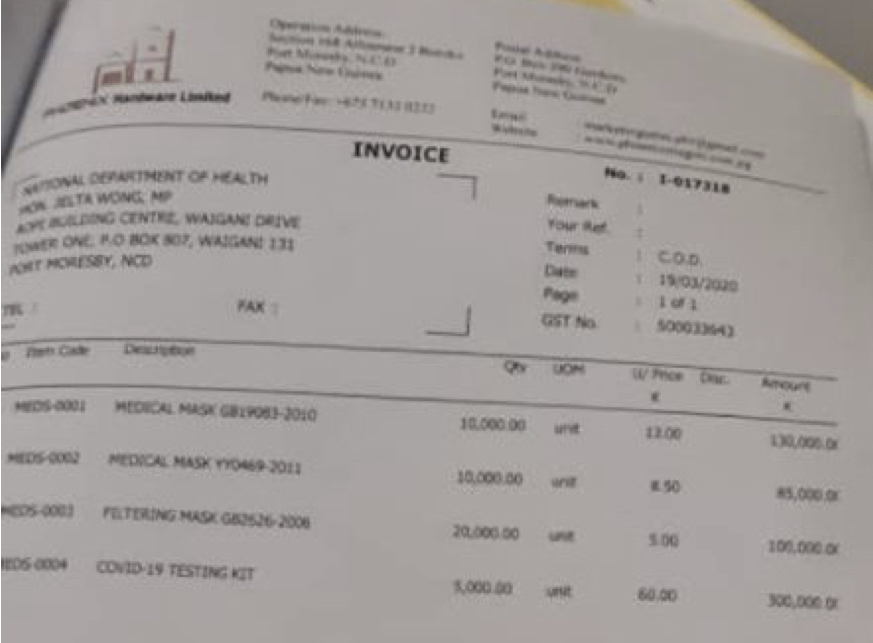 It is not apparent why the invoice is addressed directly and personally to the Minister. 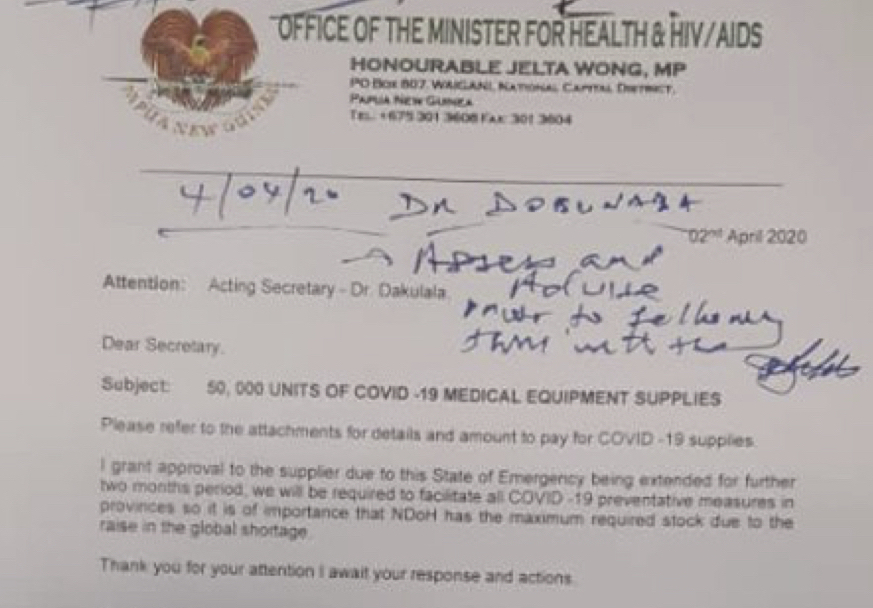 A letter apparently from the Office of the Minister for Health and bearing his signature, dated 2 April 2020, to the Acting Secretary and referring to the supply of ’50,000 units of COVID-19 medical equipment supplies’. The letter states the Minister is granting approval to the supplier (unnamed) and instructs the Acting Secretary to refer ’to the attachments for details and amount to pay’. 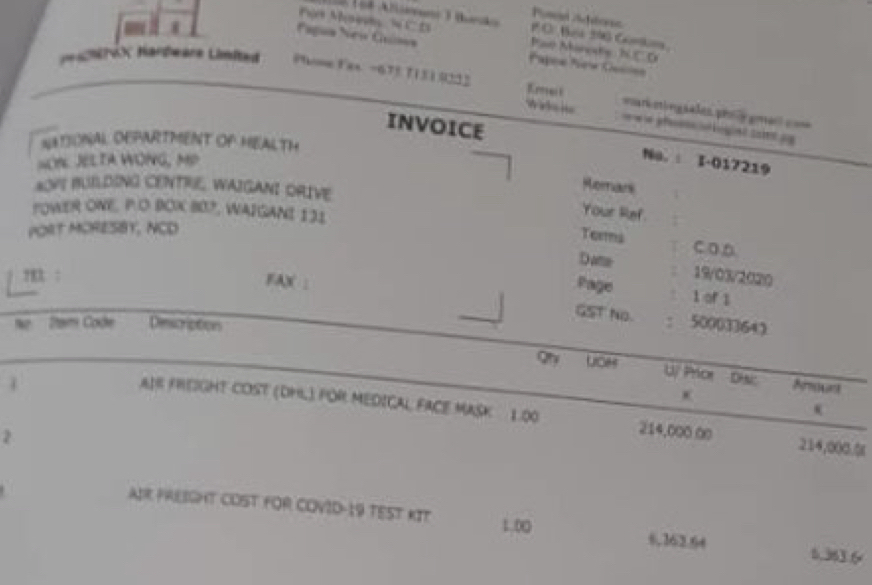 An invoice from Phoenix Hardware Limited dated 19 March 2020 and addressed to ‘National Department of Health, Hon. Jelta Wong MP’ for ‘airfreight costs’ for medical face masks and COVID-19 test kits at a total cost of K242,400. There is no explanation of how the costs have been calculated, no indication of the point or origin or destinations or the quantities or weight of the freight. 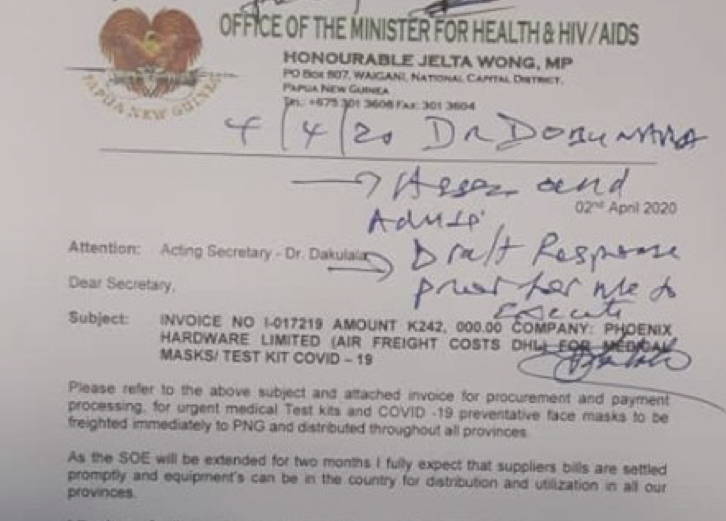 A letter apparently from the Office of the Minister for Health and bearing his signature, dated 2 April 2020, instructing the Acting Secretary to pay K242,000 to Phoenix Hardware Limited for DHL airfreight costs for medical masks and COVID-19 test kits to be flown ‘to PNG and distributed throughout all provinces’.

These payments and purchases raise many very serious questions.

The first is the Constitutional issue of the role of a Government Minister.

Section 148 of the Constitution sets out that Ministers are ‘responsible for the effectiveness and efficiency of their department and for ensuring they implement government policy and meet their goals and purposes within their allocated budgets’.

Section 148 goes on to state specifically that this ‘does not confer on a Minister any power of direction or control’.

Has Minister Jelta Wong been exceeding his Constitutional powers by apparently instructing the Health Secretary what to buy, from where and the prices to be paid?

Questions for Minister Wong include whether there was any open tender process for the purchases he has directed? Did he seek bids from a range of companies? How did he select the chosen suppliers and how did he assure himself that the prices were fair, reasonable and the lowest available? 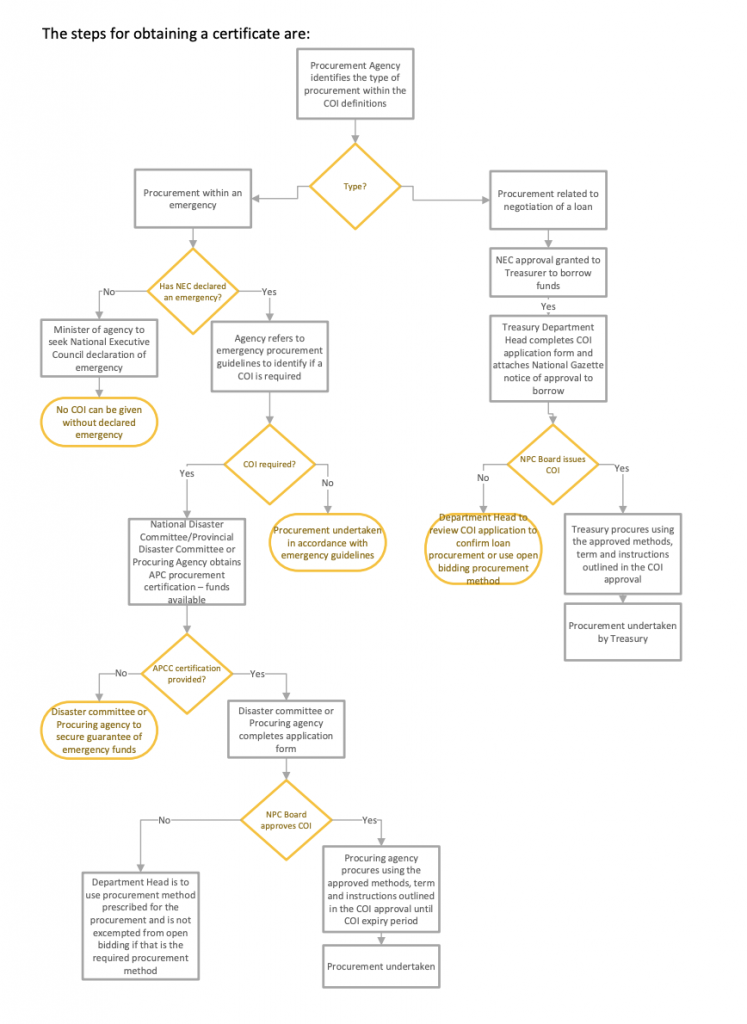 Has the Minister and his department navigated these legally required steps to secure a certificate of inexpediency for these contracts?

Thirdly there is the all important question of quality assurance.

In the past month there have been numerous reports from around the globe of substandard Personal Protective Equipment and COVID testing equipment being supplied to governments and health departments.

Compounding these risks is the fact that in PNG we have an unfortunate history of purchasing sub-standard and counterfeit medicines and medical equipment.

In the quotations and invoices released by the whistleblower there is no mention whatsoever of the items being supplied matching any international or national quality standards.

What steps did the Minister take to ensure the items he was directing the Health Department to supply were fit for purpose?

Fourthly, there is the question of who are the experts here?

Nobody can deny that the COVID-19 pandemic has created an urgent need for PPE for front-line medical staff and that health services need to be ready for any eventuality.

But the people best placed to ensure those demands are met are the experts.

According to his biography on the Parliament website, Mr Wong completed High Schoolin 1996 and prior to entering politics was a businessman in Lae (2004-2007) and Kokopo (2007-2017). According to his profile he has no higher education qualifications and no health background. 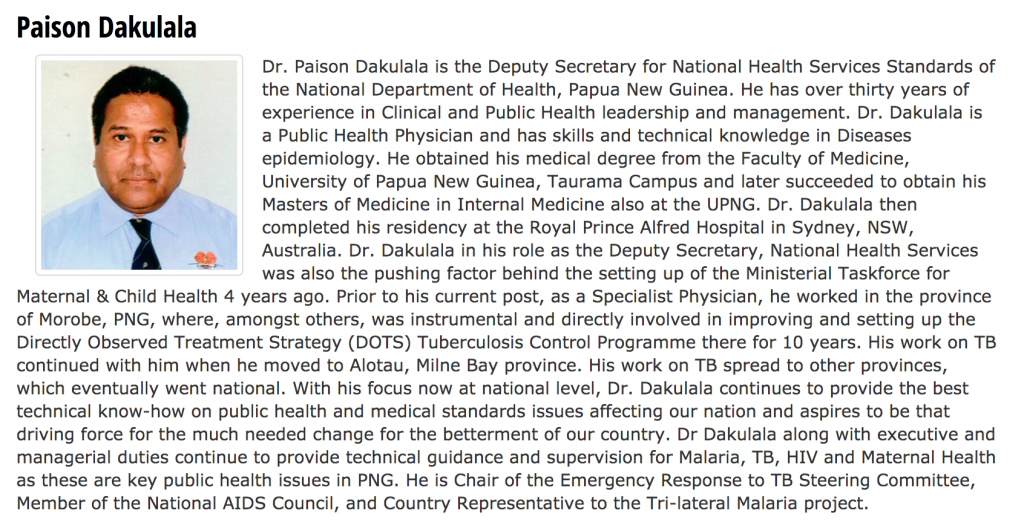 In contrast, the man the Minister is telling what to buy, from where and at what prices, Acting Secretary, Dr Paison Dakulala is a medical doctor with over thirty years of experience in clinical and public health leadership and management. He served as Deputy Secretary in NDOH before being appointed Acting Secretary.

TI PNG have already called on the government to ensure there is proper independent oversight of all spending under the State of Emergency and to ensure corrupt individuals do not profit from the government’s COVID-19 response.

The documents that have been disclosed from with the Health Department fully warrant further investigation by both the Ombudsman Commission and the Auditor General to ensure proper processes have been followed and there has been no wrongdoing by the Minister or those associated with him.

If the Minister, as he claims, has done nothing wrong, he should welcome such investigations.

The documents released by the whistleblower can be downloaded as pdf files below.