The number of unnecessary deaths caused by drug shortages in hospitals and clinics continues to climb right across Papua New Guinea as rampant corruption and mismanagement in the Health Department remains unchecked.

This is despite a landmark Public Accounts Committee investigation in 2019 that promised fundamental reform of the drug procurement and distribution system. Yet despite the fanfare no substantive reform has been delivered.

The suffering being felt by families and communities is enormous. In Morobe it has been reported nine people including six children died in September ‘as a result of an acute shortage of medicines and other pharmaceutical supplies’. The shortages are blamed on the logistics company engaged by the Department of Health to deliver medicines in the Province.

Meanwhile, in Western Province a patient has recently died from malaria at the Obo Health Centre because of a complete lack of anti-malarial drugs. According to EMTV news, the health centre, which serves more than 10 villages, is in dire need of basic medical supplies including IV-fluids, antibiotics, cotton wool, plasters, and pain relief which have all been out of stock since July.

It is not just rural clinics that are suffering. In August it was reported the Angau Provincial Hospital had been without critical drugs since January. The Provincial Health CEO blames the national procurement and distribution system for the shortages. It means patients have to buy their own medicines from private pharmacies when seeking treatment at the hospital.

In April it was reported the Kiunga Provincial Hospital was in similar dire straits, suffering a lack of basic medicines such as Amoxicillin, pain relief and anti-inflammatories, Subutamol inhalers, IV-fluids and oxygen. One baby died because the hospital’s only incubator was already occupied.

The Western Highlands Provincial Health Authority has also reported repeated drug shortages dating back to 2019, affecting Mount Hagen hospital and district clinics. According to the Provincial Health CEO similar problems were encountered in 2015 and 2016, but the same failed systems are still being used by the Health Department.

Of course none of these issues are new. As far back as 2002, the Australian government had to step in with K20 million in emergency funding to address a nationwide drug shortage. Australian support ended though in 2013, after the controversial decision to award a K71 million drug procurement contract to Borneo Pacific.

In 2017, PNGi published a three-part investigative series titled ‘Profiting From Sickness‘. It exposed the abusive commercial transactions and flawed bidding processes that leads to the circulation of overpriced and sub-standard medical goods.

In 2018, PNGi further exposed the government’s failure to implement reforms recommended in its own special audit of the procurement and distribution of drugs and other medical supplies. The audit revealed widespread failures throughout the medical supply and distribution chain including high-levels of corruption, fraud, overpayments, delays and a complete lack of enforcement of contracts despite dismal performance failures.

The audit included details of corruption levelled against the Executive Manager Corporate Services, Paul Dopsie. In 2017, the Managing Director of a logistics company engaged by the Department of Health, alleged his company had paid K265,500 to Mr Dopsie in order to facilitate contract payments. The audit found the Health Secretary had not investigated the complaint nor referred it to the Department’s internal audit division. The audit recommended Mr Dopsie be immediately suspended and a full investigation be conducted.

In March 2018, PNGi compiled this grim assessment of the state of the health service:

Regular shortages of medicines and other medical supplies have created a dire situation in rural areas according to UNICEF. In January it was was reported pregnant mothers in Lae were having to buy their own vicryl stitches for caesarian operations, while 24 children died in Morobe without access to medicines or health care and, in February, 10 infants died in one outbreak of whooping cough because of a lack of immunisations. Health workers say there is a chronic shortage of medicines, and some remote areas lack any health services. As a consequence, it is said patients are forced to buy back market drugs from unlicensed sellers or seek ‘backyard’ cures. Patients are also being turned away from some hospitals according to media reports while health centres are being closed, a situation the shadow health minister has described as ‘an act of genocide’ and a crime against humanity.

In the face of all this appalling publicity, in 2019 the Public Accounts Committee announced it would conduct public hearings to investigate the procurement and distribution of pharmaceutical drugs.

The nation was transfixed by the hearings. After 20 years of complaints, scandals, shortages and unnecessary deaths, we were finally to hear the evidence of what had gone wrong and the PAC was going to issue a set of recommendations that would sort out the problems once and for all, or so we all feverishly hoped.

Among the many witnesses to give evidence, the committee heard from Harupa Peke about the bribes he maintains he gave to Paul Dopsie in order to get payments processed under his firm’s drug distribution contract. The allegations made headline news. 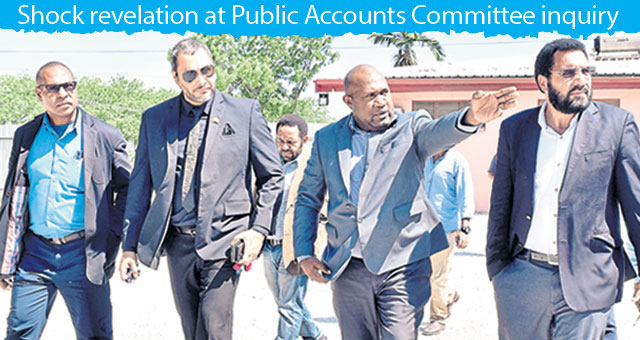 The National newspaper the day after the PAC heard evidence of bribes paid to Paul Dopsie.

Dopsie, chair of the DoH technical evaluation committee, was also questioned by the Committee on how his committee had approved a K25 million contract awarded to another logistics company. The contract included K689,000 for airfreight costs and K287,000 in sea freight costs for distribution of drugs within the landlocked National Capital District.

The negative publicity regarding Mr Dopsie was overwhelming. More than two-years after receiving the initial complaint against him, the Department Secretary, Pascoe Kase announced Dopsie’s suspension on full pay pending a police investigation into the bribery claims heard during the PAC hearing.

Paul Dopsie and Pascoe Kase as pictured in The National in 2019.

While the Public Accounts Committee’s full findings and recommendations have never been made public, according to media reports the committee uncovered ‘an organised syndicate involving senior health staff and contractors’ and ‘gross incompetence and lack of transparency in the Medicine Supply, Procurement and Distribution (MSPD) Branch of the Health Department’.

The committee recommended all medicine distribution contracts be taken away from the private logistics companies and be awarded instead to PNG Post – which, after all, has the most comprehensive and best established distribution network already in place. According to the PAC ‘none of these shortages would be taking place if the recommendations were implemented by the government’.

Yet that recommendation has been ignored and the drug shortages and unnecessary deaths are still continuing.

It is also reported that the National Court has now ordered Paul Dopsie be reinstated to his position as Executive Manager Corporate services. This return to duties is in accordance with a decision made by the Public Service Commission in November 2020 to reinstate Dopsie. However, the media report should be regarded with a note of caution.

The report of Dopsie’s reinstatement by the National Court was published just six weeks after Dopsie was granted leave by the courts to judicially review the failure of the Department of Health to implement the the previous PSC decision. Six weeks from the grant of leave to full trial is an exceptionally  quick turnaround, given the well known court backlogs. Secondly, the quotes from the judge found in the media report can all be found in the court’s leave decision.

Whether or not the media report is accurate, the fact remains the Public Service Commission has recommended Dopsie be reinstated and no criminal charges have been laid against him.

As the Post Courier newspaper recently remarked, the Public Accounts Committee inquiry “has had nil effect” while people “need to be imprisoned as lives are being lost as a result”.

The nation’s Constitution includes a clear and comprehensive clause on the public’s right to information. The Public Accounts Committee should immediately publish its full findings on the Department of Health and pharmaceutical procurement and distribution. It is clearly only the public that has any hope of holding the government to account for its failures.