Papua New Guinea has finally criminalised the trafficking, possession and manufacture of hard drugs with the passage of the Controlled Substances bill through Parliament. Those convicted under the new law could face life imprisonment or a K2 million fine.

Fortunately, for one alleged Australian drug lord, the new law has come too late to put him behind bars for life.

On November 16, less than three weeks before the passage of the new law, Australian Jamie Pang was arrested for allegedly operating a clandestine meth lab at the Sanctuary Hotel Resort and Spa in Port Moresby where he is the manager.

Despite allegedly being caught red handed in the meth lab, Pang was not initially charged with any drug related offences as, until last week, it was believed there were no PNG laws that prohibited the production, sale or use of methamphetamine.

Although Pang has admitted a total of eleven offences related to the illegal possession of guns and ammunition that were also found in his hotel, he was initially released back in the community on K1o,000 bond to await sentencing.

“It’s a slap in the face after how much resources and time we put into investigating … and yet, we cannot take it to the court process. It’s just waste of time and resources, really, and we get no justice done to it.”

Although police have now apparently uncovered a little known declaration under the 1952 Dangerous Drugs Act that means Pang is facing new charges of making and possessing a dangerous drug, the maximum penalty he faces, if the charges are proven, is 2 years jail.

Charges under the Dangerous Drugs Act 1952 could result in 3 months to 2 years jail.

Understandably Yamasombi has welcomed the passage of the new Controlled Substances Act, but for him to describe the law change as “very timely” only underlines the question of timely for who? What was so urgent that police could not have waited another three weeks before busting Pang’s illegal operation and charging him under the new law? Especially given that police initially believed there was no law criminally prohibiting the manufacture of methamphetamine.

It is a question that is especially poignant given Pang has been on the police radar for a long time and authorities have been well aware of the deficiencies of PNG’s drug laws since the high-profile case of bungling birdman David Cutmore and his arrest for trying to fly 500kg of cocaine out of PNG in July 2020; a story that made international headlines. 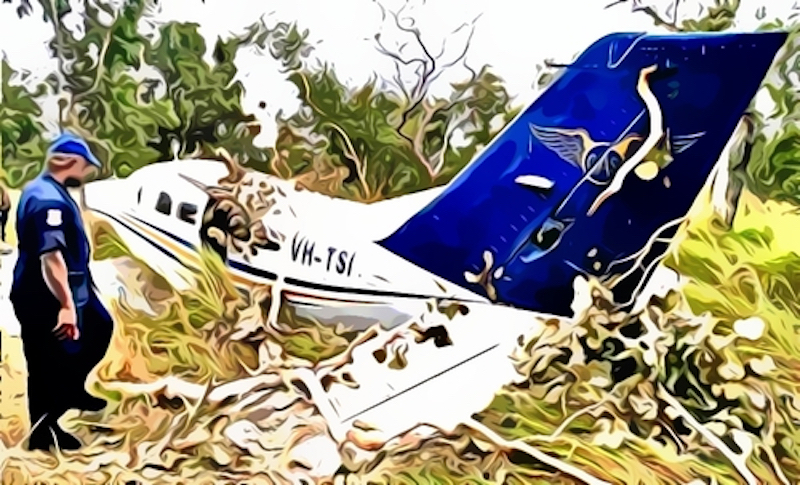 The crashed Cessna aircraft that was trying to take off with a cargo of 500kg of cocaine.

After the Cessna aircraft Cutmore was piloting crashed on take-off, he was on the run for two days before he handed himself in to the Australian High Commission. During the police search for him and the missing cocaine, the Sanctuary Hotel was one location searched by police while detailed stories were published on social media about Pang’s alleged involvement in the case. Something Pang strenuously denied at the time.

Neither Cutmore, nor another Australian, James Honey, also currently in jail accused of drug trafficking offences, will get off as lightly as Jamie Pang if found guilty.

Honey was arrested in Port Moresby on 2nd October 2021 for alleged possession of 168kg of methamphetamine, valued at K90 million. The drugs were reportedly found packed in food containers on the premises of BSA Construction, a company owned by Honey’s father, and PNG Forest Products managing director, Anthony Honey. There has been no suggestion Anthony Honey was aware of the drug importation or storage.

168kg of imported methamphetamine was allegedly found on the premises of BSA Construction, a company owned by Anthony Honey and his sons. Sean Honey has been charged with importing the drugs.

Unlike Pang, James Honey is facing a hefty jail term as he is accused of importing the drugs, which has opened the door to charges of smuggling undeclared goods under the Customs Act. Those charges carry a maximum sentence of 10-years, still, a huge discount on the life sentence he could have faced under the new Controlled Substances Act. Honey is due to next appear in court on 16 December.

Similarly Cutmore, although facing a variety of aviation, immigration and customs charges that could lead to significant jail time, has not been charged with any specific drug offences, as prosecutors soon found existing laws were inadequate. This prompted an immediate commitment from Police Commissioner David Manning to have news laws introduced.

Very fortunately for Jamie Pang, that promise to amend the law took more than sixteen months to be fulfilled.

It is a delay that we know was unnecessary, because of the independent actions of a first term MP. On November 25th, 9 days after Pang’s arrest,  MP for Goroka Aiye Tambua pushed his own Private Members bill through Parliament to amend the outdated 1952 Dangerous Drugs Act. The amendment outlawed more modern dangerous drugs like methamphetamine and introduced a maximum 40-year jail term and K1 million fine.

That a rookie MP, acting independently, was able to achieve in days something the whole Justice Department and its crusading Minister had failed to deliver in more than a year, beggars belief.

In a final twist, PNGi can reveal that although Jamie Pang appears to have avoided a significant jail term this time around, jail is somewhere that he is quite familiar with. According to police, Pang has admitted serving 18-months imprisonment in Australia for various offences including drug possession, something Pang has described as part of his ‘colourful past’.

Prime Minister James Marape, his Attorney General Eric Kwa and Justice Minister Bryan Kramer all greeted the passage of the new Controlled Substances Act with strong statements about the government’s commitment to combatting the trafficking and sale of hard drugs in Papua New Guinea.

Marape: “Law is in place… we want to be drug free.”

If that commitment is genuine, and if the questionable timing of Pang’s arrest was just a coincidence, presumably Jamie Pang will soon have his work permit and entry visa cancelled and he will be on a deportation flight back to Australia?