While the world’s attention has recently been focused on events at COP27 in Egypt, Papua New Guinea’s Education Minister, Don Polye, has been striking his own carbon deal in the United Arab Emirates.

According to media reports, Hon. Don Polye has entrusted the development of PNG’s carbon framework to the Dubai based company Blue Carbon.

Polye has described Blue Carbon as “the world’s leading carbon credit organisation” and said it “was only natural” to work with “a company as reputed and established as Blue Carbon”.

This may be a bit of a stretch.

Blue Carbon was only launched in October, which means it has had no time to build any track record of success.

The company’s stated objective is to boost investment in ‘nature based solutions’ to climate change. This is a far cry from ensuring such investments are properly regulated by national governments. Indeed, it can be argued that Blue Carbon’s aim to boost investment are best served by weak and ineffective regulations.

But perhaps assisting PNG to develop a carbon regulation framework is not really what the deal is actually about?

After all, Blue Carbon is reported to be privately owned by Sheikh Ahmed Dalmook Al Maktoum, a member of Dubai’s ruling family.

The Sheikh’s private portfolio of companies are focused on infrastructure development and energy projects. Dubai is also one of the seven emirates that make up the UAE, the worlds third largest oil producer. The UAE says it intends to become carbon neutral by 2050 – a target that will require a massive investment in clean and renewable energy and, presumably, carbon offsetting. The UAE will also be hosting the next round of COP negotiations in 2023, and is already working intensively to “launder its international reputation‘ ahead of those meetings.

That Blue Carbon’s real interest may lie beyond developing a carbon framework from PNG is clear to see if we look beyond the headlines. Media reporting reveals that under the deal signed by Mr Polye, Blue Carbon will also “carry out research activities and develop initiatives for the development of carbon emission reduction projects in the forestry sector in PNG”.

This activity goes beyond the scope of an agreement to help develop a regulatory framework but does reveal why an extremely rich oil producer and well connected international investor is so interested in PNG.

It is Blue Carbon CEO, Josiane Sedaka, who really gives the game away. She says the company intends to

Whatever it is that Mr Polye has signed away in Dubai, there are also questions to be asked about other aspects of the deal.

Firstly, why was it the Minister for Education who was in the UAE to sign the deal?

Was Mr Polye representing the PNG government with full approval? Has the deal he signed been vetted by the Solicitor General and approved by the National Executive Council?

A second concern centres on a photograph taken at the signing ceremony in the UAE, which shows Don Polye flanked by Nick Roniotis, a man described as PNG’s ‘Honorary Consul’. 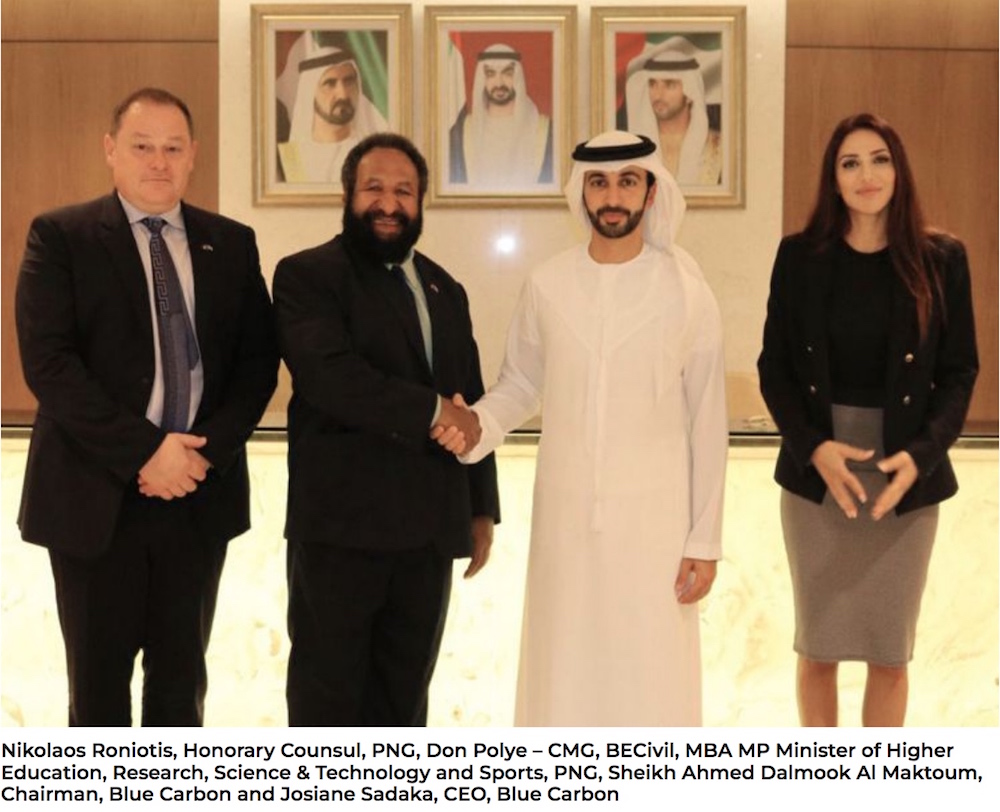 A photograph supplied to the media showing the signing ceremony in Dubai.

Astute readers may recall that Nick Roniotis, was at the very heart of the Cloudy Bay Sustainable Forestry scandal exposed by PNGi and The Guardian newspaper in February 2021.

The story revealed how Nick Roniotis teamed up with Australian brothers Mamdouh and Ibrahim Elomar – patriarchs of a notorious Sydney family linked to Isis and themselves formerly convicted of international bribery – to buy Cloudy Bay Sustainable Forestry for the knock down price of K40 million.

Roniotis has described the purchase as “a pretty good deal by any stretch” but, according to a Singapore court, it was a purchase tainted by fraud. 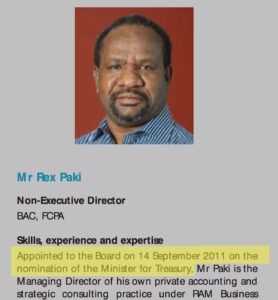 Extract from the PNGSDP Annual Report 2011, confirming the Minister for Treasury nominated Rex Paki to the Board.

According to the court, Roniotis and the Elomars acquired the asset rich forestry company from the PNG Sustainable Development Program at a 90% discount after the Elomars improperly paid K6 million to PNGSDP board member and Cloudy Bay chairman, Rex Paki, and his wife. In return, according to the PNGSDP, Paki improperly executed the massively discounted sale to Roniotis and the Elomar brothers.

Given that Paki has earn’t a slew of criticisms from the courts and Commissions of Inquiry, it might be asked who let the fox into the hen house? It was Don Polye who, as Treasurer, appointed Rex Paki to the Board of PNGSDP in September 2011.

Rex Paki, Roniotis and the Elomar brothers all deny any wrongdoing and dispute the Singapore court’s findings of impropriety. Paki has though described Roniotis as a “personal friend”.

How Roniotis was appointed to the role of Honorary Consul to Greece is not known either and neither is the role he has played in negotiating Papua New Guinea’s deal with Blue Carbon.

Roniotis is not the only person tied to questionable deals to have been associated with Sheikh Ahmed Dalmook Al Maktoum, the owner of Blue Carbon.

In Guyana questions have been raised over how that country ended up purchasing Russian made COVID-19 vaccines from one of the Sheikh’s companies and the alleged involvement of two men said to be wanted in Norway in connection with ‘a massive fraud’ and tax crimes.

Perhaps a good start would be to publish, in full, the details of what exactly Blue Carbon will be doing in PNG, which government agencies were involved in scrutinising and approving the deal, any monetary compensation that has flowed between any of the parties involved, and the beneficial ownership arrangements behind the legal entities which have, or are likely to be paid in order to implement this agreement inked by Polye.