Back in December 2020 the EU and PNG inked €26.9 million (K95 million) in program assistance as part of the EU-PNG Partnership for Good Governance. According to subsequent news reports a significant part of the program’s aim is to tackle corruption.

In order to implement the program a technical assistance contract has been awarded to a consortium led by UK consultancy firm, Adam Smith International.

As the EU-PNG good governance program was taking shape, in an unrelated matter the World Bank launched an investigation into consultant Diclah Taureka. The results of this investigation were published on 6 April 2022.

Taureka was awarded consultancy contracts under two World Bank funded programs in PNG, the Rural Service Delivery Project and the Water Supply and Sanitation Development Project. The World Bank investigation found that Taureka had ‘colluded with a public official to obtain and execute a full-time, Bank-financed consulting contract with the WSSD Project’.

The World Bank also found that Taureka ‘sought remuneration for full-time work for days that overlapped between the projects despite not meeting the minimum work requirements as prescribed under the respective contracts’.

These were deemed collusive and fraudulent practices by the World Bank. As a result Taureka has been debarred for three years from bidding for World Bank funded contracts and contracts funded by other IFIs under cross-debarment procedures.

A discount was provided after Mr Taureka acknowledged responsibility for the underlying sanctionable practices. Taureka agreed to ‘undertake corporate ethics trainings that demonstrates a commitment to personal integrity and business ethics’.

Mr Taureka will be a busy man it seems. Shortly after the World Bank blacklisting was announced, Taureka appears to have begun work as the coordinator for Adam Smith International under the EU-PNG Partnership for Good Governance. 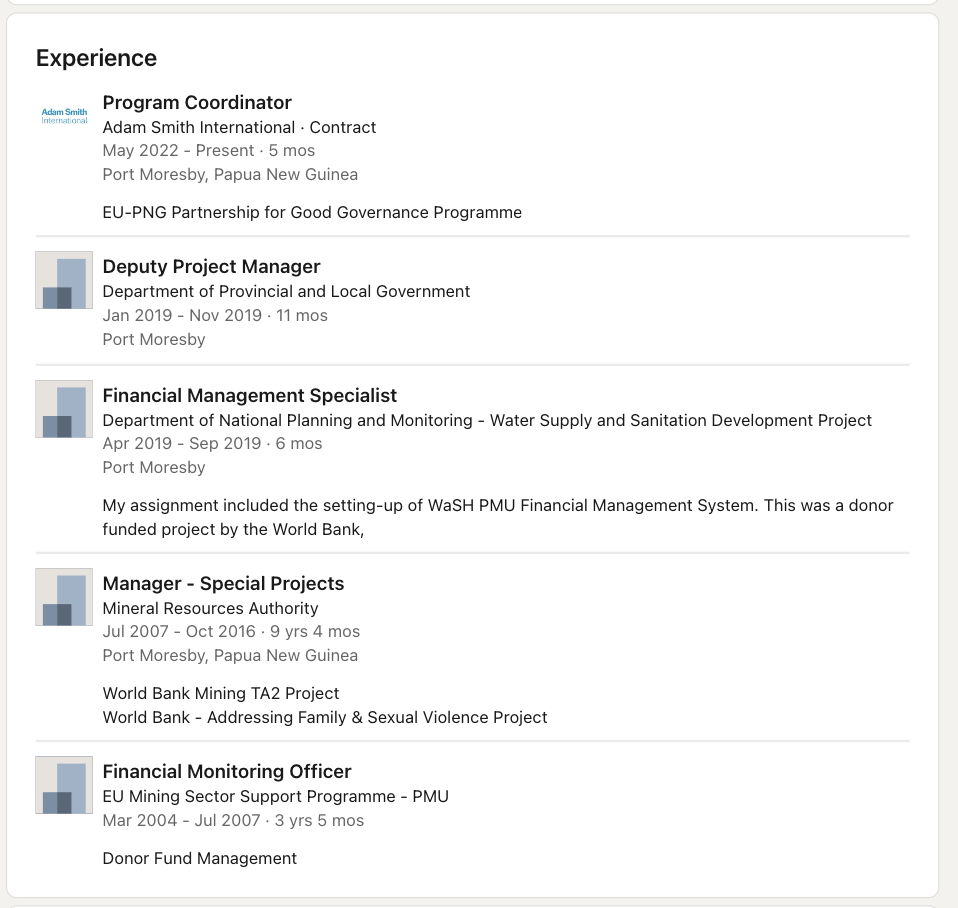 Questions were sent to Adam Smith International and the EU delegation to verify Taureka’s role in the good governance program. Both organisations were also asked whether they were aware of the World Bank findings regarding fraud and collusion, and to confirm if they approved of Taureka’s apparent role in the good governance program given his blacklisting. No response was received from either organisation.

In response to questions sent by PNGi, Taureka argued despite the blacklisting he was an appropriate candidate for the good governance role : ‘I have contributed towards some of the significant development objectives for the country during my capacity as project manager’, Taureka notes. ‘These include managing the strengthening and capacity development of institutions within the mining sector including Women In Mining initiatives in the mining areas. The institutions include MRA, DMPGM, IRC and the ABG Department of Mineral, Energy and Resources (DoMER). As for DoMER, the development of its Mining Act was critical towards the peace initiative and a condition towards ABG pursuing for independence. I am truthful of myself and I believe I can perform and also learn from this important project (EU-PNG Partnership for Good Governance Programme) for the good of the country. The misconduct has nothing to do with my ability to deliver projects’.

When asked if he had advised ASI or the EU of his blacklisting, Taureka responded: ‘The ASI and EU have their due diligence processes prior in doing their engagements’.

This story was updated on 14 September 2022, after a response to questions was received by Diclah Taureka.