The Gang of Red Flag Firms is a two-part series by PNGi that scrutinises a single Department of Health (DoH) document, produced in late 2015. It is a rare public document which details companies awarded major health infrastructure contracts, and the project’s delivery status. This is information often denied to the public.

However, only a single issue of this quarterly report has ever been published on the Department of Health website. While the public has this single keyhole view, the PNG, Australian and New Zealand governments appear to have been provided with copies of this quarterly update on a regular basis.

Once PNGi conducted basic due diligence on the infrastructure awards documented in this quarterly report, a pattern of serious red flags was uncovered. Frankly put, they were obvious and easy to discover in most cases. Yet no one involved in formally monitoring DoH spend appears to have noticed, or at least no one has called it out publicly.

In Part I of this series we examined contracts which went to:

In Part II PNGi will document contracts awarded to:

According to the DoH quarterly report the company, Symobako Limited, was awarded K10,821,423.00 to build  Telofomin District Hospital. When the DoH report was produced in 2015, the project was evidently 80% complete. Though it warns of funding gaps and the contractor potentially abandoning the site.

A news report from 31 July 2018, claims the hospital was 98% complete, suggesting delays had been incurred in completing the project. According to Kramer Ausenco, they have been contracted now by the DoH to renovate the new hospital.

The original contractor, Symobako Limited, was incorporated on 6 April 2011, shortly before the contract presumably started. That is a red flag. Normally construction contracts of this magnitude would go to experienced construction companies with a verified track record of excellence.

In breach of its regulatory obligations, Symobako has failed to file an annual return. This violation of the Companies Act 1997 is a second red flag. It is suggestive of a company that is not prepared to be transparent, and who fails to conform even with basic regulatory requirements.

The sole shareholder and director of Symobako Limited is Doris Mera. She shares a residential address and surname with Steven Mera. Doris Mera was also Director of a company owned by Steven Mera, Saunia Ltd. This strongly suggests Doris Mera is a close associate of Steven Mera.

Up until 15 October 2012, Steven Mera was Secretary for Commerce and Industry. Following his retirement from the public service he became a ‘consultant’  for Symobako Limited.

Steven Mera has been censured on numerous occasions by oversight agencies for conflicts of interest.

A 2007 Public Accounts Committee inquiry into the Department of National Planning and Monitoring accused Mera of serious illegal activity, via Saunia Ltd, at a time when Doris Mera was Director. The Committee observed it had:

Identified further malpractice in the area of consultancies to the Department of National Planning & Monitoring … The Auditor General has found that the Department of National Planning & Monitoring made two payments in a total of K130,000 to two different payees in respect of Consultancy services but: • Did not obtain the required prior approval of the Consultancy Steering Committee from the Department of Personnel Management; • Did not provide the outputs of this arrangement for audit verification although a request for this information was made.

The Public Accounts Committee then notes it

examined these Consultancies more closely. One payment was made to Steven Mera and the other to Saunia Pty Limited, a company owned by Steven Mera who is a relative of a Senior Officer of the Department of National Planning & Monitoring. The above practices are illegal and facilitate irregular payments. There is every reason for this Committee to refer these contracts for further investigation and possible prosecution for a collusion, conspiracy and misappropriation of funds.

Mera came into further disrepute following the SABL Commission of Inquiry. Here it was observed again Mera had conflicting public and private interests: ‘Mr Mera at all material times was an active employee of SPZ in the Nungwaia Bongos project, which we deem to be constructive conflict as to his dual role as both Advisor to the Department of Commerce and Industry and SPZ up to the time he was appointed [Commerce] Secretary in October 2011’.

Symobako Limited’s close tie to politically exposed people, is a red flag. That Steven Mera is accused by multiple oversight bodies of serious impropriety only serves to heighten the risks associated with this K10 million award to Symobako Limited.  If Mera was in post as Secretary at the time the contract was awarded (or thereabouts), which cannot be established based off publicly available records, this would be an even sharper red flag. 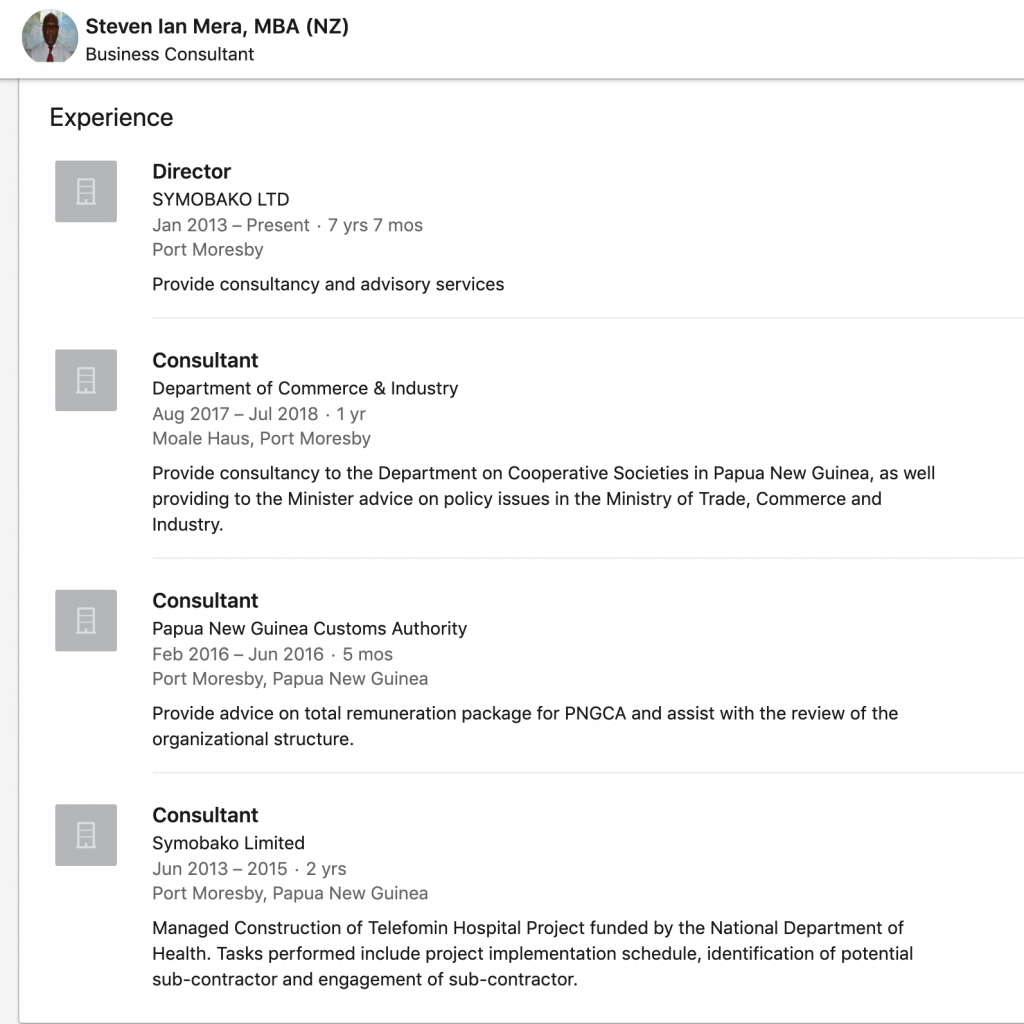 If Symobako was merely a middle-man, who did not have construction expertise, builders, or equipment , and instead subcontracted physical works to companies with such assets, this would prompt a key question. Why did the DoH not directly contract with a construction company with qualified staff and assets? Was an unnecessary middleman used here? Did this unnecessary middleman make a significant profit by charging the DoH a much higher cost, over what it paid to subcontractors?

What is perhaps most concerning about this is that some of the most pungent red flags were apparent at the time this K10 million contract was awarded, had due diligence been done. Yet no one involved appears to have seen it, including PNG’s foreign partners, or if these red flags were observed they prompted no diversionary action.

A 'Rose' by Another Name: Jurudaya Construction (PNG) Ltd

The company Borneo Pacific Pharmaceuticals Limited may ring a bell for many readers. It is owned by Sir Sang Chung Poh, a Malaysian born naturalised PNG citizen. Pohwas knighted for his ‘charitable’ services to Papua New Guinea.

Despite these accolades, auditors, journalists, medical associations, respected physicians and senior politicians have all suggested Sir Poh’s flagship company, Borneo Pacific, has been the beneficiary of lavish spending by the Department of Health, organised through flawed tender processes.

For example, during 2013 it was announced that Borneo Pacific had won a major, three year contract supplying medical kits to health centres and aid posts. The contract was awarded by the national Department of Health, through the Central Supply and Tender Board (CSTB).

At the time Phillip Eludeme was CSTB Chair. Eludeme featured in the National Provident Fund scandal and more recently the Manumanu land controversy.

The contract was valued at K71 million.

An investigation conducted by The Australian in 2013 indicated that Borneo Pacific’s bid was ‘40 per cent above two better qualified competitors’, including Dutch not-for-profit, International Dispensary Association, and local concern, City Pharmacy Ltd.

This allegation was later repeated by Sir Mekere Morauta.

According to the National Doctors Association, ISO 9001 certification ensures medical supplies are procured from reliable sources and supplied safely to health facilities.

At the time, Borneo Pacific was a principal supplier of NCPG products to Papua New Guinea. And, the Health Secretary observed, it was ‘one company that will be providing a majority of the medicines’ under the 2013 award to Borneo Pacific.

This set off alarm bells in the national medical and donor community. A 2011 article published in the Journal of Pharmaceutical Sciences reported that all samples of NCPG medicines supplied to Papua New Guinea were substandard, and one was ‘possibly counterfeit’.

Australian Department of Foreign Affairs and Trade records, leaked to the Fairfax media group, deepened concerns over Borneo’s relationship with NCPG. According to the Canberra Times:

So against this backdrop it is concerning that at around the same time a company much less of a household name, Jurudaya Construction (PNG) Ltd, was awarded K12,754,822.00 to build Popondetta Operating Theatre.

Sir Sang Chung Poh established the company in 2009 with two Malaysian nationals. He holds a 40% stake along side So Jin Poh (40%) and Woi Ming Tie (20%). According to financial returns filed in 2013 the new start company in a few short years had 89 full time employees, K6 million in assets, and substantial liabilities of K11 million. In light of the irregularities in tenders awarded to sister company Borneo Pacific, and serious allegations of substandard delivery, the award of this significant infrastructure contract to Jurudaya Construction is high risk, and one that would require enhanced due diligence, and subsequent enhanced auditing to ensure all public money was properly spent and acquitted.

A contract for K1 million, the DoH report states, was awarded to the company Uni Rise Limited. The K1 million deal was for the renovation of staff housing and a laboratory at the Goroka General Hospital’s Malaria Surveillance United. According to the quarterly report: ‘Termination of contract is in progress. Awaiting for Legal Clearance from NDoH Legal Unit’.

Could this unfortunate outcome have been predicted through basic due diligence at the tender phase? Lets look first at the company’s filings.

When the award was made Uni Rise Limited had failed to submit a number of annual returns, as required in law. The most recent annual return available at the time related to 2006. According to the annual return the company’s principal business activity was logging, rather than construction.

The owner of Uni Rise Limited is Malaysian national Tieu Ngee Eu. As a foreign enterprise the company had received certification by the IPA to conduct business in the areas of logging, and roads/civil engineering. Though property construction is not explicitly mentioned.

Eu keeps questionable company. He is a close business affiliate of Yii Ann Hii who is currently being chased by the Australian Tax Office for a $60 million debt. Eu acted as a Director of Hii’s company, Innovest Limited. This, of course, is not a crime. However, an individual’s associates is a risk factor. The more a person consort with unsavoury commercial figures, the greater the chance is they too have adopted improper methods for doing business.

Perhaps not surprisingly then, Uni Rise Ltd itself has faced rebuke. In February 2013, Justice Sawong described a submission to the court by Uni Rise Limited as ‘mischievous’ and ‘misguided’. Uni Rise was also criticised by Govenor Juffa for its logging operations in Oro Province.

By early 2013 it was apparent that Uni Rise Ltd was a company which was non-compliant with the companies law, it had earned rebuke from Justice Sawong for mischievous court submissions, its financial filings with the IPA appeared irregular, its principal consorted with figures linked to serious illegal activity, and its stated area of principal business was logging – all of which are red flags. As a whole they suggest this is probably not the type of business the DoH ought to be contracting for important renovation work on a malaria medical facility, and certainly not before enhanced due diligence had been done to ensure all these red flags had innocent explanations.

The red flags documented in this two part series would not come as a shock to anyone in the public. While the nation has many fine doctors and nurses working above and beyond to serve the public, the nation’s procurement systems are far from fine, especially in health.

What is perhaps most shocking about this quarterly report, is that it appears to be a form of reporting systematically shared with the Australian Department of Foreign Affairs and Trade, and New Zealand Aid.

The red flags observed here did not require in depth forensication. It was identified via basic due diligence. Many pieces of evidence were simply lying in basic, publicly accessible information sources, awaiting interested eyes.

This investigation suggests not only is the national government failing to safeguard public health expenditure, but so are two important regional partners.

In this article
Company tied to Scandal Plagued Commerce Secretary gets K10 million contractA 'Rose' by Another Name: Jurudaya Construction (PNG) LtdMalaysian logger gets health contractThree Governments - Hear No Evil, See No Evil
Back to beginning of article