The Bank of Papua New Guinea is arguably the nation’s most important financial institution. As Papua New Guinea’s Central Bank it issues currency, acts as the banker to the government, regulates banks/financial services, and manages the nation’s gold, foreign exchange and other international reserves.

According to Joseph Teria, the Central Bank’s now Deputy Governor, a bungled contract threatened to have the Central Bank internationally blacklisted for money laundering and terrorism financing. The agreement was for the purchase of ten new guns for the Bank of Papua New Guinea’s security unit from a Port Moresby based business, Koda Consulting, for K418,000.

The Bank of PNG’s Deputy Governor notes in an email seen by PNGi, that following due diligence checks, it was evidently discovered that Koda Consultancy was not a licensed or registered gun dealer.

The potential consequences of this contract for the bank could have been catastrophic, leading to the loss of its correspondent bank relationships with other central banks and leaving it unable to undertake international transactions or perform its core functions, according to the current Deputy Governor.

Current Bank of PNG Deputy Governor, Joseph Teria was worried the gun contract could have catastrophic consequences for the banks international reputation

Yet, when a bank employee blew the whistle over the transaction, warning bank bosses that not only was the supplier allegedly unlicensed and unregistered, but that the guns had still not been delivered 12 months after full payment had been made, he was allegedly fired.

When the sacked employee appealed to the courts, Justice Canning reluctantly observed he was bound by Supreme Court precedent, which gives employers the right to fire at will, even if an employee is potentially exposing corruption: ‘The plaintiff argues that the reasons given for his termination were without substance. That his performance was exemplary. That he was victimised for exposing negligence and corruption. That is also inconsequential. He was able to be sacked for good reasons or bad reasons or no reasons. That is the law, as declared by the Supreme Court, that I am obliged to apply’.

Since then the whistleblower has made fully documented complaints to both the Ombudsman Commission and the police, yet no action has been taken against those involved in the contract.

According to the whistleblower complaint seen by PNGi,  in September 2017, Bank of Papua New Guinea property and facilities manager, Bruce Kitchen, organised replacement of the Security Services Unit’s existing SIG Sauer pistols, after they were deemed a hazard.

It is alleged that the bank’s Security Services Unit did not seek any independent or expert opinion to support this decision, and it appears Kitchen did not go to a registered gun dealer.

Instead, bank documents indicate Kitchen outsourced the job to the recently registered Koda Consulting to dispose of the existing three SIG pistols, and 748 rounds of ammunition, and then source replacement weapons from a gun dealer. Specifically, six Glock pistols and four Mossberg pump action shotguns. It is unclear why the job was outsourced to a consultancy firm, when the guns could have been purchased directly from a registered gun dealer by the Bank.

Image: The business name Koda Consulting was only registered a few months before being given a gun contract by the central bank.

Again, there was allegedly no independent or expert opinion sought to establish the appropriate number of firearms the bank needed or the type that should be purchased. 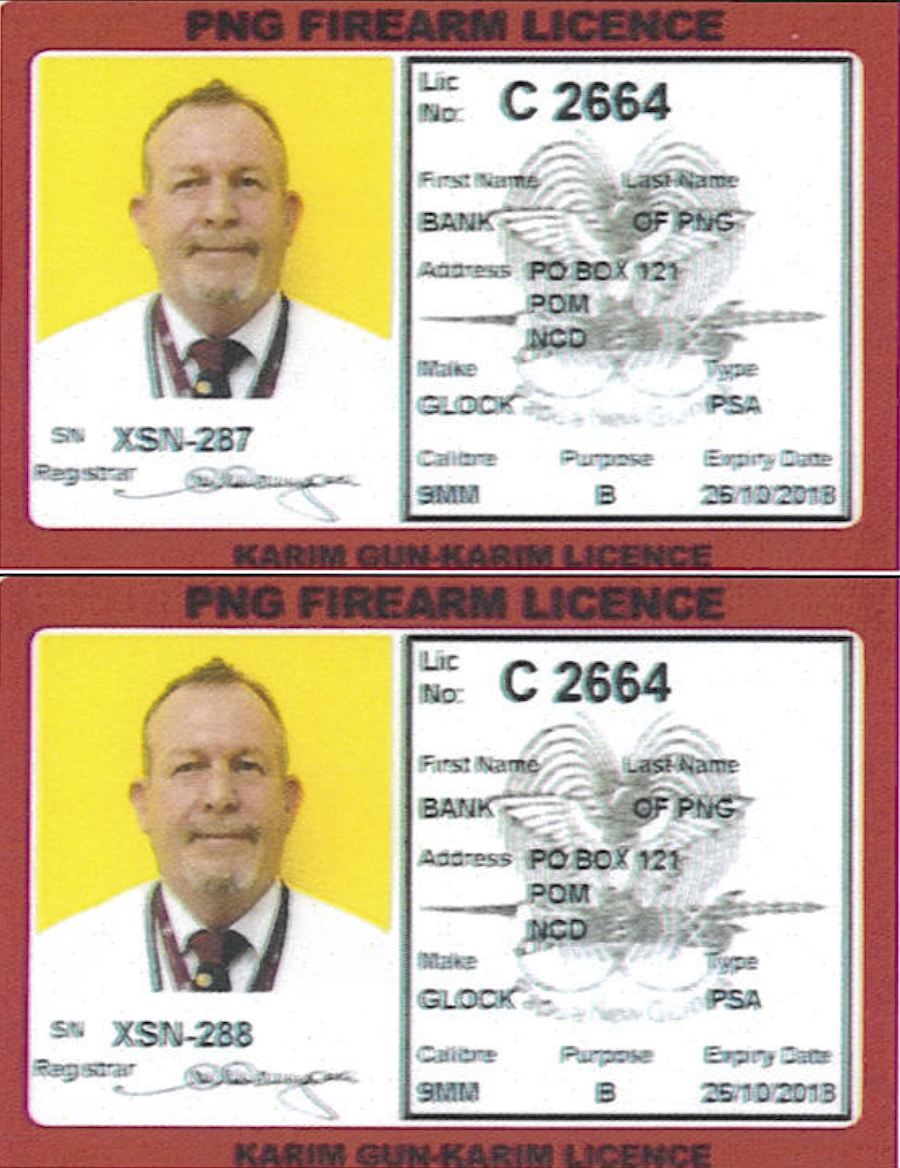 Image: Various firearm licenses were issued, including for two 9mm Glock pistols, but it is alleged these guns were never delivered.

The Bank agreed to pay K418,000 for the new guns. The evidence seen by PNGi indicates there was no independent valuation sought by the bank and no tenders were invited. 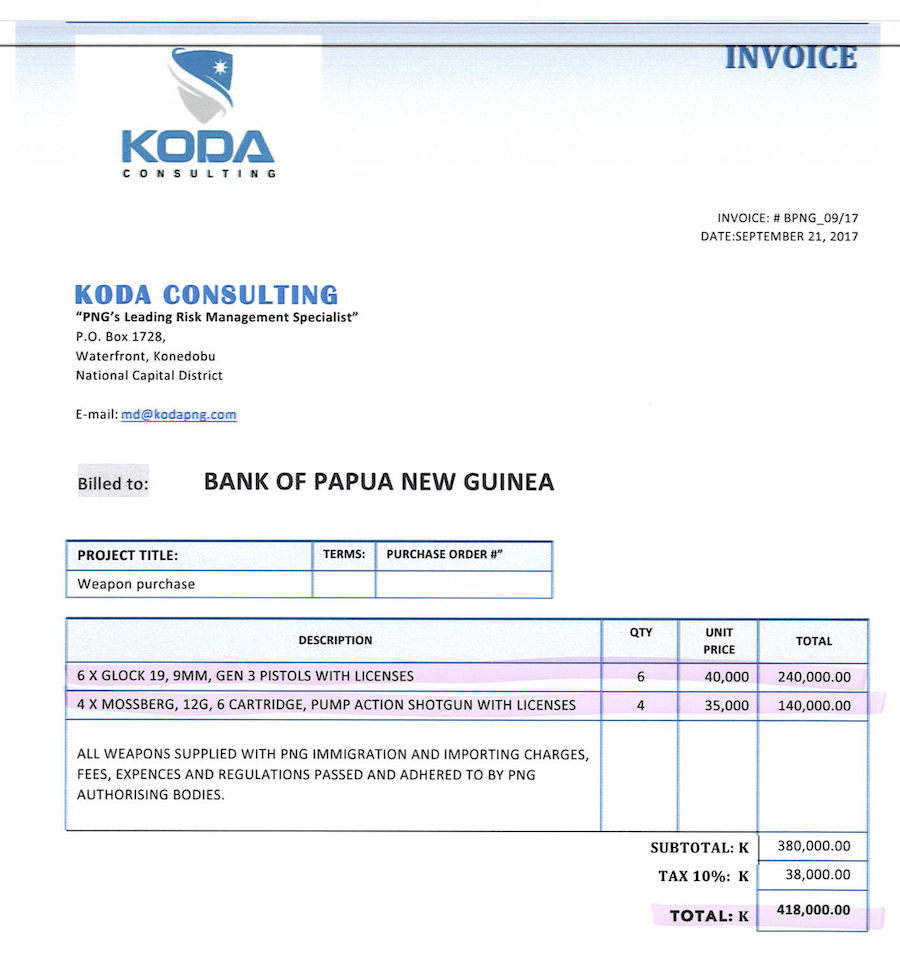 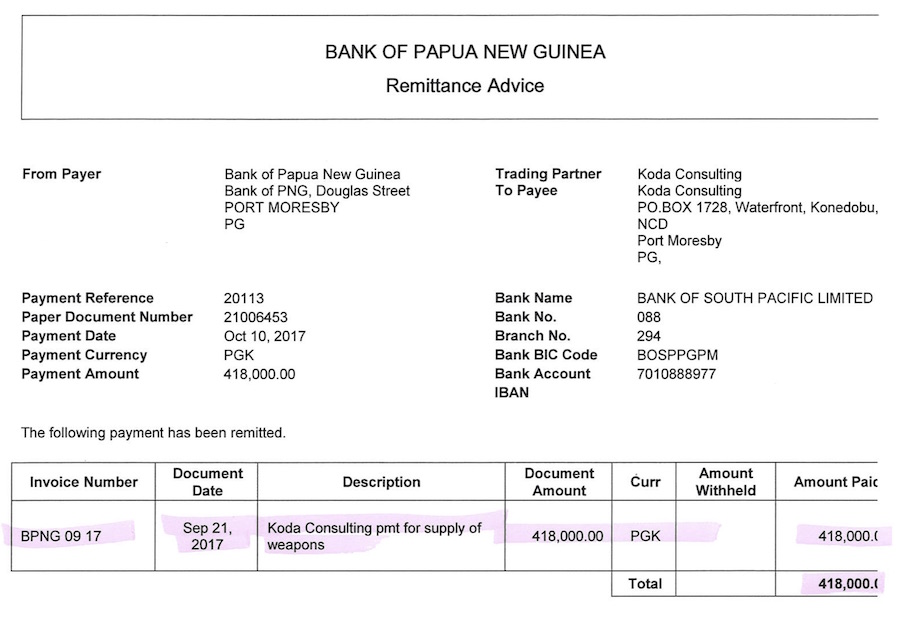 The Bank paid for the guns in full before any were supplied.

Fisher claims in an email to the Central Bank, he needed the money to cover a deposit for the weapons:

It is alleged, Koda Consulting was not a registered or licensed gun dealer. This alarmed the Bank’s senior managers when they were alerted to the contract some 12 months later.

In November 2018, the Bank’s Assistant Governor Finance and Payments (now Deputy Governor), Joe Teria, signalled his concerns in an internal email to Elizabeth Genia, Assistant Governor Corporate Affairs. Teria noted the use of an unlicensed and unregistered firearms dealer by the bank could have ‘serious repercussions’, including losing their correspondent banking relationships, and international black listing. He advised the contract ought to be cancelled.

Genia replied, saying she had ordered all engagements with Koda to be ended ‘after I saw the quality of work was not up to standards including the issue of firearms’, and a separate report had been sent to the Governor on ‘security management’.

One of the performance issues Genia was referring to was presumably the fact that despite being paid in full to supply ten new guns, Bank of PNG records indicate Koda Consulting only initially delivered four. They included two Croatian made HS (not Austrian Glock) pistols and two Mossberg shotguns and then some twelve months after full payment had been made. 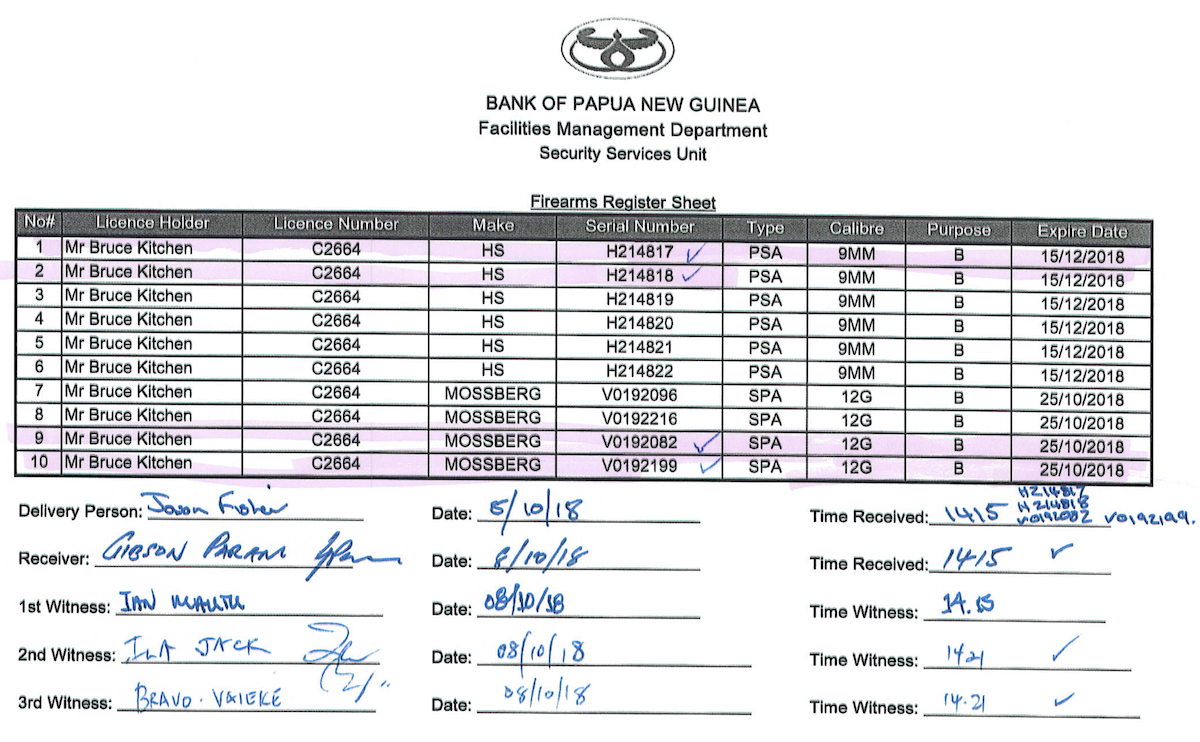 Image: Firearms register showing that only four guns were initially supplied, not ten, and the Glock pistols had been replaced with HS 9mm weapons.

This, it is alleged by the whistleblower, meant for a whole year the Bank of PNG security team had no firearms.

Meanwhile, the whistleblower who documented and reported all these matters to the Bank’s senior managers was subsequently sacked.

Koda Consulting ceased business in September 2018, a month before it first delivered any guns. The business was formally deregistered in April 2019. 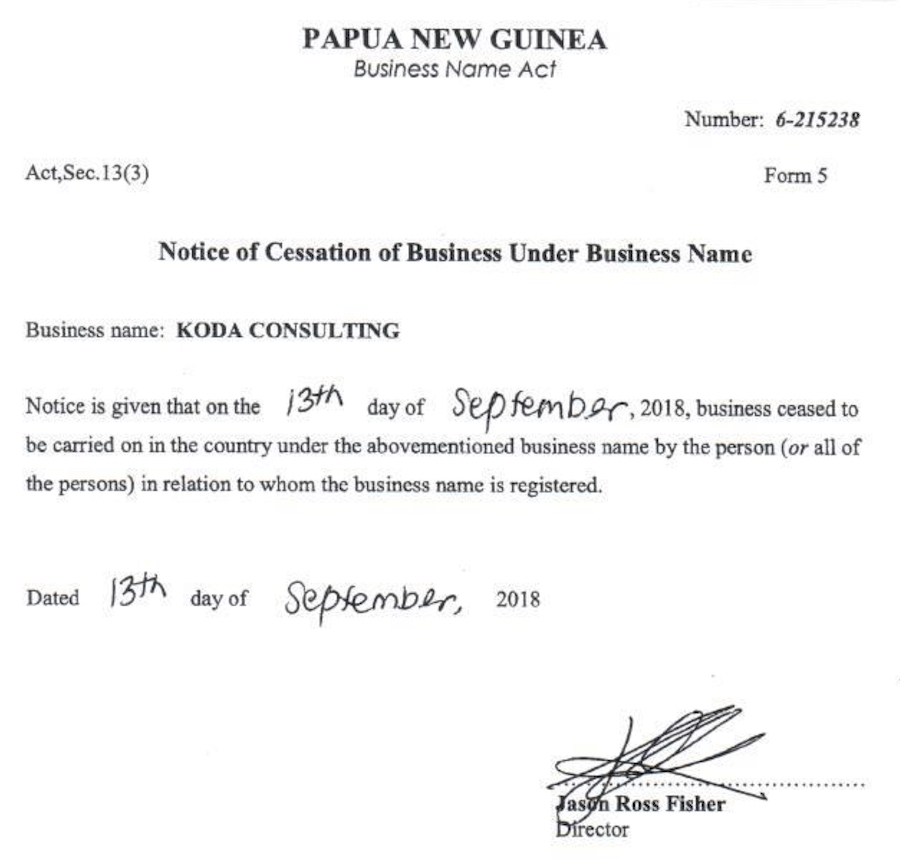 Koda Consulting ceased operations in September 2018, before its first delivery of guns to Bank of PNG

The Koda Consulting business name was registered and owned by Pacific Professional Solutions Limited which, in turn, is owned by an Australian businessman, Jason Fisher. 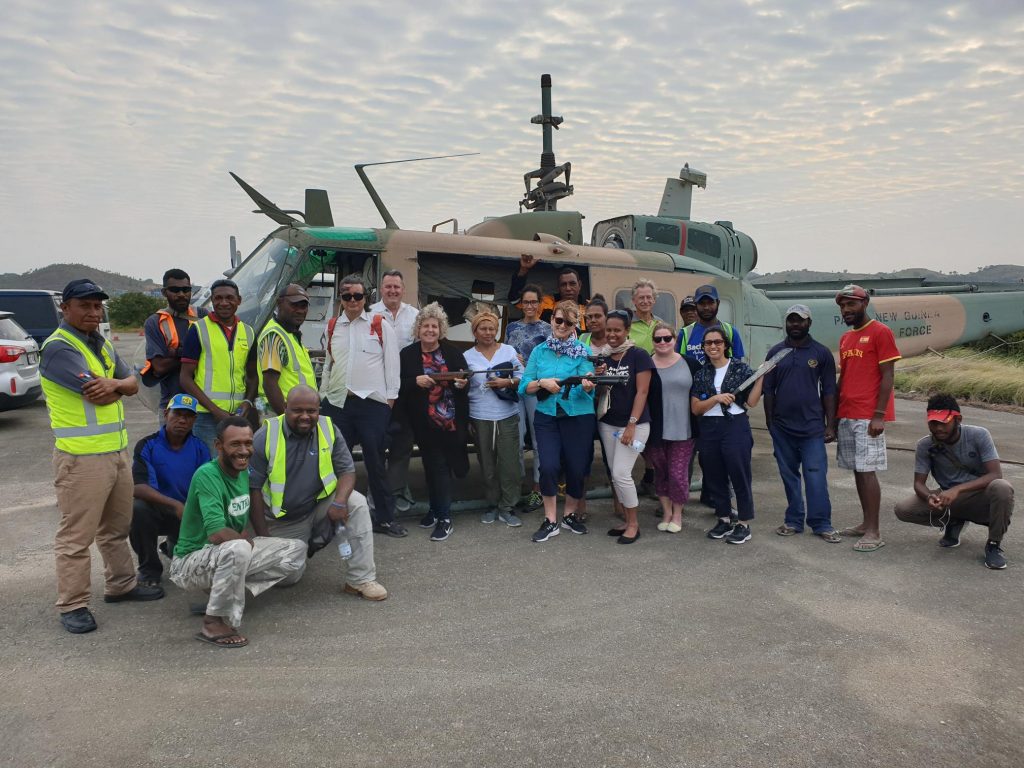 According to Fisher’s LinkedIn profile he is a former member of the Australian Army’s Special Air Service Regiment serving from 1995-1998. He then spent eight years at the Australian Federal Police.

It is alleged, Koda also never disclosed to the Bank of PNG what happened to the three SIG SAUER pistols it was given to destroy. The Bank according to whilstleblower documents has not been provided with any proof of the guns destruction or their current whereabouts.

Image: The fate of three SIG Sauer pistols, including the one pictured, given to Koda Consulting allegedly remains a mystery

When informed of all these allegations the Ombudsman Commission declined to investigate saying the ‘alleged issue of fraudulent transactions involved in purchasing and replacing of the Bank’s firearms by Koda Consultants is criminal in nature’ and should be referred to the police Fraud and Anti-Corruption unit.

A complaint was laid with the national fraud directorate in April 2019, but was never acknowledged or followed up. 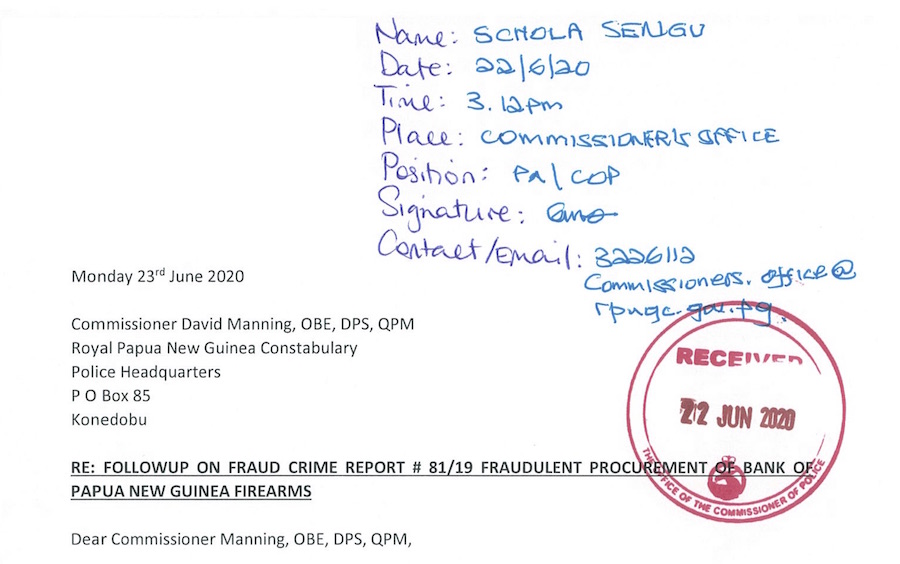 This led to a follow-up complaint being laid with the new Police Commissioner in June this year. The complainant is still waiting a response.

Given the serious implications of this transaction for the nation’s most important financial institution, it is hard to explain how this could have fallen on deaf ears.

This case also provides worrying evidence, reflective of a wider pattern, where it is the whistleblowers who faces sanction, not those whose conduct is exposed.

Koda Consulting did not respond to a request for comment sent by PNGi.