Have govt Ministers been lured into another expensive scam?

The Eastern Highlands Agriculture Project could be the latest to join the list.

At a ceremony convened in the Hilton Hotel, Prime Minister Marape witnessed the signing of a K45 billion MOU with McKinley Asia PNG Limited. This massive sum we are informed will be used for investment in agriculture and livestock projects and road, housing and health infrastructure in the Eastern Highlands.

Just look at what is being promised.

An investment of over K45 billion – that is roughly equivalent to the amount spent to build the PNG LNG project, which is PNG’s largest ever construction project.

500,000 jobs, doubling the number of people employed in the formal economy in the whole of PNG.

And who is going to deliver this unbelievable dream future for the people of Eastern Highlands?

Media reports state the company is a ‘subsidiary of United States based McKinley Investment Group LLC, headquartered in the Beverly Hills, an international group of companies specializing in fund managements with operations spanning over 100 countries across the globe‘.

But a check of Investment Promotion Authority records show no link to any US-based corporation. The owners of McKinley Asia-PNG Limited are two South Korean nationals, Jackyeum Yu and Minho Hwang. The company was only registered in January this year and has a paid up capital of just K100. The two Korean owners are also the company’s only directors, not a good  sign if you are looking for robust and independent governance. 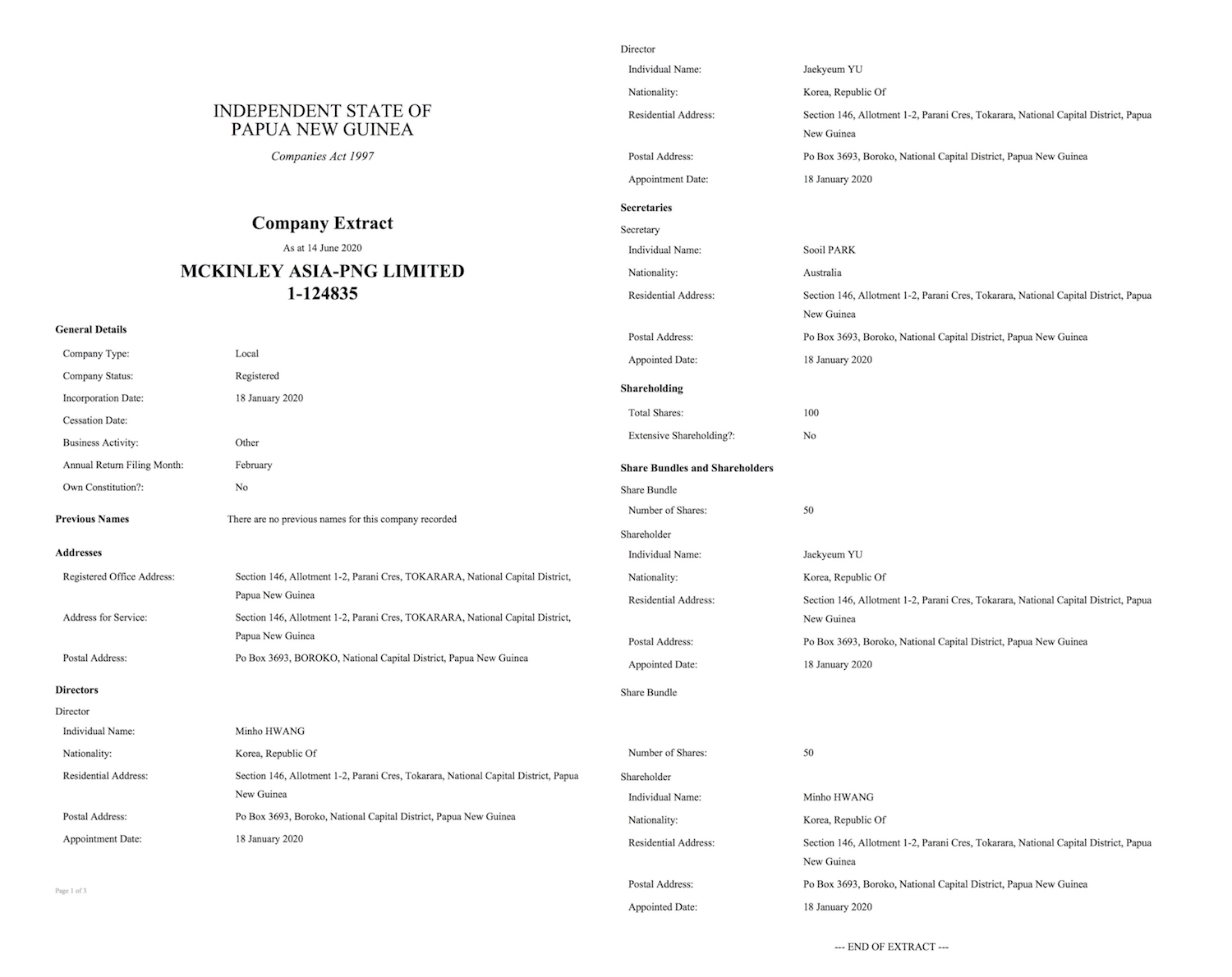 Although there is no direct ownership link between McKinley Asia-PNG Limited and the US based McKinley Investment Group, the PNG based operation has recently been added to the list of ‘McKinley Group Companies’ on the Group’s website. Checks made by PNGi show that this addition of the PNG operation came sometime after the grand project signing ceremony for the Eastern Highlands Project in Port Moresby. 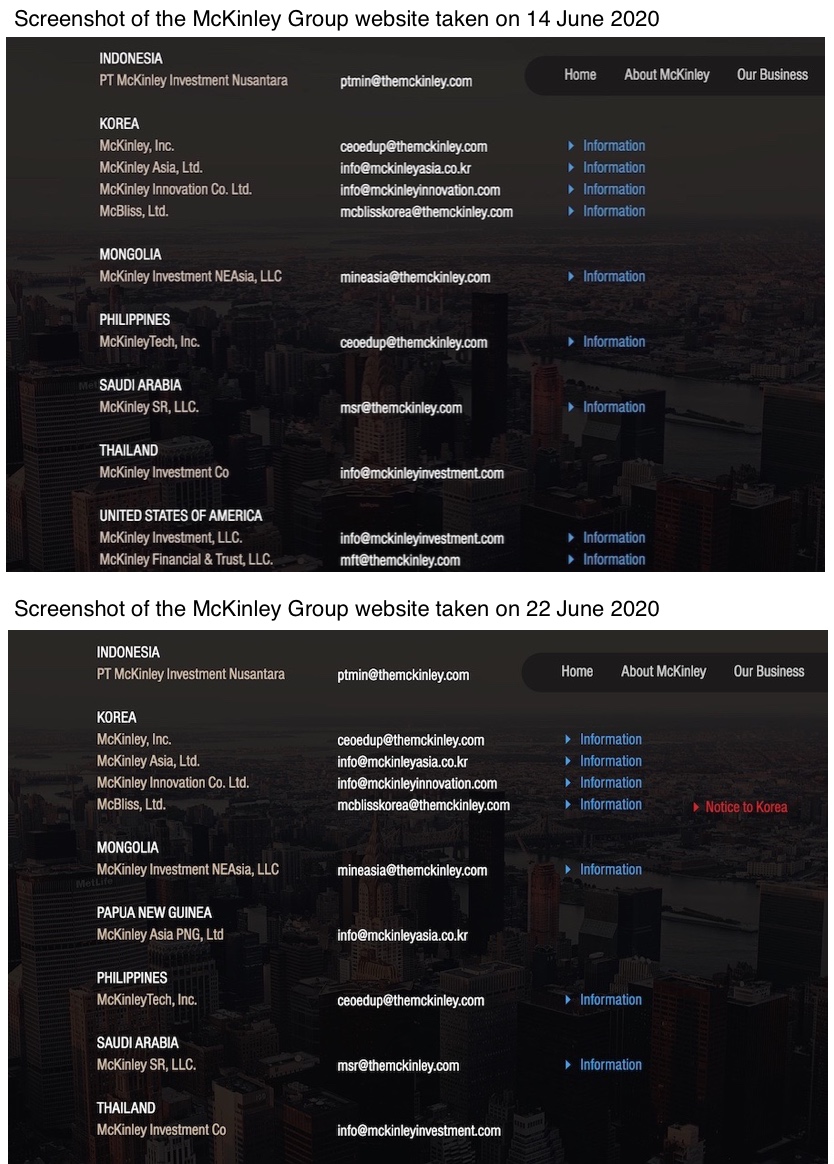 McKinley Asia PNG Ltd was only added to the McKinley Investment Group website after the announcement of the Eastern Highlands project agreement.

Although the name of McKinley Asia-PNG Limited has now been added to the McKinley Investment Group website, in contrast to most of the other ‘group companies’, the website contains no further details about the PNG company or its operations.

Putting aside the questions over the ownership of McKinley Asia-PNG Limited and the nature of its links to the US based McKinley Investment Group, lets just remind ourselves why people want to invest. They do it to make money. People invest in property because they want to receive the rental income and expect that over time the value of the property will rise, making them wealthier. People invest in company shares because they want to receive dividend income and expect the value of the shares will rise over time, increasing their wealth. A company invests in the construction of a factory because the factory will produce products they can sell for a profit, a profit that is large enough to repay the cost of building the factory and operating it.

There is certainly money to made from agriculture in PNG, rich fertile soils, plenty of sun and rain, crops grow well here and there are already plenty of companies who are seizing the opportunity not to mention the millions of families who rely on agriculture for their daily subsistence and livelihoods. But the Eastern Highlands Agriculture Project is promising far more than just agriculture – roads, electricity, housing, clinics, health centres and hospitals even a new Agriculture Institute.

How can an investor make money out of building these types of infrastructure? One option is you run them as private enterprises and charge the user – but how many people in Eastern Highlands can afford private medical care, private house rentals or road tolls and how will such private facilities benefit ordinary village people? The other option is you build the infrastructure and then sell it to the government for more then it cost to construct – so the taxpayer ends up footing the bill, not just for the cost of the road or hospital or college but also paying a premium into the hands of the foreign ‘investor’ (or ‘profit seeker’).

Since news of the agreement between McKinley Asia-PNG and the government broke, their has been plenty of criticism voiced on social media, criticism which Governor Numu has tried but failed to properly answer. Indeed, the more he says the more he looks completely out of his depth.

According to Numu, there has yet to be any feasibility study conducted on whether any of the proposed projects are financial viable, yet the K45 billion investment figure has been set by McKinley and 500,000 people will be employed. The K45 billion will be paid into the Central Bank in tranches. Once the money arrives McKinley will signal the provincial government who will then ask the government to set up a State negotiating team – to negotiate what exactly? Project components will be delivered on a Build, Own, Operate and Transfer (BOOT) model, so the investor will build a factory (usually after having been granted significant tax and other concessions), own it, operate it (taking the revenues and profits), and then transfer it to the government at the end of a fixed contract period.

Meanwhile, the Post Courier newspaper has reported the chances of the project taking off are “grim”, and that the K45 billion figure was inflated with a stroke of the pen from an initial K5 billion.

All this leaves some very serious questions unanswered: