Since Independence in 1975, Papua New Guinea has relied on large-scale natural resource extraction to deliver its development aspirations.

It is a model that the Nation’s founding fathers warned would not work and the history of the last forty-five years has proved them right.

While vast quantities of oil, gas, gold, silver, copper and tropical logs have been ripped from the ground and shipped overseas, the standards of education and health care have declined and Papua New Guinea now ranks below all its Pacific neighbours on most development indicators.

In allowing oil, gas, mining and logging companies free-reign, successive government’s have run rough-shod over the Nation’s progressive and forward thinking Constitution and left the majority of its people to fight over the crumbs.

A recent court battle initiated by customary landowners from the remote Hidden Valley area of Morobe Province illustrates the point. The customary landowners want a number of local law and order programs rolled out to address the chronic crime problems that have accompanied the construction of a large mine in their area. With both the government and the mining company refusing to foot the bill the landowners have been trying to raid a trust fund set up to benefit local settler communities in order to pay for the initiatives.

It is a battle that has left the traditional landowners being labelled as ‘busybodies’ and ‘meddlers’ and facing a large legal bill while the profits from the gold and silver dug from their valleys enriches the foreign miners and their shareholders.

The Hidden Valley gold and silver mine is situated some 200km northwest of Port Moresby and 100km south of Lae. 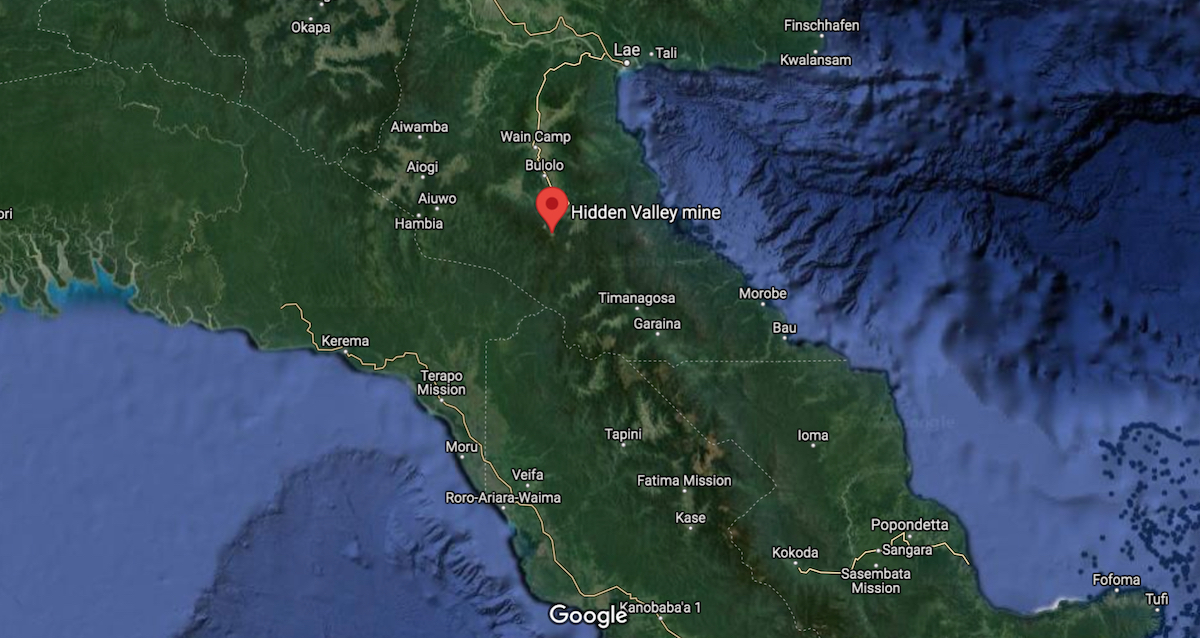 It is a remote and rugged region, where few people lived prior to Harmony Gold and its then partner, Newcrest Mining, being granted a mining lease in 2005. Since then, as similarly experienced at numerous other mining and logging sites, live has changed immeasurably.

Mine workers, service providers and rent seekers have poured into the area. A huge new cash economy has fuelled alcohol and drug abuse, sex work and a rise in crime. Casual relationships have spawned unwanted pregnancies and a high number of unmarried mothers. There is huge inequality between those who have benefited from the mine and those who have not, further fuelling the breakdown in law and order. The demand for public services has ballooned and the State has been found wanting.

Government has failed to invest in decent health and education services and in law enforcement. Instead the local people, the original custodians of the land have been left isolated, struggling to cope with a tsunami of negative environmental and social impacts that nobody warned them were coming.

The Nakuwi Association represents the customary landowners from the Nauti, Kuembu and Winima villages. They are the customary owners of the land where the Hidden Valley mine is located.

In 2005, a Memorandum Of Understanding was signed between the stakeholders in the mine. The MOU governs the disbursement of royalties by the State to the Provincial government (42%), three Local-level governments (14%), the customary owners of the mining lease land (39%), other affected communities (3%) and settler communities (2%).

The ‘settler communities’ are defined in the MOU as people that had been granted permissive rights by the landowners to occupy land within the mining lease area and were living there prior to the commencement of mining.

The MOU provided that the mining company would set up and administer a trust fund on behalf of the settlers. In the meantime it would accumulate their royalty payments.

Since 2005, the law and order situation in the mining area has severely deteriorated and in the absence of proper government support, the police and courts have become overwhelmed and staff disillusioned by their poor work and living conditions.

In 2020, the mining company, government representatives and the Nakuwi Association came together to try and find some solutions. At a meeting held in Lae, in February 2020, it was decided that K2.8 million should be spent to address the law and order situation around the Hidden Valley mine.

The settlers were not represented at the meeting and have never been consulted or given their consent; and why should they, funding for law and order is a government responsibility after all and the poor settlers are at the bottom of the pile when it comes to royalty distribution.

The February 2020 agreement was though never implemented. The Mineral Resource Authority in Port Moresby claims its officers in the meeting were not authorised to make the agreement.

The customary landowners were left feeling aggrieved and decided to use their own monies to fund a court action to try and force the release of the K2.8 million in accumulated settler funds and the implementation of the agreement to use the monies for the law and order program.

In September 2020, the National Court rejected the customary landowners application. The judge found that, in accordance with the MOU, the seller communities were a ‘different and distinct’ group from the landowners and the landowners did not have any legal rights to dictate how the settler funds are disbursed. The judge described the landowners as ‘busybodies’ ‘prying into the affairs of the Settler Communities’.

The court also declared the resolutions passed at the meeting in February 2020 invalid and unenforceable as they breached the terms of the MOU and the settlers entitlement.

Aggrieved by the decision of the National Court, the Nakuwi Landowner Association appealed to the Supreme Court.

On September 15, a three judge bench in the Supreme Court handed down its decision. The judges were similarly dismissive of the landowners application.

The Supreme Court endorsed the lower court characterisation of the landowners as ‘busybodies’ and as ‘meddling in the affairs and interests of the ‘Settler Communities’’. The landowners were ‘trying to benefit from or put their hands on something which was and is not theirs’, said Justice Anis.

The Supreme Court dismissed the landowners appeal and affirmed the decisions of the National Court rejecting the landowners request for disbursement of the settlers funds.

There is though a larger question at play here. Why are a group of customary landowners having to take legal action against the State in order to try and access funds to pay for law and order programs in their backyard?

Shouldn’t the government be paying for police vehicles and court house renovations, rather than leaving customary landowners to try and dip into someone else trust fund to pay the bills?

These are not things that either the settlers or the landowners should be required to pay for. They are part of the State’s obligation to all its citizen’s and should be paid for by the government.

If the government doesn’t have the monies to pay for law and order in Hidden Valley, what was the point of approving the mine in the first instance?

This, of course is not a problem that is confined to Hidden Valley.

Look at all the terrible environmental, social and law and order problems in the Porgera Valley that neither the mining company or the government seem able to solve. Look at all the violence in logging camps that leads to foreign logging companies employing serving police officers to defend their property and operations. Look at the situation in Western Province, where decades of mining have enriched a few while most people suffer some of the worst health and education services to be found anywhere in the country.

The lack of foresight and planning by our leaders over the past forty-five years has been a gross dereliction of duty. The Constitutional Planning Committee gave them a clear road-map and warned of the dangers that lay ahead if the route they had mapped was not followed. Rather than following that advice, successive governments have driven the country straight over the cliff, leaving landowners and settlers to fight over the crumbs.