It is impossible to deny the splendour of the modern Star Mountain Plaza in Port Moresby.

Its centrepiece is the five-star Hilton Hotel, housed in a 16 storey tower with over 200 guest rooms, a fine dinning restaurant, cafes, bars, gym and pool.

Below the hotel sits the international convention centre. The majestic sweeping arches of its laminated timber frame, designed to reflect a traditional long haus, encompass a banquet hall and six separate conference facilities.

On the other side of a circular driveway is a block of 160 luxury apartments – with their own swimming pool, roof top bar and members club.

And between the three main buildings there is an outdoor amphitheatre and carefully manicured gardens with over 12,000 plants from every corner of the country. 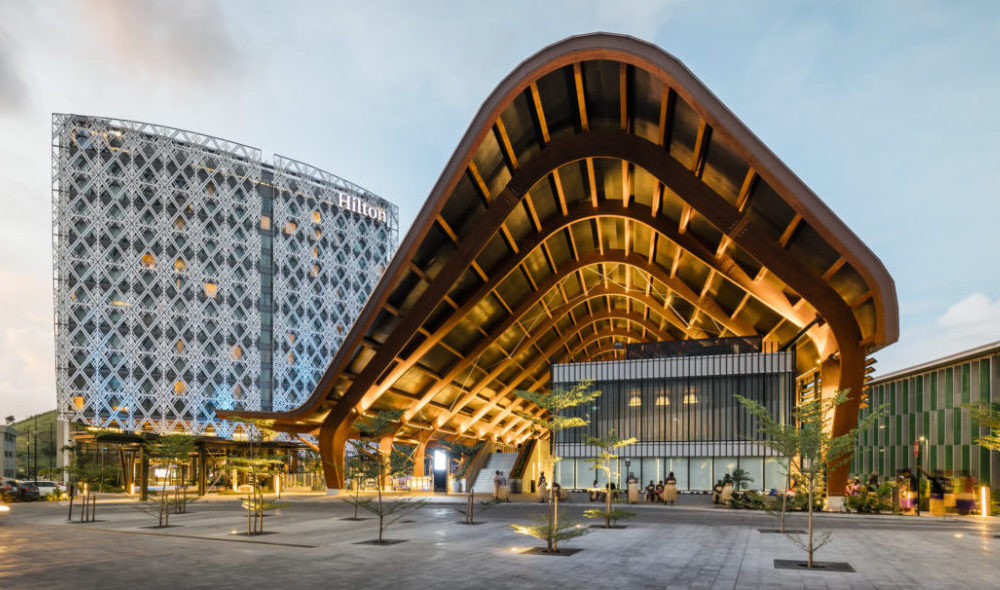 The design of the Star Mountain Convention Centre is based on a traditional village long haus.

Construction of the Plaza began in 2015, and the Hilton Hotel opened just in time to welcome guests for the 2018 APEC Summit. It was APEC Minister, Justin Tkatchenko’s landscaping company, PNG Gardener that reportedly supplied many of the plants that adorn the site.

Since APEC the block of luxury apartments has been added to the Plaza and a further four-star hotel and shopping mall are in the planning stages.

Meanwhile, a merry parade of political parties, diplomatic missions and international NGOs have competed to keep the conference facilities busy; none apparently aware of the financial black hole in which the Plaza sits.

The entire Star Mountain Plaza complex is 100% Papua New Guinea owned. The construction costs were funded from landowner royalties received from three different mineral and petroleum extraction projects and by the State, which contributed K100 million of tax payers money in return for a 20% stake.

Yet, despite the public financing and ownership of the Plaza complex, there has been zero transparency, accountability or independent governance oversight of the hundreds of millions of Kina spent on the design and construction, and there is zero information available on the income being generated or on any profits that are being made.

Despite all its architectural splendour, the Star Mountain Plaza sits in an enormous financial black hole.

The only Annual Returns that MRDC has ever filed with the Registrar of Companies on behalf of Star Mountains Plaza were for the years 2013, 2014 and 2015.

These were all ‘nil returns’ that declared ‘nil’ assets’, ‘nil’ liabilities and ‘nil’ employees. No annual returns or audited accounts have been filed for any year since construction of the Plaza begun.

Instead, in February 2022, MRDC filed with the Registrar of Companies the latest in a long series of requests for extensions of time in which to file the annual returns for SMPL. In this latest set of requests the MRDC stated the annual returns for 2016, 2017, 2018, 2019 and 2020 would all be filed by 30 June 2022. That deadline has now passed with no new filings appearing on the IPA system. 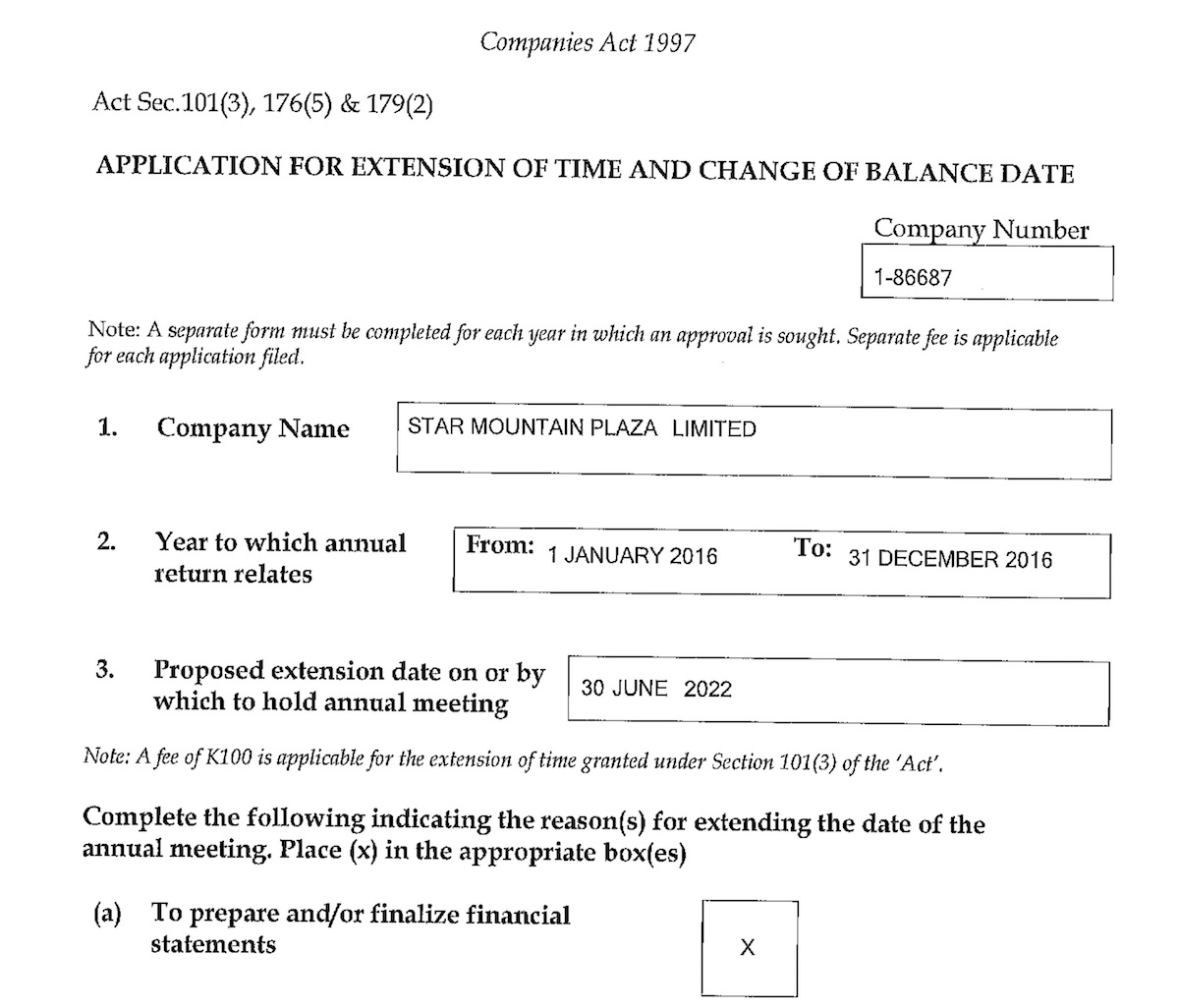 In February, MRDC informed the Registrar of Companies the Star Mountain Plaza annual return for 2016 would finally be filed by 30 June 2022.

These requests for extensions of time, follow similar requests made by the MRDC in March and July 2020 and January and July 2021. In each case the MRDC promised the missing returns would be filed within six months. None of those promises were kept.

PNGi contacted the MRDC for comment on its failure to file annual returns for Star Mountains Plaza but the MRDC declined to give any substantive response, citing confidentiality requirements and the need for Board approval of any public disclosure (the full response from MRDC is copied below).

The four companies that own Star Mountains Plaza Limited, which are all also managed by the MRDC, have similarly blank financial histories.

Petroleum Resources Kutubu Limited, which owns 45% of Star Mountains Plaza Limited, has not filed an annual return since 2015. According to MRDC, auditors are still working on the 2016 financial statements.

Mineral Resources Ok Tedi No.2 Limited, which owns 21% of Star Mountain Plaza Limited, has not filed an annual return since 2014. Its auditors are still working on its 2015 financial statements.

Mineral Resources Star Mountains Limited, which owns 14% of Star Mountain Plaza Limited, has not filed an annual return since 2016 and auditors are still working on its 2017 financial statements.

In total, Star Mountains Plaza Limited and the three landowner trustee companies that own 80% of its shares, have failed to file their twenty-four most recent annual returns and audited financial statements.

As a consequence, the rural landowners who monies have funded the opulent splendour of the Star Mountains Plaza, a splendour that most can have very little hope of ever sampling for themselves, have no idea how much of their money has been spent, whether it was used wisely and whether they will ever see a single toea returned.

APEC I&IC was created by the MRDC in May 2018, when MRDC decided to change the name of another of its subsidiaries, Mineral Resources Ok Tedi No.3 Limited, and rebrand it as APEC Infrastructure & Investment Company Limited.

Resolution by the MRDC Board in May 2018 to change the name of Mineral Resources Ok Tedi No.3 Limited to APEC Infrastructure and Investment Limited. This was ten-months after APEC IIL was issued with a 20% shareholding in Star Mountains Plaza Limited

Rather bizarrely, although APEC I&IC did not exist prior to May 2018, some ten-months earlier, in July 2017, Star Mountains Plaza Limited issued APEC I&IC with a 20% shareholding. This share issue coincided with an investment by the State of K100 million into the company.

APEC I&IC has only ever filed one annual return with the Registrar of Companies. That was for the year 2020 and was a ‘nil return’. That document described the company as ‘insolvent’, and declared its principal business to be ‘oil and gas’, rather than tourism, hospitality or property investment. The return was signed by MRDC Managing Director, Augustine Mano. 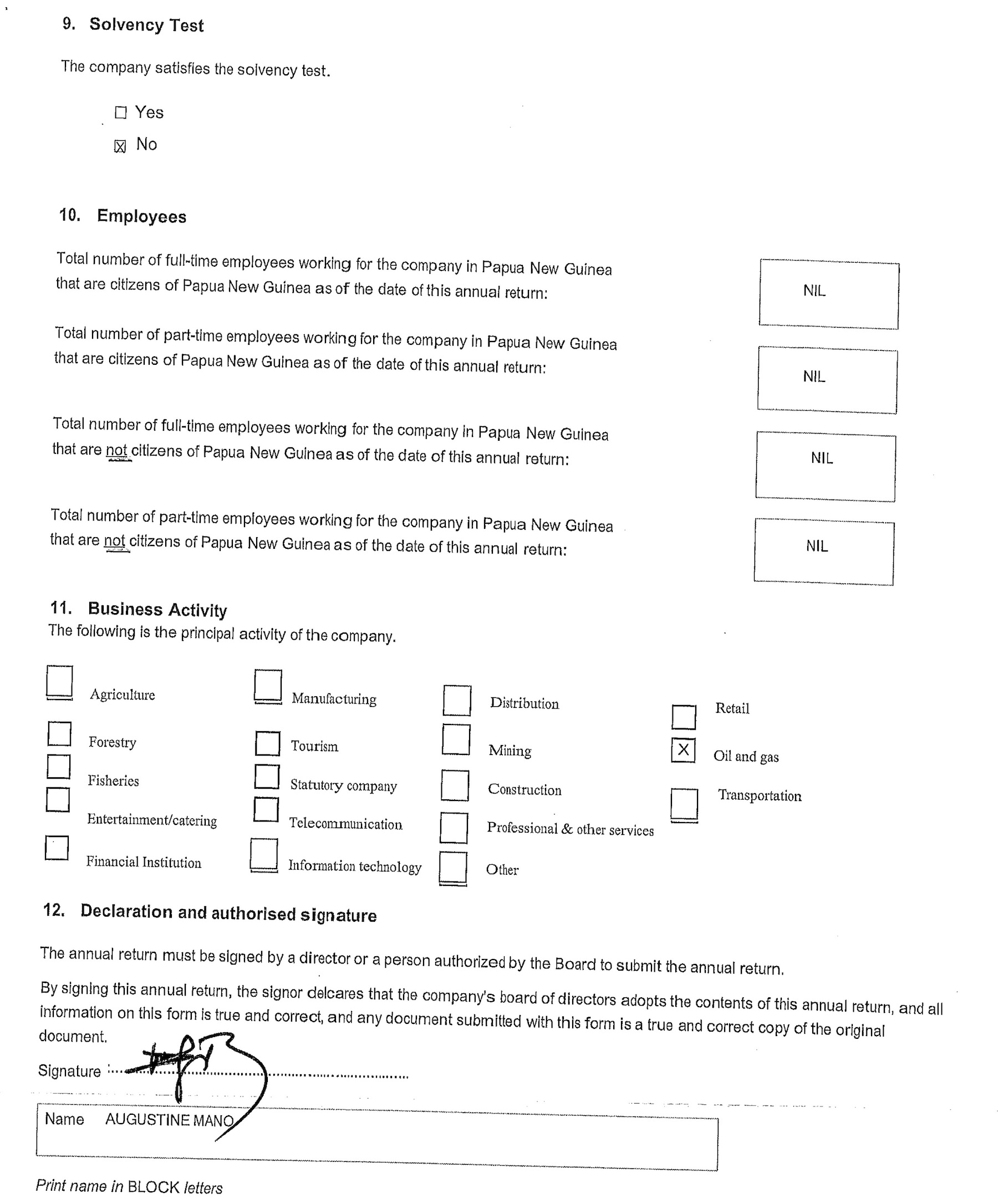 Extract from the Annual Return for 2020, filed by the MRDC on behalf of APEC Investment & Infrastructure Company Limited and describing the company as ‘insolvent’ and principally involved in ‘oil and gas’

PNGi asked the MRDC to confirm if APEC I&IC is indeed insolvent and whether its principal business was correctly described in its annual return but the MRDC declined to give any further information.

Despite APEC I&IC being State owned, it has never featured in the reports of annual audits conducted by the Auditor General on government owned companies. APEC I&IC did not not even get a mention in the Auditor General’s special report on APEC expenditure, published in April 2021.

This is all the more surprising given the Auditor General did highlight in that APEC report as a ‘significant matter of concern’ the State’s contribution to the construction of the Hilton hotel:

“US$30 million (K100 million) was paid by the State through Kumul Petroleum Holdings Limited (KPHL) as the State’s contribution for the construction of Hilton Hotel but this was not disclosed in the APEC Authority financial reports”.

This raises the question of whether the Auditor General is even aware of the existence of the State owned APEC Infrastructure & Investment Company Limited and its shareholding in the Star Mountains Plaza?

Again, MRDC was approached for comment but declined to give any further information citing confidentiality requirements.

Based out of the United States, the Hilton Group proudly trumpets its commitment to good governance:

“Cascading from our Board and executive leadership, we are committed to best-in-class governance practices, ensuring we operate with accountability, integrity and transparency in everything we do.”

Hard to square that statement with the complete lack of accountability or transparency and clear failures in good governance practice displayed by both Star Mountains Plaza Limited and its shareholders.

“We hold ourselves and our partners to the highest ethical standards. We are committed to pursuing the most responsible business practices, acting with integrity, and managing risk, with appropriate Board oversight.”

PNGi contacted Hilton Group to ask how they square their public commitments to accountability and transparency with the complete opacity surrounding the financing of the Star Mountains Plaza. Hilton did not respond beyond acknowledging receipt of the questions.

PNGi contacted the Mineral Resource Development Company Limited asking for comment on the issues raised in this article, many of which relate to information that is legally required to be publicly disclosed.

This was their response:

Thank you for your interest in the Star Mountain Plaza project.

The MRDC management is happy to have an in-person meeting with your team to respond to questions and queries.

However due to the confidentiality requirements under the governance framework which encompasses MRDC and its affiliates the management is required to obtain prior board approval before disclosing company information to third parties.

In the interim we will require the PNGi Portal Editorial Team to sign a Non-Disclosure Agreement (NDA) prior to the meeting so that once board approval is given any information and access to any relevant document will be kept confidential save for matters which the board approves for disclosure.

We at MRDC value accountability and believe that being transparent builds trust and promotes engagement with our stakeholders and the general public however we are also equally bound by legal governance requirements relating to disclosures. We trust that PNGi appreciates these important considerations.

Please let me know if your Team can sign the NDA prior to any further disclosure from us regarding SMPL.

Download all
In this article
Publicly owned: Zero TransparencyAPEC Infrastructure & InvestmentThe Hilton HotelMRDC ResponseCompany Extracts and Filings
Back to beginning of article