The Popondetta District court has recently issued orders temporarily halting any logging operations in the Musa Foru area of Oro Province. Local landowners say they have never consented to the clearing of their forests.

Oro Governor, Gary Juffa, has been assisting the landowners with their court action. He has been battling illegal logging in his Province for many years.

Juffa has labelled all logging operations in Oro as unlawful, claiming none have the informed consent of local landowners. He is especially critical of the PNG Forest Authority for its indifference to the plight of landowners and its failure to uphold and enforce the law.

“I have written and had numerous meetings with relevant entities to no avail. We will take very firm action via whatever avenues are available to us since these entities seem to have been gagged and are silent and apathetic to our concerns. One wonders who knows they work for.”

A PNGi investigation into the Musa Foru logging operation has uncovered the two companies involved have a history of engaging in illegal land deals. We have also found the Malaysian businessman at the centre, Kem Sam Go, is the owner of a number of other logging companies with operations in various parts of PNG.

The two companies involved in logging Musa Foru are Musa Century Limited and Musa Valley Management. Both have been ordered to stop all logging activities, including the shipment of logs for 90 days.

According to official log export data, the logging operation started in 2020 under a Forest Clearance Authority, FCA 05-05, issued for the ‘Lower Musa Agro project’.  In 2020, Musa Century Limited exported 5,299 cubic metres of logs from the area.

Local landowners allege the logging permit was acquired illegally as the provincial Forest management Committee never met to give its approval. Instead a false set of minutes were produced and the signature of the Provincial Administrator was forged.

That matter has reportedly been referred to the police and a local PNG Forest Authority officer has been arrested.

This is not though the first time the forests of the Musa Foru region have been a target for unscrupulous logging companies.

The two companies injuncted from conducting further logging operations in Musa Foru, Musa Century Limited and Musa Valley Management Limited, are no strangers to allegations of illegal and unscrupulous activity in the forests of Oro Province.

In 2009, a 99-year Special Agriculture Business Lease was issued by the Department of Lands over 211,600 hectares of forest in the Musa area designated, Portion 16C. The lease was swiftly and successfully challenged in the courts by a group of landowners who said they had not given their consent for the State to acquire their customary land. The National Court declared the SABL lease unlawful and null and void. The lease was then revoked.

This though was not the end of the matter. The Department of Lands then proceeded to issue a second SABL lease over a larger, 320,060 hectare portion of the forest known as Portion 17C. This portion included all the forest previously covered under the old Portion 16C lease.

The new lease was issued in September 201o to Musa Valley Management Company Limited, a company described in the SABL Commission of Inquiry as being owned by ‘customary landowners residing in Port Moresby’ and being ‘totally isolated to the rest of the landowners living back in the villages’.

Landowners who gave evidence to the Commission of Inquiry said they had not given their consent to the leasing of their customary land. They also alleged fraudulent conduct by government officials and Musa Century, who they claim, obtained signatures by misleading and coercing villagers at night.

The Commission of Inquiry also found that the Department of Agriculture had failed to conduct proper awareness in the SABL area on the proposed oil palm planting and cattle farming operation, and had not obtained landowner consent. The agriculture plan submitted to the Department of Agriculture was also ‘very sketchy and vague’ with ‘no proper and viable implementation schedule’. The Commission of Inquiry concluded Musa Century ‘is not interested in developing the oil palm and cattle project but rather using them as an excuse/guise to obtain a Forest Clearance Authority (FCA) and embark on a full scale logging operations instead.’

The Commission of Inquiry recommended that the SABL be revoked for failure to follow proper process, and for failure to obtain informed consent from the customary landowners. The SABL ‘was improperly and unlawfully granted’ and the sub-lease was ‘deemed to be void and of no effect’.

The Commission of Inquiry described the SABL over Portion 17C, which had been issued to Musa Valley Management, to be ‘a good example’ of the many instances it found ‘of landowner representatives and ILG representatives being manipulated by developers to fast track the issuing of the SABL titles’.

Despite these findings against Musa Century, the company’s registration as a Forest Industry Participant under the Forestry Act was never reviewed or revoked.

The company is owned by the Hong Kong registered Deluxe Investments Limited (50%) and Kem San Go (49%). Deluxe acquired its shares in Musa Century from Kem San Go in 2019.

Kem San Go is also the owner of a number of other logging companies operating in Papua New Guinea. 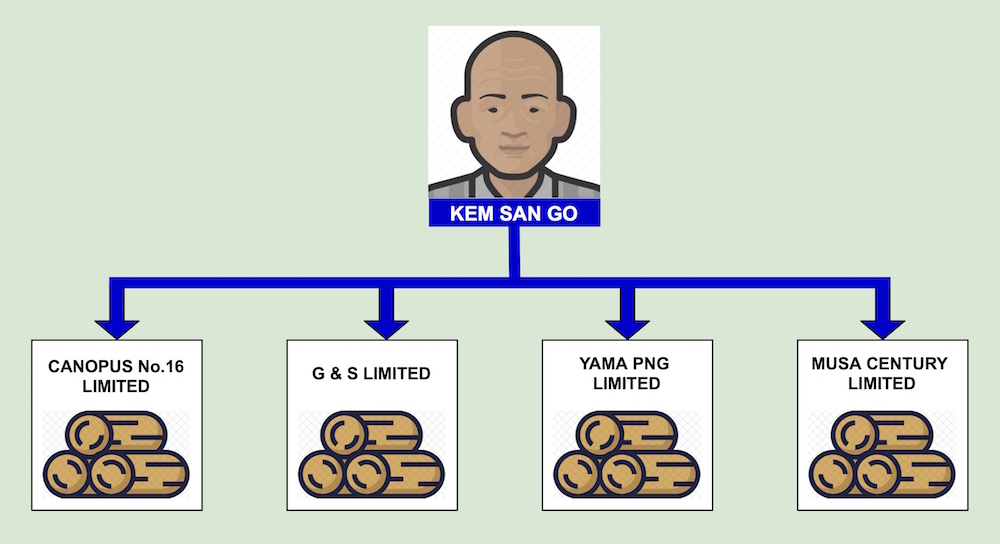 Kem San Go is also the majority owner of Yama PNG Limited with 51% of the issued shares. The other 49% are owned by Sheng-Wen Kao of China. Yama PNG exported 267,918 cubic metres of logs from the Passismanua Block 1 LFA, WNB, between 2012 and 2019.

Kam San Go is, along with Chinese businessman Fei Chen, the joint owner of Supreme Lumber Limited, a manufacturing company registered in 2020.

Since March 2021, Kem San Go has been the sole owner of Supreme Shipping Limited (previously known as Solar Green Limited). Despite the company name, its business is recorded as ‘forestry’.

Before the company was deregistered in 2009, Kem San Go was the sole director of SWT Nikama Limited, a company owned by the convicted fraudster, Eremas Wartoto.

Kem San Go owns 70% of New Century Development Limited. The company has not filed an annual return for any year since 2009.