Foreign nationals can be seen living and working throughout Papua New Guinea, whether in urban centres or even the most remote logging and mining sites. Of course there is nothing necessarily wrong with this. Expatriate workers and their families can bring important new skills and employment opportunities, train local workers and contribute to a vibrant and forward looking society.

But when we see foreign nationals labouring on building sites, wielding chainsaws in our forests, serving in trade stores or driving heavy machinery, all jobs that many Papua New Guinean’s would love to have, it is right that we question the robustness of our immigration laws and how they are enforced.

We should also remember that many of these foreign workers are often themselves the victims of fraud or abuse, as the case of Bangladeshi national, MD Alamin Shak illustrates.

Documents and other evidence provided to PNGi shows how Mr Shak was apparently lured to Papua New Guinea through a fabricated job offer and was defrauded of K40,000 before being forced to work in a tucker shop. Imprisoned in the store, he says he was subjected to verbal and physical abuse and made to sleep on a mattress on the concrete floor.

The alleged perpetrator of this fraud is Afazuddin Mohammad, another Bangladeshi national and the owner of Sonar Bangla Trading Limited. PHOTO: Afazuddin Mohammad behind the counter in his tucker shop

MD Alamin Shak is a 24 year old University graduate with a Bachelor of Arts degree in business management from Daka University.

After leaving university, Alamin says he worked for 18 months at a large supermarket in the Bangladeshi capital. But the ambitious young man was always looking to extend his career, and he says he jumped at the chance to come to Papua New Guinea, believing he had found his dream job.

According to Alamin, Afazuddin Mohammad told him he owned a shopping mall in PNG and was on a recruitment drive for new staff. Alamin says he was offered the role of Sales and Marketing manager in Port Moresby on a salary of K3,500 a month with free accommodation and food allowance.

The only catch was that Mr Mohammad told him it was very expensive to travel to PNG and Alamin would need to raise K40,000 to cover the costs.

Alamin says he was forced to turn to his parents for help. By selling part of their traditional land and their shop in Daka and taking a bank loan, his parents were able to raise most of the funds, K38,000. The funds were duly sent to Afazuddin Mohammad in PNG with the offer to repay the balance of K2,000 once Alamin started work.

But Mr Mohammad insisted the extra K2,000 had to be paid in advance.

“In September of 2015 I arrived in PNG. As I stepped off the plane and inhaled the unpolluted PNG atmosphere and looked about me I smelt success and better life for me and my family ahead in PNG. I had just stepped into my dream world.

“Mr. Afazuddin was at Jacksons airport to pick me up. As we drove past Vision City Mega Mall my heart leaped thinking this is where I would work or in a similar establishment.

“Instead Afazuddin drove me to some places at the fringes of the city and parked beside a tucker shop. He told me to get my stuff out and go settle into the tucker shop. Flabbergasted I asked whether this was my residential area or place of work. He said “both”.

“My dream world fell apart and I almost lost consciousness. I asked “Where is the shopping Centre”, He said “this is the shopping centre” I was lost for words and moreover lost in a strange country. He barked at me to stop asking questions and settle in. As I was unpacking my luggage I told Afazuddin that it only cost about K7, 000.00 to come to PNG. So I asked what he did with the balance of my money which is about K33,000.00. Afazuddin coldly starred at me and said that he gave the money to government officials to facilitate my travel into PNG so I must never ever talk about that money again. PHOTO: The Sonar Bangla Trading tucker shop on Tauriganika Drive, Gerehu Stage 2, where Alamin Shak says he was imprisoned and forced to work

MD Alamin Shak says he was given a small empty room with a thin dirty mattress on the bare concrete floor to sleep in. He was forced to wake at 4.00am and cook sausages and ‘flour fish’ for sale in tucker shop ‘kai bar’. After two hours cooking every morning, he opened the shop and served customers all day before counting the takings and cleaning up. His working day ended at 9.30 or 10pm.

Alamin says he was not allowed to eat or take any of the food he cooked each morning. Instead he was allowed just the left over food at the end of the day which he ate before collapsing, exhausted into bed.

After telling his parents of the conditions he was facing, Alamin says Afazuddin Mohammad assaulted him and confiscated his phone. He was not allowed to ever leave the shop. Mr Mohammad locked the perimeter gate and took the keys when he left each evening. Even the shop counter was barricaded with wire mesh, preventing any escape.

After the first month, Alamin says things got even worse:

“After a month of living alone and working under slavery condition Afazuddin brought his brother and another Bangladeshi man to live with me. I thought my condition would improve but it further deteriorated. I was regularly assaulted and forced around to do what they told me to do. They all expected me to do all the hard work while they rested or slept”

In August 2016, almost a year after he arrived in PNG, Alamin managed to escape the tucker shop compound and found sanctuary with other Bangladeshi nationals living in Port Moresby. With their assistance, Alamin says he reported his abuse to an officer at Gerehu police station and to a Dominic Ampa’ou, Manager Compliance and Borders Division, at the immigration department.

However, no official action appears to have been taken against Afazuddin Mohammad, either by the police over the alleged financial fraud or immigration authorities over the alleged fraudulent work permit application. 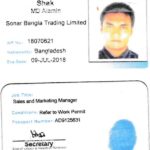 At that time the company had two shareholders, Afazuddin Mohammad and Peter Patho. Although Mohammad, a Bangladeshi citizen, held 51% of the shares and Patho, a Papua New Guinean, 49%, Sonar Bangla Trading was registered as a local PNG company.

Peter Patho though did not retain his shares for very long. According company Board Minutes, in August 2016, Mohammad made the decision to remove Patho as a shareholder, apparently as Patho ‘had not contributed financially towards the running of the business since its inception’.

Although it is not at all clear that Mohammad, as ‘Director. Chairman & Secretary’ had the legal power to remove Patho as a shareholder, a notice of share transfer was duly lodged with the IPA. According to the notice, Patho’s shares were transferred to Afazuddin Mohammad, making him the sole owner.

There is another anomaly in the records of Sonar Bangla Trading. In its Annual Return for 2015, the only one it has filed, it says in that year the company had no full-time and no part-time employees and no assets and no liabilities.

Yet we know from the documentation, Sonar Bangla Trading was granted a Foreigner Work Permit to employ MD Alamin Shak in July 2015 and Mr Shak arrived in Port Moresby and started work in September 2015. Why is he not included as an employee in the Annual Return? And how can a company with no assets and no employees apply for and be granted a foreigner work permit?

It is an offence for a director to lodge false or misleading returns with the Registrar of Companies.

Who will take action?

In this report we have presented clear, documented evidence of immigration and financial fraud and an allegation that immigration officials accept bribes.

The same information has already been given to the police and immigration authorities by the alleged victim. But no action has been taken

If our authorities are not prepared to investigate and take the appropriate action against those implicated in serious offences, then what hope is there for anyone is the victim of similar abuse and what hope is there that PNG will ever be able to control its borders and protect the rights and interests of its own citizens as well as those who come here from abroad?