Farmers Swindled out of K2 Million by Dept Secretaries

On paper former Departmental Secretary, Valentine Kambori, has an impressive resume. Most recently he has been appointed by the Marape Government to lead on its National Agriculture Sector Plan. Kambori is also  a senior adviser to the Department of Agriculture and Livestock. Agriculture Minister John Simon has selected Kambori to help fast-track a K2 billion integrated agricultural industrial park project with China Railway International.

Kambori’s previous career highlights include Director-General of the National Agriculture Research Institution and Secretary for the Department of National Planning and Rural Development.

The judgement of the National and Supreme Court’s Justice Hartshorn, concludes Wahgi Mek Plantations Ltd was a victim of what appears to be a crude swindle in which Mr Kambori is implicated, as the then Secretary for National Planning and Monitoring, alongside Mathew Wela Kanua, who at the relevant time was Secretary for Agriculture and Livestock.

The story begins in December 2002. A K2 million grant was allocated by the Department of National Planning and Rural Development for the rehabilitation of Waghi Mek coffee plantations. They are situated in what is now Jiwaka Province. According to the National Court, ‘this was on the directive of the then Chief Secretary to the National Government, Mr. Joshua Kalinoe’.

Waghi Mek Plantations Ltd owned the majority of coffee plantations in Waghi Valley. It was the company due the K2 million payment. This money then was to be used to support rural development and livelihoods in the area.

But the payment never arrived. The reason for this lies in what appears to be a crude swindle, which is documented in the judgement of Justice Hartshorn.

On 23 January 2003, shortly after the Department of National Planning received a directive to allocate K2 million to Waghi Mek Plantations Ltd, a company named Whagi Mek Holding Limited was incorporated. According to Justice Hartshorn it ‘did not own or have any interest in any coffee plantations in the Waghi Valley‘. 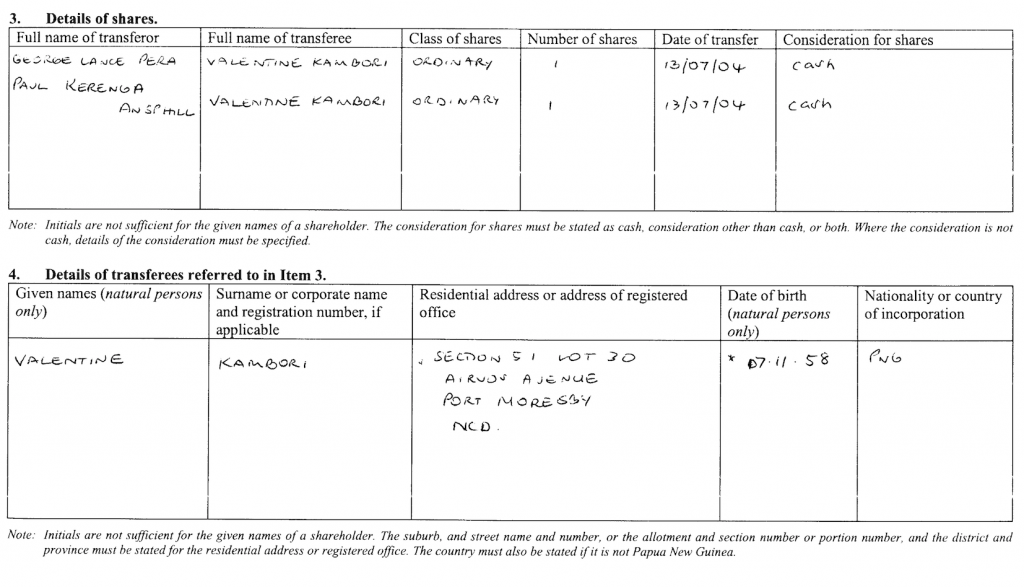 According to Justice Hartshorn, all four shareholders were public officers. While PNGi does not have access to department HR records to verify this in all four cases, it can be confirmed off the public record that Valentine Kambori was Secretary for National Planning and Rural Development during this period, while Mathew Wela Kanua was Secretary for Agriculture and Livestock. 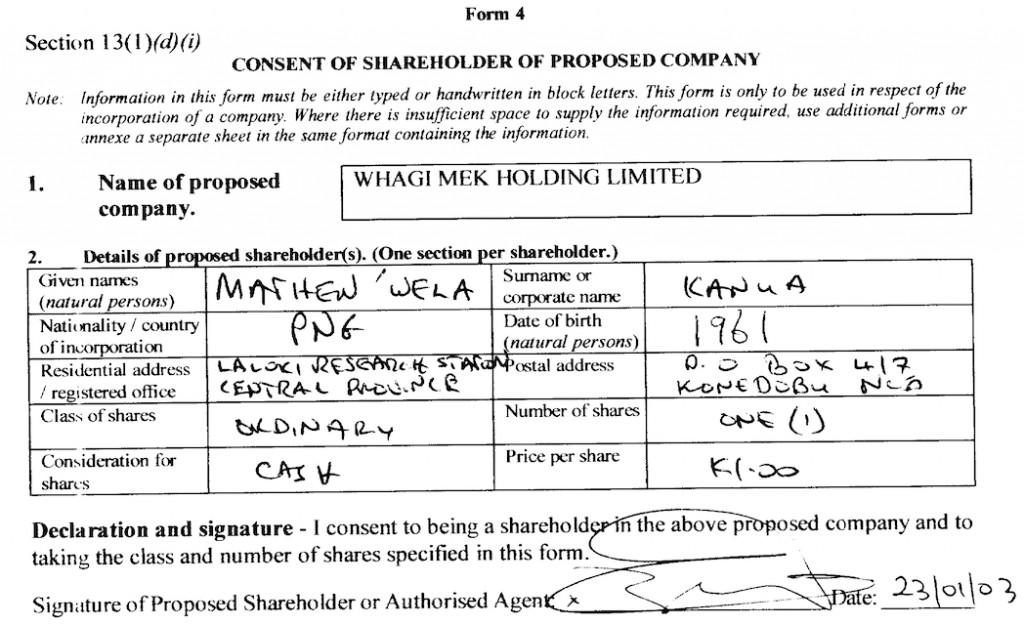 Set against this backdrop, the reader can probably anticipate what happened next.

In 2003, the K2 million due to Waghi Mek Plantations Ltd was instead paid into the Bank South Pacific account 1000950910 belonging to Whagi Mek Holding Limited. Justice Hartshorn concludes that this was intentional and wrongful, and not an accidental mis-payment. 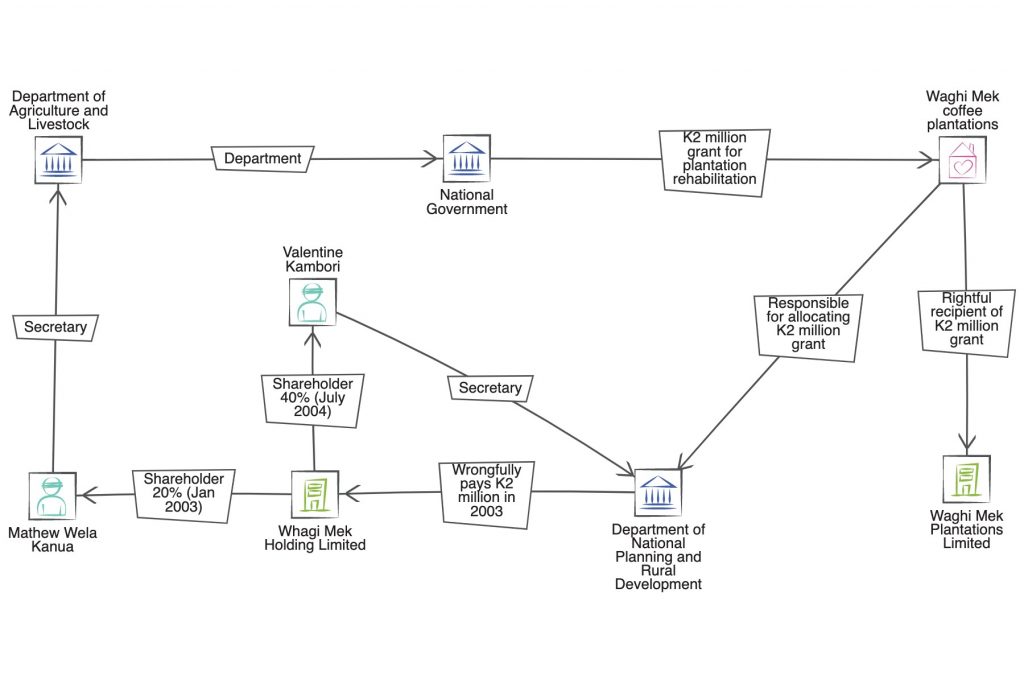 To remedy this injustice the National Court concluded that the recipient company that wrongfully received the payment, held it on constructive trust for the correct party, Waghi Mek Plantations Limited. A constructive trust is a equitable tool available to the court where ‘it would be unconscionable for the owner of property (usually but not necessarily the legal estate) to assert his own beneficial interest in the property and deny the beneficial interest of another’.

It appears now that only K622,847.99 remains left in the account. The Court has ordered that this remaining amount be transferred to Waghi Mek Plantations Limited.

Justice Hartshorn’s judgement raises a number of issues in urgent need of action.

First, this matter should be referred to the RPNGC Anti-Fraud Squad for immediate, thorough criminal investigation to determine whether a successful prosecution could take place against any of Whagi Mek Holding Limited’s shareholders.

There is also a need to carefully scrutinise the procurement arrangements and contractual terms currently governing Valentine Kambori’s advisory contract with the Department of Agriculture and Livestock. Although it cannot be inferred the appointment is wrongful or illegal, the red flags from this case require heightened vigilance. Though given the National Court’s conclusion it is hard to see at the moment how the government could in good conscience retain Mr Kambori as a consultant.

While this scandal may not have been created by the Marape Government, it is difficult to see how the National Court’s conclusions could be overlooked by any government looking to raise public finance standards.