Contents
Skip to main report
Update on pilot, a news story from 1995

Update 30/7/20: News reports state the pilot of the crashed Cessna light aircraft is David John Cutmore. Media reports from 1995 state that an individual with the same name was jailed in New Zealand for bird smuggling. He was dubbed the ‘bumbling birdman’ after ‘he was in a rented light plane close to Lord Howe Island on a hair-raising trip to New Zealand with an illegal cargo of galahs and other endangered Australian birds. An associate back in Brisbane, with questionable mechanical skills, had taken out four of the aircraft’s six seats to fit long-range fuel tanks. Cutmore assumed his mate knew what he was doing. Near Lord Howe, Cutmore turned the switch on the reserve tanks. Somehow the system was working in reverse and instead of the fuel going to the engines, it began flooding the other way’. Cutmore told courts ‘The fuel was pouring into the cabin … I had to turn back. I couldn’t land at Lord Howe because of what I was carrying . . . we would have been caught with a planeload of birds’.

According to media reports, the plane was trying to land on a makeshift airstrip, not far from the PNG LNG processing plant, on Sunday 26 July, when it crashed.

While the pilot and any passengers had disappeared from the scene before police and crash investigators arrived, it is reported police have found traces of cocaine at the crash site. This could be consistent with reports the aircrafts transponder had been switched off, its flight plan was not registered and it was trying to land on a makeshift runway. PNGi has not though seen any concrete and independent evidence to verify this claim.

Police investigators are said to be working in collaboration with Australia Federal Police, PNG Air Accident Investigation Commission and Airport Services to piece together the puzzle of this mysterious crash.

In the meantime, PNGi has been examining the public record to try and find out more and we have uncovered plenty of interesting facts.

The crashed plane is a Cessna 402C twin engined plane. The aircrafts unique registration code, VH-TSI, is clearly visible in the photographs from the crash site. The VH prefix, indicates the plane is registered in Australia.

According to the flight tracking website, flightradar24, VH-TSI made two flights on 26 July, both from Mareeba airport on the Atherton Tablelands in northern Queensland.

The first flight was a circular trip, that started and ended in Mareeba and lasted 51 minutes. The second flight was never completed.

Although pictures from the crash site show the aircraft is painted in the colours of the West Australian based Goldfield Air Services, and the company logo is clearly visible on the plane’s tail, records indicate GAS is not the current owner.

According to Australian Civil Aviation Safety Authority records, the current registered owner of the Cessna aircraft VH-TSI, is Ravenpol No. 69 Limited, a company based in Port Moresby. 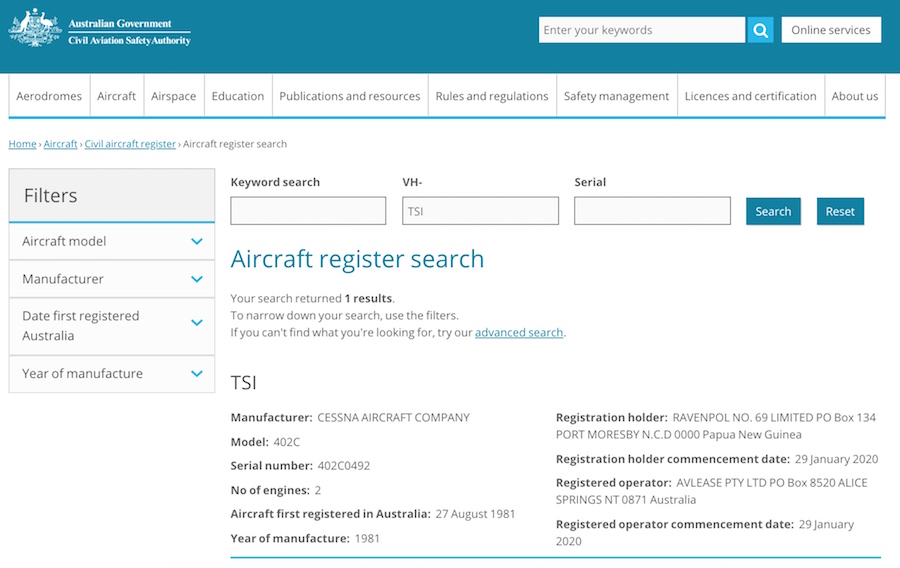 According to the records of the Investment Promotion Authority, Ravenpol No. 69 is a company owned by a Geoffrey Paul Bull. 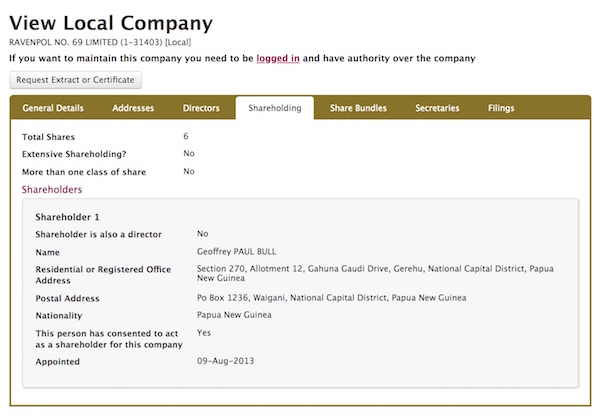 According to the latest Annual Return filed by Ravenpol No. 69, which is for 2015, the company is involved in building and construction and has 4 full-time staff. The declared assets were K420,000 and liabilities K35,000. The return was signed as true and correct by Geoffrey Paul Bull himself.

In 2016, it was reported in the media that Ravenpol No.69 had constructed 5 duplex houses for the Royal PNG Constabulary at Kudjip in Jiwaka province under a contract awarded by the Central Supply and Tenders Board. 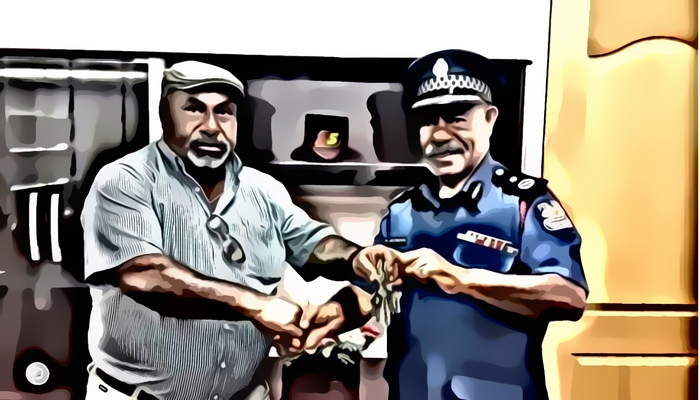 According to the records of the Integrity of Political Parties and Candidates Commission, a Geoffrey Bull is the President of the People’s Democratic Movement (PDM). The party’s only current serving Member of Parliament is the veteran politician and Governor for Western Highlands, Paias Wingti. 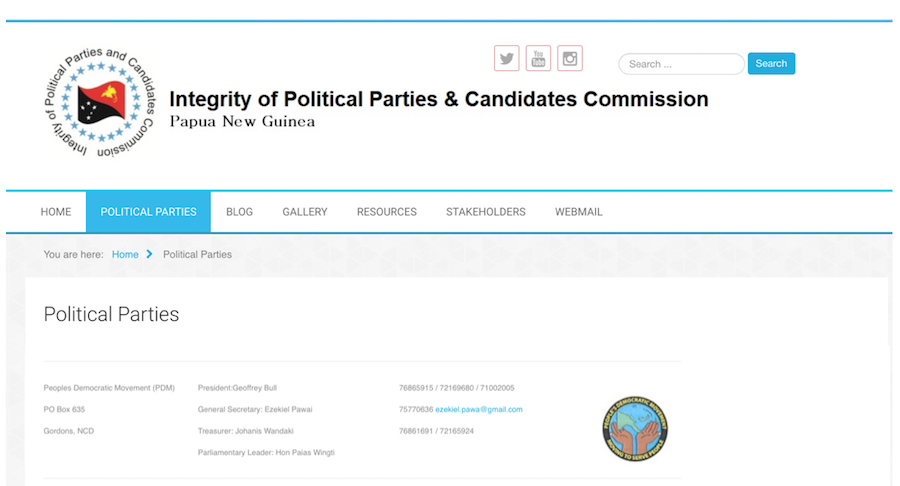 PNGi has not been able to establish and is not asserting that the Geoffrey Paul Bull who owns Ravenpol No. 69 is one and the same as the Geoffrey Bull, President of the PDM, that will be for others to look into and establish or reject. 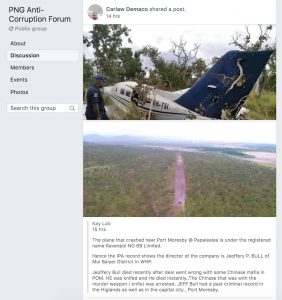 In a further twist, there are unconfirmed social media reports that ‘Jeoffrey P. Bull’, the owner of Ravenpol No. 69, recently died of a stab wound inflicted by an unnamed Chinese man. The, death it is claimed, was the result of a ‘deal went wrong with some Chinese mafia’. A report on ABC radio, suggests the death may have occurred last year, before the Cessna aircraft was registered to Ravenpol No. 69.

Returning to the Australian CASA records, they show the current registered operator of the aircraft VH-TSI, as a company by the name of Avlease Pty Ltd, based in Alice Springs in northern Australia.

According to the records of the Australian Securities and Investments Commission, Avlease Pty Ltd is registered in Victoria and based in Alice Springs. It is owned by two other companies, V M Carter Pty Ltd (which holds 20 shares) and Ians Holdings Pty Ltd (10 shares). The only listed Director of Avlease is an Ian Peter Scheyer.

Beyond the CASA record, there is no evidence to suggest Avlease or its owners were in any way involved in the final flight of VH-TSI. Indeed, Ian Scheyer has told ABC Radio, “hand on my heart” Avlease has never operated the aircraft and he cannot explain how his company came to be listed on the CASA register.

All the material in this post are matters of public record. PNGi is not suggesting or alleging any wrongdoing by any of the people or companies named, we are simply pointing out their apparent connections to the aircraft at the centre of the crash mystery.

It is for the police and other authorities to now investigate and establish who was flying the aircraft, the purpose of the flight, whether there were any passengers or cargo and whether any laws have been broken.

Download all
In this article
Update on pilot, a news story from 1995
Back to beginning of article