Billions of kina derived from natural resource sales earmarked for landowners is piped through a web of companies en-route to their ultimate intended beneficiary, the designated landowning communities.

The model is simple enough. A major oil, gas or mineral development is required to pay landowners a certain share of the profits and royalties. These payments are made to a limited liability company registered here in Papua New Guinea. The company acts as a trustee fund manager for these revenues. Shares in these companies are held on trust by a state enterprise, the Mineral Resources Development Company (MRDC).

The MRDC manages these funds, investing them, ostensibly in order to ensure a sustainable long term return to landowner communities, which is distributed through dividend payments. MRDC charges landowners sizeable annual fees to manage these funds on their behalf.

The problem is this corporate piping is in a significant state of disrepair, while some pipes are broken. And thus to extend the metaphor, we have no idea where the funds are flowing, how much is finding its way to landowners, and how much is being lost to mismanagement or potentially, abuse. The blame for this parlous state of affairs lies in chief part with the MRDC and its senior management. 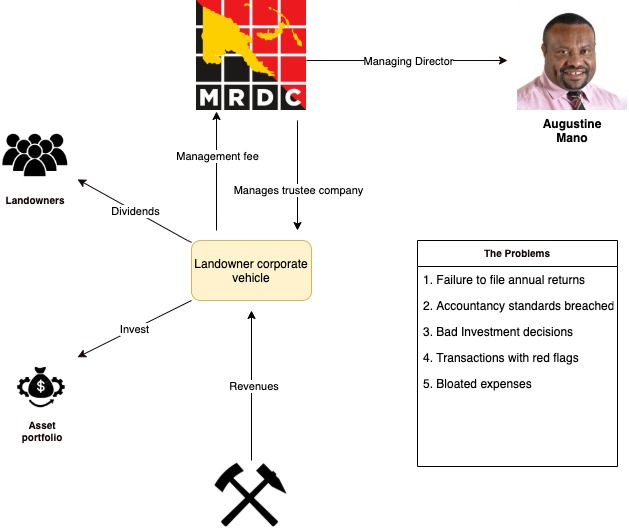 Even a cursory examination of the corporate piping through which billions of kina is flushed reveals a large volume of red flags, which in itself should be a national scandal and a prompt for a commission of inquiry.

One example is Petroleum Resources Kutubu Limited which manages interests in various petroleum/gas projects on behalf of landowners from the Southern Highlands Province. Its last annual return filed with the corporate register covers the year 2015. This means from 2016-2021 there is currently a financial blackout. We have no idea what is going on inside the financial arterial system of a company that is suppose to be managing funds on trust for the benefit of landowning communities.

According to MRDC’s General Counsel this concerning state of affairs applies to a range of companies managed by the MRDC on behalf of landowning communities.

Image: MRDC has informed the Corporate Registrar it is hopelessly behind on financial reporting requirements entrusted to it, for a considerable fee.

What does the 2015 audited annual return for Petroleum Resources Kutubu Limited tell us?

As a result Deloitte were forced to issue an ‘adverse opinion’, a declaration also levelled against a much larger number of landowner companies managed by the MRDC. 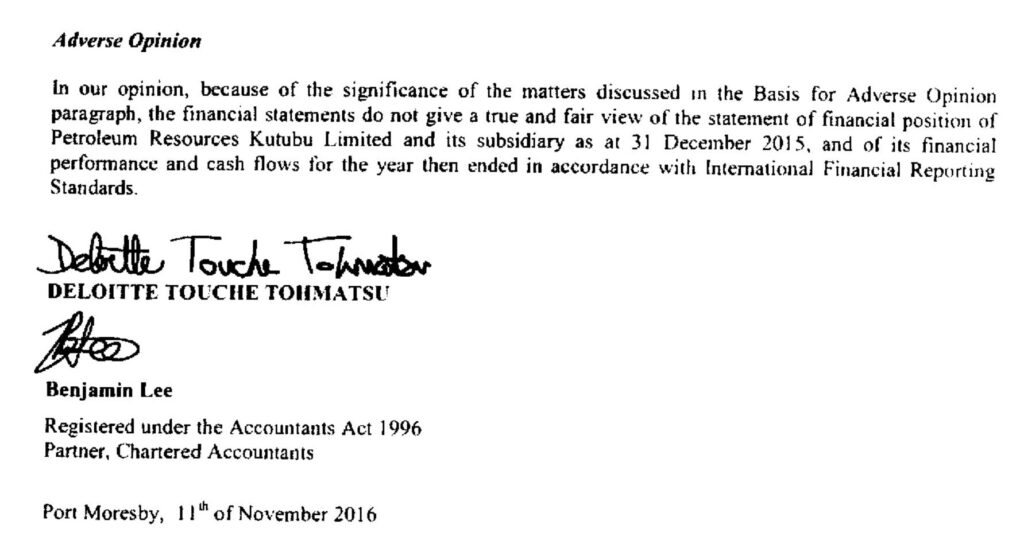 The total revenue declared by Petroleum Resources Kutubu for 2015 is K216 million, with a gross profit of K116 million.  Its total assets in 2015 were K1.7 billion, in the same year total revenues collected by the government was K14 billion, which gives a sense of the scale of the assets under MRDC management. The company paid out K25.6 million in dividends during 2015.

Given this is just one of the spigots which resource revenues flow through, it gives a sense of the monstrous size of the revenues falling under the management of the MRDC. And given the sheer scale, it is possible for a significant volume of landowner funds to be squandered unnecessarily, whilst still paying out dividends to landowner communities.

A further K7.7 million is spent by Petroleum Resources Kutubu on Directors fees, while K1.5 million is allocated to Director retirement benefits.  In 2015 Petroleum Resources Kutubu Directors included MRDC chief Augustine Mano. In other words Mano is paid a salary package by the MDRC as Managing Director, while it appears from various financial returns filed by trustee companies managed by the MRDC Mano is also earning Directorship fees in these MRDC managed companies.

This raises serious questions over whether individuals appointed to the board of a fund manager for landowners, on the basis of their public position rather than private expertise, ought to be earning any additional remuneration for this public service role.

Then comes the management fees charged by MRDC. In total the management fee charged by MRDC for 2015 was K6.25 million. It is worth keeping in mind here the MRDC manages dozens of landowner companies, earning it tens of million in Kina. This does not include the additional fees MRDC executives earn through  directorships they have acquired as a result of their public position in the MRDC.

The Auditor General has recently raised concerns over how MRDC is spending these revenues, including on  Director fees (K1.8 million) for a Board made up of governmental departmental heads, undisclosed remuneration packages paid to senior MRDC management (an opaque arrangement criticised by the AGO), and lavish overseas travel (K2.2 million).

In total Director fees and benefits, and management fees for Petroleum Resources Kutubu totalled K15.45 million for 2015. If we add to this the public relations expenses the total comes to K33 million. This begs the question as to who actually are the principal beneficiaries of Petroleum Resources Kutubu, landowners or the public officials ostensibly managing and overseeing these entities, and seemingly not very well according to Deloitte.

A further K9.4 million is reported byPetroleum Resources Kutubu as ‘other operating expenses’. The total for 2015 is now K42.5 million (compared to landowner dividends of K25.6 million).

From Petroleum Resources Kutubu’s assets, the 2015 audit reveals it has K113 million in shares in Pacific Place Trust, Hevilift, Pacific International Hospital, Star Mountain Plaza and Pacific Balanced Trust. Petroleum Resources Kutubu has a further K346,153,800 in BSP shares. The substantial interest held in BSP by MRDC managed entities, appears to have got its chief Augustine Mano a lucrative position on the BSP Board where he was earning an additional K340,652 in Director fees.

One of Kutubu’s biggest investments is K43 million which has been plumbed into the controversial Star Mountain Plaza. Transparency International has asked serious questions over the merits of this investment, and the losses it has incurred to date.

Petroleum Resources Kutubu has also kicked in K10 million into an investor pool of K18 million invested in the South Pacific Pearl Resort & Golf Course. A further K33.5 million has been invested in Queental Limited a shell company with one asset at the time the purchase was made, K15 million in land. Former Queental Limited shareholders include then Prime Minister Peter O’Neill, a fact covered in a previous PNGi story. The Petroleum Resources Kutubu Board issued a heated response to that PNGi investigation.

A media release purported to be from Petroleum Resources Kutubu’s (PRK) Chairman, John Kapi Natto, states: ‘The PRK audits by accounting firm Deloitte in 2015 and 2016 clearly stated all the facts around this asset, and did not mention any material concerns on the valuation or any illegality in the transaction.’

This is what Deloitte actually said: 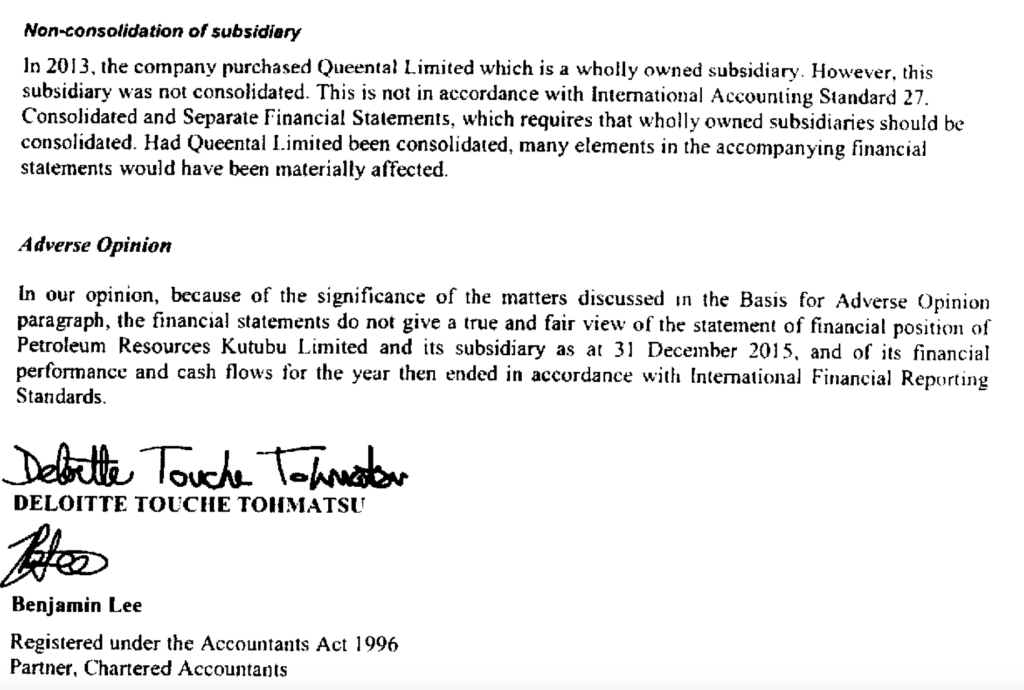 And this is what Deloitte states about the purchase:

Some eight years later, the MRDC provides this sobering image of the project which Kutubu’s Board promises will be turned into a world class development. 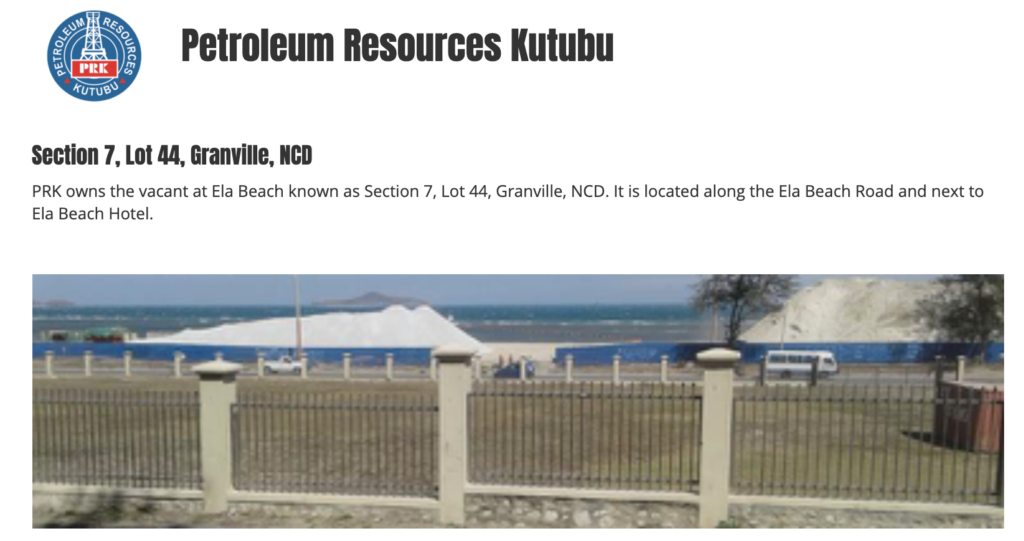 We do not know what  John Kapi Natto’s current remuneration is for his role as Chairman of Petroleum Resources Kutubu, due to the financial blackout already noted. But an annual return for Gas Resource Kutubu covering 2010 indicates the total reward could be large:

His fee for 2010 at today’s currency conversation rate comes to K2 million.

Questionable property investment has been an ongoing problem for MRDC managed entities.

For example, Petroleum Resource Kubutu along with a number of other MRDC managed entities, such as Petroleum Resources Gobe, in 2008 together spent $A7 million on a Cairns property. It was valued in 2011 at just $5.6 million, Deloitte’s notes:

Another MRDC managed entity, Mineral Resources Ok Tedi No.2, in 2007 spent K10 million on purchasing a 2/3 share in Prestige Apartments Limited, a company with net assets valued at K9.5 million.

The total assets owned by Prestige Apartments Limited were valued in the 2007 annual return at K9.5 million. 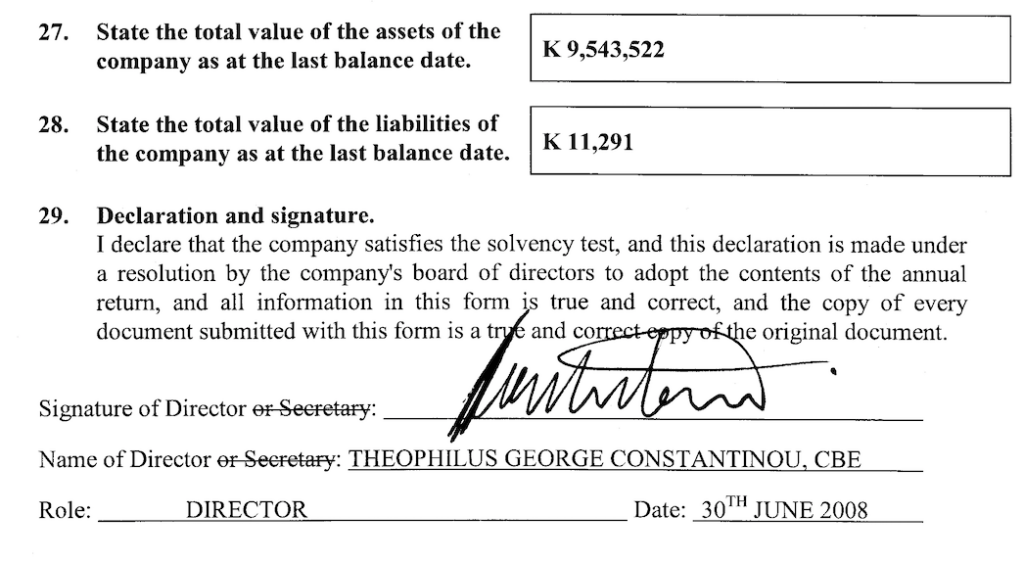 Image: Mineral Resources Ok Tedi No.2 paid K10 million for 2/3 of the shares in a company with assets of K9.5 million.

Added to questions over the acumen behind the above purchases, is criticism levelled by the Auditor General who recently noted ‘investments made by the Mineral Resources Development Company in Taumeasina Resort (Samoa) for 25% share worth K19.347 million in 2016’, had been hit by disasterous losses. The Auditor General remarked: ‘The current value of this investment was nil after loss on acquisition of K1.460 million, impairment loss of K15.488 million and loss for the current year amounting to K2.399 million were considered’.

These various investment decisions may not necessarily be enough in isolation to prompt a Commission of Inquiry, but lets put all these details in full perspective. The MRDC manages dozens of landowner companies on trust for communities. Billions of kina in revenues and assets flow through the hands of MRDC, making it one of the largest fund managers in Papua New Guinea.

The MRDC has been censured by international auditing firms for failing to follow accepted accounting standards. There has been a complete financial blackout since 2015 on numerous MRDC managed entities previous censured by Deloitte.

Nevertheless from the records available there is evidence of sizeable management fees, that appear unconnected with performance. These expenses are compounded by large Director fees, often being earned by public officials already paid a handsome salary from the public purse. And then add to that soup of factors, further eye-watering expenses that seemingly have few benefits for landowners, namely bloated public relations expenditure.

Then there is the wisdom of the investment decisions made by the MRDC. There is at the very least a significant number of red flags suggesting it is not making judicious investment decisions with landowner revenues, that are risk averse and focused on stable long term returns to landowning communities.

Were the beneficiaries which the MRDC is acting on behalf of billionaires with a team of high priced lawyers, accountants, and auditors to defend their interest one might conclude its up to them to hold the MRDC to account. But in this case the beneficiaries are landowning communities who do not have the commercial or technical resources to vigorously defend their interests and hold the MRDC to account.

This places a clear burden on the state to enter the equation and launch a commission of inquiry into the MRDC, and its parlous management of landowner revenues over the past decade. It would cost less than one year’s MRDC expenditure on public relations. Any cost incurred now as a result of such an inquiry would be paid for through savings in years to come.