The irony of it, twenty-one of Papua New Guinea’s top bureaucrats holed up for two days in a hotel owned by one of the country’s biggest logging tycoons while they discuss the implementation of the Nations anti-money laundering action-plan.

The Internal Revenue Commission also has the industry on its radar, accusing logging companies of “egregious” transfer pricing, “entrenched” tax evasion and “deceptive behaviour”. The industry is “one of the most delinquent sectors insofar as tax compliance is concerned“ says the IRC.

Yet last week, the multi-agency National Coordinating Committee on Anti-Money Laundering – comprising, among others, the heads of the Departments of Justice, Foreign Affairs, Finance and Treasury, the National Executive Council, the police and the National Intelligence Organisation – spent two-days updating their action plan closeted in the confines of the Golden Medallion Hotel in Vanimo.

The Golden Medallion is owned a Malaysian businessman, Tiong Sii Huang, whose extensive business interests include a major stake in PNG’s logging industry. 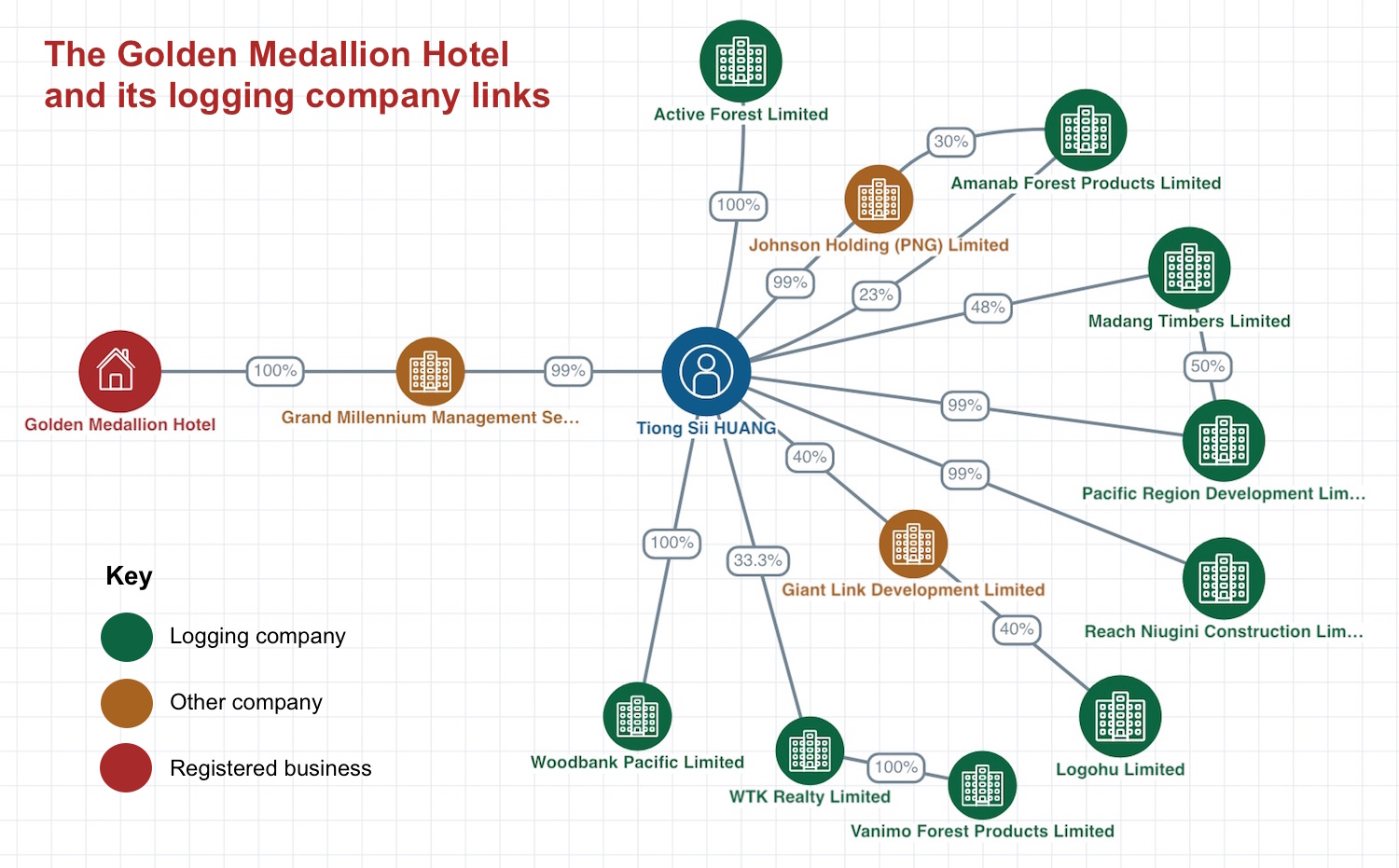 To add to the irony, at the same time the 21-man Committee jetted across the country at great expense to make camp in Vanimo, the Internal Revenue Commission and Finance Department were locked out of their offices in Port Moresby due to unpaid rents!

In 2017, the Bank of Papua New Guinea published a Money Laundering and Financing of Terrorism National Risk Assessment. The report describes the logging sector as a high-risk industry for money laundering.

The report finds “there are strong indicators of large-scale corruption and illegal logging in the forestry sector in PNG, which result in high levels of proceeds of crime”.

According to the Bank of PNG report, “it is widely accepted that the problem [of illegal logging] is widespread and the lost revenue is extensive.”

Indeed, just as the AML Committee members were heading home from Vanimo, a report in The Guardian, accused one of Mr Huang’s companies, Woodbank Pacific, of unlawfully destroying an area of forest in Madang that locals had designated as a conservation area and which contained a sacred burial site.

According to the Bank of PNG, by 2017 the risks of money laundering associated with logging had led at least one commercial bank, believed to be ANZ, to “institute a policy of not dealing with companies involved in the logging industry”.

Since then, BSP has also closed the accounts of at least thirty logging companies due to the money laundering risks and a recent report suggests similar action by Kina Bank.

PNGi has identified twenty-six registered companies which  are either wholly or partly owned by Tiong Sii Huang, the owner of The Golden Medallion hotel. The companies include nine logging companies. According to data collected by Swiss company SGS, over their lifetimes those nine logging companies have exported more than 8.5 million cubic metres of logs, valued at US$850 million. The logs were harvested from 27 different logging concessions spread across eight Provinces. 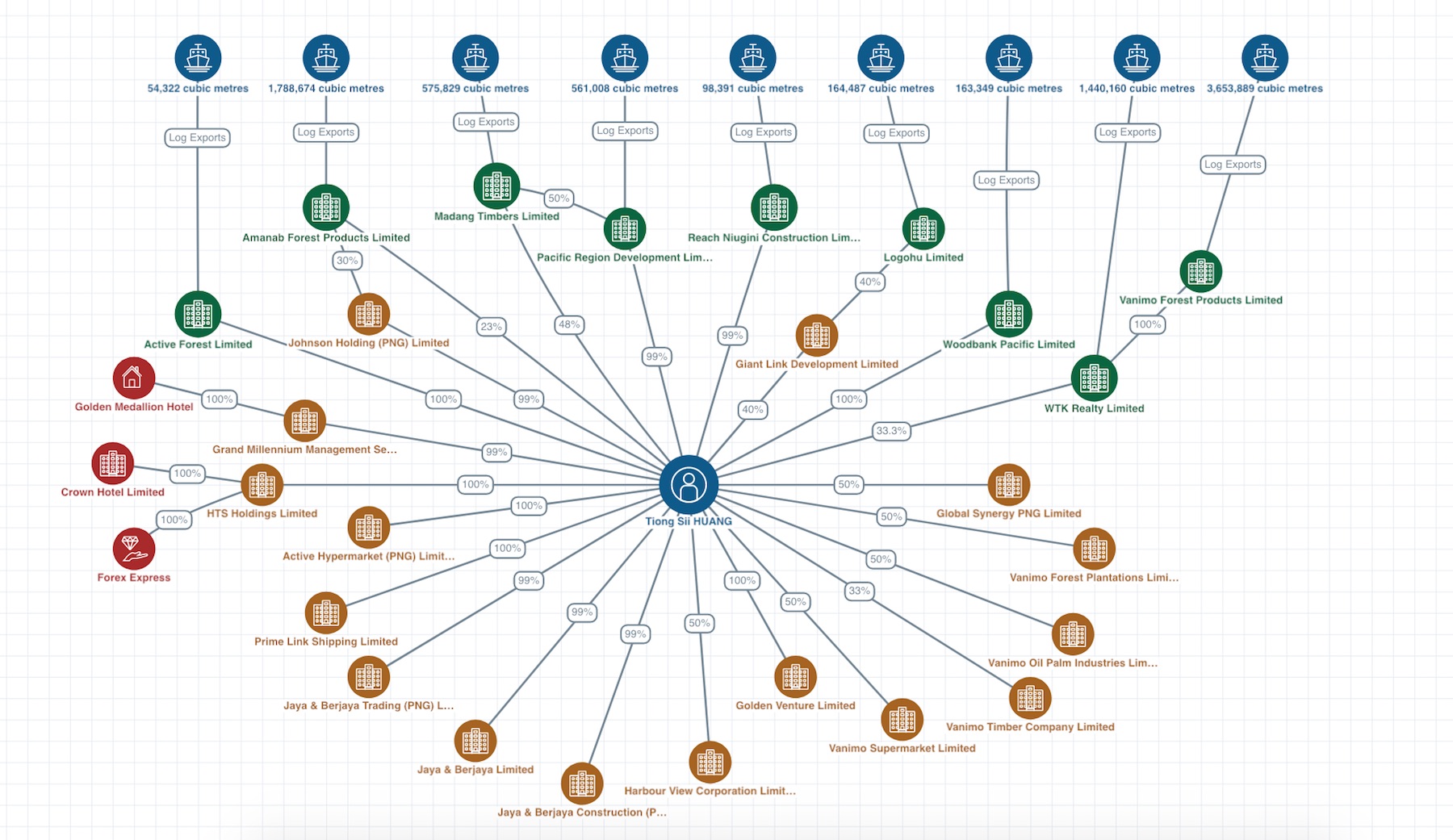 It is not just government officers and bureaucrats that like to avail themselves of the hospitality offered by the Golden Medallion. In 2020, the hotel hosted the Opposition camp during moves to unseat the Prime Minister, James Marape. As is usual in PNG politics, nobody was available to explain the source of the funds that paid for the airfares and hotel accommodation.