What would you do as the Prime Minister – upon assuming the captain’s seat you discover a statutory authority mired in mismanagement, lavish spending, tax evasion, fraud and potentially misappropriation, all of which has cost the public over K13 million. Added to that, it is a statutory authority whose actions were so unsightly even the O’Neill government found it beyond the pale and attempted to shut it down?

Well if you are Prime Minister Marape it appears you resurrect the authority and lavish a new budget on its disgraced management.

In a deal personally overseen by the Prime Minister, K1 million has been handed to the Konebada Petroleum Park Authority (KPPA); a statutory body slammed for mismanagement, tax evasion, fraud and embezzlement in reporting by the Public Accounts Committee, the National Research Institute, the Department of Finance and previous exposes published by PNGi.

The KPPA is led by its CEO, Donald Valu, and Managing Director, Samuel Pepena. Valu has been accused by the Department of Finance of being the mastermind of ‘official misappropriation’ of over K10 million in public funds.

The Department of Finance has pursued Donald Valu for the millions in damages it claims he has caused to the State and threatened him with criminal proceedings. However, documents handed to PNGi show how James Marape has taken over control of KPPA from the Minister of Petroleum. In a concerning twist, rather than shut down the authority and hold to account its senior personnel, it appears Prime Minister Marape has negotiated a deal with Donald Valu to reinvent the KPPA as a business arm of the Central Provincial Government.

In today’s investigation the Department of Finance’s pursuit of Donald Valu for financial impropriety and mismanagement is revealed. We also expose how the Prime Minister has chosen to involve himself with Valu and give him control of further public funds.

In April 2019, PNGi exposed serious allegations of misappropriation and mismanagement levelled by senior politicians and bureaucrats against the CEO of Konebada Petroleum Park Authority, Donald Valu.

Documents released by PNGi included a Ministerial Briefing Paper dated 28 March 2019. It details ‘serious misappropriation issues and non-compliance to statutory directions’ that were ‘of grave concern’.

Valu was accused of ‘continuous’ and ‘gross negligence’, ‘unsanctioned and costly’ legal proceedings, and the alleged misappropriation of over K13 million. The paper recommended Valu be immediately suspended as CEO while civil proceedings are taken to recover the K13 million.

At the time, PNGi called on the Prime Minister to tell the public whether Valu would be referred to the police for prosecution and what steps would be taken to recover stolen assets.

What we didn’t know then, but can now reveal, is that in December 2018 the Secretary for Finance, Dr. Ken Ngangan, wrote a letter of demand to Donald Valu, in his capacity as CEO of KPPA. In this letter Ngangan accused Valu of ‘continued contemptuous behaviour’ and demands Valu personally pay K10 million to the Department of Finance by 15 January 2019.

Failure to comply, threatened Ngangan, would result in both civil action against Valu, his senior staff and the ‘fraudulent consultants you used and appointed’, as well as a criminal prosecution.

The K10 million, according to Ngangan, was to make good the losses Valu had caused the State. These losses  included K6 million in taxes fraudulently withheld from the Internal Revenue Commission, K1.5 million in illegal payments made to Valu himself and almost K3 million paid in ‘illegal car hire’. 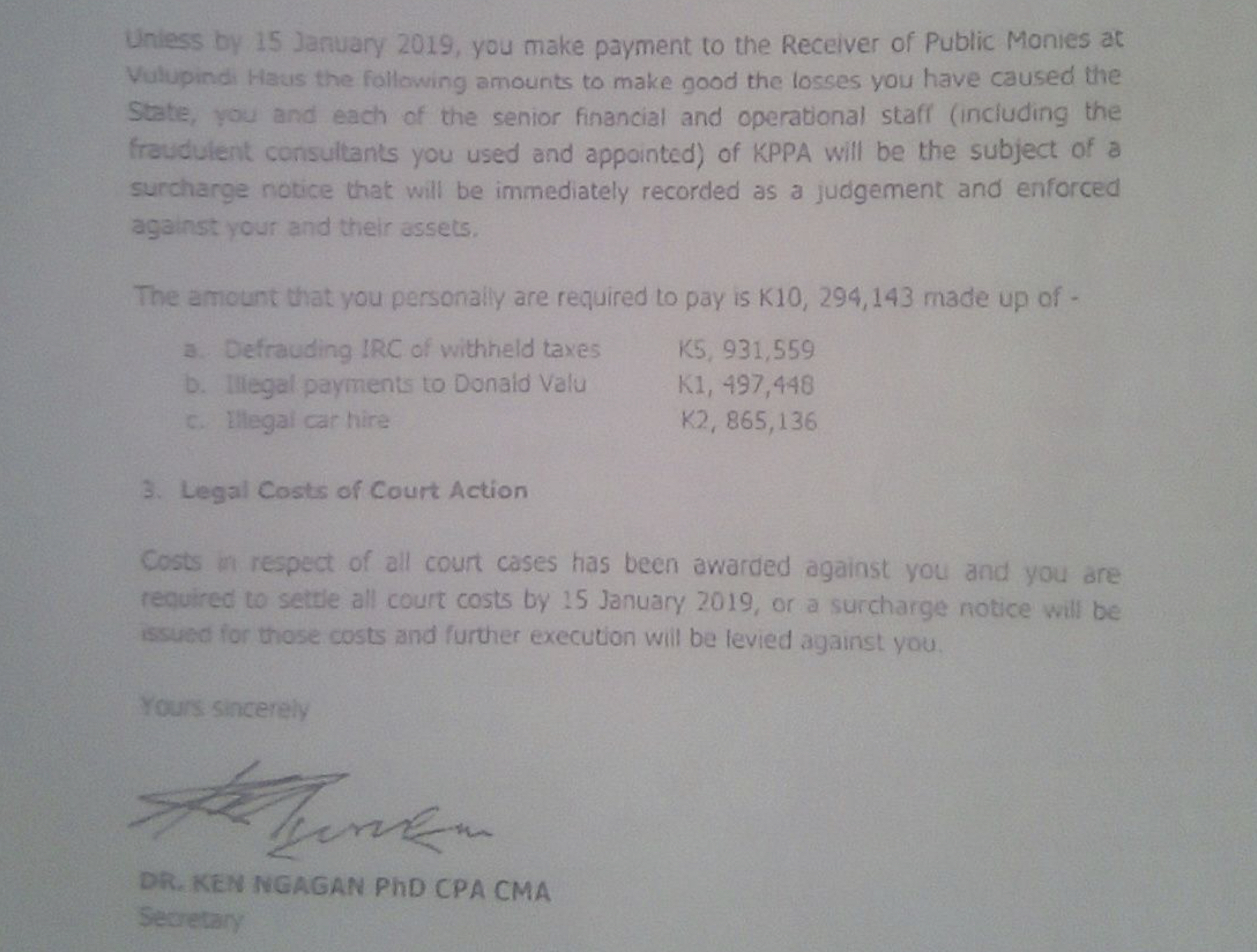 In addition to the K10 million, Ngangan also demanded Valu settle all the State’s legal costs which had been awarded against Valu in his various failed appeals to both the National and Supreme courts to try and avoid disclosure of KPPA’s financial reports, statements and audited accounts.

The demand for repayment was backed up with the threat of civil court action to recover the debt. Ngangan also threatened criminal prosecution with ‘the greatest possible prison and financial penalty’ if Valu did not start complying with Finance Department directives. Those penalties, according to Ngangan, could be as high as 15 years imprisonment and fines of K2 million for each offence.

Despite these very serious allegations against Valu, the threats of civil litigation and criminal charges, recommendations that he be suspended from duty, and further revelations about his involvement in highly suspicious land deals and lavish spending, it appears those at the very very top of government, the Prime Minister and his Chief Secretary, have continued to engage with Valu.

A deal with the Prime Minister

In June 2020, Acting Chief Secretary, Isaac Lupari, wrote a letter on KPPA’s status and the way forward to revive its operations. The letter appears to reveal a meeting between Donald Valu and Prime Minister James Marape that took place on 12 June where they discussed KPPA’s future. 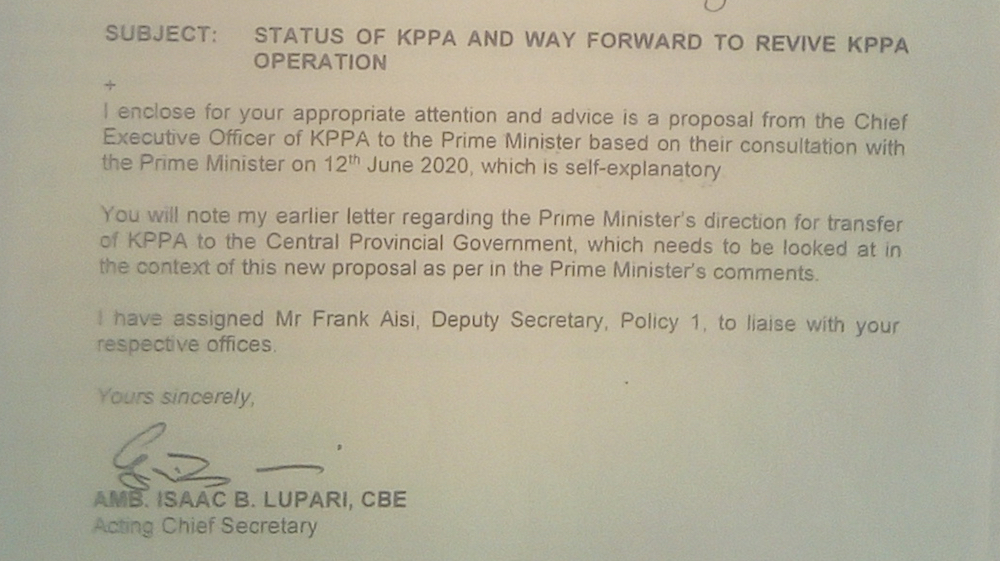 Part of a letter, dated 19 June 2020, from Isaac Lupari referencing a recent meeting between Donald Valu and the Prime Minister

Based on that ‘consultation’ meeting, says Lupari, Valu submitted a proposal to the PM which proposed a way forward for KPPA in the context of Marape’s earlier direction ‘for transfer of KPPA to the Central Provincial Government’.

Lupari’s letter was addressed to the Secretaries for Petroleum and Energy, Treasury, Department of Justice and Finance and seeks their advice on the proposal.

Then, in August 2020, Marape wrote to Kerenga Kua as Minister for Petroleum. Kua was advised of Marape’s decision to transfer KPPA ‘into my [Marape] care’. This, said Marape, was ‘in light of the recent thrush [sic] by the Central Provincial Government to have KPPA as its business agency’.

On 18 September he signed an ‘Amendment to the Determination of Titles and Responsibilities of Ministers’ transferring authority over KPPA from the Minister for Petroleum to himself as Prime Minister. An Amendment notice, dated 1 September, was published in the National Gazette, G625, on 21st September 2020. 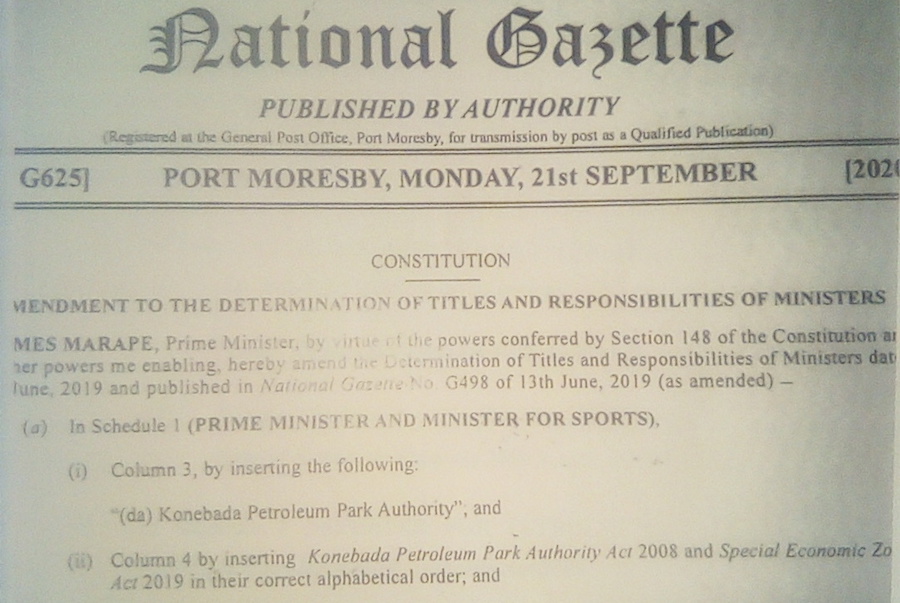 The Prime Minister’s decision to take responsibility for the KPPA was gazetted on 21 September, 2020.

A subsequent Treasury letter dated 18 November, reveals that at the direction of the Prime Minister, KPPA is to be transferred to the Central Provincial Government.

This direction from the Prime Minister is apparently recorded in a hand written footnote added to the proposal submitted by Donald Valu on 16 June.

To ‘facilitate the transition’ of the KPPA to the Central Provincial Government and ‘cater for the transition cost’, the Budget Operations Division in Treasury recommended K1 million be provided to KPPA.

This was in addition to and separate from any monies needed to settle the outstanding liabilities of KPPA.

The K1 million was to be sourced from the Retirement Fund Vote and transferred to the KPPA subsidiary company, Petroleum Park Holdings Limited.

The use of the subsidiary company was necessary according to Treasury, because ‘KPPA’s operating account’ was closed by the Department of Finance after a previous NEC decision to abolish KPPA in 2017.

It is not clear how the K1 million figure was arrived at or who determined its size. The letter from Budget Operation to the Treasury Secretary is ambiguous. The Secretary is asked to:

“Approve K1.0 million from Retirement Fund Vote in Division 2017 to assist the transition cost of KPPA into Central Provincial Government as per the Prime Minister’s directive”

In any event, a copy excerpt from the Treasury Register Book appears to show the K1 million was paid out on 9 December 2020. According to the excerpt the cheque was given to Donald Valu.

This entry in the Treasury Register appears to show a cheque for K1 million was given to Donald Valu.

Valu is after all one of the two shareholders and a director of Petroleum Park Holdings Limited.

Although the Constitution of Petroleum Park Holdings states that its issued shares are held in trust for the KPPA, this is not endorsed on the IPA records and to the casual observer PPH is privately owned by Valu and co-shareholder Samuel Pepena.

And what about the management team behind Petroleum Park Holdings? Besides Valu it includes Managing Director Samuel Pepena (who also serves as a trustee shareholder) and Company Secretary Peter Pena.

These individuals also serve on the board at Regional Resources PNG Ltd. Its Managing Director Koiti Mel, an experienced geologist, paints them in an unflattering light. 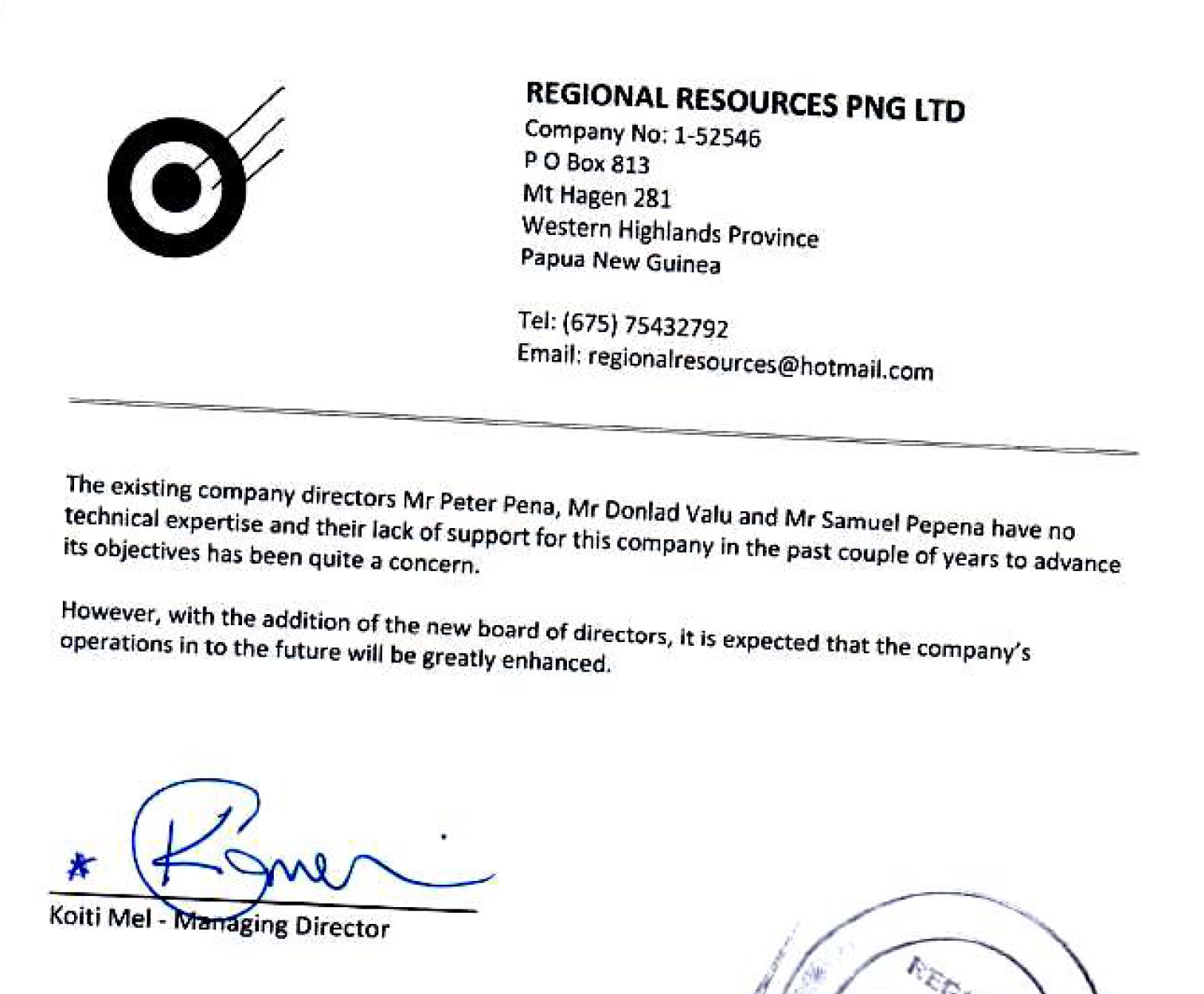 Koiti Mel is not without justification.

The Commission of Inquiry into the Department of Finance recommended the referral of Peter Pena to the Lawyer’s statutory committee for ‘dishonourable, improper and unprofessional behaviour’. It also recommended Pena’s referral to the RPNGC for his role in facilitating an illegal claim against the state on behalf of Andrew Mald. 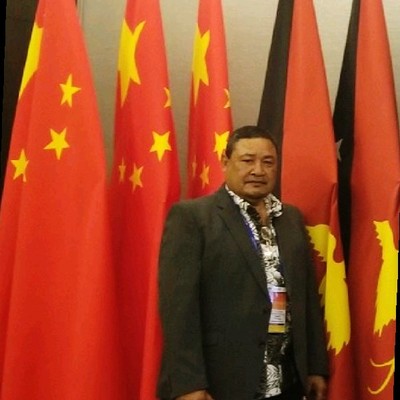 Samuel (Sam) Pepena is a business associate of the Central Province MP Ano Pala, a relationship that stretches back to the 1990s according to the Ombudsman Commission. 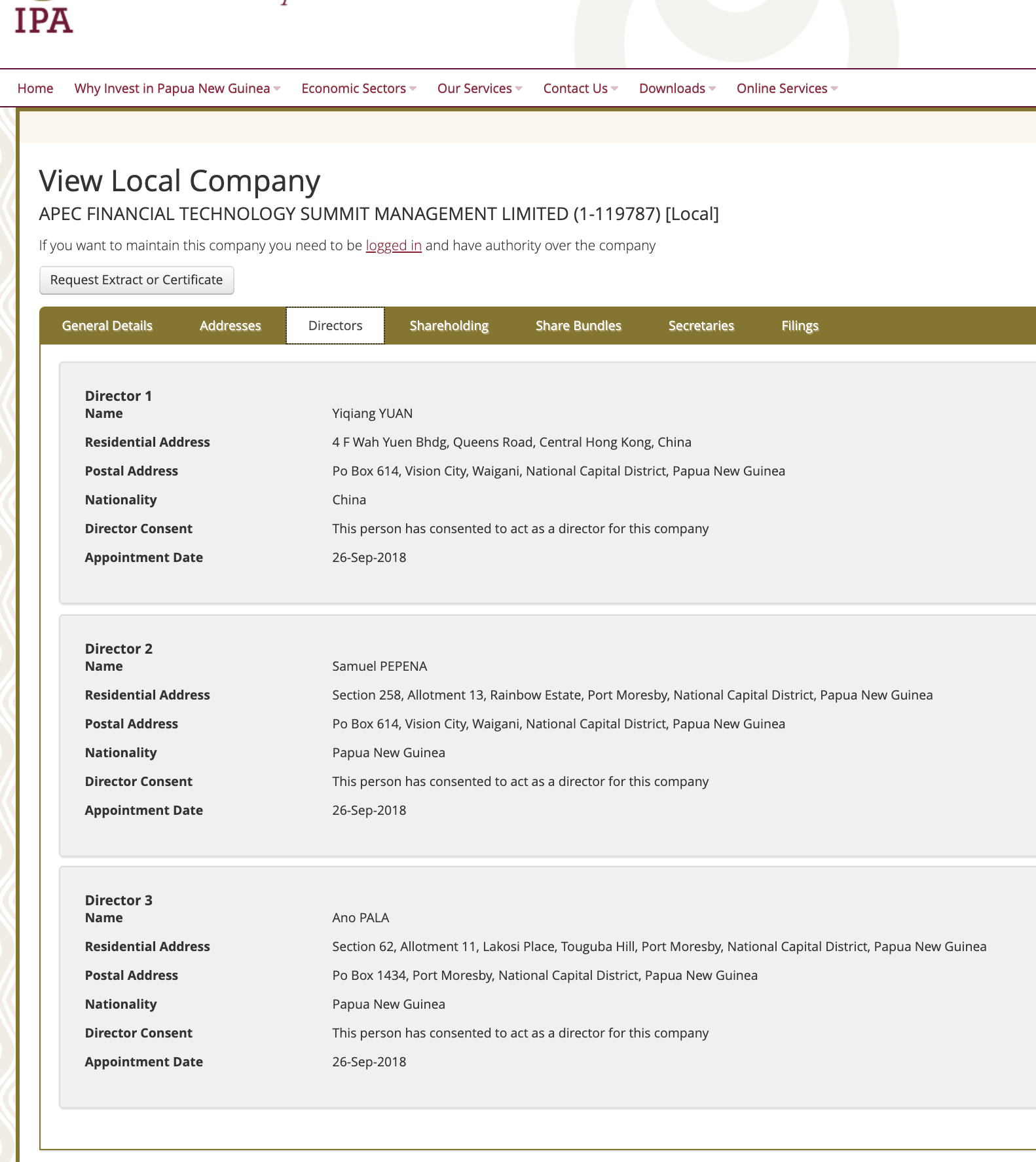 Image: Sam Pepena and Ano Pala sit on APEC Financial’s Board together

Back in the 1990s Pepena was also accused of being part of a pyramid scheme, Money Rain.

A blog post purportedly written by Sam Pepena has rejected all allegations of mismanagement or impropriety directed against him or KPPA. The blog notes:

Only dogs eat their own vomit, over and over again. PNGi must enjoy the world of negativity and bad profiling of public institutions with same old rehashed allegations over and over …

What KPPA is doing at the moment in relation to creation of a Special Economic Zone is of significant benefit to all individuals and corporations who fall within this Zone. KPPA stands to create a highly beneficial fiscal regime for this Zone that will be equal or more competitive to other FTZs in the Asia Pacific Region.

This initiative will be a key innovation of this government, and therefore all the negative media publicity about KPPA’s role regarding the economic activities within the Konebada Petroleum Park is a smear campaign.

Letters and other documents

In October 2019, PNGi asked the question is the Konebada Petroleum Park Authority too corrupt to fall?

This is how we introduced that investigative report:

The report concluded that if the new Marape government was really serious about tackling corruption then there could be no clearer case for police investigation than the operations of the KPPA and the activities of its CEO, Donald Valu.

But, instead of sending in the fraud squad, it appears James Marape has deliberately chosen to embrace Donald Valu as a trusted leader and work with him to not only ensure the continuation of the KPPA but to allow Valu to continue to feed off public funds.

The public deserves and has every right to demand to know why.