For more than twenty-five years, deep in the remote and inaccessible tropical forests of Papua New Guinea, a huge industrial complex has been operating; foreign owned companies have been bulldozing tracks, felling huge trees, cutting logs and dragging them to the coast to be loaded onto ships and sent overseas.

According to official records, since 1993, at least 78 million cubic metres of unprocessed logs, with a declared value of around US$8 billion (K28 billion), have been exported from the forests of PNG.

It is an industry that has attracted much criticism. Rampant corruption was first laid bare in the seminal Barnett Commission of Inquiry, but a new Forestry Act that followed did little to stem the tide.

Allegations of illegal logging, human rights abuses, violence, trespass, environmental damage and unsustainable logging have all be born out in numerous court cases, published reports and even television documentaries; but nothing seemingly has ever changed.

More than one hundred and fifty different companies have been involved in the plunder. Some of them, like Rimbunan Hijau and WTK have become household names, but most remain anonymous and unknown.

Who are the companies that have been involved in the industrial logging of PNG forests? Where have they operated? How much timber have they exported? And on what legal basis?

These are all questions that until now have had no answer; the anonymity of the logging industry is one factor that has allowed it to operate with impunity.

But a new online forest portal, PNGi Forests, is changing that.

The new portal combines data collected from a number of different sources and dating back to 1993 to shine a light onto Papua New Guineas industrial logging industry.

PNGi Forests allows the user to search and filter information on logging companies, their ownership, their logging operations and their exports.

Log export volumes and other data is displayed in interactive graphs and the information can be easily download in csv files.

Users can quickly and easily see which logging companies have been operating in which forests and when, how much timber they have exported and the type of logging licence they have.

Data can also be accessed according to Province, logging concession, concession type and for specific years.

Information can be filtered by individual Province and concession type as well as by logging company or concession.

The Portal also reveals who the logging company shareholders and directors are and the ownership links between the different companies.

The Portal shows the ownership relationship between different logging companies

Adding another layer, the Portal also lists the court cases, official inquiries and published reports the individual logging companies and concessions have been mentioned in.

The Portal lists documents where the logging company or concession has been mentioned.

The user can view and read individual documents online, all without leaving the Portal. 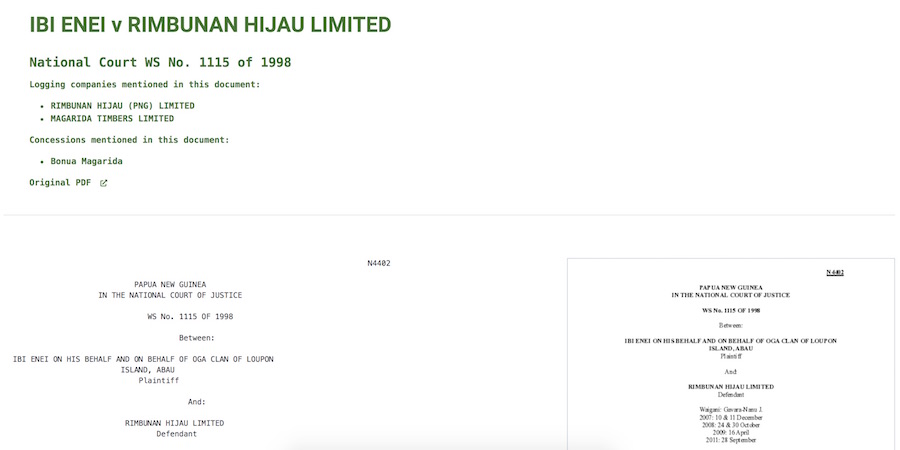 Documents can be viewed and read online