Paraka fails again in his attempts to avoid justice

Notorious lawyer and serial litigator, Paul Paraka, has failed in his latest attempt to avoid justice over an alleged K162 million fraud, committed between 2007 and 2011.

The National Court has refused to grant Paraka a court order to quash or permanently block the indictment against him issued by the Public Prosecutor. This is the second such decision by the court in little over six months.

Yet with every month that passes the chances the prosecution will eventually prove successful grow ever dimmer. Witness memory fades. Documents get lost. People pass away. Police and prosecutors involved in the initial investigation move on or retire. This is a fact any experienced lawyer would know. And it is a common tactic employed by elite defendants, who embark upon never ending appeals and applications.

Already six important witnesses in the case, including three former Attorney Generals and a Solicitor General, have died and will be unable to give evidence. As a result, the State is scrambling to find at least three new witnesses able to produce key documents at trial.

It is alleged the K162 million was stolen by Paraka from the State through its payment of legal bills for services which were never provided. It is further alleged that, rather than the monies being paid direct to Paraka’s law firm, the monies were transferred through the accounts of eight other law firms, which each deducted their own commission before transferring the money on. 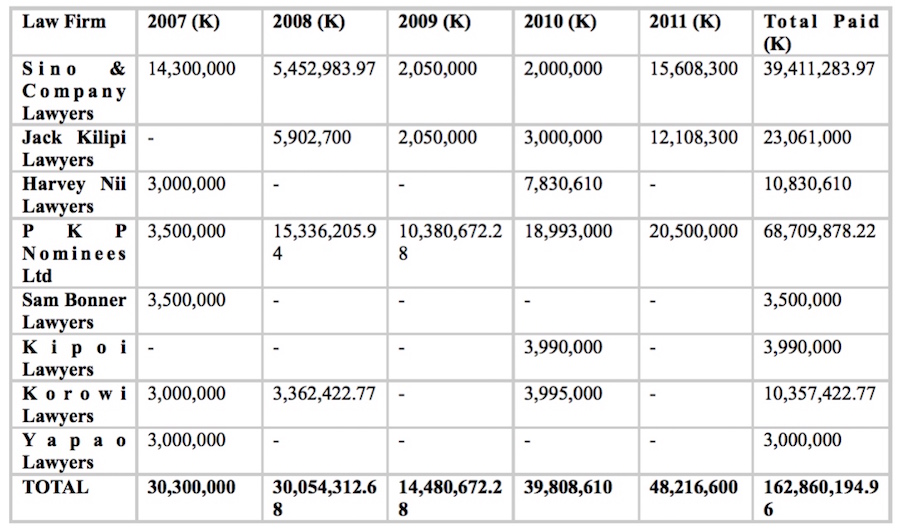 Table: Paul Paraka is alleged to have misappropriated K162 million that was channelled to him via payments to eight separate law firms over a five year period.

It is alleged the payments were made by the Department of Finance without the legally required authorisation of the Attorney General.

In order to try and avoid the criminal charge, Paraka has issued a whole series of unsuccessful court challenges dating back over more than six years. The latest was commenced in 2019, with Paraka mounting dozens of arguments as to why his prosecution was an abuse of process and should be halted.

The first set of arguments were dismissed by the National Court in October 2020, as reported on by PNGi last year.

The second tranche of arguments were heard before Justice Berrigan in March 2021. The court’s decision was handed down on April 23rd, but a copy of that decision has only recently become publicly available.

Paraka contends the charge against him is an abuse of process and calculated to prejudice or embarrass him. He also alleges he is a victim of misuse of the criminal process motivated by jealousy and political interference.

In court, Paraka specifically argued that the Solicitor General had no standing to lay the complaint against him and that Taskforce Sweep which had investigated the complaint was inherently unlawful and unconstitutional and had no lawful authority. Paraka also contended the allegations against him were false and the court process was being abused as the claims were administrative in nature and the the prosecutor was biased. He also alleged the proceedings should be permanently stayed on the basis of delay and because the charge was procedurally defective.

In response, the National Court noted a stay is an extreme remedy of last resort and can only be granted in the most exceptional circumstances where there is no possibility of a fair trail or where it would be unfair to try the accused or it is necessary to protect the integrity of the criminal justice system.

In rejecting the first set of arguments presented by Paraka, Justice Berrigan stated:

“The charges are not administrative in nature. The accused has not established that the investigation was politically motivated or the work of rogue officers. The Solicitor General was entitled to bring a complaint. TFS was not inherently unlawful or unconstitutional. Its investigation was not unlawful. The informant remained at all times a member of the police force with the power to bring criminal charges subject to the direction and control of the Police Commissioner. There was no directive by the Police Commissioner to withdraw the charges at the District Court. More particularly, it has not been demonstrated that the informant acted for an improper purpose or with an ulterior motive, or that he believed the charges to be false. It has not been established that the Public Prosecutor is biased or that he has not exercised his powers objectively, impartially and in accordance with his oath of office. The merits of the case is a matter for trial. The accused has not established that the indictment is calculated to prejudice or embarrass him in his defence to the charge. The accused has not established that the continuance of the proceedings would offend the court’s sense of justice and propriety or would undermine public confidence in the criminal justice system and inevitably bring it into disrepute. On the contrary, there is significant public interest in determining whether or not substantial State funds have been misappropriated.”

The court also dismissed Paraka’s arguments on delay and duplicity.

The court found there had not been any unreasonable delay, that Paraka had not been prejudiced and that indeed much of the delay had been caused by the accused himself and his repeated unsuccessful challenges brought in the District, National and Supreme Courts against the indictment and the proceeding. In total, Paraka has filed at least eight different court challenges and motion applications seeking to prevent the criminal case against him proceeding.

“For obvious reasons it would not be in the interest of justice for an accused person who has taken every avenue from its earliest days at the District Court to stop the continuation of his trial to have his trial stopped because the result of that action has been to delay the proceedings”.

Paraka has also caused other delays. After dismissing the first set of his objections to the indictment in October 2020, the court was due to resume its hearing of the other objections on 12 November. However, the day before the scheduled hearing, Paraka applied for an adjournment as he had apparently only then realised part of his evidence was illegible. A new hearing date was set for  9 December, but on that day Paraka was unwell and the matter was again adjourned, this time until 2021.

There is also another worrying feature of the case against Paraka which is redolent of other high profile cases PNGi has investigated. Despite the delays in the hearing of Paraka’s applications, which afforded the State’s lawyers ample extra time to prepare, and despite the ‘clear directions’ of the Court, the State did not file any submissions arguing against Paraka’s own lengthy arguments in support of his case prior to the hearing on 5 March. In the hearing itself Paraka was therefore able to successfully argue against the court accepting any written submissions at all from the prosecution. The State did make general oral submissions, but these were ‘general in nature’ and ‘did not respond to the particular factual or legal issues raised by the accused’ according to the judge.

Such dereliction of duty by the lawyers for the State, particularly in such a large fraud case, is seemingly indefensible. According to Justice Berrigan, ‘it is hard to imagine a more serious allegation of misappropriation involving a lawyer’, yet the State’s legal team do not seem to have been paying it adequate due attention.

In order to now try and ensure the matter is brought swiftly to trial, Justice Berrigan has issued a series of directions dictating the final administrative steps to be taken and ordering the matter ‘be fixed for trial at the first available date’.

Only time will tell whether yet again a high profile figure will face a diluted prosecution, lacking in rigour, owing in part to the delay tactics employed by the defendant themselves, compounded by the careless approach of the state .