Pruaitch Tribunal Unlikely to Deliver Justice for the People

Minister for Foreign Affairs, Patrick Pruaitch, maybe one step closer to finally answering to allegations of misconduct in office after the Chief Justice announced the appointment of a new Leadership Tribunal.

Pruaitch will not formally be suspended from office though until the Public Prosecutor is able to formally present the allegations to the Tribunal.

Those allegations date back to Pruaitch’s first term in Parliament, more than 15 years ago, when he was Minister for Forests in the government of Michael Somare. It is claimed Pruaitch double dipped on his personal allowances.

The long delays in bringing the Minister before a Leadership Tribunal are the result of ‘multiple appeals’ and ‘piecemeal’ court applications by the Minister, which PNGi laid out in some detail during 2018: ‘Pruaitch Abuses Legal Process to Derail Justice‘.

The Supreme Court has since described those legal manoeuvrings as ‘vexatious’ ’misconceived’, ‘an abuse of process’ and ‘improper and irregular’.

To allow these proceedings to continue would be an affront to the very purpose of the Leadership Code and those whom it is intended to protect, the people of Papua New Guinea.

Although Patrick Pruaitch may not avoid facing a Tribunal, and has goaded the Supreme Court, he has likely achieved two parts of his purpose.

His ‘unreasonable delays’ have already caused ‘serious prejudice’ to the Ombudsman Commission case against him, says the Supreme Court. One witness has died, others will have faded memories and documents may well have gone missing.

In the meantime, Pruaitch has been re-elected to Parliament three times and continued to enjoy all the trappings of high office in various Ministerial roles as our timeline shows: 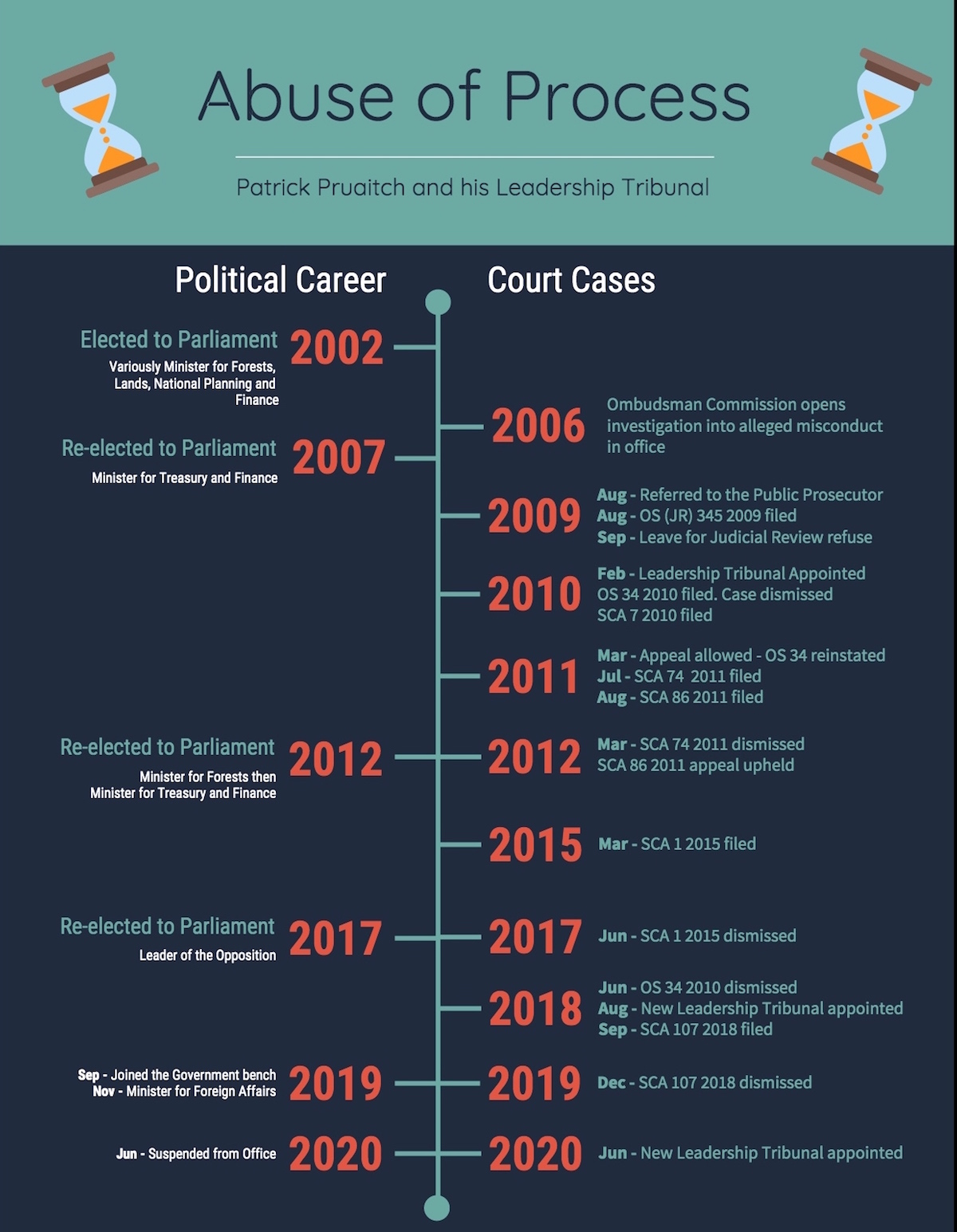 History also shows us that when it comes to sentencing, long delays can favour defendants.

According to a Commission of Inquiry, in the late 1990’s, Maladina orchestrated a number of criminal conspiracies which defrauded the National Provident Fund and its members of millions of kina.

Some of the frauds involved a land valuer, Iori Veraga. Veraga charged excessive fees for work done for the NPF, and overvalued a piece of land owned by Maladina that the latter planned to sell on to the NPF for an exorbitant price. In 2005 Veraga was found guilty on six counts of conspiring with Maladina and misappropriation and he was sentenced to six years jail with hard labour.

Although the court found Veraga personally received K27,455 while Maladina netted K117,500, and Veraga played a ‘secondary’ role while Maladina “called the shots” and “pulled the strings” as the “manipulative member of the conspiratorial criminal cabal”, Veraga was the only one prosecuted; Maladina was never convicted or sentenced for these crimes.

According to Justice Sakora, Maladina “appeared to have had the ears of what may also be colloquially termed ‘the movers and shakers’ in the highest echelons of government”.

Those connections though were not enough to prevent Maladina from being convicted for another conspiracy. The National Court found he defrauded the NPF of K2,650,000 by organising overpayments for the NPF tower construction costs.

Maladina was though able to delay that conviction for more than a decade, first by relocating to Australia, and then employing various legal challenges. The prosecutors too, seemed to drag their feet, all of which played to Maladina’s advantage when it came to sentencing.

The courtplaced great weight on the facts that the monies Maladina had stolen had been paid back (although the court seemed unaware not by Maladina personally but by a benefactor who later claimed the money was outstanding consultancy fees owed to Maladina), others involved in the conspiracy were never charged (although that did not play so well for Veraga in his earlier case), and the long delays between the offence and sentencing.

As a result, Maladina received a suspended jail sentence and was placed on a good behaviour bond for two years. This conviction was subsequently overturned.

Like Maladina, Patrick Pruaitch has apparently already paid back all the money he is alleged to have ‘double-dipped’ during his term as Forest Minister. Presumably, even if the State is able to secure a conviction against him, that will play to his favour too.

As the courts have consistently reiterated, justice delayed is justice denied and it is the people, not the accused who are the losers:

Justice can only be done without much delay and all steps that need to be taken being taken in a timely and orderly fashion. Otherwise, the converse of that is true. Justice delayed is justice denied with those who seek to delay justice ending up gaining. If those who are accused or implicated have nothing to hide they would readily allow the process to take its proper course.… Most of the harm and damage is caused by people who choose to take all sorts of unnecessary issues with the process, without merit most of the time, which results in unnecessary costs and delay. Usually such steps are taken to divert attention from the real issues.