Revealed – The Two MPs Tied to Abuse of Office Scandal

On the 8th of April former Works Secretary (2009-2013) Joel Luma was found guilty of the criminal offence, abuse of office, by the National Court of Papua New Guinea.

The prosecution alleged during 2009-2011, 44 contracts valued at K9.6 million were issued by the then Works Secretary Joel Luma to the company Road Stoa Limited in flagrant violation of the Public Finance (Management) Act. The contracts were for pothole patching material, which is not a minor matter. Potholes plague the nation’s roads and highways, creating lethal hazards that have killed dozens of people. .

The 44 contracts were all invoiced below the Secretary’s financial limit of K300,000, prompting internal concerns that this was an instance of contract splitting (a process where a large contract is deliberately split into smaller contracts in order to fall below the specified financial limit for a financial approver, in this case the Works Secretary). Evidence presented to the court indicates Road Stoa Limited charged between K300 and K330  per bag of QPR pothole filling material, at a time when local products were available for between K40 and K80 per bag.

Oral evidence and exhibits presented to the court as part of the state’s case indicates public servants in the department took great personal risks to try and expose their concerns through the accepted chain of command, some claim they were bullied and threatened to approve the payments.

In a detailed judgement delivered by Justice Berrigan the court found that 16 of these contracts, valued at K4,309,000, were proven to the required criminal standard of being in breach of s92 of the Criminal Code (abuse of office).

The brazen nature with which the Works Secretary abused his power is captured by Justice Berrigan in his judgement summary. It is worth quoting in length:

The contracts approved in 2009 were not reduced to writing [they were oral contracts – PNGi].The contracts approved in 2011 were poorly drafted, contained obvious typographical errors and did not correctly reflect the true nature of the transactions.The contracts were not minor works contracts as described but contracts for the purchase and delivery of stores.The contracts suggested that there had been a tender process when there was none.The certificates of inexpediency issued by the accused [Works Secretary] in support of the 2011 contracts were non-compliant with the Public Finance (Management) Act [certificates of inexpediency are issued in strictly circumscribed national emergency situations where tender would not be practical, they require advance approval from the Central Supply and Tender Board – PNGi].The certificates had not been issued by either the Minister or the CSTB [Central Supply and Tender Board] as required.The accused had no authority to issue such certificates himself.

Justice Berrigan concludes the awards were made in ‘autocratic manner’ through the ‘arbitrary’ application of the Works Secretary’s power. ‘The evidence established beyond reasonable doubt’, Justice Berrigan observes, ‘that the approval of the contracts [by the Works Secretary] was prejudicial to the Independent State of Papua New Guinea because it committed its scarce financial resources to the purchase of products which had not gone through a transparent and accountable procurement process to consider their comparative quality, cost and value for money’.

This of course invites the question – why would the Works Secretary abuse his power in a criminal manner to issue what appear to be inflated contracts to Road Stoa Limited, knowing his conduct was in flagrant breach of the law?

Because the Works Secretary was charged for abuse of office, a ‘little used offence in this jurisdiction’ according to Justice Berrigan, the court did not need to consider Road Stoa Limited or indeed who stands behind the company. But this is not a restriction that need limit PNGi, given that the company knowingly or unknowingly benefited to the tune of K9.6 million through a criminal act committed by the Works Secretary, which was prejudicial to the public interest. 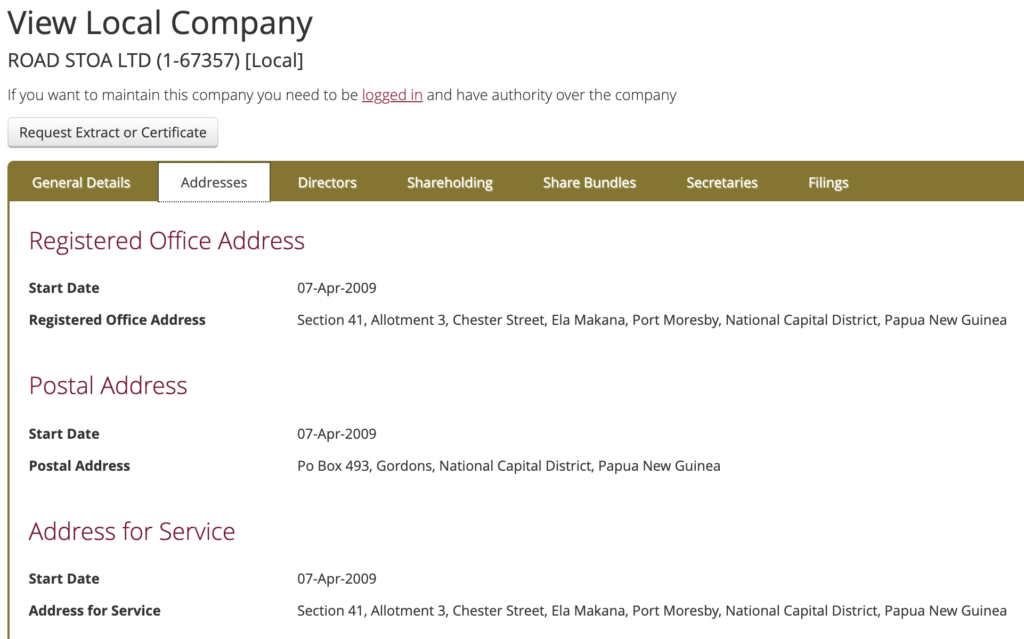 This corresponds with the registered office and postal address employed by the current MP for Gumine Open, Nick Kuman (although at the time of the criminal offence committed by the Works Secretary, Kuman was not a member of parliament).

You may as a consequence expect that Road Stoa Limited is owned by Nick Kuman. It is in fact owned by Ann Marins Kopuma, who employs the same registered address as Nick Kuman MP.

But this is not the only piece of evidence tying Nick Kuman and Anne Marins Kopuma. In 2018 a letter was submitted to the corporate registrar, it relates to a separate company NIAS Limited. 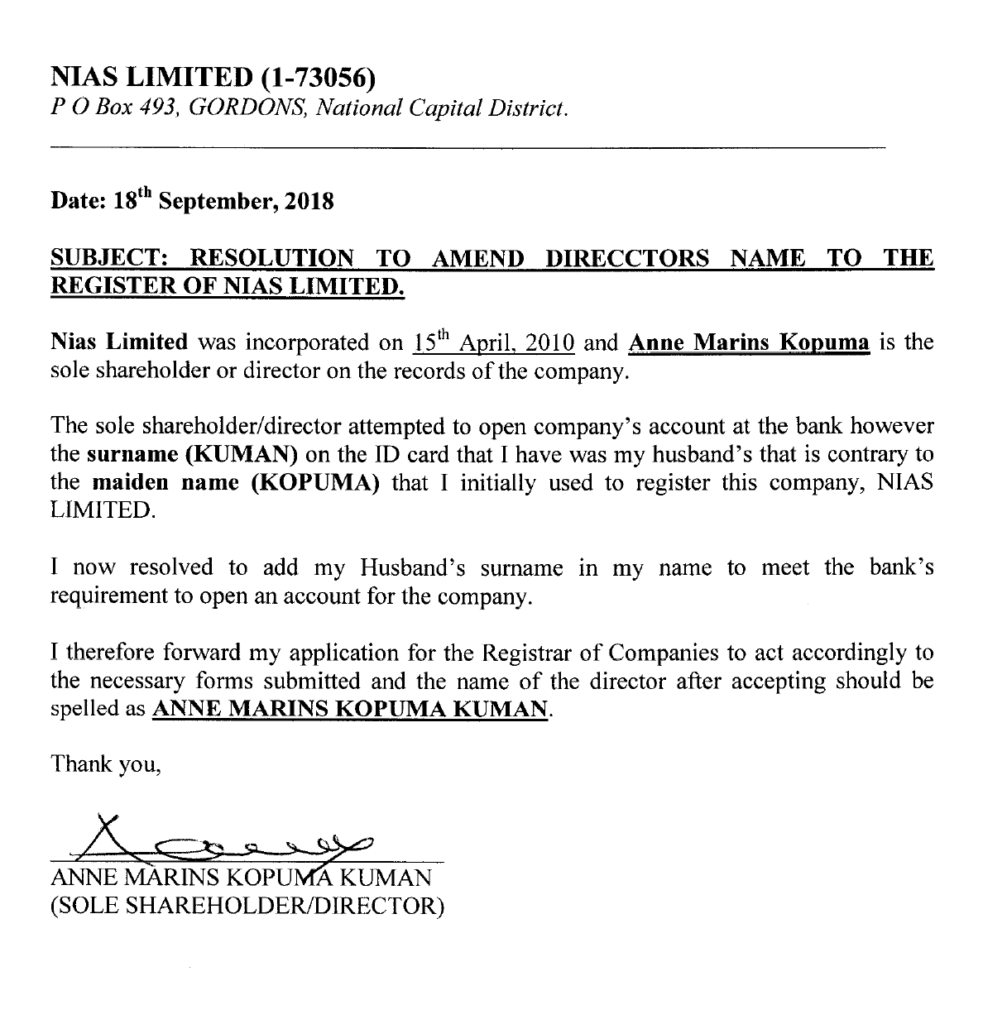 It would appear that the sole shareholder of Road Stoa Limited, a company which obtained K9.6 million from a criminal abuse of power by the Works Secretary (although it has not been established by the court that Road Stoa Limited was aware of this criminal act done for its benefit), not only shares an address with Nick Kuman MP, but a surname acquired through marriage.

PNGi wrote to Mr Kuman and asked whether he has a beneficial interest in Road Stoa Limited. He did not respond.

However, Nick Kuman MP is not the only politician tied to the abuse of power committed by the Works Secretary. Evidence presented to the national court contains allegations that a senior member of government in 2011 attempted to ratify and approve Luma’s criminal abuse of power. An audit conducted by the Works Department alleges that ‘the [then] Minister for Works, Peter O’Neill, had given handwritten approval for 20 contracts [issued to Road Stoa Limited] in a letter dated 12 July 2011’.

So we have here a case where the Works Secretary criminally abused his power to illegally award apparently inflated contracts to Road Stoa Limited without tender, a company whose sole shareholder shares a surname (through marriage) and address with current MP Nick Kuman, and the affair was allegedly signed off by then Works Minister, Peter O’Neill. O’Neill would later go on to appoint Kuman Minister for Education.

But this is not a case noteworthy purely because of the criminal behaviour exhibited by a senior civil servant. Also deserving of mention are Works Department officials who attempted to call out this behaviour at great personal and professional risk.

One example is Joseph Asinimbu who is Deputy Secretary of Corporate Services at the Department of Works. Justice Berrigan summarises his meritorious conduct:

He [Asinimbu] came to know about QPR [pothole patching material] when he received a memo from the accused [Works Secretary] asking him to endorse the payments.He told the accused that he would not do so because it was wrong to split the contracts. He also asked why he was using the certificates of inexpediency which were for national or health emergencies, or road closures.It was not necessary in this case to procure without going through the CSTB [Central Supply and Tender Board].Pothole patching is never an emergency and the certificates should not have been used. To his knowledge the Department of Works had no prior relationship with Road Stoa.He was aware of them but regarded them as too expensive … he wrote to the accused on 5 May 2011 objecting to the procurement, which he copied to the Prime Minister and Minister for Works: Exhibit I.

Others knew the transactions were wrong, but claim if they did not comply with processing the invoices they risked losing their job. Evoa Miao was the financial delegate in the Works Department’s accounts department. He claims the the Works Secretary ‘told him to process it and if he did not he would be “kicked off because he’s my boss”’.

Iru Goka, a certifying officer in the Works Department claims she was ordered by the late Margaret Malala, the then acting Finance Secretary, to process the claims despite the clear lack of legal compliance.  According to Justice Berrigan ‘under cross-examination she agreed that she did not stand up to her oath as a public servant but processed the claims in fear for her job’.

It would appear that while one chapter of this scandal has been closed by the National Court, other chapters focusing on the tied actors, Nick Kuman, and Peter O’Neill are still to be written. While it cannot be inferred either party was a knowing participant in a crime, there is enough significant evidence to support a thorough investigation into this scandal.