Jimmy Maladina needs no introduction. He is one of the nation’s most controversial figures.

He was alleged by a Commission of Inquiry to be one of the masterminds behind the National Provident Fund fraud and Waigani land scandal. According to a pre-sentence report Maladina freely admitted the offence and expressed remorse. 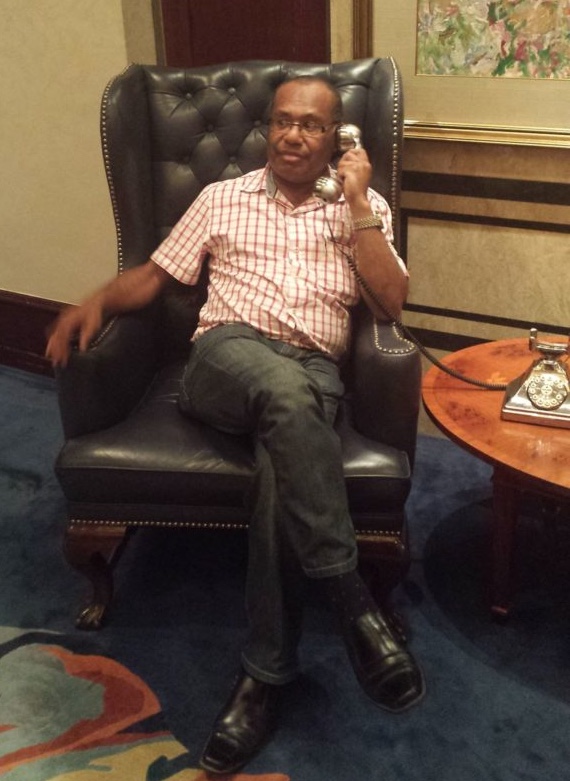 Maladina nonetheless later appealed his conviction and was successful. One of his alleged co-conspirators was not so lucky and served a substantial custodial sentences.

Since 2017 PNGi has covered numerous transactions involving Jimmy Maladina. These include a suspicious land deal, and curious electoral practices.

However, none is more curious than today’s PNGi Investigates story. It ranks as one of the strongest candidates ever published on PNGi for a thorough fraud squad probe.

The details became public whilst global attention was transfixed by COVID-19. On 24 April 2020, in a Waigani court house Justice Anis delivered a decision on an application for default judgement. The case involves plaintiff Flavalea Limited, a company 100% owned by Jimmy Maladina, and the defendant China Railway Construction Engineering (PNG) Limited. 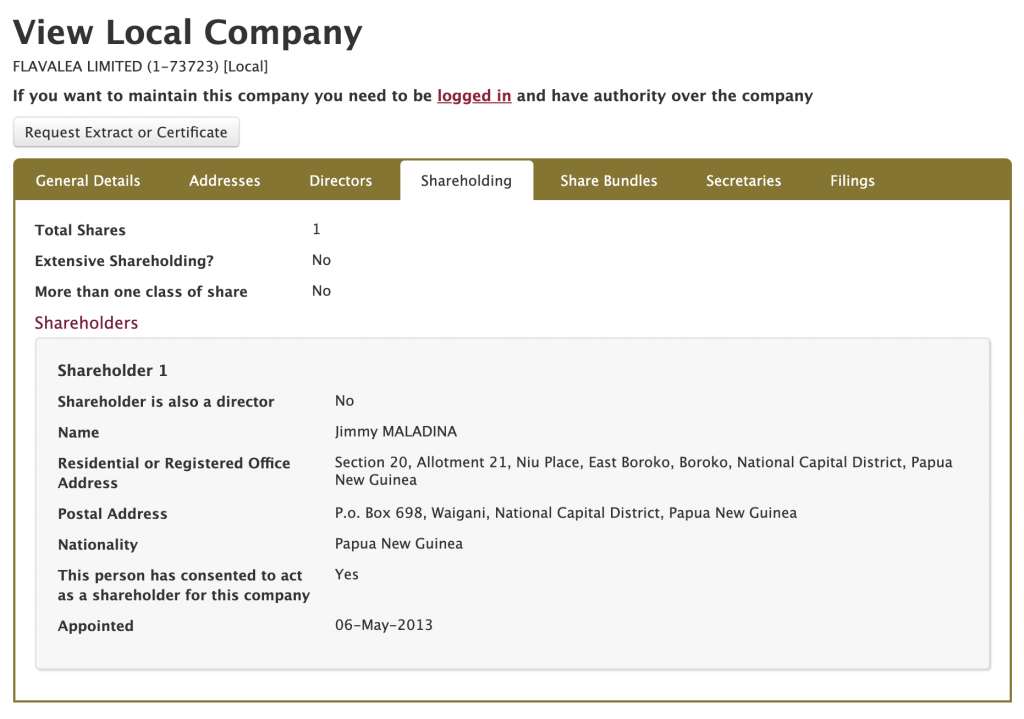 The Court was asked to enforce a contract between Flavalea Limited and China Railway.

According to Maladina’s company, Flavalea Limited, a referral contract was signed with China Railway on 12 July 2015. This took place two months after Jimmy Maladina was found guilty for conspiracy to defraud, and misappropriation, by Deputy Chief Justice Salika. Maladina immediately initiated a Supreme Court appeal against his conviction.

China Railway’s in-house legal officer, George Atoa, presented evidence confirming a referral contract had been entered into.  However, according to China Railway’s evidence it was signed under conditions of duress. Mr Atoa claims that China Railway’s then Managing Directer Mr Sheng Liu

admitted to signing the Referral Agreement with the Plaintiff Company’s Managing Director and sole shareholder, Mr. Jimmy Maladina, but says that at that material time, he was under duress to sign the agreement as he was advised by the Plaintiff company’s director Mr. Jimmy Maladina that if he (Sheng Liu) refuse to agree to and sign the referral agreement then the Plaintiff’s director will use his networks within the tender bid screening committee to remove the Defendant company at the early stage of the bidding process.

This is a stunning allegation. In effect Mr Atoa’s evidence suggests Jimmy Maladina ran an extortion racket, using his influence over public procurement to obtain a 10% cut from the company.

One job Maladina’s company allegedly ‘secured’ for China Railway was the public construction contract for the Waigani Court Complex.

The contract is worth nearly half a billion Kina (K427,174,202.24). It was signed between the National Judiciary Service and China Railway on 29 July 2016. This was several months after the Supreme Court quashed Maladina’s convictions for the NPF fraud on 20 April 2016.

This raises serious governance questions. If Jimmy Maladina, through Falavalea Limited, signed a referral contract with China Railway that would have him collect a 10% cut from every successful bid which Maladina helped China Railway to secure, we have a situation where a man described as having a close personal relationship with the Prime Minister, was getting a cut of major contracts awarded to China Railway by the state.

Heightening concerns is the nature of the relationship between then Prime Minister, Peter O’Neill, and Jimmy Maladina. Jimmy’s brother Harvey Maladina was recorded on camera stating that his brother Jimmy is ‘Chief Adviser’ to Prime Minister O’Neill. Harvey claims: ‘He advises Peter, he talks to the Prime Minister every five minutes … You want a license … he gets it’.

Based on the preliminary evidence submitted to the court thus far, China Railway accepts the existence of this contract but contends it was the unwilling victim of an extortion racket administered by Maladina.

This may be the case. However, it is  worth noting that China Railway is a company on Transparency International’s radar, after journalist Malum Nalu reported: ‘A Chinese company, China Railway Construction Engineering (CRCE) PNG, was awarded a contract worth more than K263 million to build the 2015 Pacific Games Village at University of PNG, despite the job being valued at only K190m. Documents provided to The National show that CRCE was not in the top three of the 10 companies that bid for the contract, however, was approved ahead of the rest at an additional cost of more than K73 million to Papua New Guinea’.

Nor is the Waigani Court Complex the only big-ticket tender won by China Railway during this approximate period during which it allegedly had a referral contract with Maladina.

So not only do we have a referral contract signed with an individual described as a politically exposed person, the other contracting party, China Railway, is accused of previously winning inflated contracts under suspicious circumstances. It appears there is red flag after red flag.

But there are more.

The National Court accepted China Railway’s evidence that they had no employee by the name of Peter Hawas. Justice Anis also noted there was ‘striking similarities’ between the hand writing of Flavalea Limited’s attorney, Kuira Lawyers, in the process service form, and the signature of Peter Hawas. In others words the learned judge believes the signature may be a forgery.

Judge Anis concluded, ‘I therefore reject the affidavit of service as a credible evidence, that is, the affidavit of Carl A Kuira filed on 27 February 2019’. The Court, in effect, is suggesting Flavalea Limited’s lawyers applied for default judgement, without giving China Railway the opportunity to file a defence.

As a result, the Court has ordered Flavalea Limited to serve a sealed copy of the writ of summons and statement of claim within seven days, so China Railway can mount a proper defence.

The upshot is Flavalea Ltd v China Railway Construction Engineering contains some of the most potentially explosive allegations in modern political history. A politically exposed individual, allegedly a close confidant of the then Prime Minister Peter O’Neill, is alleged to have coerced a multinational into giving him a 10% cut of major public contracts. The same multinational company is reported to have previously won inflated contracts. In this case the award was for K427 million to build the Waigani Court Complex. The massive construction contract was signed shortly after Maladina successfully appealed his criminal conviction, a Supreme Court decision that surprised many.

Ultimately this referral contract, whether freely entered into by China Railway or not, likely increased the construction cost paid by the PNG public.

Its existence also prompts the question, how many of such referral agreements were signed with Maladina, or Maladina owned companies?

The company had been blacklisted by the World Bank for ‘a repeated pattern of misconduct by submitting fraudulent documentation’.

It cannot be inferred that Maladina also had a referral contract with China Jiangsu, which awarded Flavalea Limited 10% of every contract Maladina secured for the company. The China Railway case, however, certainly begs for this question to be further investigated.

If there were a wide range of similar styled ‘referral contracts’ with major companies in receipt of large public procurement contracts, the 10% fees could add up to a considerable amount. All of which would be arriving in a bank account belonging to a man described by his brother as the Prime Minister’s Chief Adviser.

PNGi has reported on many arrangements in need of a serious, systematic investigations. This rates as arguably as one of the most significant in urgent need of  thorough inquiry by the Police Fraud and Anti-Corruption Directorate. It is also a matter that would benefit from a PNG Law Society probe into the concerns raised by Judge Anis over the conduct of Kuira Lawyers.