A private law firm owned by Ralph Saulep is being paid K14.5 million for representing the Morobe provincial government in a successful legal challenge. The case involved an MOU signed between the State and the owners of the Wafi-Golpu mine.

The K14.5 million fee includes K4.5 million for Saulep’s professional legal services, K155,000 for out of pocket expenses and a massive ‘win bonus’ of K8.5 million. This bonus was premised on Saulep Lawyers recovering for the provincial government a K1 billion asset. Spoiler alert, they recovered nothing of the sort, putting into question the foundation for this lavish amount.

The K14.5 million bill also includes K350,000 for consultancy services. According to documentation seen by PNGi this item stemmed from an agreement struck with the Morobe Provincial Government in 2018. The Morobe Provincial Government contracted Ralph Saulep and a business associate, Elizabeth Bradshaw, as ‘Special Advisors and Consultants’ for a five year period at a rate of K25,000 per month each.

If the name Elizabeth Bradshaw sounds familiar, it may be because she is one of the directors and shareholders in Niugini Biomed, a company that recently attracted scandal when a leaked NEC paper revealed it was lobbying government with Prime Minister Marape’s support for K10.2 million, to start manufacturing a ‘cure’ for COVID-19.

The K14.5 million payment to Saulep Lawyers is to be split between the national government, who will pay K10 million, and the Morobe provincial government who are paying the balance of K4.5 million. 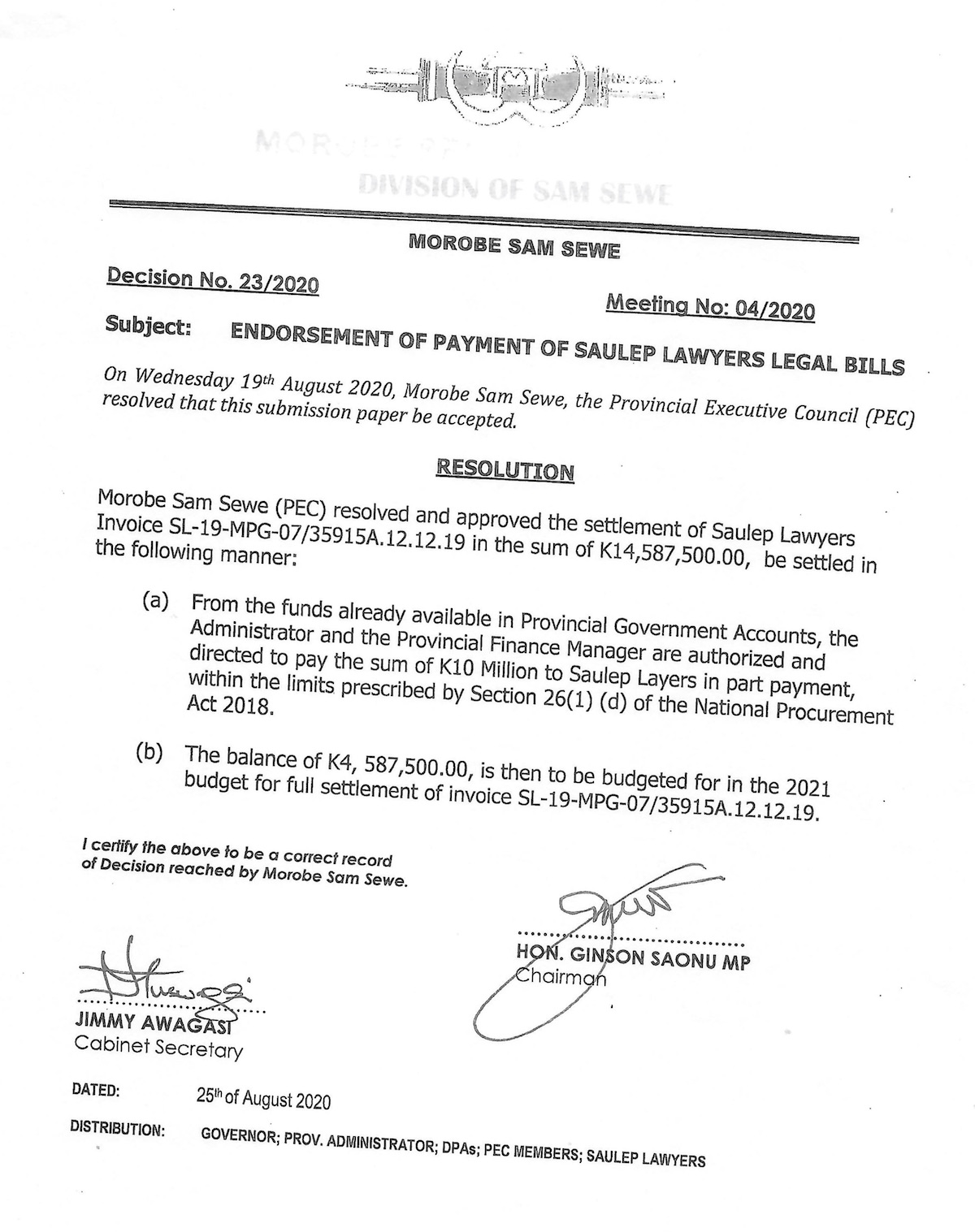 All of these monies are public funds, taken from hard-working tax payers and the payments will deplete government funding available for essential services like schools and health care. It is right therefore that the payments are closely examined to ensure they are legitimate.

Two giant mining companies, Newcrest and Harmony Gold plan to build a new underground gold and copper mine at Wafi-Golpu, some 65km inland from Lae in Morobe Province. 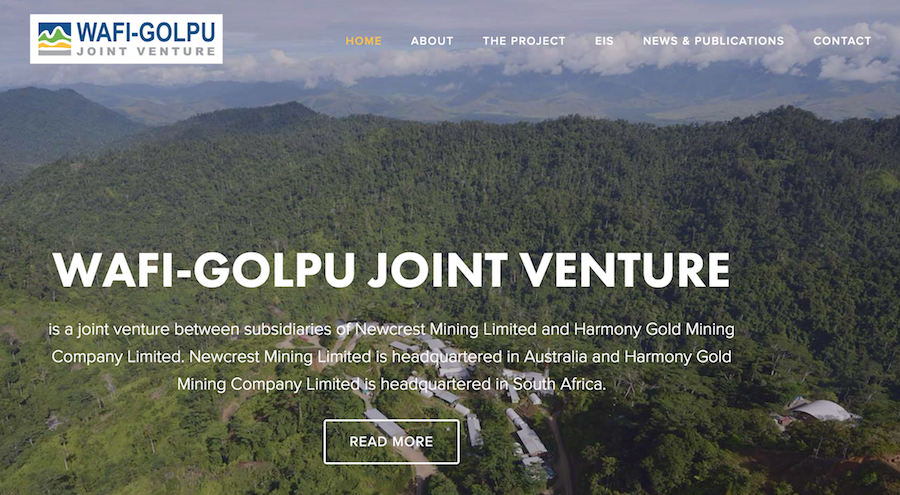 Both the PNG government and the Morobe provincial government have previously expressed an interest in acquiring an equity stake in the mine. This is allowed under the Mining Act.

However, in December 2018 the PNG government attempted to convince the Morobe governor to sign on to a Memorandum of Understanding with the mining companies. The MOU provided the State with a 20% equity interest, with nothing allocated to the Morobe government.

Morobe’s governor, Ginson Saonu, refused to sign, asking for time to take further legal advice. However, a few days later, the national government signed the MOU anyway. This effectively deprived the Morobe government of the opportunity to acquire any equity stake.

Despite requests from the Morobe government, both the State and the mining companies refused to withdraw or amend their MOU. A legal challenge was therefore filed in January 2019, seeking a judicial review of the legality of the MOU.

The legal firm engaged by the Provincial government to pursue its legal claim was Ralph Saulep lawyers.

Just as the judicial review claim came to court, in February 2020, the State decided it would not honour the MOU, and withdrew from it. This effectively ended the court challenge as the MOU was now defunct.

As a result, on February 11, the court proceedings were dismissed. 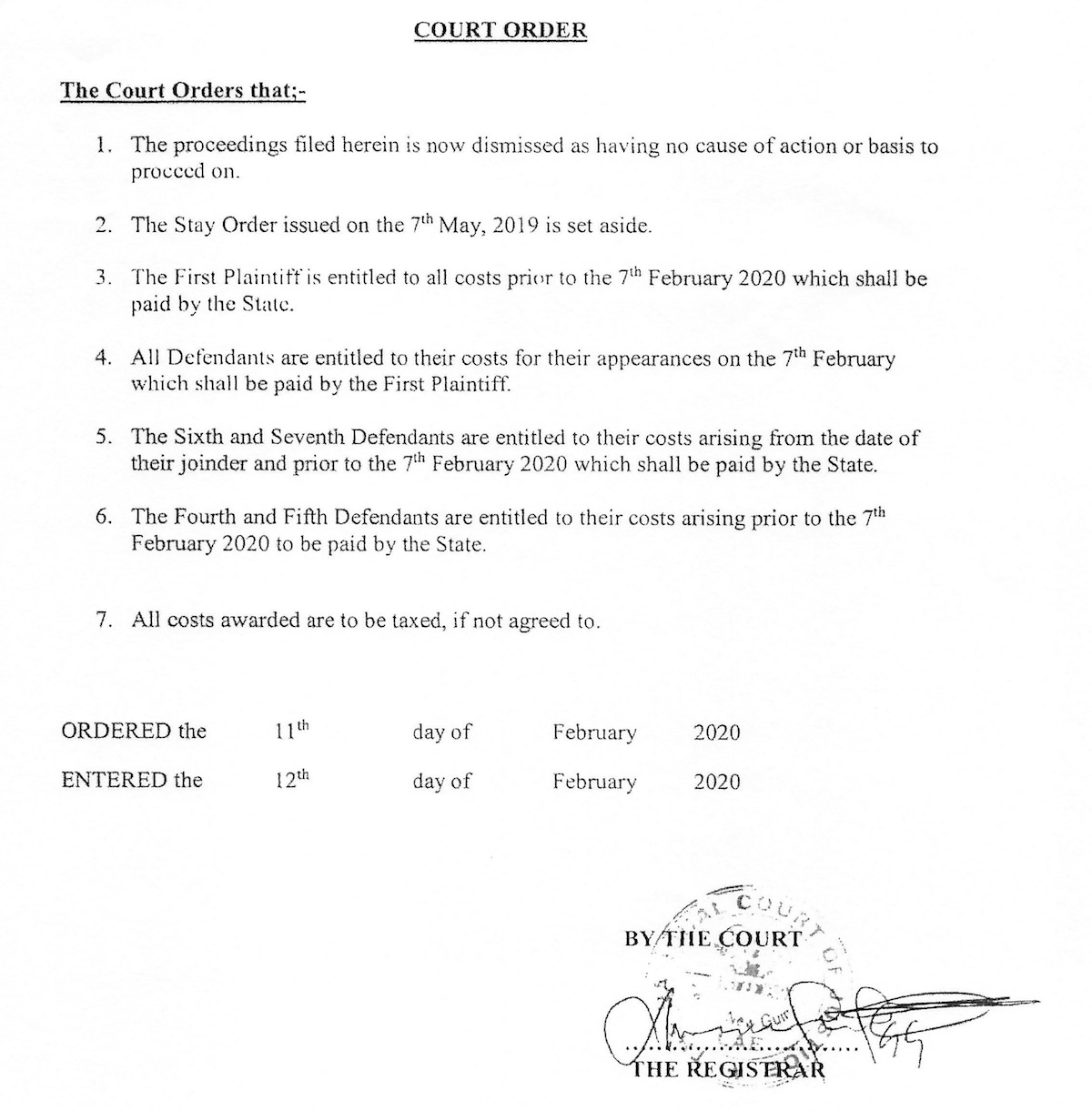 On February 11 the judicial review proceedings were dismissed and the State ordered to pay the legal costs of the Governor, as first plaintiff, up to the date of the hearing

No new MOU has yet been negotiated and signed. It is not known whether any new MOU will allow the Morobe government to purchase a 10% equity stake or whether the Morobeans will be able to raise the necessary capital to finance it.

On 30 March 2020, Saulep Lawyers presented their tax invoice to the Morobe Provincial Administrator for legal services in relation to the judicial review proceedings.

The invoice was broken down into six parts.

One: Legal services from October to December 2018. In this period there were meetings with the Governor, Provincial Administrator and his four deputies, MOU review meetings, team meetings, PEC submissions, preparations for the APEC summit, drafting of Parliamentary questions and preparation for and attending the PNG Mining Conference in Sydney from 4-6 December.

Comment: For accountability and transparency it is usual for a legal bill to be broken down by the number of hours and the billing rate. A lump sum figure, is not good practice, a lump sum figure that is rounded to the nearest hundred thousand, raises questions about its accuracy.

Two: Legal services from January to June 2019. Briefing the Provincial government on the MOU and arranging a briefing to MPs. Drafting and serving letters of demand on the State and mining company, serving a letter of demand and drafting the judicial review proceedings and affidavits in support, filing and serving the judicial proceedings. Making the application for judicial review and preparing additional affidavits. Serving all parties with leave. Preparing for trial and attending directions hearings. Meeting with the Prime Minister.

Comment: Again, there is no breakdown of the actual hours worked and billing rate. A rounded figure of K1 million raises questions about how it has been calculated and its accuracy.

Three: ‘Negotiations for out-of-court settlement (End June to November 2019)’. This period included various meetings with the Prime Minister and the litigating parties and the drafting of a possible Deed of Settlement.

Comment: Again, there is no breakdown of the actual hours worked and billing rate. There is nothing in the description of the meetings attended or other work done to show the hours worked in this period justify a fee that is 50% greater than the fee for the previous six-months work.

Four: ‘Preparations for Trial (inclusive of all preparations – January -December 2019)’

Comment: The K1 million fee for January-June already included drafting and serving letters of demand, court proceedings and affidavits in support, and ‘all matter necessary and incidental to the administration of the matter in preparation for Trial’. A prudent client might ask whether a further K1.5 million for ‘preparations for trial inclusive of all preparations January – December’ could be excessive or even amount to double-dipping.

Comment: This is the most remarkable part of the whole invoice and raises a host of questions that we will address below.

Saulep Lawyers is a registered business name owned by Ralph Saulep. The full invoice submitted by the firm to the Morobe Provincial government can be downloaded below.

Yet his professional fees for legal representation through the MOU negotiation process and subsequent judicial review amount to just K4.5 million, less than one third of the total.

The bulk of the invoice, K8.5 million, is for the ‘percentage success fee’.

This fee effectively triples Ralph Saulep’s earnings, but what was it for and how was it calculated?

According to the invoice the ‘success fee’ is for the ‘10% equity option lost and recovered’.

This wording implies that as a result of the judicial review application the Morobe government has recovered a 10% equity option in the Wafi Gulpu mine.

This is, however, a misrepresentation of what has happened. On the eve of the judicial review hearing the State decided to dishonour and withdraw from the MOU it had signed with the mining companies. This means there is no MOU currently in existence.

All that has been recovered through the legal action and the withdrawal of the previous MOU is the opportunity for the Provincial government to again present its case for a 10% equity option for Morobe to be included in the new MOU when it is agreed.

It is not guaranteed that either the State or the mining companies will agree to a 10% equity option for Morobe being included in the new MOU, and, even if they do it will then be for the Morobe government to somehow raise the capital to pay for that equity.

It is estimated the cost of building the mine will be around US$2.8 billion. A 10% equity stake could therefore cost the people of Morobe around $280 million or K980 million. That is a substantial sum of money for a Provincial government to borrow.

It therefore seems a misrepresentation for Ralph Saulep Lawyer’s invoice to claim a ‘success fee’ on the basis the 10% equity option has been recovered; it has not been recovered.

The way the fee has been calculated is also open to serious question.

There is no K1 billion that has been saved and recovered from the MOU. Currently, there is no MOU. If, in the future an MOU is negotiated with a 10% equity stake for the Morobe government, that stake will cost the people of Morobe around K1 billion.

The way the invoice is worded could lead a lay person to believe that the Morobe government has miraculously recovered the sum of K1 billion. In such a scenario, someone may argue it is entirely reasonable for the good knight who has delivered this bounty to be rewarded with a small portion, maybe even 0.85%. But this is just a fairy tale, the Morobe government has not recovered any money at all and there is no pot of gold to be distributed.

This all raises an important question about what the members of the PEC were told before they approved the invoice payment and whether they might have been misled?

The eagle-eyed reader will have noticed one further inclusion in Ralph Saulep’s legal bill, K350,000 for ‘Consultation Fees’.

Saulep is already being paid K4.5 million for professional legal services, a win bonus of K8.5 million and is recovering K155,000 in out of pocket expenses, why is he claiming an additional K350,000 for consultation fees?

The answer seems to lie in an agreement made in 2018 whereby the Morobe Provincial government would engage Ralph Saulep and Elizabeth Bradshaw as ‘Special Advisors and Consultants’ for a five year period and pay them each a monthly fee of K25,000. 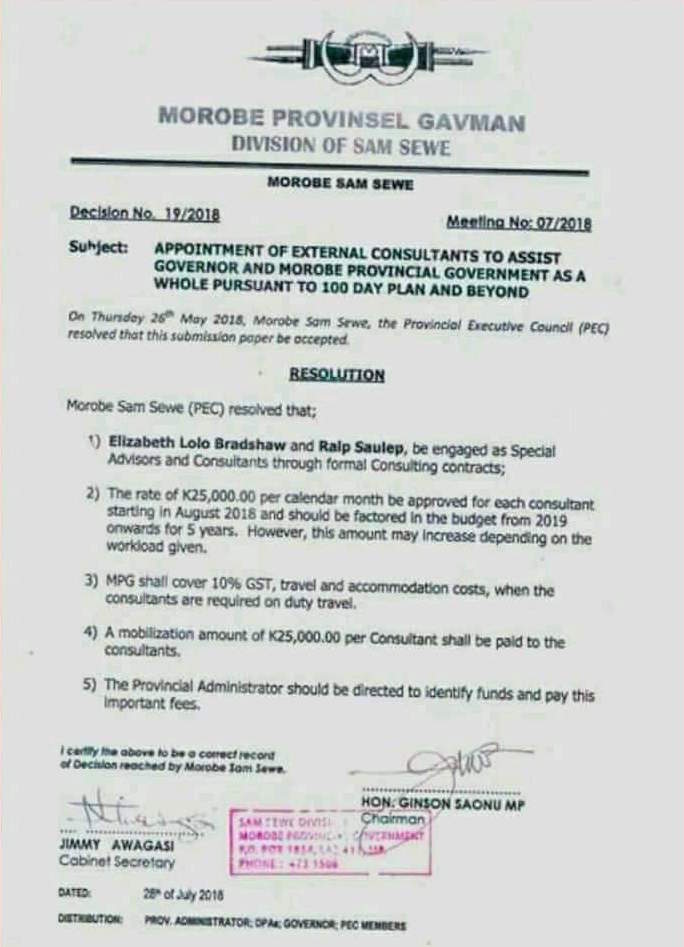 In 2018 the Morobe Provincial government approved the engagement of Elizabeth Bradshaw and Ralp [sic] Saulep as consultants for a five-year period.

The total amount each consultant will be paid over the five-years is K1.5 million, although the final total may be higher as ‘the amount may increase depending on the workload given’.

The K350,000 in consultation fees claimed by Ralph Saulep in his March 2020 invoice would represent 14 months work under the consultancy agreement. This roughly tallies with the October 2018 to January 2020 period covered by other parts of the same invoice.

Ralph Saulep must have been a busy man to be able to do K4.5 million worth of legal work and at the same time fulfil his consultancy obligations!

It is not known what sort of tendering process was involved in awarding the K3 million consultancy contract to Saulep and Elizabeth Bradshaw nor what are the terms and conditions of their contracts.