The Special Police Forensic Criminal Investigation Team announced earlier this year it had uncovered a staggering K268 million theft. According to a July media release issued by the special RPNGC unit, the money has been taken from the Western Province People’s Dividends Community Mine Continuation Agreement Trust Fund.

The alleged offenders include a number of managers, directors and lawyers working on behalf of the Ok Tedi Fly River Development Foundation Limited. This includes the controversial Australian lawyer Greg Sheppard, who is currently being prosecuted on a number charges. All of the accused maintain their innocence.

The Trust Fund at the centre of this criminal investigation was  set up to hold 5% of the dividends paid out by the Ok Tedi Mining project, through its account at ANZ bank.

Police Commissioner David Manning, who headed the special investigation, asserts that the Trust Fund was established through a Trust Instrument signed off by John Hickey MP. Under the Trust instrument the funds held with ANZ are to be applied for the specific purpose of  delivering authorised projects for communities covered by the Community Mine Continuation Agreement.

To quote Manning, ‘the Trust Funds rightfully belong to 148 thousand plus people residing in 158 villages located in the CMCA Communities along the Fly River Corridor in Western Province’.

The Police Commissioner in the July media release goes on to allege that K268 Million was fraudulently withdrawn from the trust account. Included in this amount is K52 million transferred to Young & Williams Lawyers. Police have subsequently charged Young & Williams principal Gregory James Sheppard with 2 counts of money laundering, 2 counts of misappropriation, 2 counts of conspiracy and 2 other charges of false pretence.

In today’s investigation we reveal the ANZ bank statement for the account at the epicentre of these charges levelled against the controversial Australian lawyer. Regardless of the outcomes of the prosecution effort, these bank statements place a spotlight on the banks involved in facilitating these large, arguably high risk monetary transactions.

This comes against a regulatory backdrop marked by a raft of anti-money laundering reforms. These reforms place a legal responsibility on banks in PNG to monitor client accounts and identify suspicious transactions. This obligation includes conducting thorough risk assessments of customers, and then ensuring the appropriate level of due diligence is conducted in response to the degree of risk. Where a customer is high risk, the regulations state that the account must be subject to enhanced due diligence.

Failure to conduct appropriate levels of due diligence is an offence under the Anti-Money Laundering Act punishable by fine and/or custodial sentence. Additionally, handling the proceeds of crime is also defined as a crime under the 2015 reforms to the Criminal Code.

What this means is, regardless of the outcome of the current prosecutions against those accused of stealing Trust Fund monies, if any bank involved in managing these transactions failed to conduct appropriate levels of due diligence on the accounts concerned they face potential prosecution under the Anti-Money Laundering Act. If the Trust Fund related prosecutions are successful, then the ante is raised. In this scenario the banks concerned could potentially face prosecution under the Criminal Code for handling the proceeds of crime, if they have handled property in circumstances where it is reasonable to suspect that the property is in fact criminal property. 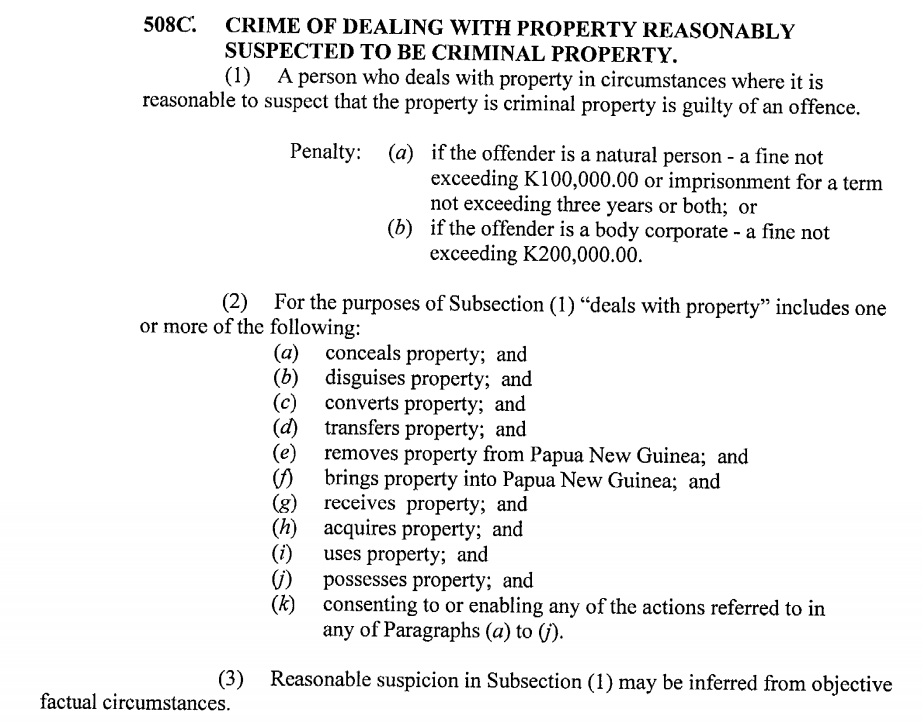 According to Police Commissioner Manning,  K52 million was transferred from the Trust Fund account held at ANZ to Trust Accounts held by Young & Williams Lawyers at Westpac. The Police Commissioner’s media release notes that the ANZ Payment Instruction Application Form declare that the purpose of the payments to Young & Williams were ‘legal fees’ .

This amount stated in the media release corresponds to transactions disclosed in a copy of the Trust Fund’s ANZ bank statement obtained by PNGi. 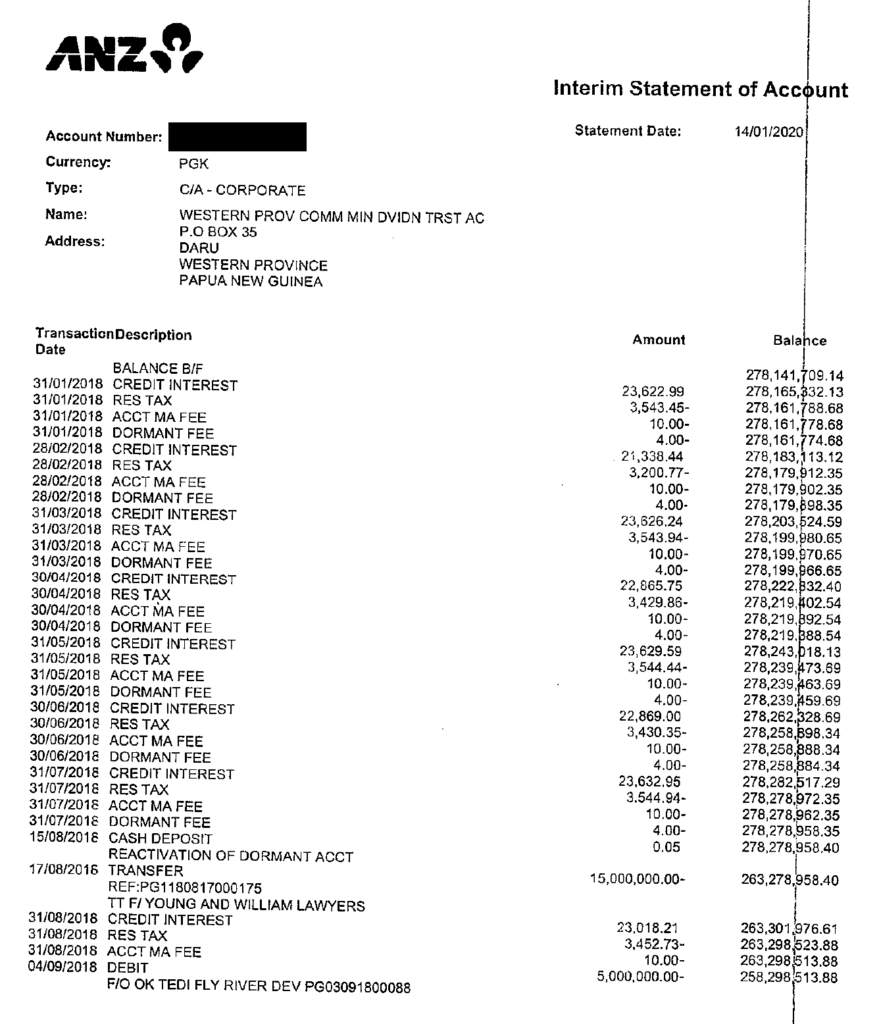 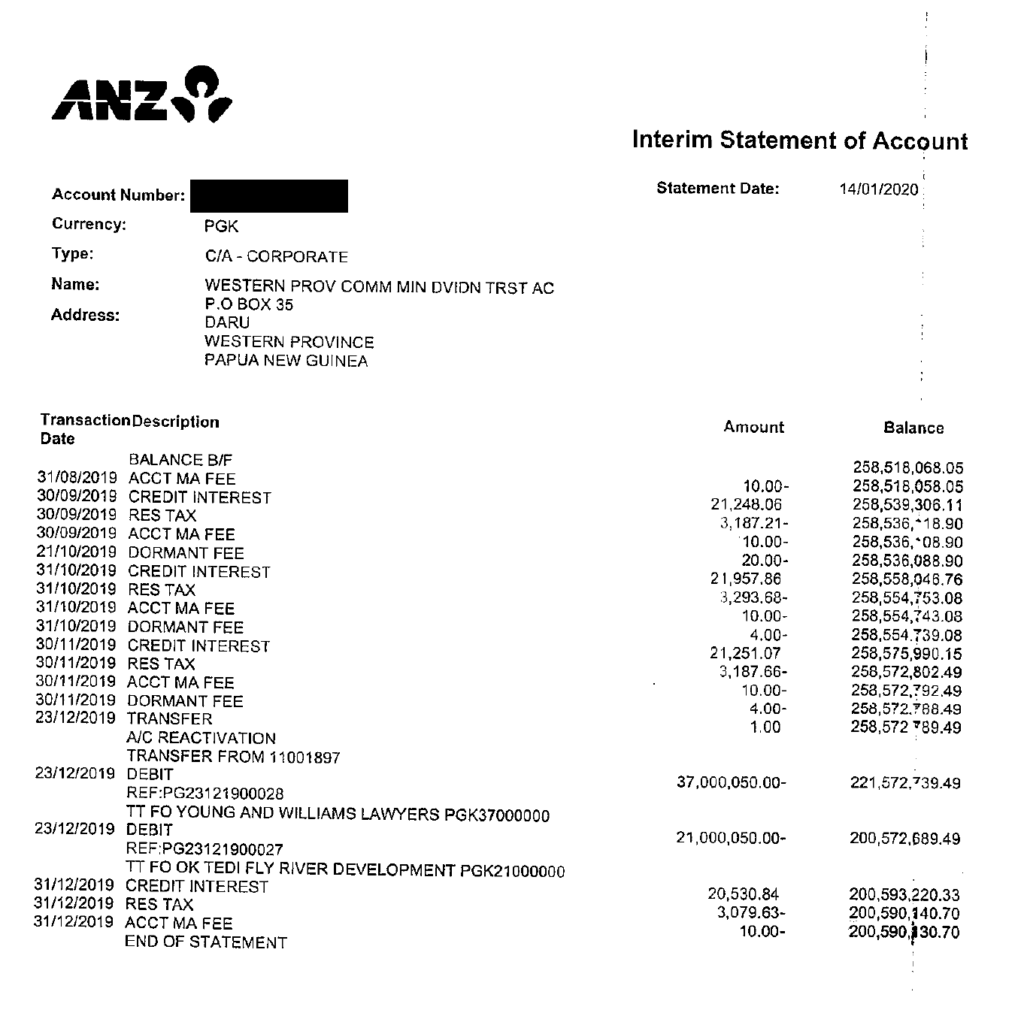 This prompts the question – what level of due diligence should ANZ and Westpac have exercised in relation to these transactions?

Looking at the facts, including the transactions and the parties involved in these transactions, there are grounds for arguing both transfers ought to have been closely scrutinised by the banks involved.

First, the transferor is a Trust Fund set up to benefit mine impacted communities in Western Province. There is an established record of Trust Funds being abused systematically in PNG. Therefore, it is arguable that this particular account type, given the risks involved, ought to have been one earmarked for enhanced due diligence.

Second, large sums of money were transferred to a Young & Williams trust account held at Westpac (K52 million). The law firm’s principal includes, Gregory Shepphard. Shepphard has not been  found guilty of a criminal offence in PNG or elsewhere. However,  there is information available on the public record that arguably warrants an elevated level of due diligence by banking institutions.

First, Sheppard was recorded by Global Witness giving advice to an undercover journalist on how to effectively conceal payments to a politically exposed person, by moving the payments offshore, making them in ‘dribs and drabs’. Sheppard claims he was merely speaking hypothetically.

Second, in a Singapore court judgement Sheppard has been tied to the Inclusive Education for National Development for Community Education Trust, whose funds were misused to transfer bribes to Sir Michael Somare and his son. While Sheppard did not face any charges or allegations of impropriety regarding this incident, he was responsible for administering the Trust’s funds, and advising it on legal matters. His close association with a trust fund abused by politically exposed persons, from a risk assessment perspective,  provide additional grounds for exercising heightened due diligence on all transactions connected to Sheppard, especially where a trust fund is involved.

If we turn to the transaction themselves, there are further grounds still for exercising rigorous due diligence. First, there is the scale of the sums transferred, in total K52 million for legal services. Even by corporate litigation standards this would be considered a sizeable amount. The transactions are also for rounded amounts, K37 million and K12 million. It is unusual for goods and services, such as billable legal hours, to consistently be for well rounded amounts of this nature. Third, it has been alleged that the Trust Instrument  state that the funds could only be used for authorised projects for the benefit of mine impacted communities. At face level, paying large legal fees do not appear to be related to the trust’s purpose. And banks are under a legal responsibility to identify and investigate any risky transaction that does not appear consistent with an account’s ordinary activity or purpose.

So what we would expect to see at ANZ bank and Westpac are detailed files, which demonstrate both banking institutions conducted appropriate levels of due diligence. For instance, we should expect to see documents which show the banks had inspected the trust instrument, had scrutinised the transfers, and were satisfied that the payments were in keeping with the trust’s purpose following rigorous verification, and had also been given the appropriate government approvals.

ANZ and Westpac did not respond to PNGi’s request for comment on this matter.

This prosecution, whatever the outcome, is a reminder of the critical need for a strong and proactive financial regulator.

While the Central Bank has recently attempted to put the brakes on the Financial Analysis and Supervision Unit’s AML investigations, cases like this one reveal that AML is not only about ensuring the integrity of the national financial system, it is also a critical safeguard for ensuring that banks are closely monitoring risky transactions involving public and community money.

Banks are one of the few institutions in a position to blow the whistle on suspicious transactions. However, until such time that they face the serious risk of prosecution in PNG, it is hard to see what would motivate banks to exercise this duty with the standard needed to confront fraud and corruption enabled through the nation’s financial veins.

It is critical therefore that transactions such as those revealed in this Special Police Forensic Criminal Investigation Team probe are thoroughly scrutinised to ensure the banks concerned complied with their regulatory obligation.