Was Peter Graham right to slam PM Marape over Kumul Minerals Board Shake-Up?

Last Friday a resignation letter attributed to the head of Kumul Minerals Holdings, Peter Graham, began circulating on social media. In the letter Graham informs Prime Minister Marape he is standing down as Chairman and Managing Director at Kumul Minerals, a state entity that manages the government’s mining interests.

In the leaked resignation letter Graham observes that this decision was prompted by his disappointment that ‘the process of appointing new directors to Kumul Minerals has been handled by your staff in a manner that has not complied with the Kumul Minerals Authorization Act in terms of both the appointment process and the qualification of directors’. 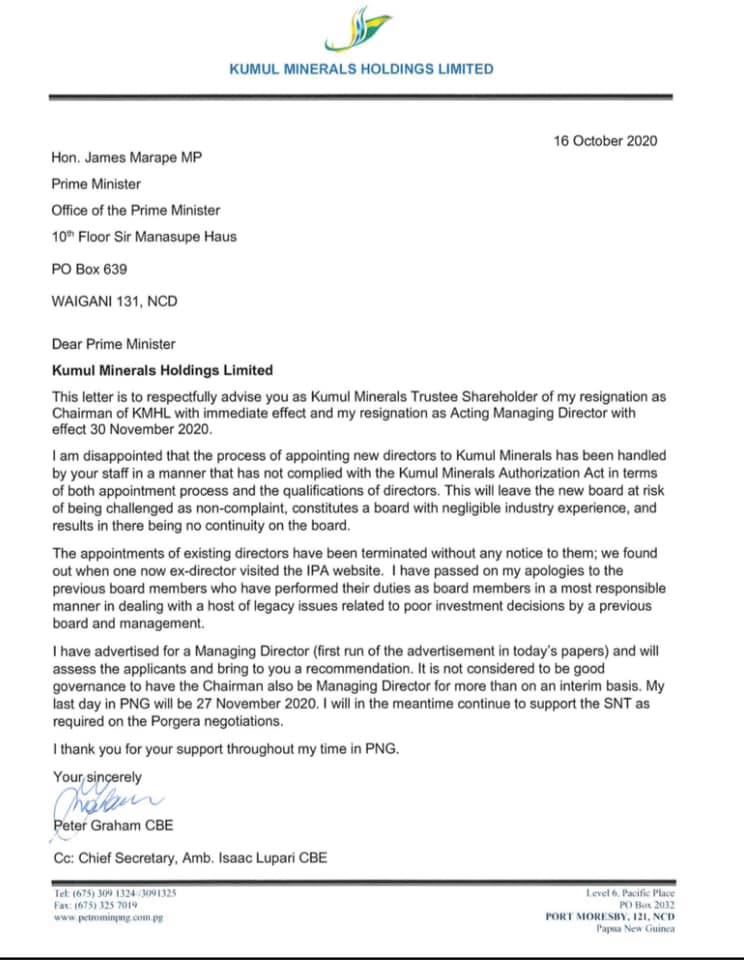 It appears from IPA filings, the corporate registrar held similar concerns over the legality of the PM’s move.

A hand written note on a letter originally submitted to the corporate registrar by Marape’s Acting Chief of Staff states ‘wrong meeting was held to appt/resign directors’. A further note at the bottom of the letter, however, suggests this decision was at least in accordance with the companies law. 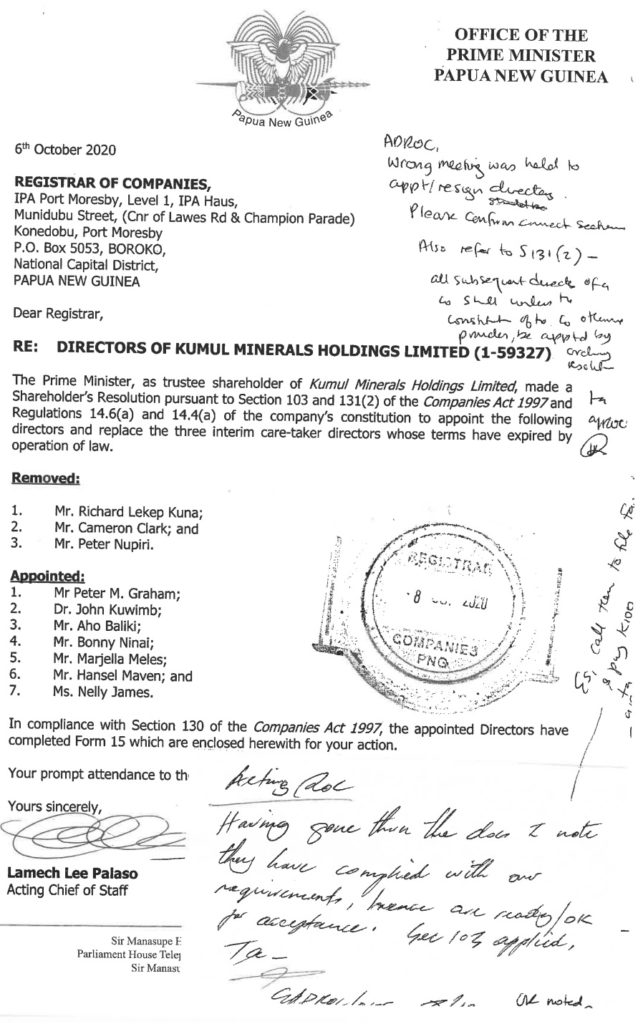 The resolution cited in this letter to the Corporate Registrar was made by Prime Minister Marape on 24 of September 2020. In it he dismisses three existing Kumul Minerals’ directors, replacing them with six new appointees. The resolution is set out below. 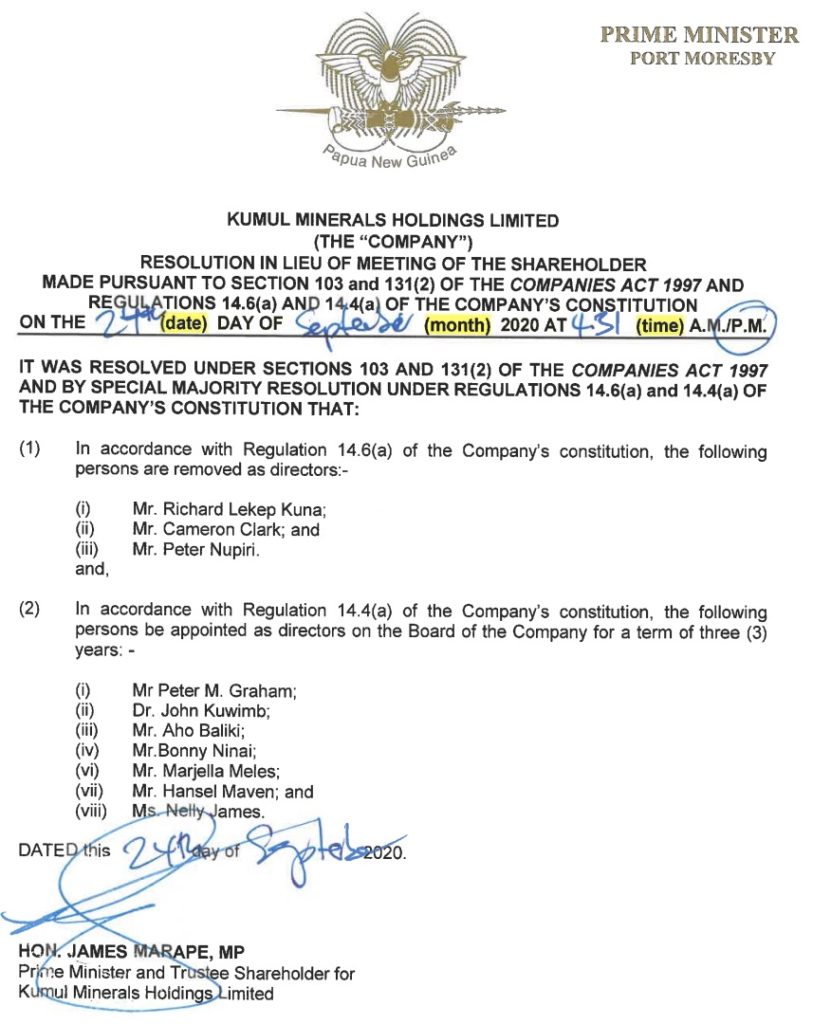 The new directors appointed through this resolution include Aho Nollen Baliki, Bonny Ninai, Hansel Maven, Mako John Kuwimb, Marjella Meles and Nelly James. Given the abrupt nature with which they were appointed, which appears to have taken place without adequate consultation, does this list raise any red flags?

Aho Nollen Baliki lists his residence as Harbourview penthouse apartments in Paga Hill. Apartments in the complex currently rent at K5,500 per week.

A news search reveals a 2011 report on Aho Nollen Baliki featured in The National. It states:

A senior Bank South Pacific manager charged with conspiring to defraud the National Museum and Art Gallery of more than K100,000 appeared in the Waigani District Court yesterday. Aho Nollen Baliki from Okiufa, Eastern Highlands, is the general manager for paramount banking with BSP based at downtown Port Moresby. It is alleged that between June 10 and July 15, Baliki conspired with some museum board of trustee members to fraudulently debit monies from the museum account to accounts of different private organisation.

A similar report appeared in the Post-Courier stating:

A subsequent article published in The National adds:

Police Commissioner Tony Wagambie has disbanded the National Capital District command centre and its fraud squad without explaining to his officers the reason … Reliable sources, speaking on condition of anonymity, said last night the decision was suspicious because it came at a time when high-profile fraud cases were being handled by the NCD fraud squad under the command of Seekiot and Tondop. It included the K50 million Nasfund cases, Pacific Balance funds fraud case, and the K100,000 National Museum and Art Gallery case in which senior banker Aho Nollen Baliki appeared in court this week to answer charges of conspiring to defraud.

No record could be found on PACLII for this case. It is impossible therefore to verify the final outcome of the case, or the validity of the allegations.

The next new appointee to Kumul Minerals’ Board is Marjella Meles. Meles lives in more modest accommodation in Kingston, an outer suburb in Brisbane. There is little public information available on Meles. His LinkedIn Professional profile has recently been deleted. 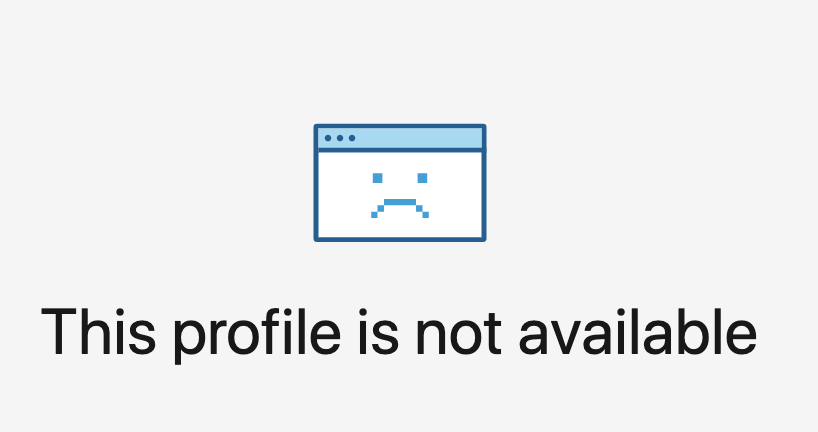 Nellie James, another of the appointees to the Kumul board, served previously as Mining Secretary after her appointment in December 2006. Before that she served in a variety of capacities within the Department of Mining. Subsequently, in 2008 James was appointed to head the Department of Mineral Policy and Geological Hazards Management.

Nellie James has faced some criticism from her predecessor, James Wanjik, a former Mining Department Secretary. However, Wanjik’s motivations and the evidence on which his allegations are based is not clear from online reports.

However, a 2010 news report featuring in both national newspapers, revealed Nellie James had been referred by the Ombudsman Commission to the Public Prosecutor for misconduct in office. The National reported:

Mineral policy and geohazards management secretary Nellie James, has been referred to the public prosecutor for alleged misconduct in office. The Ombudsman Commission made the referral yesterday following its investigations into the alleged misconduct arising from her failure to submit annual statements to the OC when they were due.

There is no subsequent news report on this referral or the final outcome.

The forth Kumul Minerals appointee Dr Mako John Kuwimb is described in the Post Courier as a ‘lawyer with extensive senior experience in policy advising, commercial law and public law. He has a PhD in the political economy of law and development’.

Turning to Hansel Maven, he currently serves as CEO of Metals Refining Operations a gold trading and refining form which is a wholly owned subsidiary of the Pacific Balance Fund. Hansel Maven is a business partner of Jimmy Maladina, through the company they co-own, Cam Guard Limited. Jimmy Maladina is one of the nation’s most controversial business figures. With close ties to former PM Peter O’Neill, he is a frequent topic on the pages of PNGi over irregular business deals, and censure from government oversight agencies.

Finally there is the lawyer Bonny Ninai. Ninai first gained public notoriety when he acted as the lawyer for then Prime Minister Bill Skate during the Sandline inquiry. Ninai attracted controversy in 2011 when he was reported to be on board a private Air Nuigini Falcon flight with Beldan Namah that sent two Indonesian fighter jets scrambling. The National reported in 2012:

It was known that the Falcon F900 had left Subang, Malaysia, on Nov 29 for Port Moresby and was flying through the approved route which included flying over Indonesian airspace. According to the Indonesian journalist, Indonesian authorities were tipped off that the aircraft was carrying substantial amount of cash in US dollars. Indonesia, which has very strict laws on money laundering, scrambled two military jets to “escort” the PNG carrier through its airspace until it reached PNG airspace … The passenger manifest listed Namah, Obura-Wonenara MP John Boito, Bulolo MP Sam Basil, private lawyer Bonny Ninai, Australian Anubhav Tadav and Malaysians Tee Kim Tee, Tan Bing Hua and Tan Keh Feng.

Ninai has previously served on the PNG National Forest Board, following his appointment in 2012.

In summary then Peter Graham has some grounds to argue Marape’s appointees to the Board of Kumul Minerals Holdings Limited have negligible industry experience. There is certainly some broad mining sector experience on the new Kumul board, but it does appear to lack hands-on private sector mining experience. That said, the new appointees have financial, legal and policy skills that would be relevant to their postings.

On the other hand there are some serious red flags, noted above, which lend further credibility to Graham’s concerns. They are not definitive evidence that any of the individuals is unsuitable for a board role at Kumul Minerals. But some of the personal ties, and past allegations, would certainly warrant further scrutiny had a thorough appointment process taken place.

And that perhaps points to the most significant problem identified in Graham’s letter. It appears Prime Minister Marape may have made a major decision without adequate consultation. This increases the risk that potentially inappropriate individuals have been selected, or individuals have been selected owing to their personal loyalties to the Prime Minister rather than due to appropriate skills and expertise.

With state holding vehicles being a frequent site of abuse and mismanagement, whatever the truth is in this case, Marape’s abrupt method in pushing through the decision will at the very least heighten industry and public concerns over resource governance under his Prime Ministership.