Up until 2013 the Western Highlands Provincial Government was the 80% owner of a 1,050 hectare coffee plantation (Rui plantation), with timber assets valued at K8 million alone. The provincial government’s interest was held through the company Canopus No 101 Ltd, which owns Rui plantation.

In a commercial deal described as ‘unlawful’ by the National Court, the Provincial Government sold off its interest in 2013 to Steven Pup for the heavily discounted price of K100,000.

This highly irregular sale was only brought to light because the minority shareholder, Pate Wamp, discovered the deal by chance when checking company records at the IPA. He then initiated litigation alleging the sale and associated transactions were in breach of the Companies Act 1997. In a scathing judgement Justice Anis agreed, awarding Wamp K3 million in damages.

At the centre of this controversy is the sizeable plantation held by Canopus No 101 Ltd. According to Justice Anis:

The land mass consists of 1,050 hectares. The Land itself, discounting the vast number of coffee trees on it as well as grown eucalyptus trees that are ready for harvest over its 1, 050 hectares, would have easily worth several millions of kina. Undisputed evidence adduced shows that Canopus purchased Rui Plantation from Rui Trading Pty Ltd, in 2005 for K1,000,000 … The value of the Land alone would have increased over time or since then. And if we were to add the value of coffee trees and timber to it as of 2013 or 2014, it would have been worth several more millions of kina.

Evidence submitted during the trial suggests that the timber assets by themselves were worth K8 million, according to a 2008 Forest Authority report.

Video: Family of the the Rui plantation’s former proprietor provides some historical background on the property.

Melpa Properties has a problematic record, according to researcher Joseph Ketan. Writing in 2013 Ketan observes, ‘Melpa Properties Limited, provides local politicians with money for pork-barrel politics’. He adds, it ‘has not paid any dividend in the past three years, although we do know that it owns properties, that it does make money, and that some of the money has been used by politicians and others outside the provincial budget’.

Melpa Properties sale of its stake in Rui plantation to Steven Pup, appears to square with this problematic history.

On 6 September 2013 a share sales agreement was signed between Melpa Properties and Komkaeli Holdings, a company the national court states is owned by Steven Pup. The Western Highlands Government agreed to sell its stake in Canopus No 101, worth several million kina according to court estimates, to Mr Pup for K100,000. 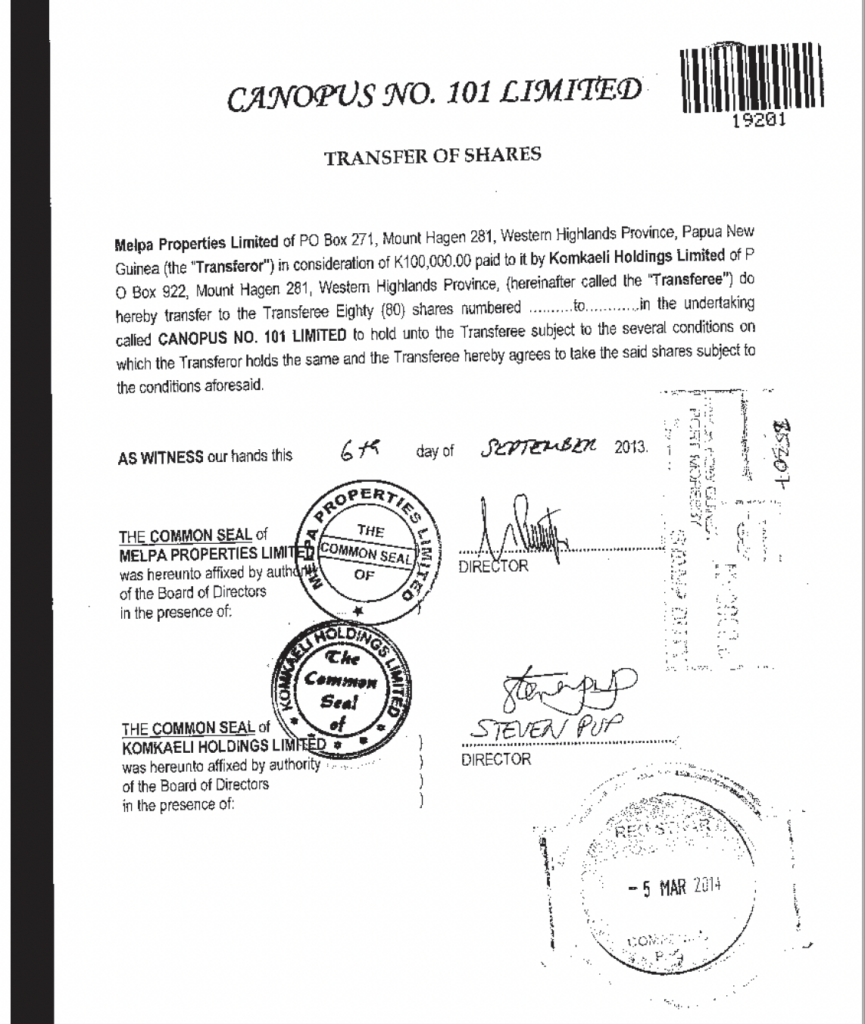 Even according to financial statements Pup himself signed off on directly, this sale was at a 95% discount. 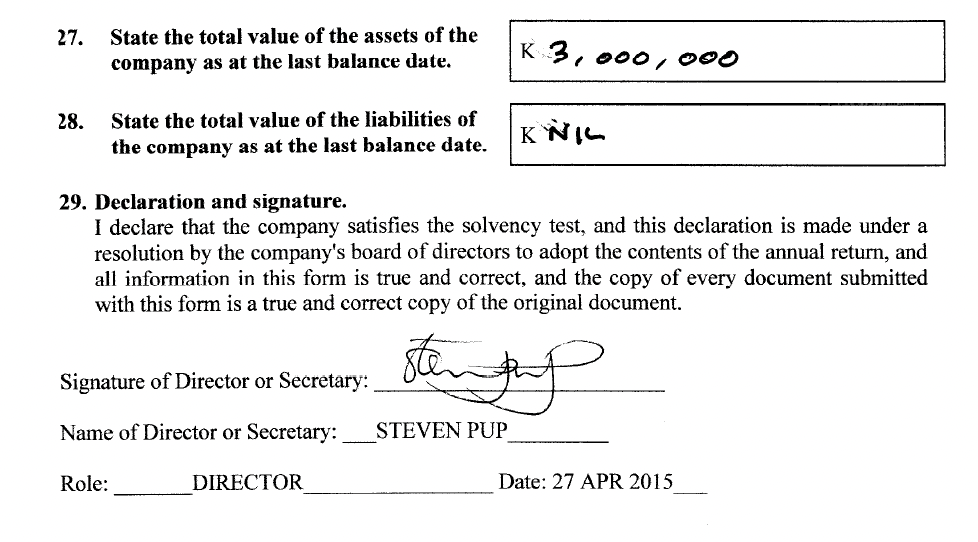 Extract from the Annual Return for Canopus 101 Ltd

Despite the change in shares, the Western Highlands Development Corporation continued to list its former 80% interest in Canopus No 101 in its current holding structure. 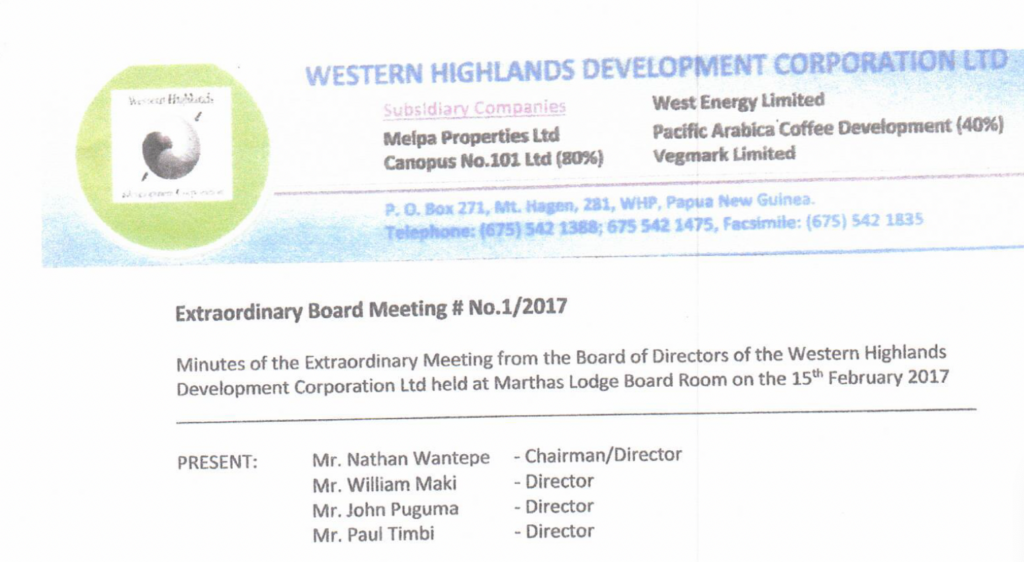 Extract from the minutes of a Board of Directors meeting for Western Highlands Development Corporation, 2017

Justice Anis notes that the transfer of shares was conducted in violation of requirements of the Companies Act, as was a move by Steven Pup to remove Canopus No 101 Director Pais Kar Tiki.

In addition, the National Court found Mr Pup ran Canopus No 101 as if it were his own personal property and made major decisions that had significant implications for the company, without following the legally required processes. These breaches were so egregious in the view of Justice Anis, that he awarded K3 million compensation to the minority shareholder Pate Wamp.

While Mr Wamp appears to have secured remedy, the same can not be said for the people of Western Highlands who have lost an extremely valuable asset in conditions marked by an extremely low sale price and unlawful dealings.

The Court noted, in particular, that the sale was ‘bordering on conspiracy’ between a number of provincial government appointees to Melpa Properties’ board and Mr Pup. Justice Anis observed Mr Pup ‘has, and I find as such, discreetly liaised with Mr Wantepe, Mr. Timbi and the other directors or executives of Melpa Properties and purportedly purchased the said 80 shares of Canopus’. He continues ‘I find the actions and inactions of Canopus, Mr. Pup, Komkaeli Holdings, Melpa Properties, Mr. Timbi and Mr. Wantepe, to be, with respect, highly suspicions’.

PNGi submitted questions to Mr Pup, confirming whether he is the same Steven Pup reported to be a Deputy Secretary at the Department of Works. Our questions also asked for Mr Pup’s comment, on the above sale.

He responded: ‘decision of Anis J, which you refer to in your email is currently being challenged and is the subject of a pending Supreme Court Appeal (SCA No. 102 of 2022 (IECMS) – Komkaeli Holdings Limited & Anor v Pate Wamp & Ors). I have therefore been counseled by my lawyer not to make any comments at this stage on matters that are before the Supreme Court’.

Documents - The Sale of Canopus No 101