‘’Whistleblower protection is an important action, and it is essential not only for detecting fraud, corruption and misconduct but also for safeguarding the public interest, for promoting a culture of accountability and integrity in both public and private institutions’’ – Davide Messina, European Union Delegation to Papua New Guinea, 3rd October, 2022

Detailed internal audit reports allege an on-going culture of corruption and mismanagement in the Department of Labour and Industrial Relations (DLIR).

Yet, while those audit reports lie gathering dust and the alleged fraudsters face no formal investigation, it is one of the auditors who has been suspended from duty and is facing dismissal after some of the audit findings were leaked to MPs.

The whistleblower has been praised by Prime Minister James Marape for exposing the alleged corruption. Nevertheless, the suspended auditor, Richard Pangwinyen, vehemently denies responsibility for the public disclosure of the audit findings.

Whoever was responsible for the original leaks, documents provided to PNGi detail the allegations of serious fraud, misappropriation and general mismanagement in the DLIR and the lack of action taken against the senior officers implicated.

Three separate audit reports, letters to Ministers, the Prime Minister and to the Department of Finance, and referral of cases to the police Fraud and Anti-Corruption Unit have all failed to elicit any effective action.

When the matters were raised in Parliament in August 2021, the Prime Minister promised an investigation. The Minister for Labour, Tomait Kapili, promised “whistleblowers are protected under the Whistleblowers Act and should not be afraid to expose graft”. And, the police Fraud and Anti-Corruption Division confirmed the allegations were under investigation.

Yet, more than a year later, no actions have been taken.

Below PNGi summarises the main allegations identified in the Internal Audit Unit reports and we reveal the charges of serious misconduct Mr Pangwinyen is now facing.

It is alleged that Isaiah was given the role of ICT Manager in 2012 after having earlier been suspended and then reinstated in his previous role in the Office of Workers Compensation, due to serious allegations of misappropriation and mismanagement of trust account funds.

As ICT Manager it is alleged Isaiah had ‘a chronic habit of hiring vehicles without the knowledge and approval of his Executive Manager or the Secretary’. This resulted, it is claimed, in payments of over K250,000 to one hire car company alone over a two-year period, and another payment of K460,198 to a separate car hire firm when a hire vehicle was written off in an accident – after the expiry of the approved hire period.

Even more seriously, it is alleged Isaiah engaged a number of contractors who claimed considerable sums for fictitious services. Some of those claims were rejected, but one claim that was paid out went to BeamTech Consulting Limited, which was paid K379,255 in June 2016.

PNGi reached out to the owner of BeamTech Consulting for comment but did not receive a response.

It is further alleged that it was the now acting Secretary, George Taunakekei, who, in his previous role as Deputy Secretary Operations by-passed normal vetting processes to authorise what is claimed to be fraudulent payment.

A second Internal Audit Unit report dated March 2020, alleges further fraudulent claims and payments, this time instigated through the Office of the Public Relations Officer, Remi Yariyari. In particular, the report claims K293,147 was paid to Virtual IT Systems as an advance for work that was never intended to be completed.

Once again, the current acting Secretary is implicated in facilitating the alleged fraud and by-passing proper payment procedures.

The owner of Virtual IT, Darby Joseph, did not reply to a request for comment.

The audit report also details other alleged attempts by Mr Yariyari to fraudulently claim payments, most of which were intercepted and prevented by officers in the Finance Division, Minister’s office or by the IAU.

One payment that was made, despite the intervention of the IAU, was a K21,839 claim for airfares from Port Moresby to Tufi. According to the auditors the claim was ‘exorbitant by K11,762’ and a ‘fraud’. Mr Yariyari did not respond when this allegation was put to him by PNGi.

The report alleges that from 2015-17, Taunakekei was overpaid a total of at least K191,000 in claims for advances and outstanding or unpaid salaries and allowances to which he was not entitled. The payments were fraudulent, says the audit, and were made in breach of the Public Finance (Management) Act, the Public Service (Management ) Act, Public Service General Orders and tax and superannuation laws.

PNGi attempted to contact Mr Taunakekei for comment on the alleged overpayment and other allegations made against him in the audit reports but was not successful in reaching him.

The audit report also alleges K1.2 million from the Work Permit Trust Account was fraudulently paid in 2017 to a series of small locally owned companies, including at least two owned by DLIR staff members, and the monies shared between the perpetrators.

Despite the detailed allegations against Mr Taunakekei set out in the April 2020 Audit Report and earlier Audit Reports, he was appointed to his current position as Acting Secretary in September 2021. 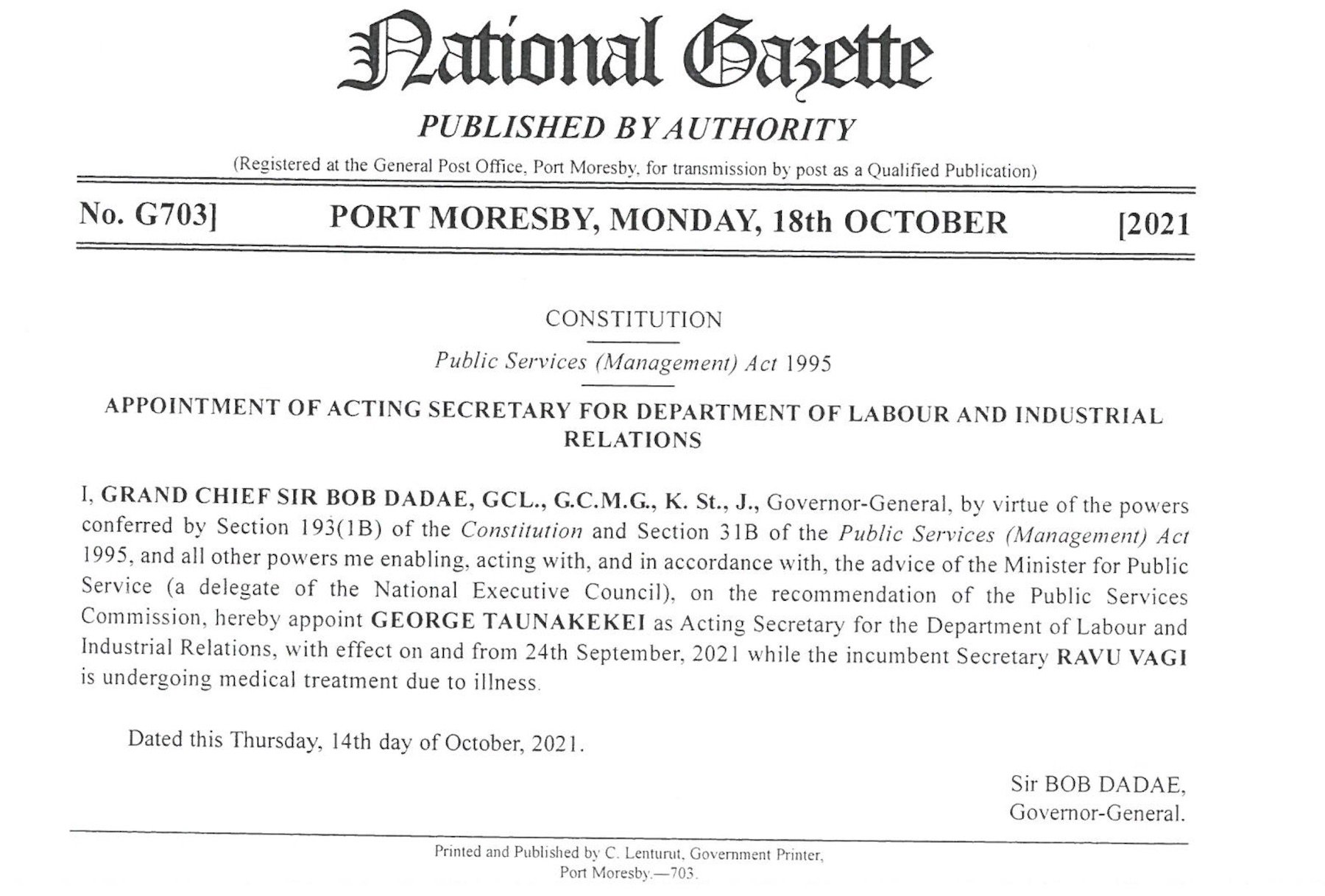 Gazette Notice dated October 2021 confirming the appointment of George Taunakekei as Acting Secretary for the Department of Labour.

Other allegations made against DLIR staff by the Internal Audit Unit, include excessive and unnecessary use of hire vehicles including by the acting Secretary. Corruption and breaches of financial regulations in disposal and replacement of Department vehicles by the Transport and Logistics Manager. Use of Department vehicles identified to be tendered and sold by DLIR officer’s family members and maintained at DLIR cost. A car hire business being run by the Assistant Manager Finance and Revenue, Felix Ragina, and re-hiring an ex-Department vehicle back to DLIR. When this specific allegation was put by PNGi to Mr Ragina he did not respond.

The audit report also details the engagement of Konevilla No. 1 as a contractor to construct office partitions at a total cost of K1,170,000, when the company is part-owned by the Executive Director of the Employers Federation of PNG, Florence Willie. Florence Willie serves on several DLIR Boards as the Employers representative.

According to the IPA website, Konevilla No.1 Consultancy Limited has not filed any Annual Returns since the company was registered in 2010

PNGi checks indicate Konevilla No. 1 has never filed an Annual Return with the Registrar of Companies. This is despite its sizeable contract with DLIR and being identified in a 2014 Auditor General’s report as receiving over K4 million in payments from Rigo District in 2010. Konevilla’s registered address is c/o The Employers Federation.

PNGi reached out to Ms Willie for comment but did not receive a response.

Other audit allegations include general mismanagement resulting in a back-log of more than 60 Industrial Disputes pending deliberation dating back over 6 years, excessive spending on Labour Law reviews and engagement of consultants with no output, excessive spending on database management systems and capacity development with no outcomes and even K41,500 spent on cleaning the in-coming Ministers office when another quote priced the work at just K16,000.

It is alleged when these and other maters were raised by the Internal Audit Unit through internal channels, the then Secretary, the late Ravu Vagi, withdrew certain roles and functions from the Audit Unit in a Circular issued in February 2021. 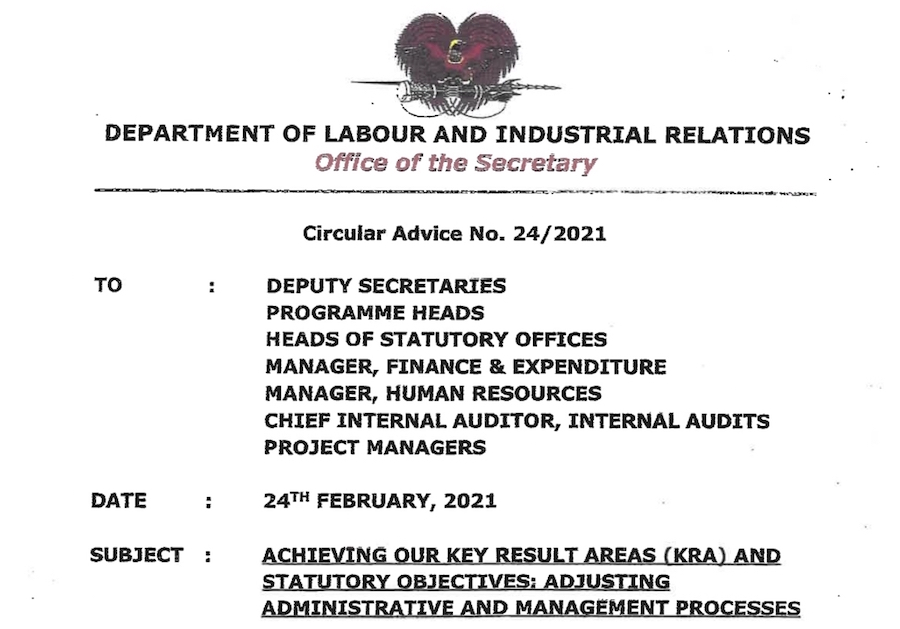 In response to complaints of fraud and financial mismanagement the Department Secretary issued a circular withdrawing certain internal audit functions.

Crucially, the Secretary ‘suspended until further notice’ the Internal Audit Unit’s ‘pre-expenditure audit process’. This was necessary, it was claimed, as ‘the slow and tedious internal processes such as expenditure processing’ were inhibiting the Department’s ability to deliver on its key objectives.

This decision, it is alleged, allowed the questionable financial spending to become ‘normal and rampant and perpetrated with impunity’.

PNGi has uncovered some corroboration for the Internal Audit Unit findings in the reports of the Auditor-General.

The Auditor General’s Office has not published an audit of the accounts of the DLIR for any financial year since 2015, but in that most recent report the AGO concluded:

The results of my audit indicate that overall, there were notable weaknesses in the control framework. The control activities such as delegations, authorisations, reconciliation, data processing, segregation of duties and management monitoring were not sufficiently robust to prevent, detect or correct errors or fraud.

Particular areas of concern noted by the AGO included more than K5 million in travel and cash payments that remained outstanding and no recovery action taken against officers who failed to acquit for their advances. There was no Policy Manual covering staff use of assets including vehicles and mobile phones. The AGO identified 17 vehicles purchased by the DLIR that were privately registered and mobile phones and other assets valued at almost K300,000 not recorded in the asset register.

The AGO also noted numerous payments made without authorised officer approvals or certification, payment records with no tax invoices attached, and unauthorised payments for car hire.

Of a random sample of 222 payments checked by the auditor, in 166 cases (75%) the payment vouchers could not be provided and ‘therefore, the authenticity and propriety of the payments made were not ascertained’.

Despite the Prime Minister’s fine words, on September 4th, Richard Pangwinyen, who is accused of being the whistleblower, was charged with three serious disciplinary offences and suspended from duty. 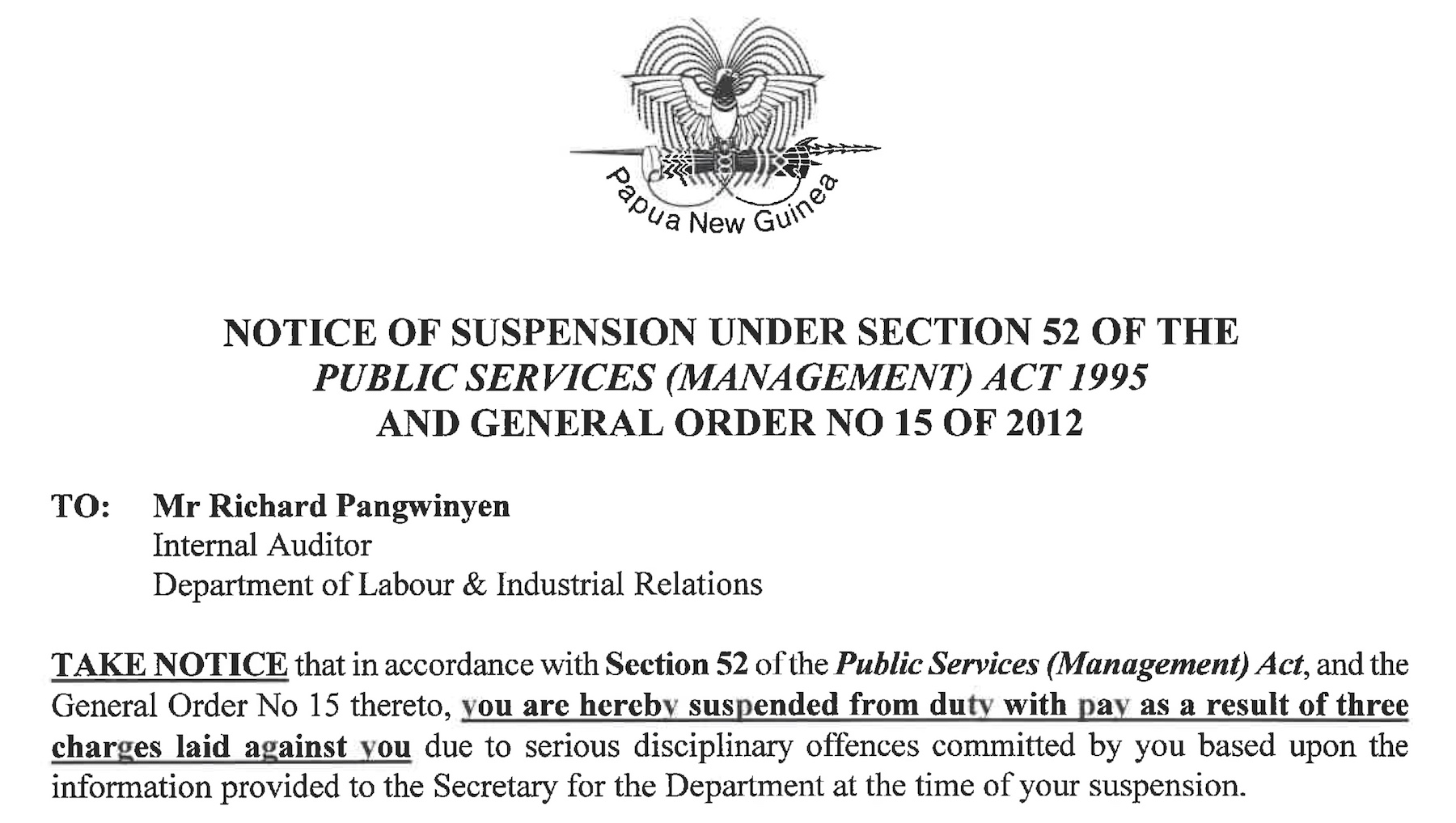 Internal Auditor Richard Pangwinyen has been suspended from duty by the Department of Labour and is facing three disciplinary charges.

The three charges all relate to the alleged removal from the Department of Labour of a ‘Confidential Audit Report of April 2020’ which, it is alleged, resulted in a Member of Parliament providing the information to Parliament and the fraud squad.

The second charge alleges Pangwinyen breached the General Orders by divulging confidential information concerning public business or matters of which he had official knowledge without authorisation.

The third charge accuses Pangwinyen of ‘disgraceful or improper conduct in his official capacity’ by facilitating the provision of the Audit Report to persons outside of the Department which harmed the reputations of the named officers.

When PNGi asked Mr Pangwinyen about his suspension and the charges he face, he categorically denied all three charges.

Mr Pangwinyen says he has no knowledge of and nor did he participate or facilitate in the delivery of the Confidential Audit Report of April 2020 to any Member of Parliament, be it the Opposition or Government, to raise on the Floor of Parliament in August 2021.

Just a few weeks ago, the United Nations Development Program conducted a whistle-blower protection training for public officials in PNG.

The three-day training was delivered in conjunction with the Department of Justice and funded by the European Union under its ‘Preventing and Countering Corruption in PNG’ project.

At the training it was revealed that PNG’s much heralded Whistleblower Protection law, passed by Parliament in 2020, has never been implemented. PNGi has previously detailed grave reservations about the inadequate scope and effectiveness of the law when it is finally in use.

None of this though provides any solace to Mr Pangwinyen. Unlike the politicians who pretend to be sincere about fighting corruption but whose words are empty, unlike the foreign governments who pretend to be helping but allow fugitives to hide in plain sight and are happy to see the proceeds of crime in PNG fuel their own economies, Mr Pangwinyen’s career and the wellbeing of his family are on the line simply because he has tried to do his job to the best of his ability and to document examples of the entrenched corruption that is rotting our public service and denying ordinary citizens access to decent health and education services.

Is there anyone who is going to stand up and help him now his audit findings have leaked out?