The Office of Workers Compensation (OWS) keeps statistical data on workplace injury and deaths, which companies by law must report to the office. For a period in 2020, they published the data online in a searchable database – it was then removed.

We do not know the reason why. But it has had the effect, however, of shielding bad performers from public scrutiny.

According to the data released in 2020, if measured by volume of reported workplace injuries and deaths alone, one of the worst performing company in PNG is New Britain Palm Oil Limited (NBPOL).

From 2012-2019 there were 268 workplace injuries and 16 deaths reported by the company to OWC. Though NBPOL’s own data suggests the latter figure may not fully capture actual workplace deaths at its workplaces.

According to the company’s website, class 1A incidents, which is deaths, amount to 20 in the period 2015-2020.  The reason for the discrepancy is not clear. Global Witness reports ’employers who fail to give notice of employees’ injuries or deaths are guilty of an offence under the PNG Workers’ Compensation Act’

Each injury and death has a name and story. Take Harry from North Bougainville. According to OWC records, the assistant fitter was killed when he fell into a conveyor at Kimbe on 15 July 2019, at the age of 36. Another workplace fatality is Pius from New Ireland, he died after a brick block wall fell on him during 22 July 2017.

Many of the injuries reported are serious and life changing. Charles from West New Britain is reported to have lost his hand in a sawmill accident on 2 June 2011. Luke cut his achilles tendon with a knife in a fall at a plantation in West New Britain.

In response to queries from PNGi, NBPOL states: ‘Occupational health and safety is a key focus area for the company. All executive employees have this firmly in their performance appraisals. In terms of improvements in OHS performance, as an example, the lost-time injury rate has reduced 8-fold in the last 7-years. This is not possible without a huge focus on improving and maintaining OHS performance’. 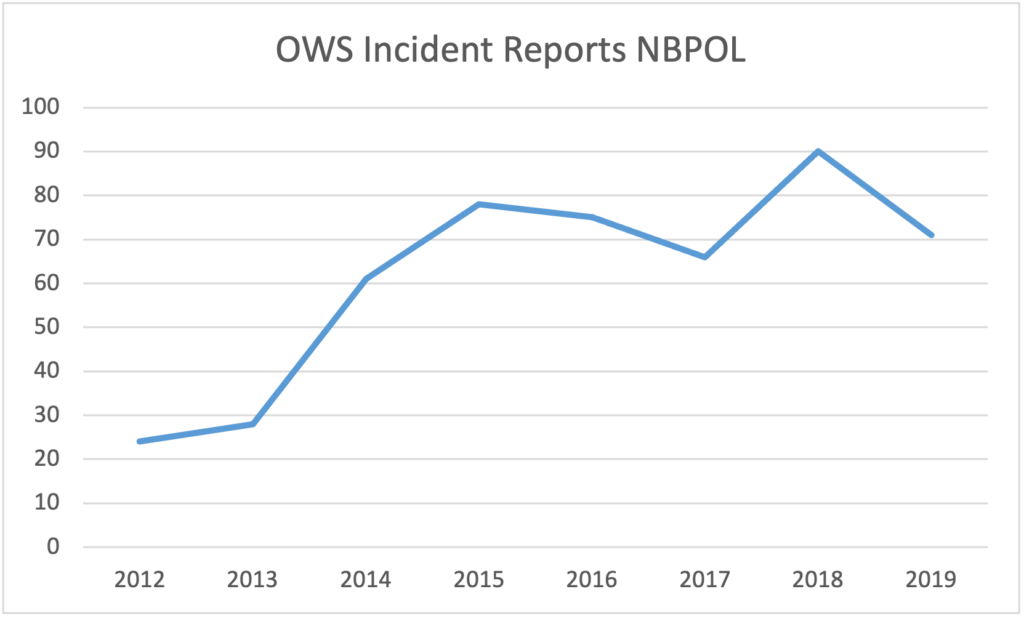 NBPOL also maintain that as a percentage of workforce these incidents are small: ‘The inferences you are making are not taking into account the size of companies/organisations you are comparing. NBPOL is the largest private-sector employer by far with just under 24,000 employees on the payroll. Most other large companies would have employee numbers in the 4 figure range and most with hundreds. To compare properly you should use incident rates.’

We asked NBPOL to confirm whether 24,000 employees was the full time equivalent figure, or whether this included part-time and temporary employees. They did not respond.

Of course, there are other worrying performers in the same sector. Global Witness notes ‘At least 12 people died on the RH plantations between 2012 and 2020. Eleven of these were RH employees, and one was an employee’s school-aged dependent. Over the same time span, a dozen more were involved in serious accidents, some life-altering’.

Without a unionised workforce, properly resourced regulators, and the application of sanctions against poor performers, it is difficult to imagine these trends will reverse.