Our focus is on a single payment of K394,000. It was made on the 8th of April 2020, to Pacifica Limited, for ‘Mobilisation of Pacifica Team’ under a contract titled ‘Communication Coordination’.

According to the government’s procurement website, there was no tender or bidding process for the contract. Pacifica was chosen by ‘Direct Selection’. 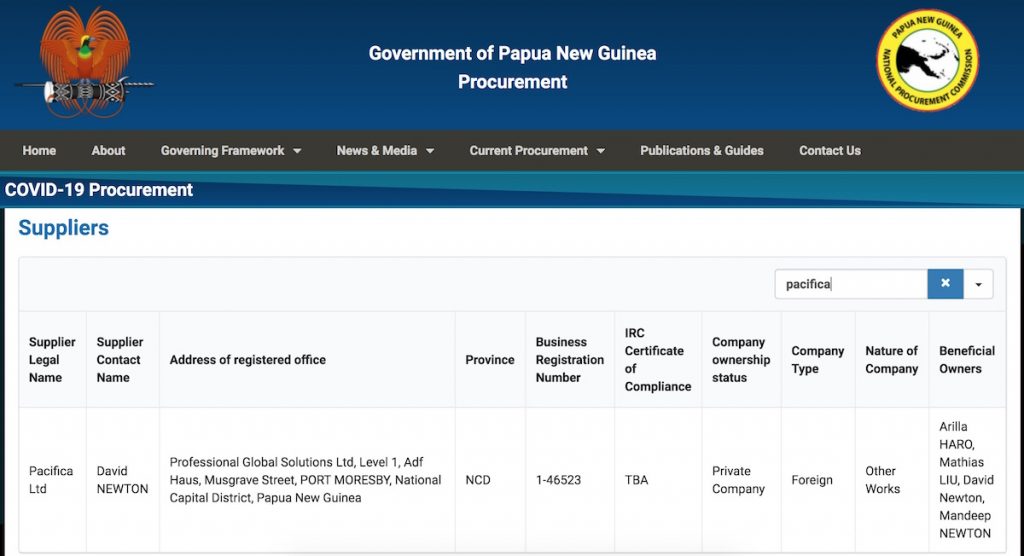 The transaction has attracted attention for a number of reasons.

Firstly, Pacifica Limited was ‘directly selected’ and awarded the contract with no tender or bidding process. Secondly, no further detail has been provided on what the ‘Mobilisation of Pacifica Team’ actually involves, and how it has contributed to the government’s pandemic response. Thirdly, because two of Pacifica’s ‘beneficial owners’ were until recently working on a World Bank funded project and within days of the contract becoming public knowledge, they exchanged legal ownership of the company. Finally, Pacifica Limited has not filed any annual returns since 2011 and, according to the government’s website, did not provide a Certificate of Compliance from the Internal Revenue Commission.

It cannot be inferred from these factors that the payment made to Pacifica Limited is illegitimate. There are, however, a number of serious questions that deserve public answers:

What services did Pacifica provide in return for the K394,000 it was paid?

On what basis was Pacifica ‘directly selected’ and how did the government ensure the contract represented good value for money?

Why was Pacifica awarded a government contract when it was unable to provide a certificate of tax compliance from the IRC?

Are there any potential conflicts of interest for the staff of World Bank funded projects to own a company that is a contractor to the government?

Pacifica Limited has not responded to an email request for further information.

The two central figures involved in Pacifica Limited’s ownership and governance over the past five years are an Australian couple, Mandy and David Newton.

David Newton, according to his online curriculum vitae, has been the Managing Director of Pacifica Limited since March 2015.

From 2015 until December 2019, David Newton was also the company’s sole shareholder.

Mandy Newton meanwhile was until recently working inside the National Capital District Commission as Team Leader for the World Bank funded PNG Urban Youth Employment Project. She worked on the Project for more than six years. Before that Newton worked for Bank of South Pacific having apparently moved to Port Moresby from Sydney in 2011. 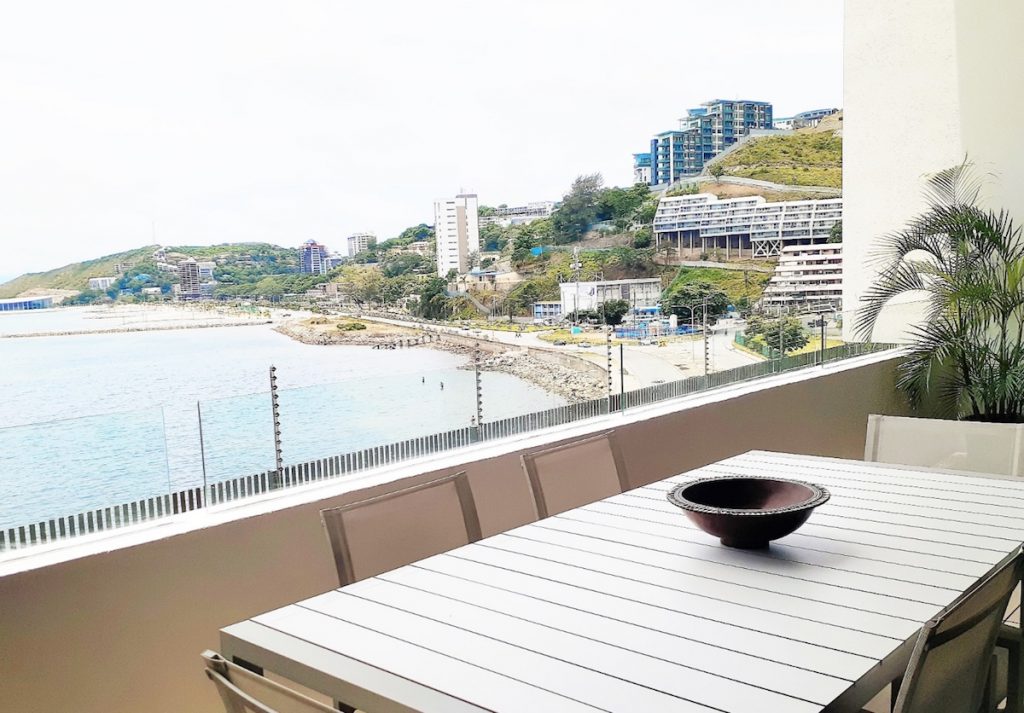 Like David, Mandy Newton has been involved with Pacifica Limited since 2015. In the company records she is listed as Mandeep Newton, which is her legal name.

When David Newton acquired the shares in Pacifica during July 2015, he became the sole director and Mandeep Newton was appointed company secretary. Four years later, in July 2019, the pair swapped roles. Mandeep replaced David as the company’s director and David took over Mandeep’s previous role as company secretary.

In December 2019, when David Newton sold legal ownership of the company shares, Mandeep was removed from the Board, she remained involved though, switching back to her old role as company secretary.

Five months later, on April 27 2020, Mandeep Newton acquired ownership of the company shares. At the same time, she resumed her old position on the board. 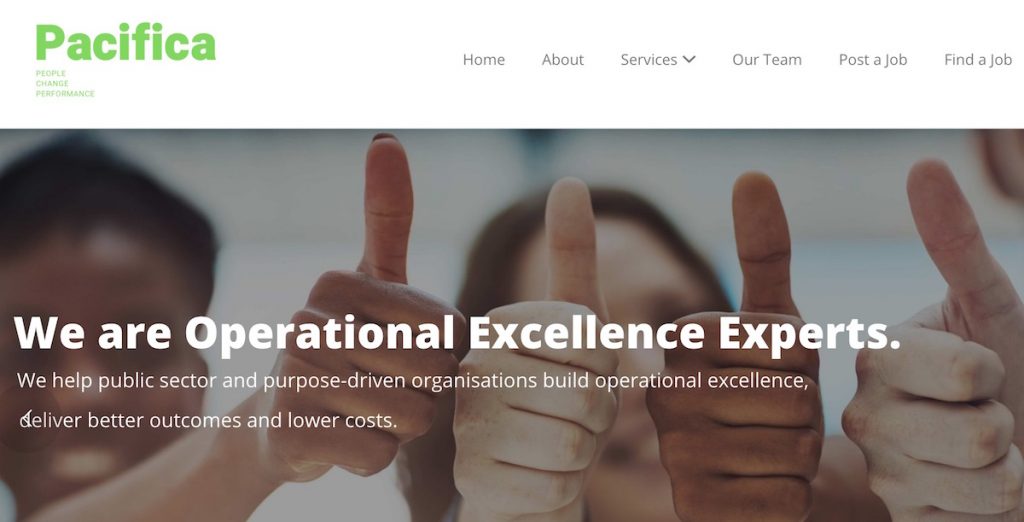 IMAGE – Despite its flashy website, Pacifica Limited has not filed an annual return since 2011.

According to the government’s procurement website when the ‘Communications Coordination’ contract was awarded to Pacifica Limited in the first week of April, the beneficial owners of the company were Arilla Haro, Mathias Liu, David Newton and Mandeep Newton. [postscript: after this article was published the list of beneficial owners of Pacifica Limited on the government procurement website was changed and the names Mathias Liu and David Newton removed].

According to the IPA records, from December 2019 until April 27 2020, Mathias Liu owned all the issued shares in Pacifica Limited.

On 27 April, just 19 days after Pacifica received K394,000 from the Department of Health, and 10 days afterPNG Blogs  publicly revealed details of the payment, Mathias Liu transferred ownership of the company to Mandeep (Mandy) Newton.

Mathias Liu and Mandy Newton were colleagues in the same World Bank funded Urban Youth project from some years.

Image: This World Bank document from 2018 shows Mandy Newton and Mathias Liu as colleagues in the Urban Youth Project.

At the same time, Arilla Haro and Mandy Newton joined Liu on the Board of Directors and Haro took the role of company Secretary.

None of these recent changes in the ownership of the company are reflected in Pacifica Limited’s foreign company certification. According to that record, Pacifica Limited is still owned by David Newton. 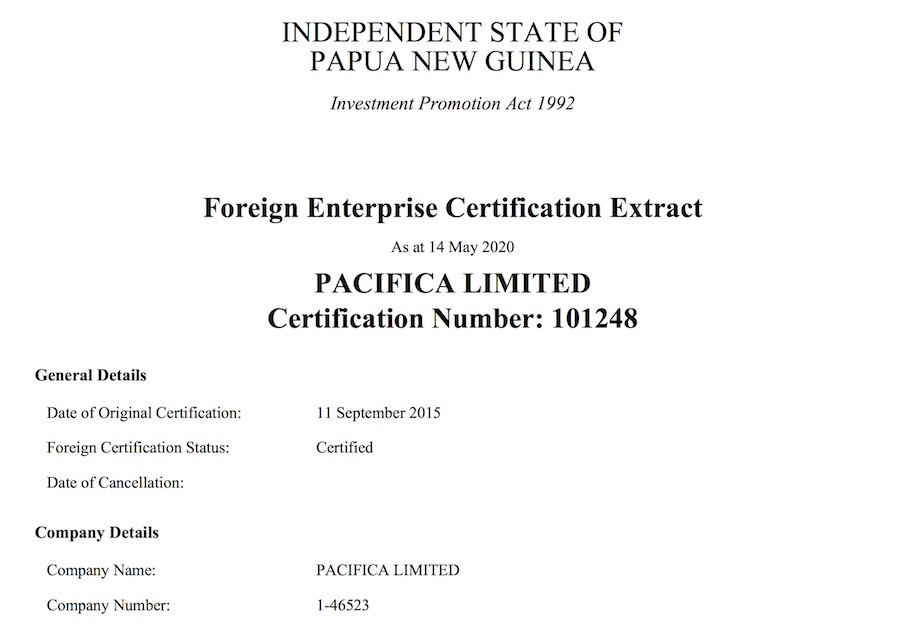 Image: According to the Foreign Enterprise records, Pacifica Limited is still owned by David Newton.

So, on the face of the records we have a few interesting facts:

Pacifica Limited is not the only company owned by Mandy Newton. She is also the sole shareholder, director and company secretary of Professional Business Solutions Limited; a company in which Mathias Liu has also been recently involved.

Indeed, Mandeep Newton acquired ownership of PBS from Mathias Liu on the very same day she took ownership of the shares in Pacifica Limited, 27 April 2020. 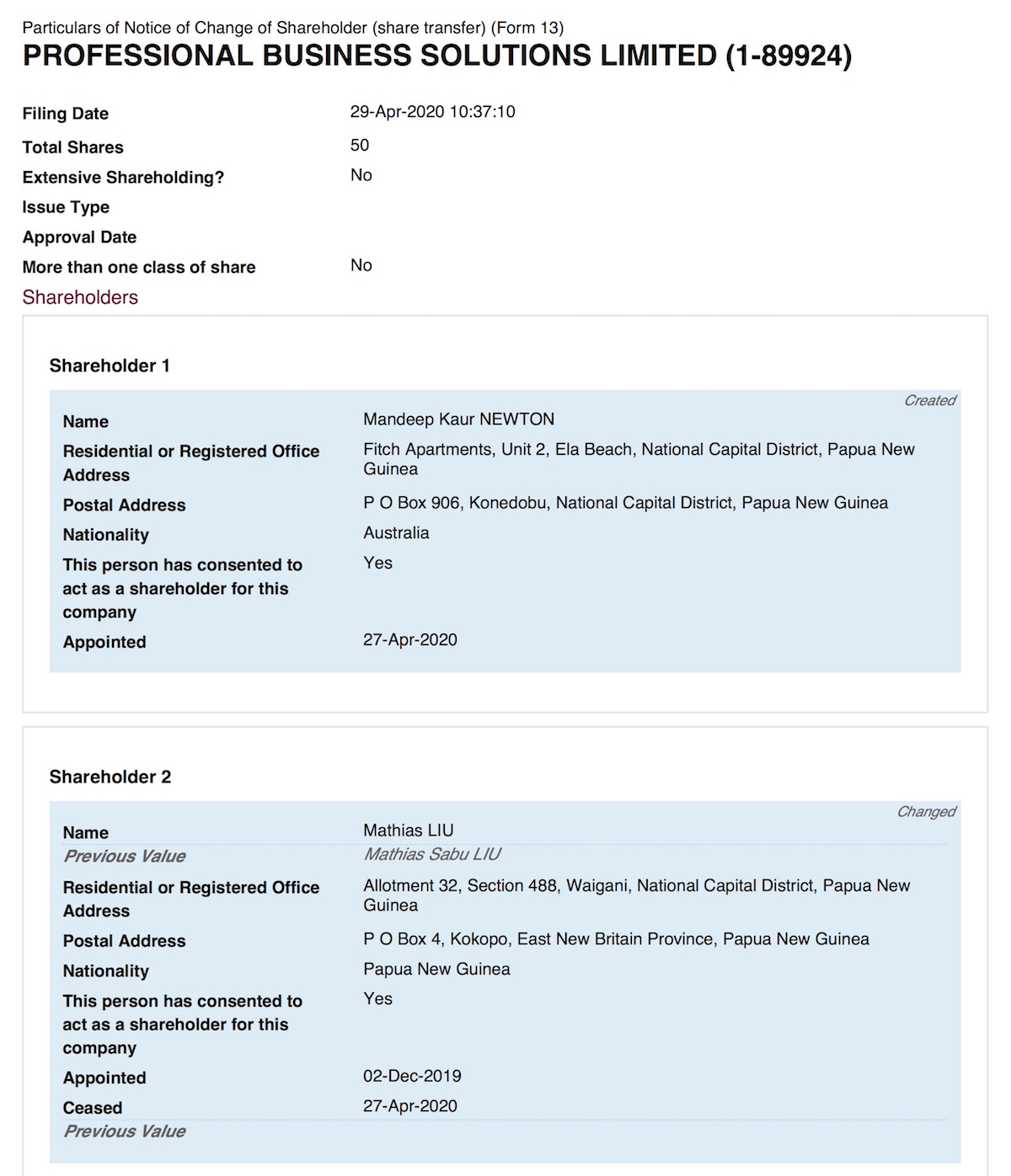 Image: Mandy Newton acquired ownership of PBS from Mathias Liu on the very same day she acquired the shares in Pacifica Limited

The similarities with Pacifica Limited don’t end there. Just as with Pacifica, Mathias Liu had been the legal owner for just 5 months before he sold the company to Mandy, and he had originally acquired the ownership from David Newton.

Also mirroring the history of Pacifica, Mandeep Newton’s involvement with PBS dates back much further. When PBS was first registered in 2013, Mandeep Kaur Ahluwalia was the listed owner, a director, and company secretary. Ahluwalia is Mandy Newton’s maiden name.

Pacifica and Professional Business Solutions are not the only businesses the Newton’s have an interest in and Mandy Newton in particular has some powerful business connections.

It is a company she jointly owns with Lynn Dora Micah, Jean Eparo and Martha Kaia.

According to an article published on PNG Blogs, Lynn Dora Micah is the wife of former government Minister Ben Micah. Ben Micah has featured in a number of PNGi reports and been implicated in numerous corruption allegations, all of which he denies.

Jean Eparo, or Jean Margaret Eparo Parkop to give her her full name, is the wife of National Capital District Governor, Powes Parkop. The postal address used by Jean Eparo, P.O. Box 71, University, is the postal address of her husband’s law firm. Jean and Powes, togther with Marcel Parkop, jointly own Siruwa Holdings Limited.

Mandeep Newton is also company secretary and a director of Sonu Development Limited. This is a company registered in June 2016 and owned by David Newton.

Just like Ethos 4, and Professional Business Solutions and Pacifica since they were acquired by the Newtons in 2015, Sonu Development has never filed an annual return. 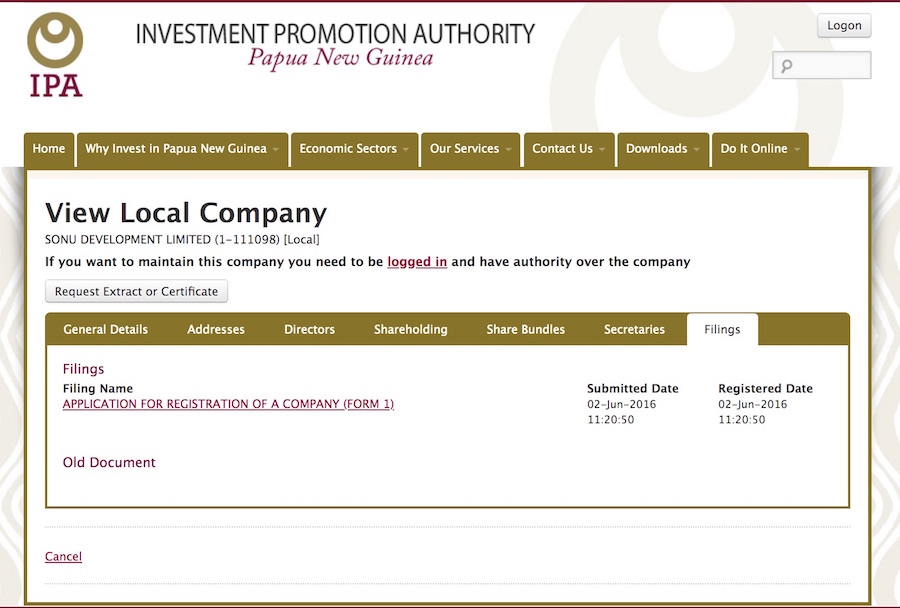 Image: Sonu Development Limited has never filed an Annual Return with the IPA

A company’s annual return is an important governance document that every company is compelled to file. Under the Companies Act 1996, it is an offence punishable by a fine of up to K100,000 for a director of a company not to ensure an annual return is filed.

In total Pacifica, Professional Business Solutions, Ethos 4 and Sonu Development have failed to file at least sixteen annual returns while owned by the Newtons.

Was the K394,000 received from the Department of Health the first time Pacifica Limited has received money from a government department?

No, not according to a well placed source who alleges that during the Pacific Games in 2015, Pacifica Limited and Pacifica HR (a business name owned by Pacifica Limited) were the beneficiaries of a number of lucrative contracts from the National Capital District Commission and sports bodies.

The games were held from the 4th to the 18th of July, just days after David Newton acquired ownership of the company and Mandeep (Mandy) Newton became company secretary.

PNGi has not seen any documentation to substantiate these allegations. Their veracity is worthy of further investigation, as is the K394,000 payment from the Department of Health.

Entity extracts for the company’s in which David and Mandy Newton are involved.