Last Friday Justice Anis delivered a judgement in the National Court that threatens to engulf Foreign Minister Patrick Pruaitch in another major scandal.

The court case centres on an overdraft facility granted by Kina Bank Limited (then known as Maybank Limited), to Patrick Pruaitch in or around 11 July 2014. Initially it was in the amount of K1,500,000, subsequently reduced to K1,240,000

At the time Pruaitch had just left the forestry portfolio to become Treasurer in the O’Neill Government.

To secure the overdraft facility for Pruaitch, Kina Bank alleges that a third party, Karridale Limited, offered as security, State Lease, Allotment 7, Section 55, Boroko. Additionally it is claimed Karridale’s director and majority shareholder, a Malaysian national, Danny Chiu Chuan Uong, agreed to act as guarantor. The guarantor, in effect, assumes liability for the debt in the event that Pruaitch defaults.

The mortgage facility and guarantee are significant facts. Karridale Limited is a fully Malaysian owned company, involved previously in transactions flagged by the Auditor General for high corruption risks.

In 2014 Karridale Limited was also pursuing a license over major timber reserves on Woodlark Island. At the time Professor Corey Bradshaw from the University of Adelaide observed: ‘The company is being elusive about its plans and doesn’t appear to have consulted adequately with the local communities’.

Arguably, this is not the sort of company the outgoing Forestry Minister, and incoming Treasurer ought to be having private business relations with. It also raises questions over why a commercial bank would approve a loan to a politically exposed person secured against property owned by a foreign company, given the major red flags such a transaction involves.

Judge Anis also concluded that Uong is personally liable as guarantor for this debt, and in addition Justice Anis stated the mortgage over Karridale Limited’s Boroko state lease was properly executed.

In total Judge Anis placed Prauitch’s liability at K1,635,057.69, and ordered the Boroko property belonging to Karridale be forfeited and sold to help pay back the debt accrued by Pruaitch.

This follows in the wake of Pruaitch dodging and stymieing a Leadership Tribunal for fifteen years, with his counsel using means described by the courts as improper and vexatious. 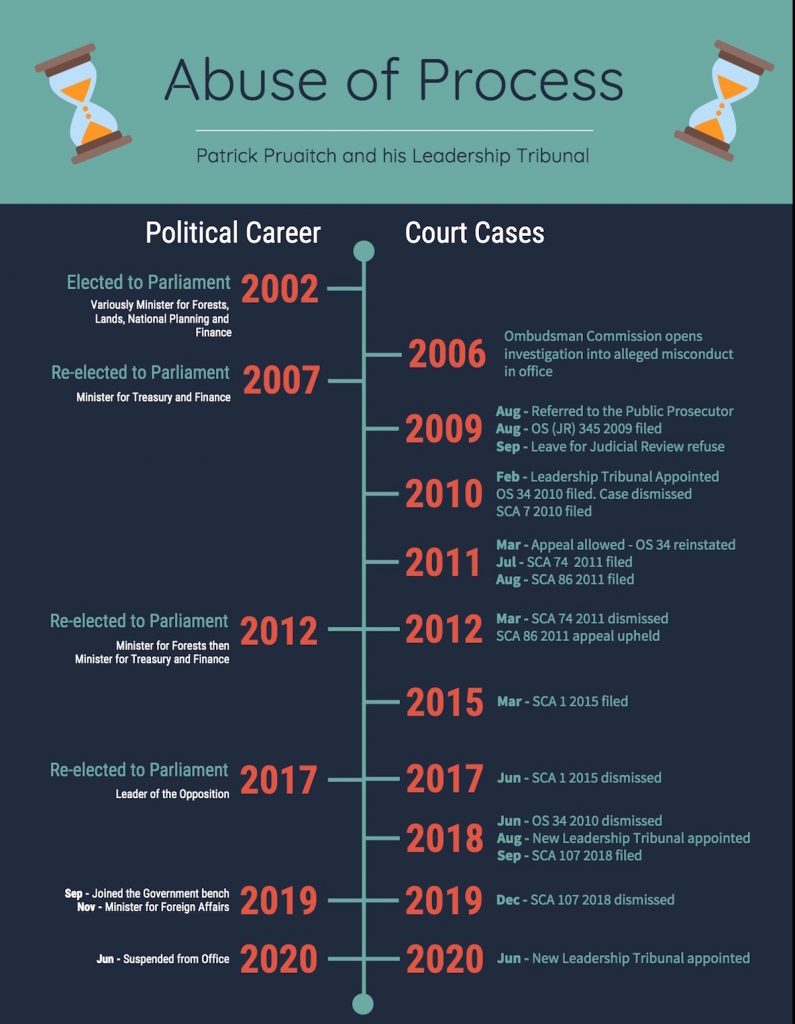 Karridale Limited has also previously been in the public spotlight. It featured in an Auditor General’s Office report on Service Delivery Performance in the Provinces of New Ireland and Milne Bay 2013-14. The Auditor General observed:

At the first JDP&BPC meeting of 2011 it was resolved to purchase 40,000 sheets of roofing iron under the Healthy Island Living Concept Program. Quotations were received from three companies; one for K2,465,991, another for K3,864,960 and the successful bidder Karridale, for K2,344,000. Procurement of this value is supposed to be facilitated through open tender managed by the Provincial Supply and Tender Board. However, on 3 February 2013 K1.3 million was paid to Karridale Limited, with the payment divided between five separate invoices which were virtually identical to each other. Splitting a single procurement into multiple invoices to avoid review or competitive selection, can be a strong indicator of corruption. [Italics added]

Set against this backdrop, last week’s National Court decision raises a new set of key questions. Why would a company that is pursuing a controversial logging permit agree to put up its own state lease as security, so the Treasurer can enjoy a large personal overdraft facility? Why would Danny Chiu Chuan Uong agree to act as guarantor? Was this all declared to the Ombudsman Commission? Did they investigate this dealing?

It cannot be inferred from these facts alone that this arrangement was corrupt in nature. However, they are questions whose answers will surely be of interest to the public in light of the enduring governance clouds lingering over the Foreign Minister’s head.

One of PNGi’s readers posted the following document in response to the original story. 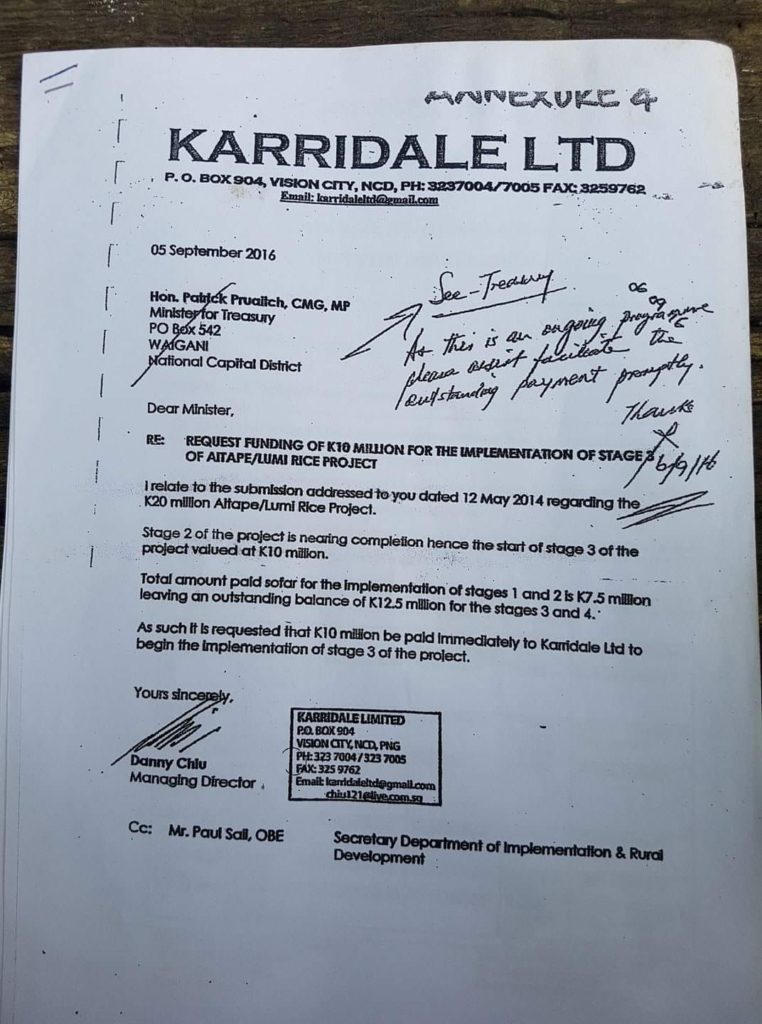 The letter appears to be addressed from Karridale principal Danny Chiu to the Treasurer Patrick Pruitch. It requests approval for stage 3 of the K20 million Aitape/Lumi rice project. The original submission evidently was made to Pruaitch on 12 May 2012. From the contents of the letter it appears to have been approved. This submission occurred several months before the Kina Bank overdraft facility to Pruaitch was approved following security provided by Karridale Limited, and a personal guarantee provided by Danny Chiu. This adds a new line of inquiry that we expect should interest authorities.