Papua New Guinea’s COVID response has been undermined by ‘a cabal of multilateral agencies and international non-government organisations’, according to the country’s Police Commissioner and COVID Response Controller.

Commissioner David Manning claims these international agencies have hollowed out Papua New Guinea’s Department of Health (NDOH) and intercepted donor funding for their own ends.

These actions, he says, have compounded the long-standing mismanagement and corruption in the health sector and, as a result, the NDOH has ‘become parasitised by individuals and organisations that do not have our people at heart’.

In todays PNGi investigation we detail the serious allegations made by Commissioner Manning in his keynote address. In the meantime our investigations are continuing into key individuals in ‘the cabal’ and specific allegations of misconduct.

Delivering the keynote address at a recent regional forum, organised by the World Health Organisation and hosted by the University of Melbourne, David Manning, said when he was appointed to head the national pandemic response he was under no illusions about the task ahead.

Manning notes the government already had a ‘complete lack of faith in the National Department of Health’.

Prior to COVID, as Police Commissioner I was aware of the regular scandals involving the [health] department, corruption and drug supply purchases, continual outbreaks of preventable diseases, staff protests and woefully dangerous immunisation rates, just to name a few.

Despite this pitiful state of affairs, Manning says he was taken by surprise when he found the situation to be even more dire than he had expected.

… the Department of Health has become little more than a show that is managed by a cabal of multilateral agencies and INGOs [International Non-Government Organisations]. It is these organisations that manage the day-to-day direction of the department. Officers look to them to write their emails, to send them on trips, to write their plans, to do pretty much everything for them.

The multilateral agencies and international NGOs also control the Department of Health’s budget, according to Manning. It is this control, he claims, that has led to the generous financial support PNG has received for its COVID response, being diverted into the agencies own coffers.

In the early stages of the pandemic, the world through multiple donor partners was very generous to PNG in terms of financial support. Our problem was that most of this money was intercepted by these parties using NDOH as a rubber stamp.

When asked for comment on the specific characterisation of the WHO and other multilateral agencies and INGOs as parasites that run the day to day affairs of the NDOH and control its budgets, the WHO chose not to provide a direct response. Instead they issued a general statement saying the ‘WHO has worked closely with the Pandemic Controller, the National Control Centre (NCC), the National Department of Health (NDOH) and other partners to support Papua New Guinea’s response’. The full statement is reproduced below.

According to figures collated by the United Nations, the amounts of money that have been provided to PNG for its COVID response are huge. Since the start of the pandemic, the UN says, PNG has received over US$284 million in COVID related funding (equivalent to @ K995 million). 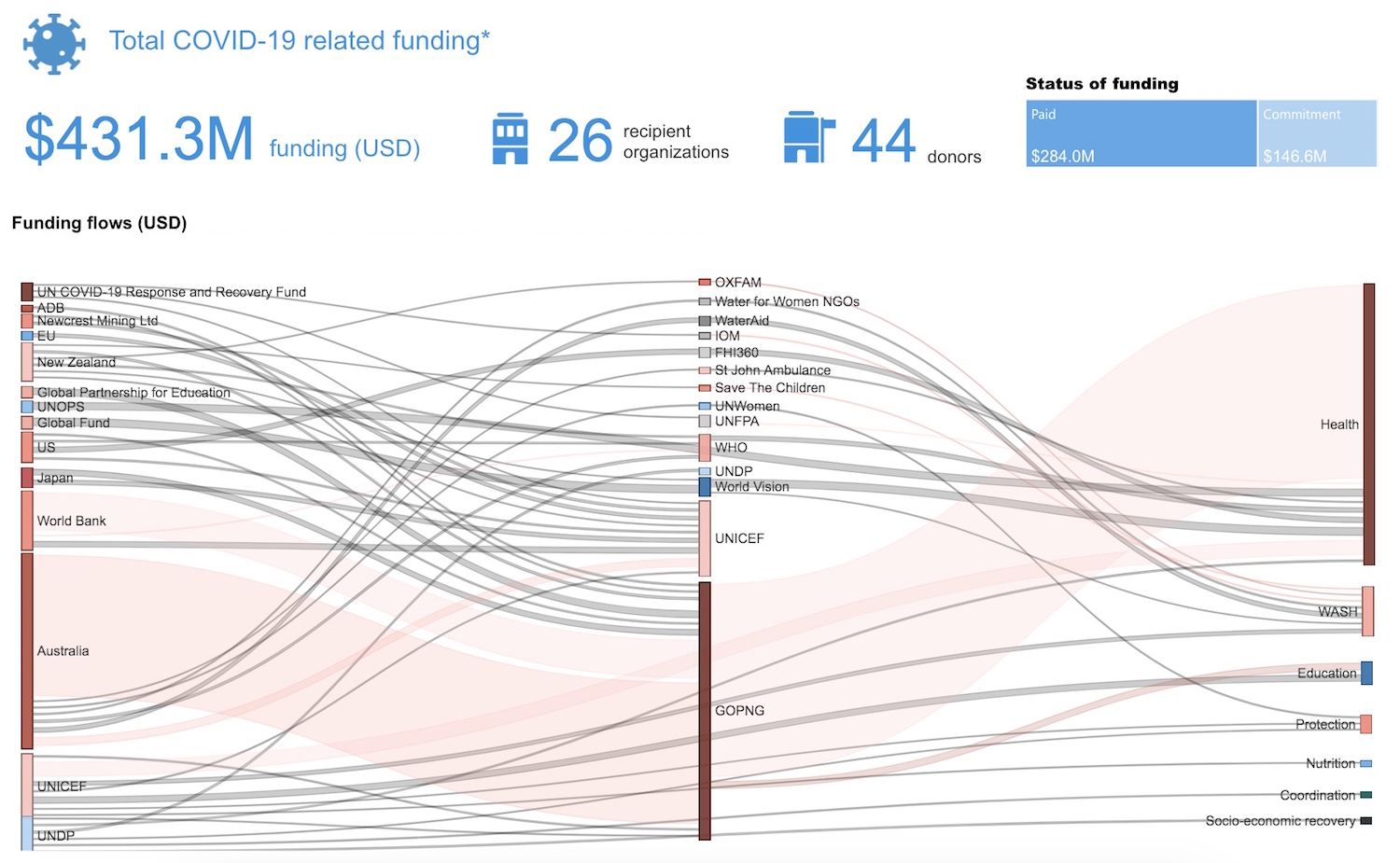 Although the bulk of the money, some 75% of the total, appears to have been directed to the government, it is Manning’s claim that a sizeable portion of those funds have been ‘intercepted’  by the multilateral agencies and INGOs. If true, this would be on top of the significant funds that have been committed directly to them such as $38 million to UNICEF, $12 million to World Vision, $6 million to the WHO and another $6 million to WaterAid, for example.

As well as intercepting government funding, Manning alleges the multilateral agencies and INGOs have also undermined the COVID response by failing to cooperate with the National Control Centre, withholding information, running independent programs and not following instructions.

While we were trying to run contact tracing at the NCC with volunteers, millions of dollars were given to NGOs to do the same job – without informing us in the NCC. They undermined our data systems, and disobeyed my directions to set up parallel systems, and advised the struggling disease surveillance team accordingly.

Manning also claims the systems set up by the international organisations failed to work, resulting in a massive under-reporting of COVID case numbers.

The country was told we were not having outbreaks, and that our caseload was low, when in truth, it was ten times as bad.

The WHO declined to comment on these specific allegations in a statement to PNGi.

Embarrassingly, we are now at 1.5% national vaccination rate… We’ve had WHO, UNICEF lead on the risk communications to address vaccine hesitancy, not the National Department of Health. The funding given for use for educating people have since dried up and half the country still does not even know where there is a vaccine available.

Manning has vowed that the crisis he has uncovered in the management of the health sector will be rectified.

This crisis cannot be put to waste. We will build back the health sector into something the whole country can be proud of.

While some may see Manning’s analysis as self-serving and an attempt to pass blame, he is not the first to point to flaws in the international response to PNG’s failing health system. PNGi has previously reported on how international programs can be infected by corruption and mismanagement and fail to deliver meaningful outcomes while they ignore the most obvious signs and symptoms.

PNGi has also previously reported on the red flags raised in the governments own COVID-19 response spending and raised questions about some of the firms selected to supply goods and services. When it was revealed in March an NDOH staff member was the director of a catering company paid over K500,000 to supply catering at an empty COVID isolation centre, the Prime Minister promised the case would be investigated by the office of the newly created Independent Commission Against Corruption. However, nothing further has been heard on the matter.

The WHO response in full 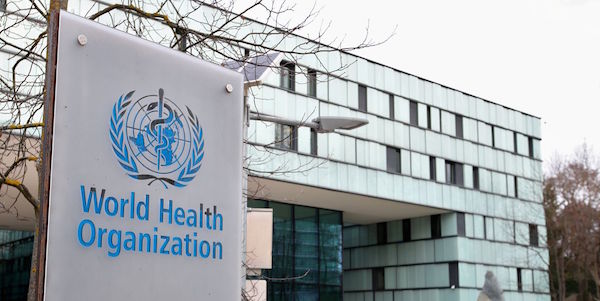 When PNGi reached out to the WHO in PNG for comment on the allegations contained in Manning’s keynote address and elsewhere we received the following statement from the WHO Regional Office for the Western Pacific.

Since the start of COVID-19, WHO has worked closely with the Pandemic Controller, the National Control Centre (NCC), the National Department of Health (NDOH) and other partners to support Papua New Guinea’s response. We remain absolutely committed to working with the Government and partners in implementing a robust response.

This includes advice on public health and social measures, expanding health system capacity including through facilitating the deployment of multiple Emergency Medical Teams (EMTs), support for scaling up surveillance, testing, reporting and contact tracing, securing doses and rolling out COVID-19 vaccinations, and communicating with health workers and communities to understand their concerns, explain the risks of COVID-19 and how to protect themselves and others through vaccination and adherence to Niupela Pasin measures.

The current surge of cases has impacted communities across PNG, causing illness and deaths, placing significant pressure on the country’s hospitals and health resources, and causing significant social disruption. WHO staff across the Western Pacific Region are working as one, around the clock, to support countries including PNG to minimize death and social disruption from the pandemic. The PNG Country Office team, including Ms Maalsen as acting WHO Representative, are playing an instrumental role in these efforts and will continue to do so to support the PNG response going forward.

The full 11 minute Keynote Address given by David Manning at the Regional Forum on Law and Covid-19 hosted by the University of Melbourne on November 3/4, 2021.

Over the past four years PNGi has published more than twenty investigations and articles on the corruption and mismanagement in PNG’s health system. It is a body of work that paints a grim picture of the failings that continue to exact a terrible toll on the nation’s most vulnerable citizens.

Profiting from Sickness: The Dark Economy of Public Health in PNG (Part 1) – 4 Sept 2017